Several videos have been released of a heavy artillery team firing hundreds of shells. One of the cameramen was Graham Phillips filming an event on September 19th.
It had never been possible to geolocate them until now...

Here are the videos.

The bald guy walking around in a camera must be Graham: 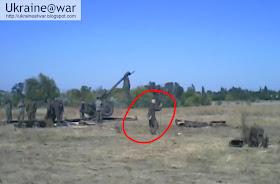 Video #2
This is Grahams own video published on his Youtube channel:


Video #3
Another video from Graham:

This video is very similar.

Video #4
This is a news item with another 'journalist' reporting about it. Also published on Sept 19th.

Another one asking some questions.

Video #6
This one is especially lurid (knowing that they are shelling Ukrainians villages here):


Video #7
A video from yet another cameraman, who holds his camera on a pole to film from a higher position:


This video is from Sept 22th, This man uses some images of Graham in his video. It means he took some time to edit his video before uploading it.

Note how in the end of the video they shout "Allah Akbar" which can be heard all the time in many videos. 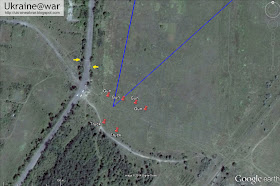 The yellow arrows show roadblocks on the August 1st satellite image of Google Earth. It means this location is definitely used by the TerroRussians.
The blue lines indicate the approximate line of fire of the guns.
Parked cars can be seen at the road, exactly as in the video: 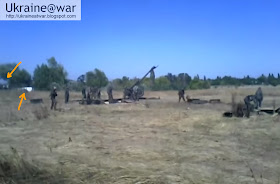 Houses between the trees can be seen in the distance: 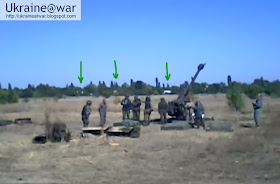 which correspond with the village seen on the map (green circle): 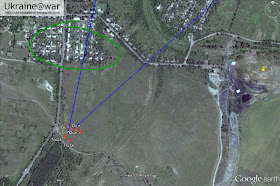 This screenshot from the first video: 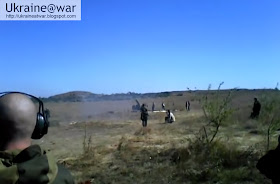 shows a hill/terikon, which can also be seen in this Panoramio photo: 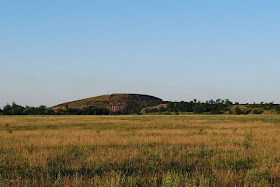 Now, when we look on a larger scale on the map, we see this: 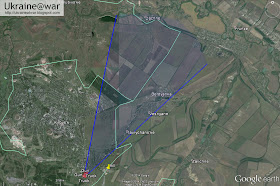 The blueish area indicates a range of 8kms, showing that the two villages Dachne and Frunze are well within range and the likely/possible targets.
According to Wikipedia these guns have a range of 15 kms.


On this situation map of September 17th it can be seen that this entire area was NOT IN CONTROL by Ukrainians: 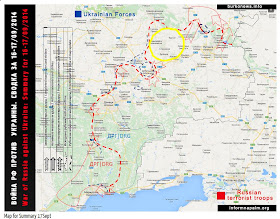 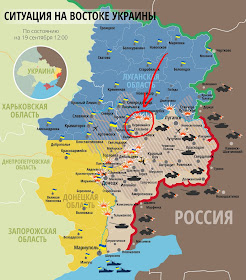 It shows exactly two explosion icons north of Stachanov were the villages of Dachne and Frunze are.
This map DOES show some area North of that to be in control of Ukraine, but these official ATO maps are known to be rather optimistic and they often lag behind a couple of days when it comes to indicating the front line.

Conclusion
The ATO map likely shows exactly these two villages being bombarded. The more reliable Burkonews-map shows the entire area was not in control of Ukraine even two days earlier already!

It looks like Graham Phillips (among other videographers) have been documenting the shelling of villages by (pro)Russian forces, which is a warcrime. Documenting warcrimes and not reporting it is a crime too.

This was also the case with Andrey Stenin, who was witnessing and partially documenting warcrimes and later had been reported to be found dead in a burned car in suspicious circumstances.