EVERYTHING you EVER wanted to know about Russian Generals in Ukraine

A Tale of Two Russian Generals
The small Ukrainian Armed Forces checkpoint at Buhas on the H20 highway 2 km north of Volnovakha is now infamous due to a GRAD rocket strike there on 13 January 2015. (Another infamous attack happened near Volnovakha on 22 May 2014.) Ten civilian bus passengers were killed instantly, another two died later in hospital, and another 17 passengers were injured according to the OSCE Special Monitoring Mission to Ukraine (SMM) [source].
However, the subsequent visit to the site of the Volnovakha bus massacre by a SENIOR RUSSIAN OFFICER tells its own tale.


A site inspection was organised by SMM on January 16th. This involved a ‘joint investigation’ by representatives of the Joint Centre for Control and Co-ordination (JCCC): a Ukrainian Major-General, his Russian counterpart, and members of the so-called ‘Donetsk People’s Republic’ (DPR).


It is the presence of Major-General Alexander (or Aleksandr) Yuryevich Vyaznikov that concerns us.

What is the Commander of Russian Federation forces in the occupied Donbas region of South-East Ukraine doing 65km from the Russian border, inside Ukraine? The Buhas checkpoint lies 7 or 8 km from Novotroitske: the nominal contact line between Ukrainian defenders and the Russian invaders and their DPR militia, southwest of Donetsk city. This may not sound far. But in terms of ‘military diplomacy’ the presence of Vyaznikov on Ukrainian soil at all, let alone across the contact line, is alarming.

The JCCC headquarters (HQ) is in Debaltseve, 55 km northeast of Donetsk city. The Ukrainian and Russian military staffs are each led by a senior officer, selected by their respective General Staffs in Kyiv and Moscow. These two Chiefs of Staff or ‘representatives’ at JCCC HQ are military negotiators with considerable power to make decisions concerning the so-called ‘ceasefire’ and the ‘buffer zone’ that extends 15 km each side of the agreed contact line between opposing forces. They are in effect the senior military commanders on the ground.
We now focus on the Russian representative.

When the JCCC became operational on 26 September 2014*, the first Russian representative was Lieutenant-General (2 star) Aleksandr Ivanovich Lentsov. We mention him because, as you will see, there is a pattern.


Briefly, Lentsov is a veteran of the Soviet war in Afghanistan and the Chechen Wars [source and source]. In the First Chechen War, he earned a reputation as a hardcore Colonel commander of tactical groups of Russian Airborne Troops (VDV). Subsequently promoted to Major-General (one star), Lentsov then commanded a Russian peacekeeping brigade of 1,500 paratroopers (drawn from 76th and 98th airborne divisions) in Bosnia in 1996 [source and source]. Lentsov was given command of the 98th Airborne Division (Ivanovo).

For example, in Donetsk on 22 November they discussed options for de-escalation of the situation at Donetsk airport and the use of UAVs [source]. At other times Lentsov met with members of either DPR or LPR without the Ukrainian representative (e.g. in Luhansk on 3 December [source].

(At the end of November 2014 we received rumint that Lieutenant-General Lentsov was saying the so-called ‘Army of Novorossiya’ is a piss-poor militia that should be replaced by Russian Ground Forces contractors.)

But as we know, while these meetings involving one of Russia’s most senior military officers were taking place, Russian military equipment, troops and supplies destined for pro-Russian militias CONTINUED TO FLOOD across the border into Donbas throughout October to December. It is absurd to think that Lentsov (and Russian General Staff back in Moscow) was ignorant of these efforts to support and strengthen the Russian military occupation.

On 8 December at JCCC HQ, Askarov, Lentsov, Denis Pushilin (DPR) and Aleksandr Shubin (LPR) signed orders to implement a general ceasefire to start 09:00 hrs on 9 December [source]. On the day of the ‘ceasefire’ the same signatories were instructing their JCCC officers to follow up on numerous reports of ceasefire violations! [source].


From 16 December, as part of the rotation of officers in the JCCC, the head of the Ukrainian side, Askarov, was replaced by Major-General Aleksandr Razmaznin, Deputy Head of the Joint Operations Centre of the Armed Forces of Ukraine; and the head of the Russian Representation to south-eastern Ukraine, Lentsov, was replaced by Major-General Alexander Vyaznikov, Deputy Commander of VDV peacekeeping operations and the Collective Security Treaty Organisation’s (CSTO) Collective Rapid Reaction Force (CRRF) [source]. At this juncture, Lentsov was rotated back to Moscow and promoted on 13 December to Colonel-General (3 stars)**.


At first, it would appear that Lentsov was replaced by a lesser-rank officer (a Major-General). At the time, some commentators said it indicated that Russia’s Minister of Defence, General Sergei Shoigu, and General Staff were downplaying Russia’s representation in the JCCC. The alternative view (and hindsight) is that Moscow decided on a change of emphasis: less negotiation and more operational cover for covert Russian military activities in Donbas.


In reality, Vyaznikov is a specialist: ideally suited (more so than Lentsov) for Russia’s operations in Donbas – and potentially beyond. Who is this Vyaznikov, and why is he so important?


Vyaznikov first came to our attention in August 2014 at a time when it looked as if Russian General Staff were preparing to send a large contingent of Peacekeeping Forces (MC) to ‘keep and enforce the peace’, in other words occupy, Donbas.
On 24 May, Vyaznikov told Anna News that Russian peacekeeping troops were ready to enter the territory of Ukraine. “If we receive an appropriate order, we are ready to carry it out”, said Vyaznikov [source]. On 22 August 2014, TASS reported that Russian VDV had completed the formation of a 5,000-strong peacekeeping force under Vyaznikov [source]. 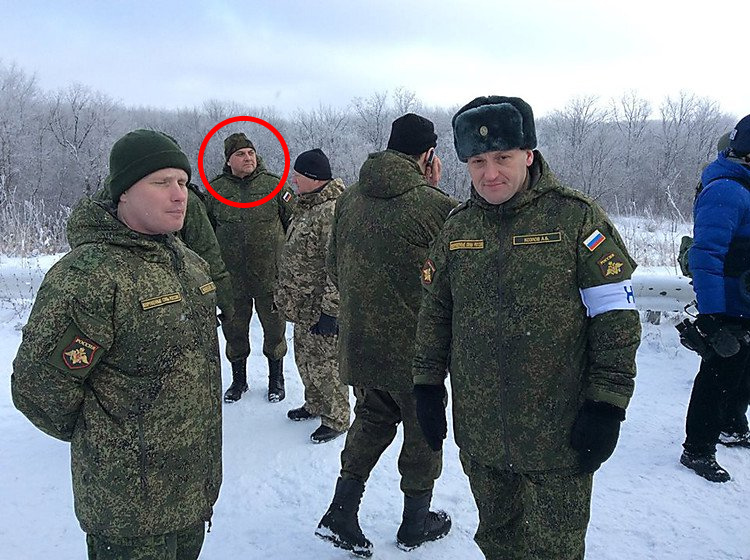 
Vyaznikov is a veteran of the First and Second Chechen Wars. He gained a reputation as an effective ‘assault and occupy’ combat leader. In 2008, Colonel Vyaznikov was Commander of the Tula Division or 106th Guards Airborne Division [source] before moving to command the 7th Guards Air Assault (Mountain) Division. Around 2009-2010 Vyaznikov was instrumental in reforming the VDV [source]. He gained a reputation as a moderniser with a strong focus on maximum combat training [source], which lead to promotion (2011?) to Major-General and appointment in 2013 as a Deputy Commander of both VDV Peacekeeping Operations and the Russian-led the CSTO CRRF [source]. In November 2014, Vyaznikov led ‘Srem 2014’, a joint exercise between Russian airborne troops and Serbian special forces [source]. From this advanced combat exercise involving cooperation and coordination between Russian VDV and ‘allied’ forces (for that substitute DPR/LPR militias), Vyaznikov moved to JCCC HQ in December.


On their first day at JCCC HQ, Vyaznikov and Ukrainian representative Major-General Razmaznin said their focus would be on fact-finding regarding ceasefire violations [source]. Since then, the working relationship between Ukrainian and Russian representatives at JCCC has been ‘matter of fact’. Vyaznikov has a reputation for professionalism but difficult. For example:

According to SMM, on 19 December Razmaznin announced that all JCCC members would be fully ready to launch joint patrols across all DPR and LPR-controlled territories by 28 December [source]. However, on 25 December – three days after speaking at LPR press conference in Luhansk [source and source] – Vyaznikov announced that the Russians would not take part in joint patrols. Instead, Vyaznikov suggested the Ukrainians should carry out joint patrols with DPR and LPR militias [source].

But recent events on the ground in Donbas and at Donetsk Airport speak volumes about what Major-General Vyaznikov has really been doing since his arrival at Debaltseve.


On 22 December we stated that Vyaznikov is not in South-East Ukraine to negotiate; he is there to plan assault operations and the occupation of Donbas. On what basis? Although The Russian Ministry of Defence maintains that Vyaznikov is a ‘peacekeeper’ who is in JCCC to ‘negotiate’, Vyaznikov’s entire professional career is that of a hardcore airborne assault leader. The fact that he is entrusted with responsibility for the CSTO’s Collective Rapid Reaction Force speaks loudly. Vyaznikov is a specialist in airborne forces combat tactics and logistics, peace-enforcement operations (i.e. violent suppression of forces) and interoperability operations (i.e. between VDV and special forces and/or marines and/or militias). A dangerous skill set, for an alleged negotiator.

On 22 December we stated “There’s only one reason Russian MoD puts someone like that as head of Russian Occupation Forces”. Vyaznikov is a ‘seize and hold’ tactician. He’s the kind of hardcase commander needed for the job of taking territory, holding it, organising supporting fire and logistical support, and extending Russian military authority over local militias. All of these things have happened in Donbas on Vyaznikov’s watch. From the consolidation of Russian Forces’ occupation, elimination of troublesome (uncontrollable) militia commanders, advancing across the agreed contact line to seize more Ukrainian territory south of Donetsk, to the recent and ongoing assaults to occupy Donetsk Airport. Vyaznikov is definitely on the ground in Russian-occupied Donbas to prepare for (more) war. Vyaznikov is anything but a forces’ withdrawal specialist (Yes, there are such things!) and peace negotiator.


Conclusion
Major-General Alexander Vyaznikov, Deputy Commander VDV and CSTO Rapid Reaction Force, is the senior Commander of Russian Federation forces in the occupied Donbas. He has authority over all Russian units in South-East Ukraine, including the pro-Russian DPR and LPR militias. No GRAD MLRS or D-30 howitzer is loaded and fired at Ukrainian positions without his knowing it or his say-so. If Vyaznikov wanted Russian artillery to stop firing on Donetsk Airport, it would stop. That’s why we became very angry when we saw a photo of him standing with Russian troops ‘inspecting’ – under OSCE monitors’ noses – Ukrainian supply trucks on their way to resupply the Cyborg defenders at Donetsk Airport. But even angrier when we see Vyaznikov ‘inspecting’ the site of the Volnovakha bus massacre on 16 January.
HE HIMSELF... has responsibility for the GRAD rockets fired from Russian-occupied territory that killed those innocent civilians.


When all is said and done, Vyaznikov may be rotated out of JCCC and replaced with another Major-General. One thing is certain: there are plenty more Russian VDV commanders with long experience in assault and occupy operations. Mariupol is the next one to watch.


* The JCCC was established on 20 September 2014 in Debaltseve by Ukraine’s Ministry of Defence in cooperation with Russia’s Ministry of Defence. It is monitored by OSCE. The JCCC works on ‘issues related to the ceasefire regime and the stabilization of the situation, with the participation of representatives of Ukraine, the Russian Federation and the OSCE’ [source].
The aim of the JCCC is (or rather was) to ‘promote a further de-escalation of the situation in the region of Donbas and ensure the effective control and verification by the OSCE of the existing agreements on compliance with the cease-fire regime, the withdrawal of illegal armed formations and their equipment from the territory of Ukraine, as well as the establishment of an effective control over the Ukrainian-Russian border’ [source].
This being part of the Minsk Protocol of 5 September and Minsk Memorandum of 19 September 2014.

** On 18 December 2014, newly promoted Colonel-General Lentsov was approved by Putin as a candidate to command either a Russian Military District or unified strategic command in future.