Ukrainian Security Service released three videos with english subtitles of the Russian Spetsnaz soldiers captured near the town of Shchastya, while they were trying to sneak into Ukrainian positions they thought were abandoned.

Here they are with the translation typed out.

Since when have you been in the ATO-zone (Anti Terrorist Operation)?
Since March 6th

What area did you operate in?
Town of Shchastya

How many men were there in your group?
14 men

What where their last names?
The commander is Erofeev, his deputy is Azimov.
etc...

Have you been physically coerced [to talk]?
No, I haven't.

What;s your regiments motto?
Any time, any place, any mission.
That's the military intelligence motto.

How many groups do you know to be working in this area?
4.

We mean specifically groups of Russian soldiers. How many groups are working in Shchastya area?
There is one group we rotate with at Shchastya.

Any other groups working in this area?
In neighbouring areas.

Others?
I don't know any others.

You don't know your mission either, right?
Observation.

What was your latest order?
Move out and observe without crossing the contact line.

How did you get wounded? What was your specific mission?
Move out and observe.

What happened next?
We came closer and were spotted.
As we were pulling back, I got wounded in the leg.

Have you crossed the contact line?
No, we did not.

Once again, tell us your specific mission.
To observe and report results.

How many men were there in your group?
14

For how long do you come here, do you rotate or is this your constant location?
For 4-5 days.

Then you get back to your permanent base?
Yes, to the city of Luhansk.

Do you arrive here on vehicles?
Yes.

What vehicles?
A Ural truck.

Where's your brigades permanent base?
City of Togliatti.

Describe your contacts with the locals on your side of the line.
We do communicate.

Do you get information of them?
We get no information from them, we get it from the rebels.

Describe your contact with the so-called 'rebels'.
We just have contacts.

Do you have orders not to contact them?
We do communicate, but we have no joint operations and we don't tell each other about our missions.

I take it your unit is autonomous and does not cooperate with anyone?
Right.

How many groups do you know to be operating out of Luhansk?
6 or 8.

Do you know any last names of other groups members?
...

Also an autonomous group member?
Yes, he is a section commander.

Where is that group operating now?
It's currently staying in Luhansk.

Where did it operate before that?
Stanitsa Luhanska district.


I am Aleksandrov Aleksandr Anatolievich, born on January 7th, 1987, citizen of Russian Federation, reside at the address: Kirovsk region, Malmyzhskii district.
I am an active duty military of the Russian Federation.
Military rank: sergeant
Position: recon agent/paramedic.
I serve at the military unit #21208, the 3rd Guards Separate Special Purpose Brigade, based at Tolyatti city. The brigade commander is colonel Shchepel Sergey Anatolievich.

The mission assigned to us was to keep the Ukrainian troops under surveillance.

What was the place of deployment in Ukraine?
Oktyabrsk district of Luhansk city.

On the day we were detained the chief of group assigned a task to conduct supplementary terrain reconnaissance in the area of a bridge just outside the Shchastya town. When we moved there and took up positions, we detected a fortified area and started to surveil the area, the two of us, for about an hour. As we noticed no signs of movement or life of Ukrainian troops, we decided to move closer. Having moved closer, we proceeded with observation for some time. Having detected no Ukrainian troops, we decided to move as close as possible, as we decided that this fortified area had been abandoned or people left for another area. When I got to a trench, I went to examine a dugout. 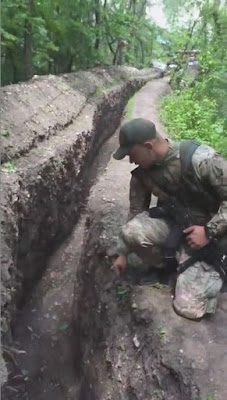 Captain Yerofeev and corporal Krasnov watched my back. When I heard shooting, I turned around and saw a wounded Ukrainian soldier on the ground. Then we received a Retreat!-order, so we ran. We ran about 15-20 meters and I fell, as I was directly shot in the leg - hip fracture. I crawled away as far as I could. I crawled about 50 meters away, took position in a trench and decided to give myself first aid. While I was giving myself first aid, I was detained by militaries of the Ukrainian army.

What is the ID information of the brigade commander?
Lieutenant colonel Shchepel Sergey Anatolievich. I moved into Lugansk region in early April, I don't remeber the exact date, as part of the 2nd squadron of the 3rd Guards Separate Special Forces Brigade. The acting squadron commander is major Napolskikh, a citizen of the Russian Federation a serviceman.
We were assigned with a task to conduct the reconnaissance by observation of the forward line of adversary troops and elements deployed nearby - units of the resistance naad Cossacks.
The squadron is deployed in Lugansk city. I don't remember the exact address, but it is a private residences area close to the Vavilov quarter.
The squadron comprised three companies, with four groups in each. My group consisted of twelve men: myself - group commander, deputy group commander, two section commanders, two snipers, two machine-gunners, two combat engineers, two reconnaissance agents, two senior reconnaissance agents. All are citizens of the Russian Federation.
The mission was to conduct reconnaissance by observation, with at that time order not to cross the contact line, not to open unnecessary fire. Due to the persistent shelling of the positions, I decided to change position and move forward in a group of three in search for a new position.
In the course of searching for new positions, I stumbled upon old trenches and surveilled them. The trenches seemed to be abandoned. We decided to examine them. I ordered two men to check the trenches. I stayed to watch their backs.
When the militaries entered the trenches, the slaps followed and then - they are running shouting Retreat!. We started to retreat when they opened fire at us. I got gunshot wounded into the hand, a comminuted fracture. I fell down and fainted for a while. When I was up I started to crawl, I didn;t creep far away - Militaries came from the trenches. They didn't kill me; they detained me and rendered aid. And now I'm here.

When I was detained, frankly speaking, I thought that they would kill me at once. I wanted to blow myself up with a grenade, but the right hand would not obey, I couldn't reach it. I failed. I could not reach it with the left hand either.
While I was doing that, militaries came from the trenches and detained me. They put me in a stretcher and carried me away. I was taken to a hospital in Shchastya. I was given first medical aid there.

Does that what they say to you on TV in Russia correspond to the reality?
A lot is told on TV. We don't watch everything and don't listen to everything either. I think no one needs this war. While the top circles are skimming the cream, the lower are choking with blood.

Conclusion
This is an excellent example of how Russia's Hybrid Army in Ukraine works. beside the so-called 'militias' which are basically mercenary groups, it also consists of independent Special Forces Units from the 'official' Russian Army that operate autonomous with special tasks.

While these guys say they did not cross the contact line, they obviously did. And while they say they had to observe, they clearly intended to occupy new/abandoned territory. Probably to set traps, lay mines or to ambush Ukrainian troops.

This is the location where they have been captured: 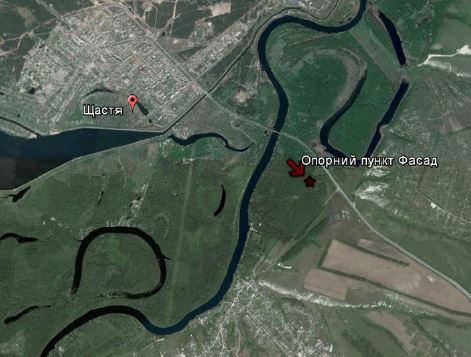 While they talked about a Ukrainian soldier getting wounded, in fact they killed one:

Yerofeev says he was afraid to get killed, so he wanted to kill himself with a grenade. That doesn't make sense. Likely he wanted to defend himself by throwing a hand grenade.

The other Russian POW is badly wounded and gets medical help. (Russia tortures and executes POWS!). pic.twitter.com/HeCr2Z2ONh via @HetmanAndrij
— Ukraine@war (@DajeyPetros) May 17, 2015

While these Russians get medical help, the Russian themselves kill Ukrainian POWs!


UPDATE 2-6
A video taken with the phone of Alexander Alexandrov, full picnic of Russian Spetsnaz on Ukrainian territory: