Why RUSSIA shot down MH17 and not 'local separatists'

First of all: the war in East-Ukraine is a Russian operation with the help of some local recruits. See this blog. But apart from that, the BUK did not operate alone...

The SA-11 GADFLY BUK-system consists of four components:
You can see each of them here: 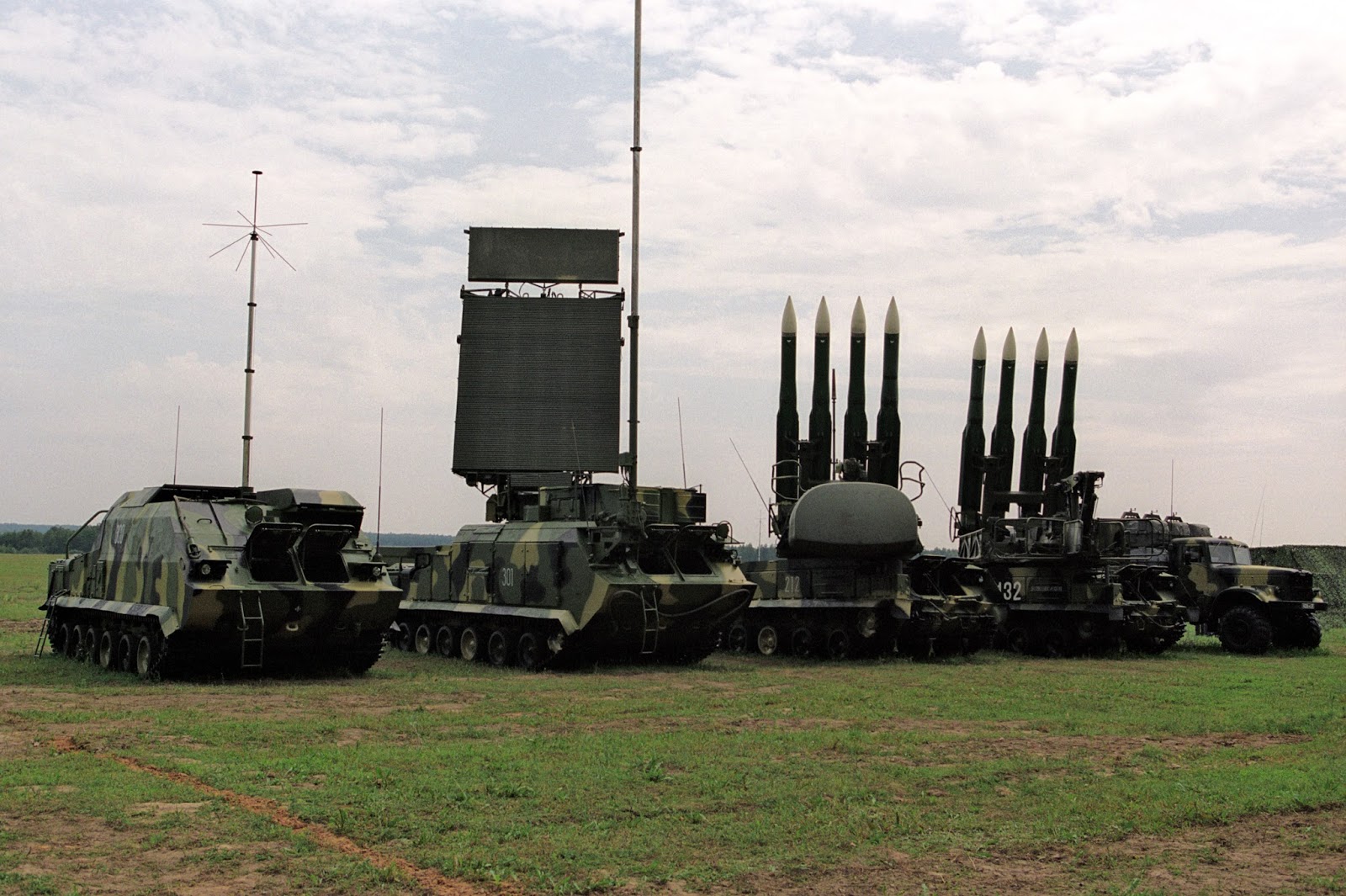 C2 Snow Drift Radar
The Snow Drift Radar has an effective range of 85 kms. It can communicate with and control up to six TELs/LLVs and as such launch and direct the missiles to the target. The other units must be in range of max 40-50 kms, but at this range weather and geographical conditions or jamming may play a bigger role, so a more effective and reliable range would be 20-30 kms between the different units.

TELAR
The TELAR has the ability to launch independently from a C&C. It has a semi-active FIRE DOME radar. The radar sends a signal. The reflection of this signal is captured and based on the time, angle, etcetera, the height, range, speed and behavior of the plane is calculated. These are then send to the rocket. The rocket itself does not have radar.
The Fire Dome radar has a range of 32 kms, the same as the missile range.
The TELAR also has an electro-optical guidance system, which is only being used when the the radar is out of use because of jamming for instance.

LLV
The launcher has four missiles and since these missiles cannot be loaded into the system manually, a separate loader vehicle with a crane can both transport missiles, load them unto the launcher, or even shoot them when controlled by a C&C.


Every radar has a friend-or-foe recognition system (IFF).

Here you can see how the four components are working together: 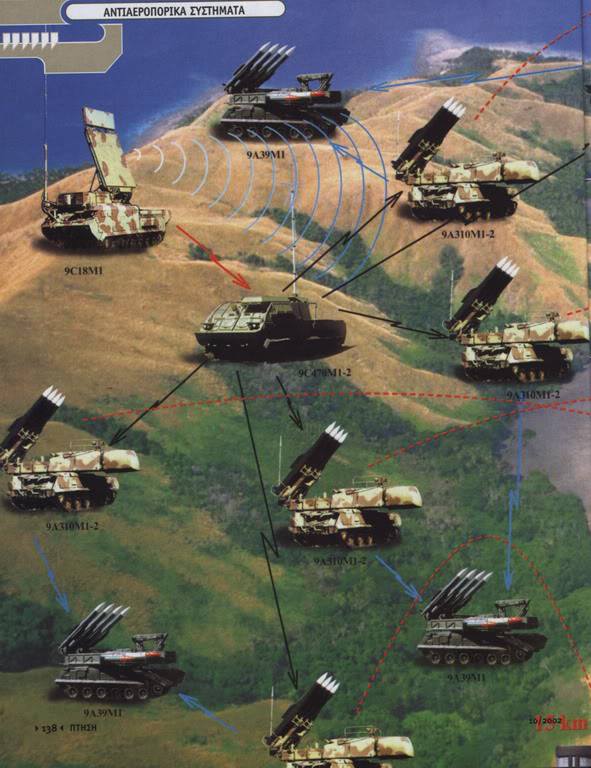 Question: Does Russia have these units deployed along the border with Ukraine?
Answer: well of course!! They also used one two days earlier...

AN-26 brought down by BUK two days earlier
Two days prior Russia had been bringing down a Ukrainian AN-26 transport aircraft with a BUK missile. That was the first time they used a BUK in the war with Ukraine.
In this blog I calculated where the BUK must have been located that fired that missile.
Drawn on a map it looks like this: 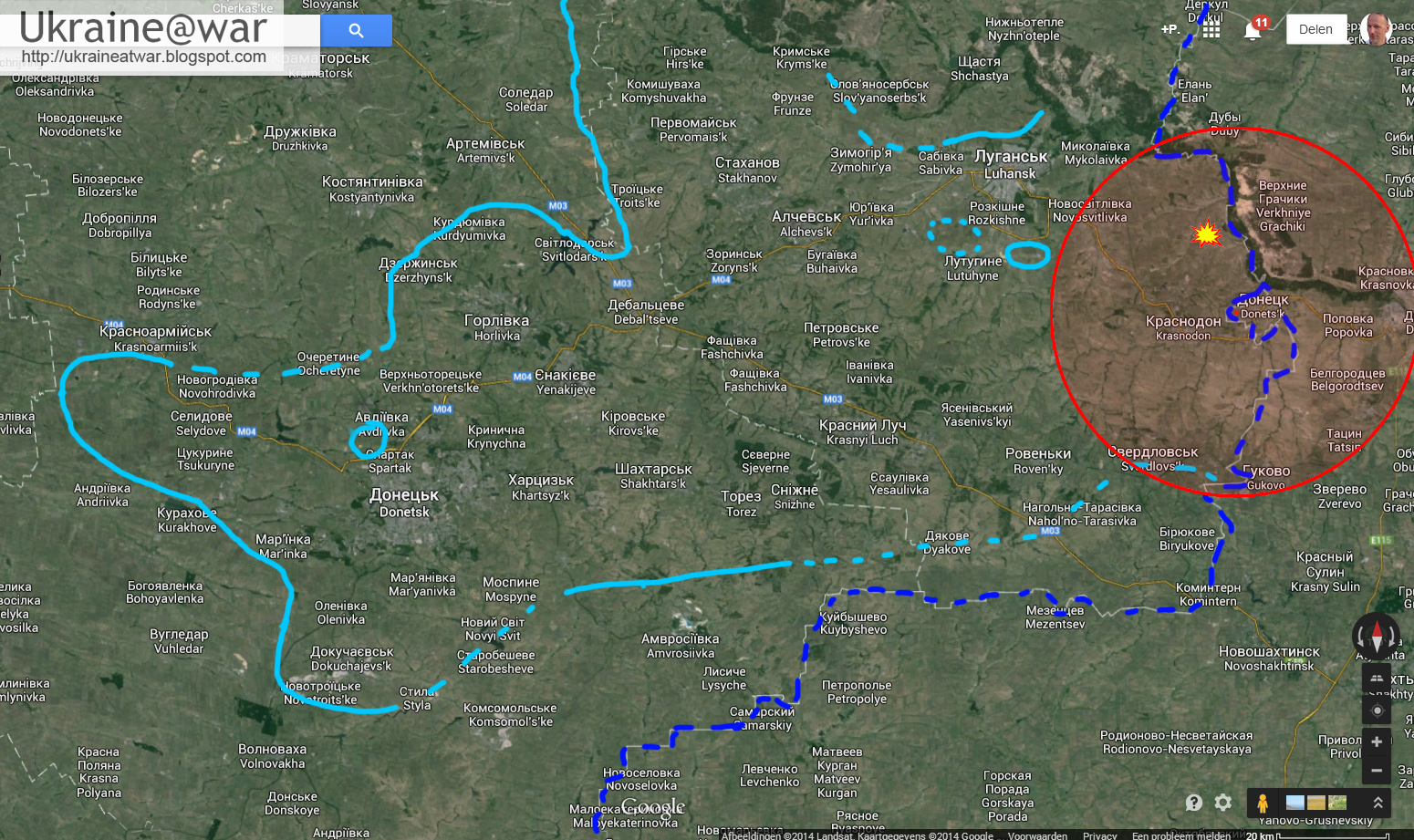 Another thing is that we know from all kinds of sources that Russia has units all along the border with Ukraine and is even ATTACKING Ukraine across the border.
All red dots on this map are CONFIRMED locations of Russian units and/or attacks: 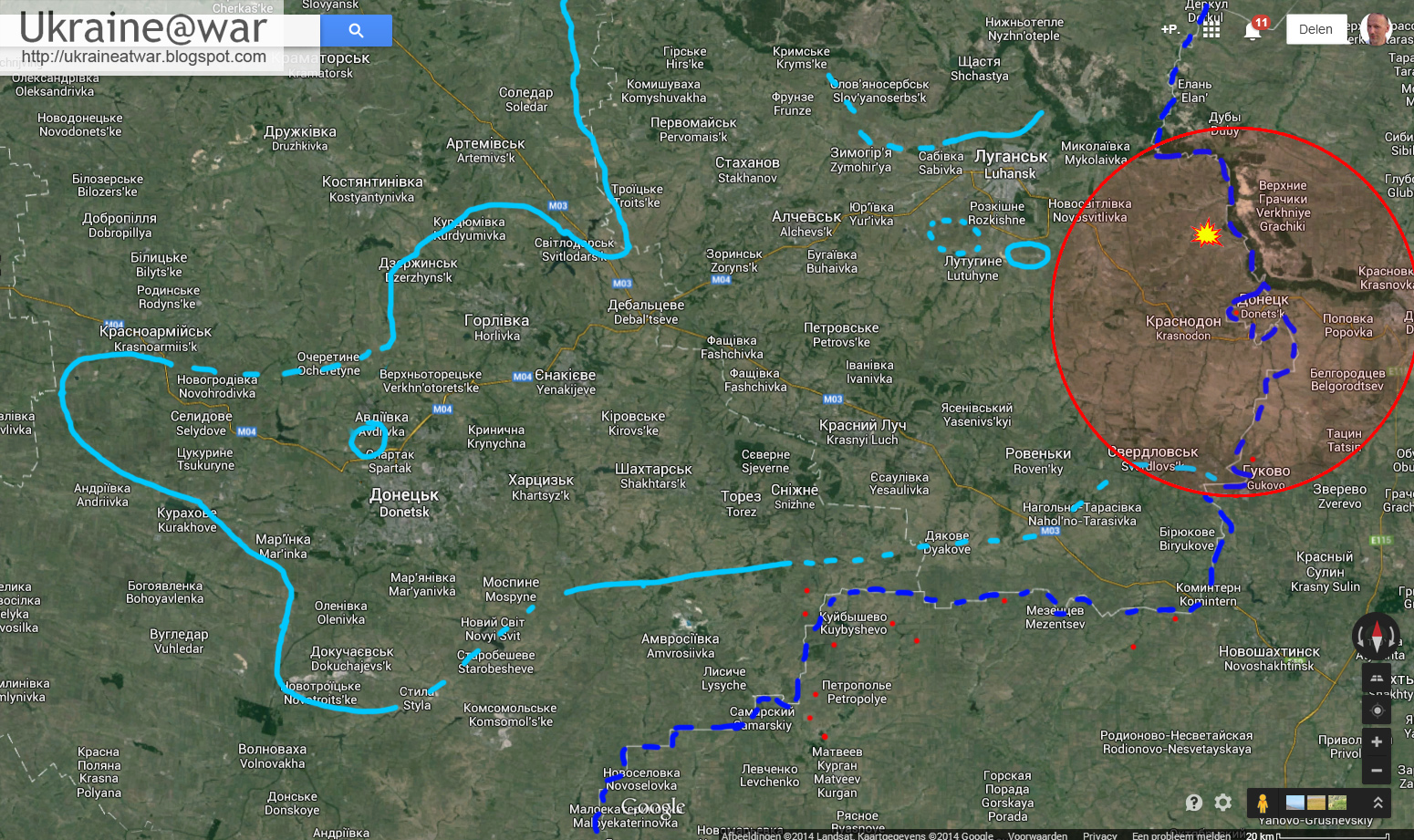 Did we spot and locate any of the BUK units alongside the border?
No, but we know that they are there, because:

What would be good locations to position BUKs along the border?
You only need three more TELARs to cover ALL of the border where fighting is going on, like this: 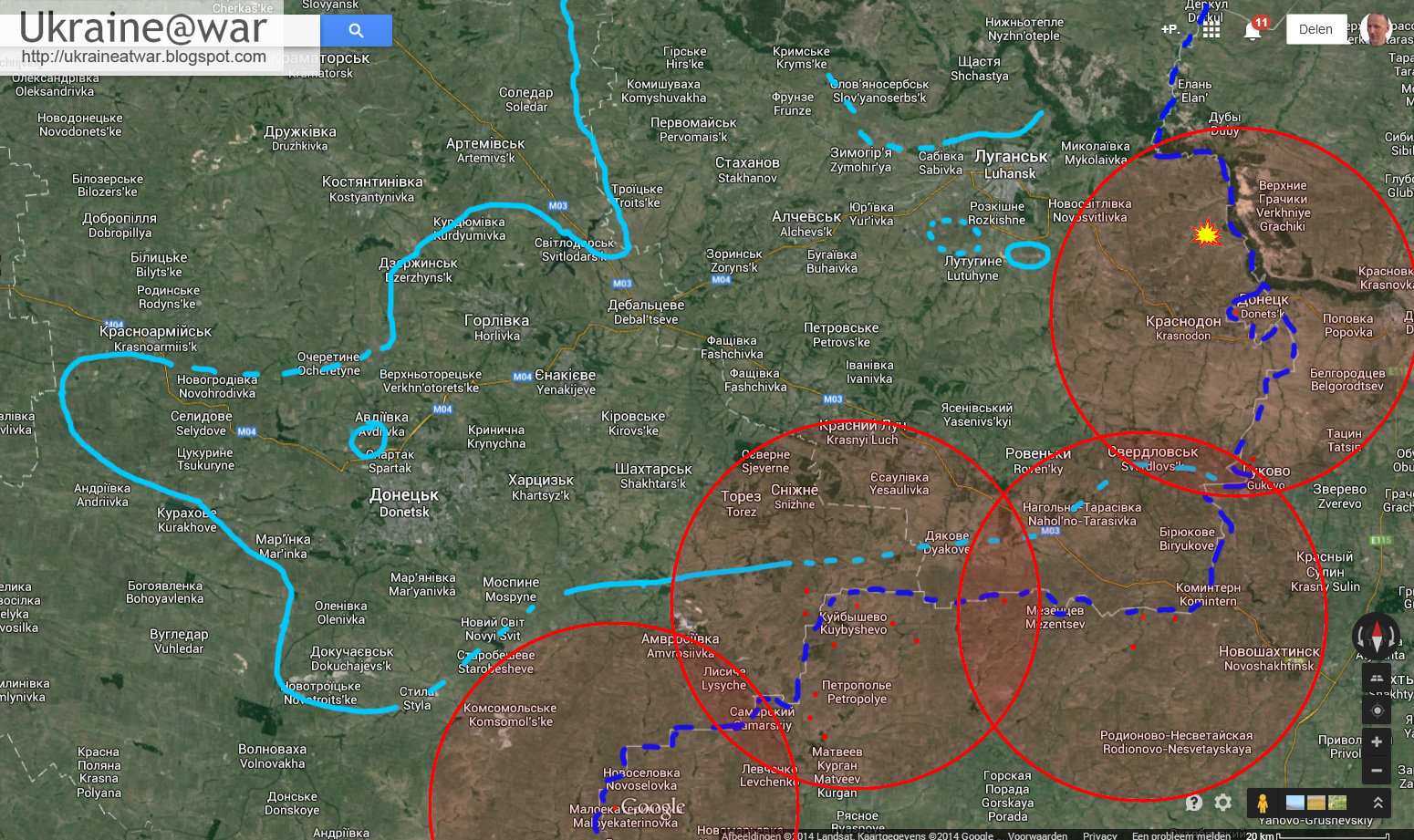 The most important location is this one: 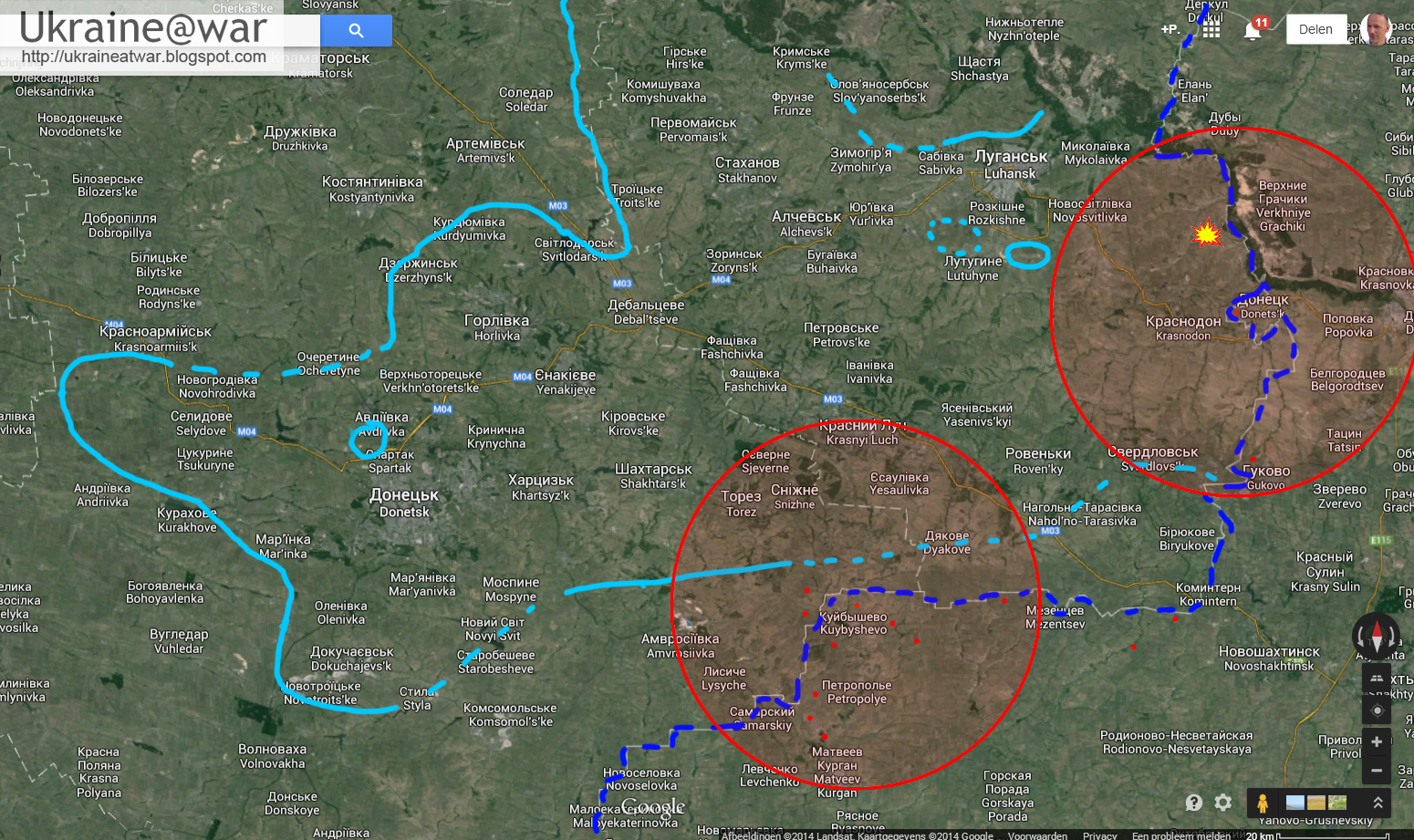 Because it covers the route of Ukrainian aircrafts to the units at the border. And Russia was and still is trying to cut off these Ukrainian units at that particular location.
This is the best spot to put a radar unit: 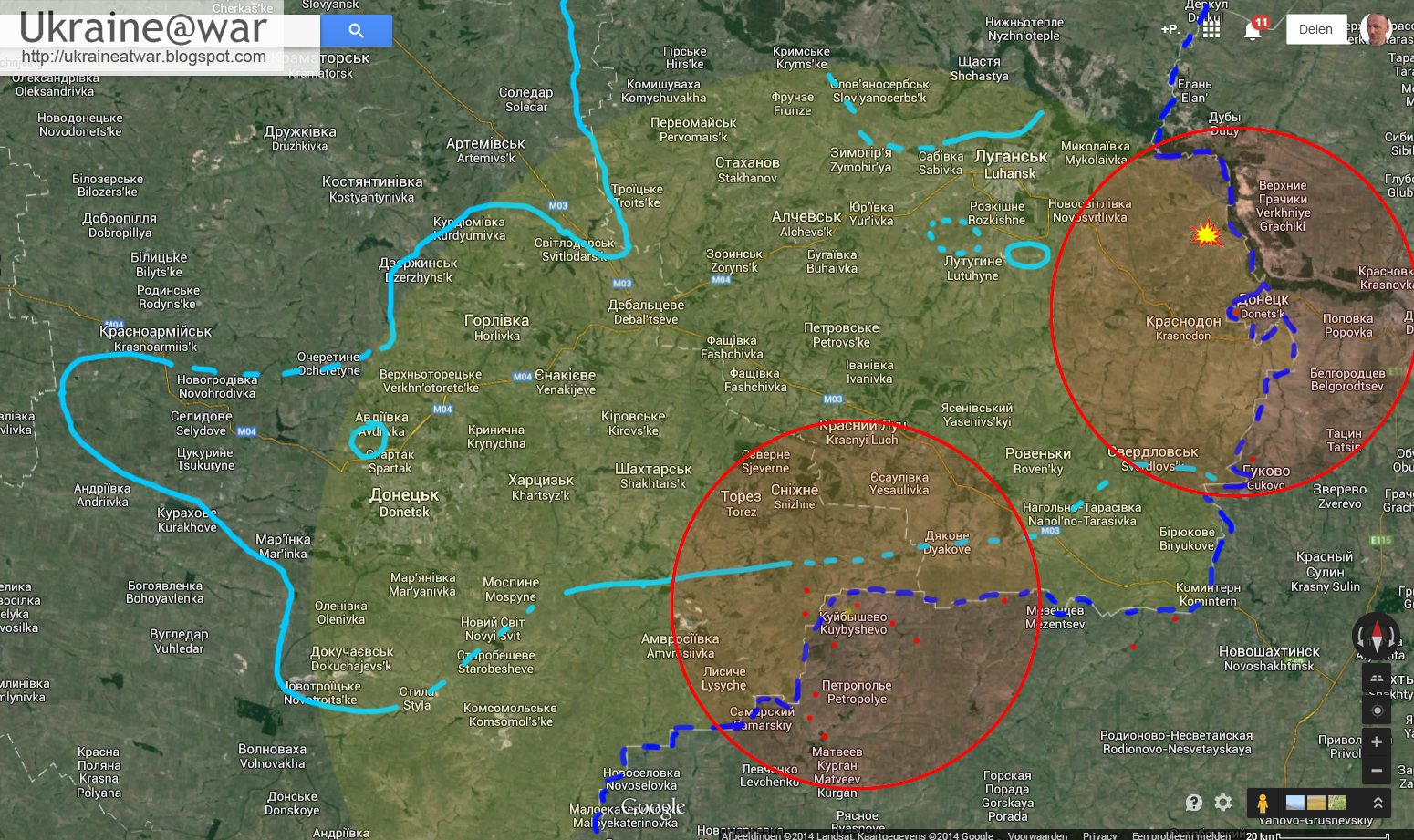 One radar unit at this location covers almost ALL the Russian occupied area. Except for the Western most part. This is where they had positioned a Strela-10 anti-air unit with 5 km range: 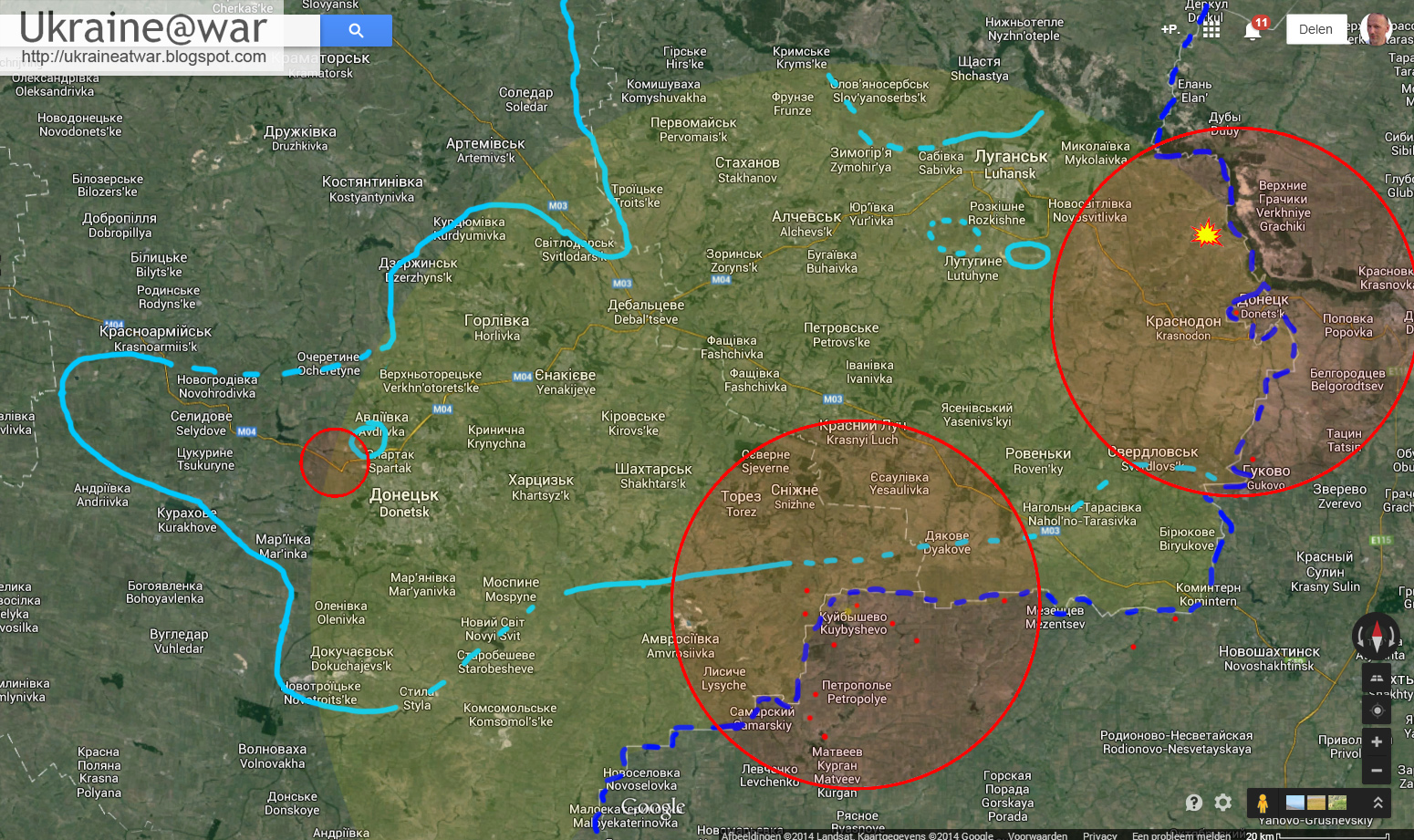 The BUK that brought down MH17
In the night and morning of July 16th to 17th Russia drove one BUK-M1 all the way into Ukraine like this yellow route (see this blog): 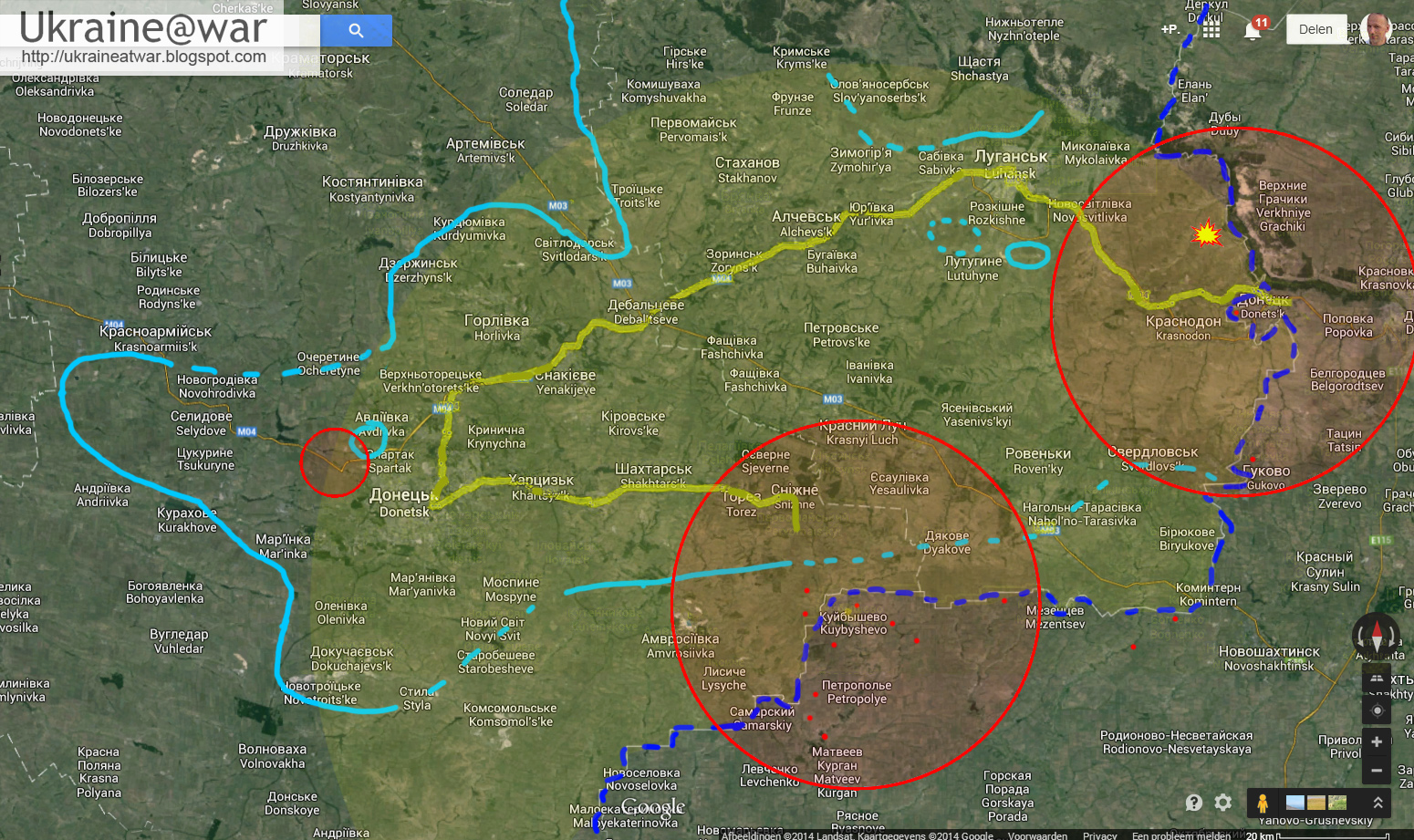 And what do they do? They POSITION this unit WITHIN the operational communication range of a radar unit across the Russian border: 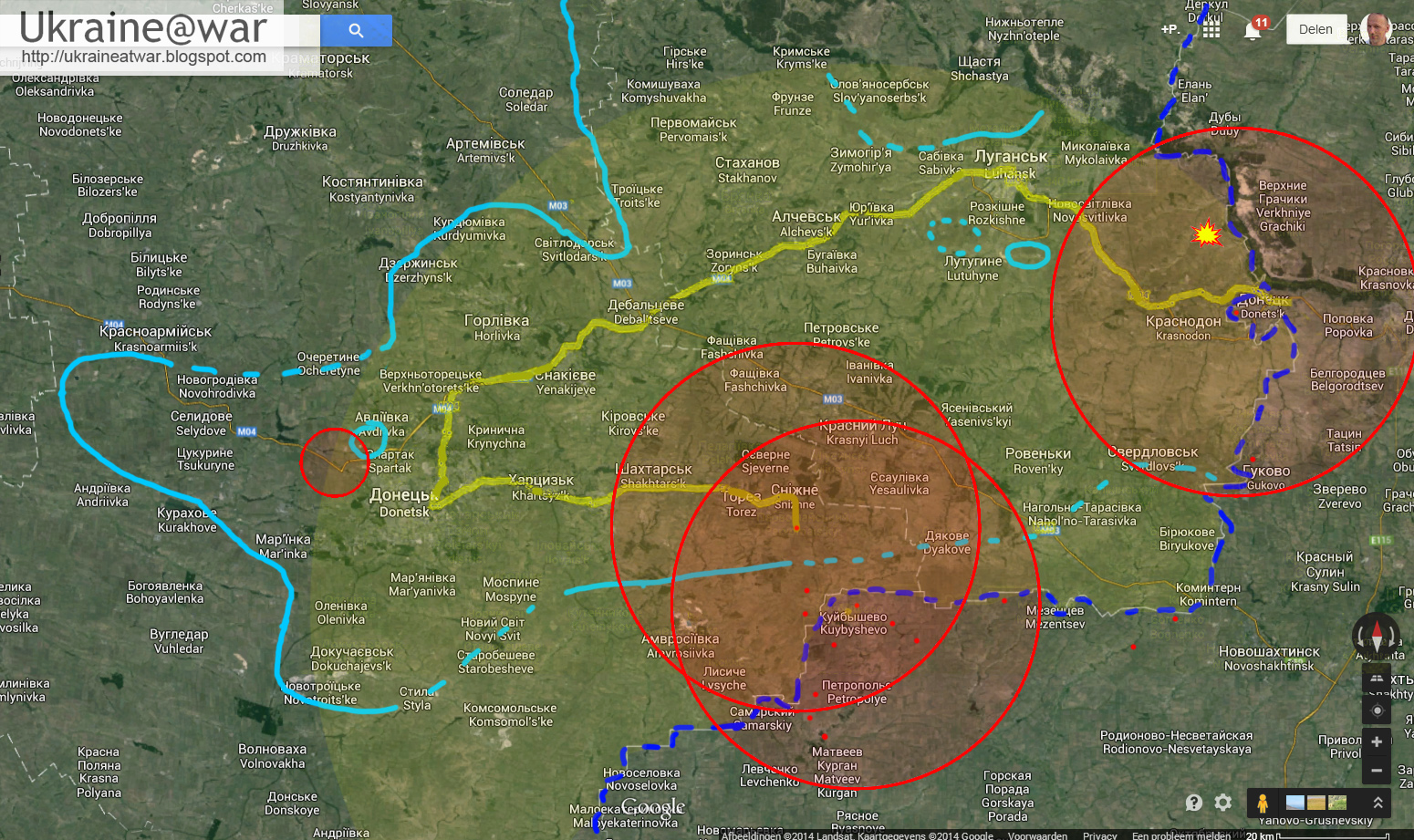 It means the BUK COULD easily connect with a radar unit there. Then the next question is: why should it NOT connect?

Another question is: WHY would they drive the BUK all the way WITHIN operational range of a radar unit, while they could easily have a BUK on Russian territory with approximately the SAME effective coverage of Ukrainian area along the border?
If the BUK was intended for 'offline' use, why drive it within range? Why not position it in Donetsk, so there is a lot more area to cover with air-defense? Like this: 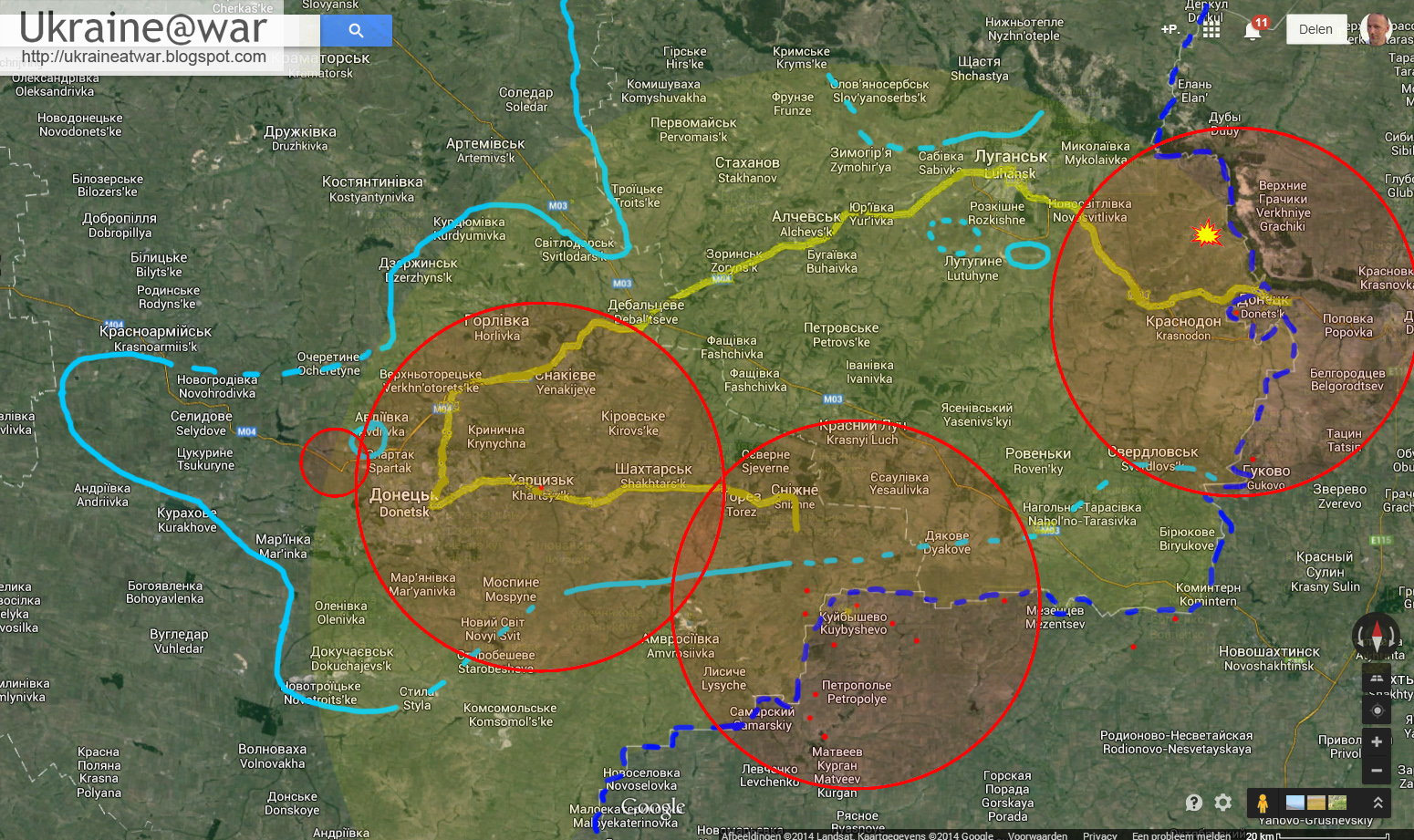 The answer is simple: OF COURSE they wanted to connect with the radar and command and control located in Russia...

Another thing
We know that in the week after MH17 Russia shot down two SU-25 near Snizhne with a BUK located in Russia approximately on that exact forward position:

Or read this article.
And in this video the Russian terrorists search for the pilots:


RU reportage how they downed today #Ukraine SU-25 "to teach you not to fly", they will proceed with chasing UA pilot https://t.co/wZyRN4PsZ6
— Ukraine Reporter (@StateOfUkraine) July 23, 2014

So it is clear the BUK sytem is on Russian soil in that area.


Then we have to ask: why would they put a BUK within operational range of a radar unit on Russian soil, while there is little to no strategic advantage to having a BUK next to the radar on Russian soil?

The logical answer is: to OBSCURE the fact that it's RUSSIA being at war with Ukraine and to PRETEND that it is ‘the rebels’ or ‘the separatists’. They have been sending messages out of capturing a Ukrainian BUK for days and weeks, just so they could bring one BUK in from Russia without alarming the world too much. They have been doing this with EVERYTHING they brought in: ALL has been ‘captured’, so they say. It’s a disguise.

So this BUK would be a ‘captured separatists BUK’, but it could be put in range with the C&C and connect with it for effective operation.


Did the C&C know it was a civilian plane?
Answer: yes they did. They have been located there for weeks already, monitoring the skies. Civilian airplanes had been crossing over daily. It was safe, because they fly at an altitude where military planes do not operate.
Also they can check the IFF of airplanes and as such identify a plane.


If so: did they deliberately shoot down a civilian airplane?
Answer: yes, they must have known.

Here is the map again, now with path and direction of MH17 and its crash site: 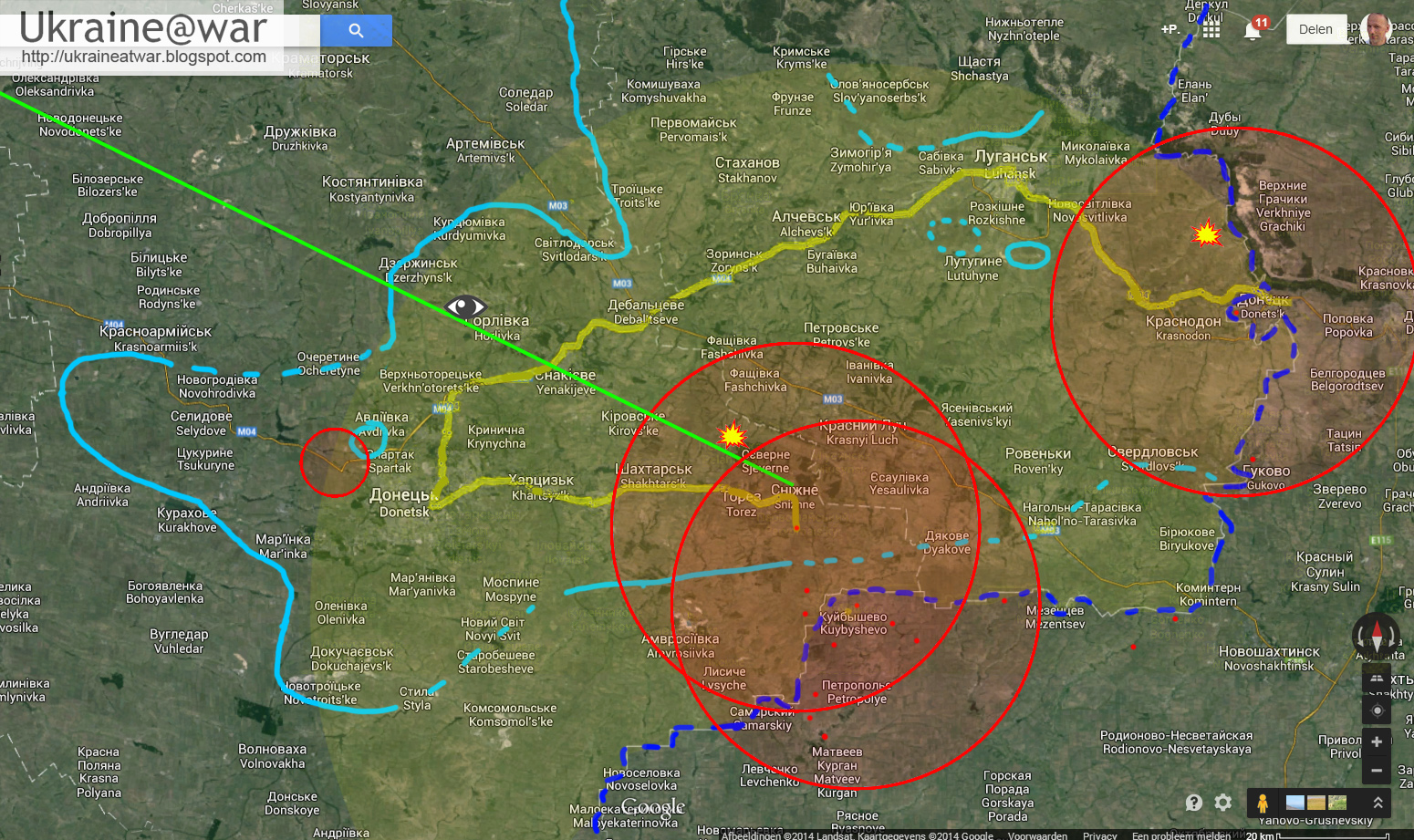 The eye-icon might be the location of the spotter on a high building in Horlivka who called that he had seen a plane. It is a common practice to put such spotters at the end of the radar range, to get early warnings/confirmations.


But why would the Russians want to bring down a civilian plane?

Why do these people kill and torture people? Why do they execute people who fight for them when they get caught looting? Why do they intentionally target residential areas with the goal to cause civilian casualties?

For two reasons: to be able to get awful dramatic footage for Russian TV and next to be able to blame Ukraine for it.
Sometimes they fail to hide that THEY are actually doing it. In that case, the message is: get out of our way, move aside, don’t bother us, or we will kill you. They don’t want civilians to harass them or tell the Ukrainiana army their positions and things like that. So they threaten and they kill to make people obedient and not bother them.


But how does that explain them shooting down an airliner?
They want a clear sky. They want to be able to shoot down everything that flies in the sky. AND they want to do this from Russian territory, so their units cannot be counterattacked. Of course they cannot shoot down an airliner from Russian territory. So they drove one into Ukraine, shot it down, drove it back. The INTENTION was to blame Ukraine for it as they do with everything. And even when that would fail, it would be very hard or impossible to prove the connection with the C&C across the border.


Was it a mistake that they shot MH17 down?
Did it change anything for them? Did they show respect for the innocent dead? Did they want to have a ceasefire for three days so the dead could be removed safely? Or for the responsible ‘rebels’ to be brought to justice?
No, they did everything to obscure, to remove evidence, to slow down, to remove photos and videos from cellphones from victims, etcetera, in order to make it as difficult as possible to find out the truth.
They don't care about these (civilian) deaths. It is as simple as that.

They got away with ALL the other incidents they caused. It looks like they get away with this one too...


Now they have the clear sky they want. NOW they can shoot down everything that flies by without thinking and from safe RUSSIAN territory.

Summary and conclusion
The TELAR/BUK that shot down MH17 was deliberately driven into Ukraine to a location within range of a Command and Control Radar unit on Russian territory.
There was hardly any strategical gain compared to having a BUK on Russian territory.
The goal to have such a complicated and dangerous operation of bringing the BUK into Ukraine was to OBSCURE the fact that it would be operated by Russians.
The BUK came WITH a crew.
The C&C in Russia had been monitoring the skies for weeks already, if not for months. They have seen civilian planes all the time.
They got an early warning by a spotter.
They knew MH17 was a civilian plane.
Still they gave the order to bring it down.

It does not mean EVERYBODY knew this. In fact NOBODY local knew about it. The locals ALL thought and where told it was a AN-26, until they found out. Only the few people in the C&C and maybe the crew in the TELAR itself knew about it. These people operate in strict discipline and doctrine. They had orders and ask no questions.

In Russian language other people have come to the same conclusion too: