On January 30th Donetsk Kuibyshivs'kyi district got randomly hit by artillery shells. A dozen civilians died. A dozen videos appeared on the incident with gruesome details. Graham Phillips and Patrick Lancaster were quickly at the scene to make their warporn videos. They were also filming a woman crying dramatically without tears and vowing to go to battle to revenge her killed husband: 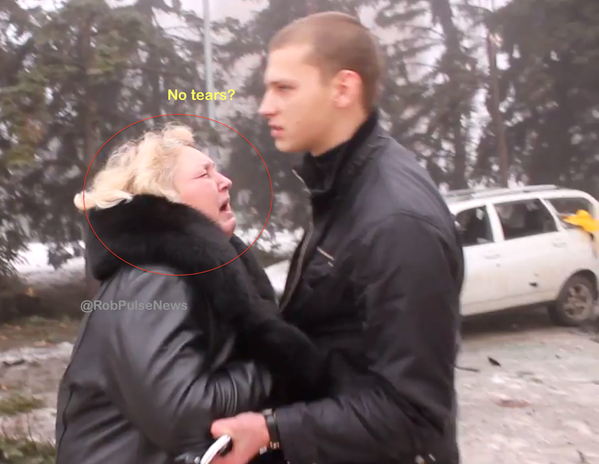 A CNN reporter was WITH Graham and Patrick and made an item there:


With the help of the community I intensively looked at ALL information that could be found. Here is the result.

These are all the impacts and bodies I have been able to find on the videos: 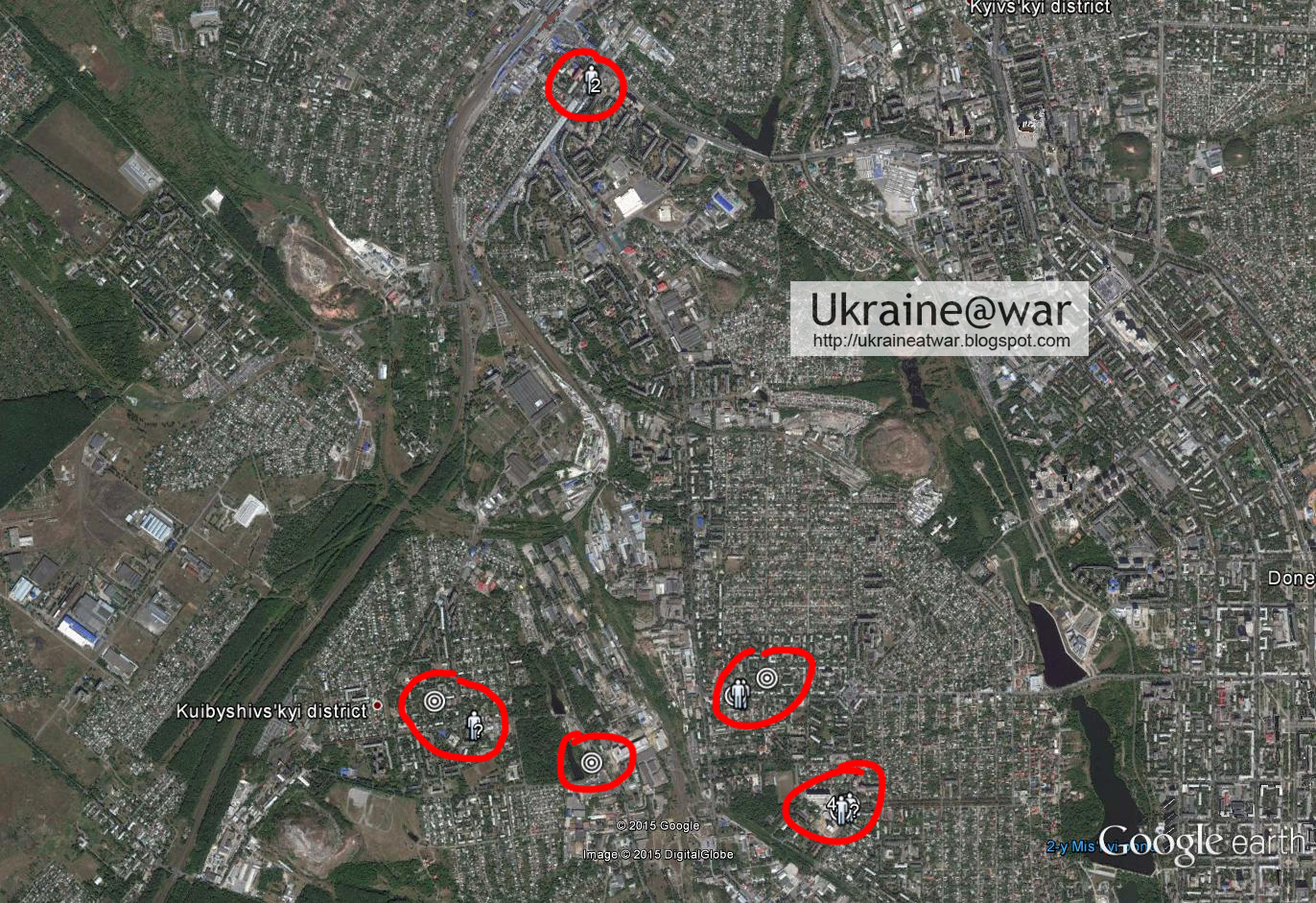 At least 8 shells, 9 dead people and possibly 2 more or at least wounded.

What's typical, is that one impact at the market near the train station (most Northern one) is TOTALLY out of line with the others. BUT... I do see a pattern: 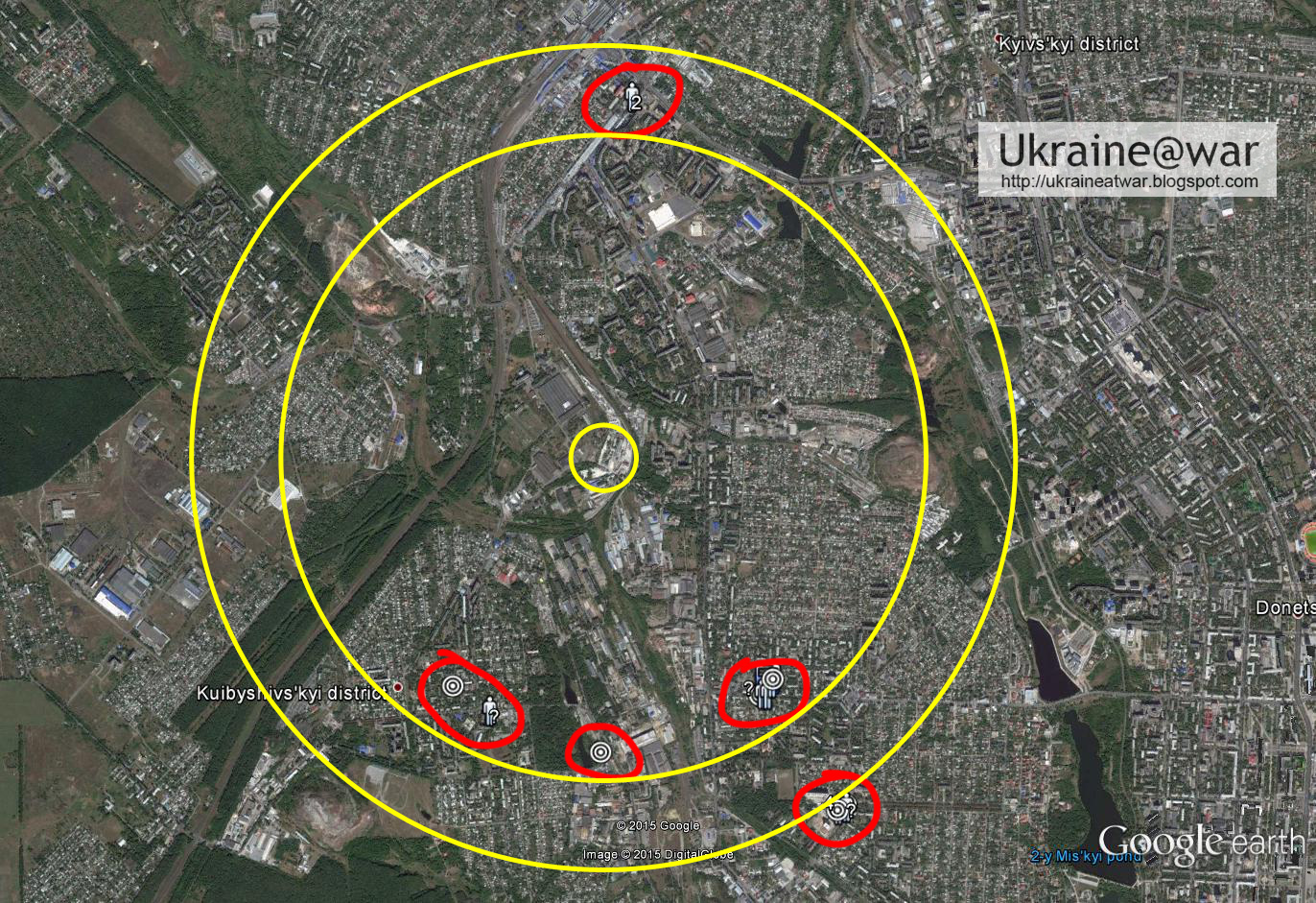 Since we learned from the mortar attack in Leninsky District that there are some Russian terrorists driving around with a mobile mortar in the back of a truck, I wonder if they might have done something like that here too? Firing from one position (small yellow circle) and firing into different directions, only changing the angle one or two times... 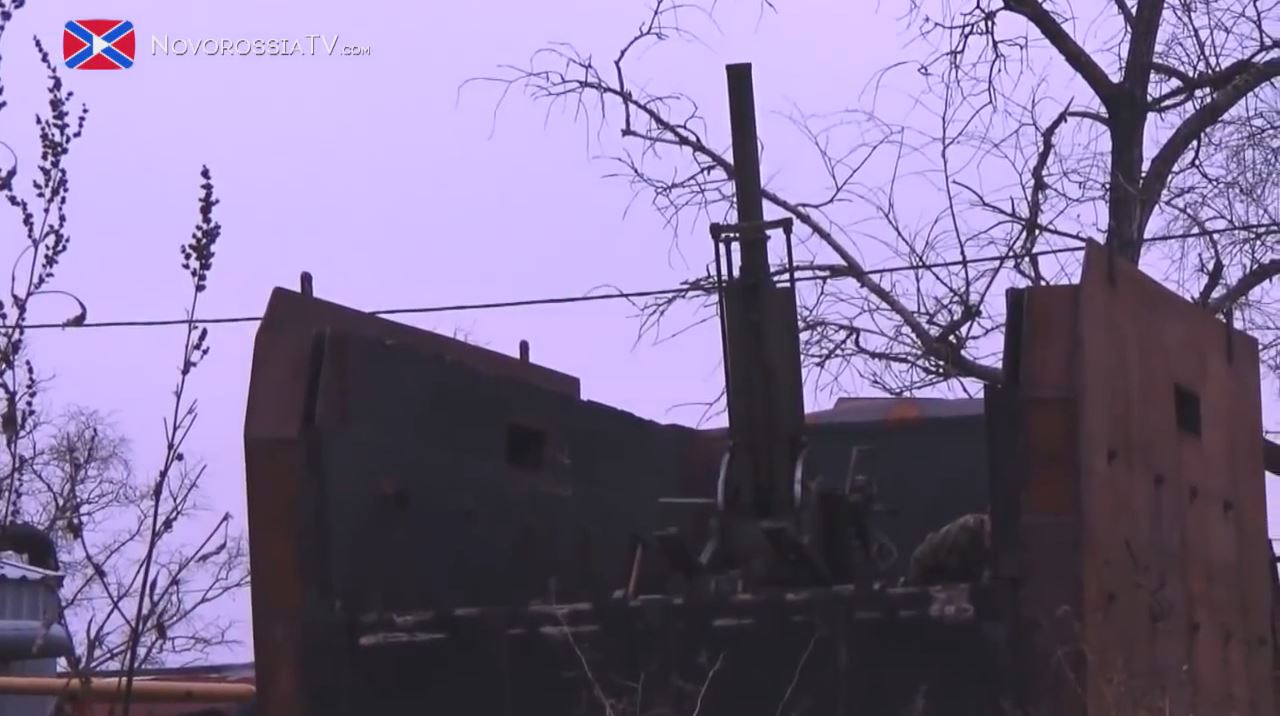 But... only 3 impacts have clearly been filmed. And NONE of the Russian Propaganda channels/videos show impacts. The impact videos available are from civilians. It's even so that the Russian videos DELIBERATELY avoid filming impact craters.
The reason might be obvious: it would mean we can determine the direction and proof that THEY did it. So I am pretty sure all the Russian 'journos' had instructions NOT to film craters and impact sites anymore.

The most clearly recorded crater is this one: 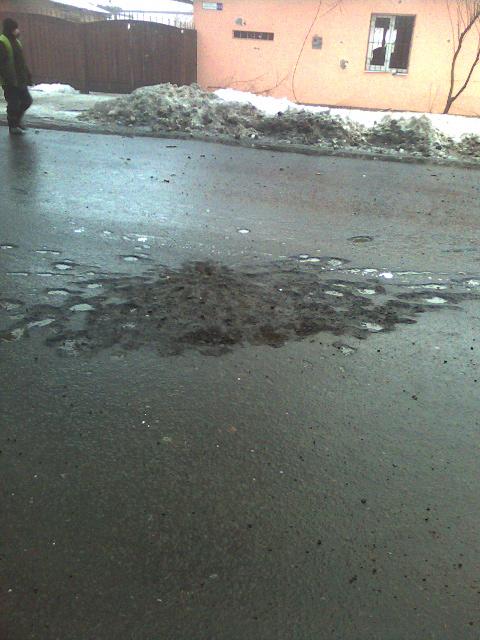 Here is a video of it:

Take note that the OSCE workers are looking at THAT crater! They determined this crater to come from NW. See their report.

This is yandex streetview on that location: 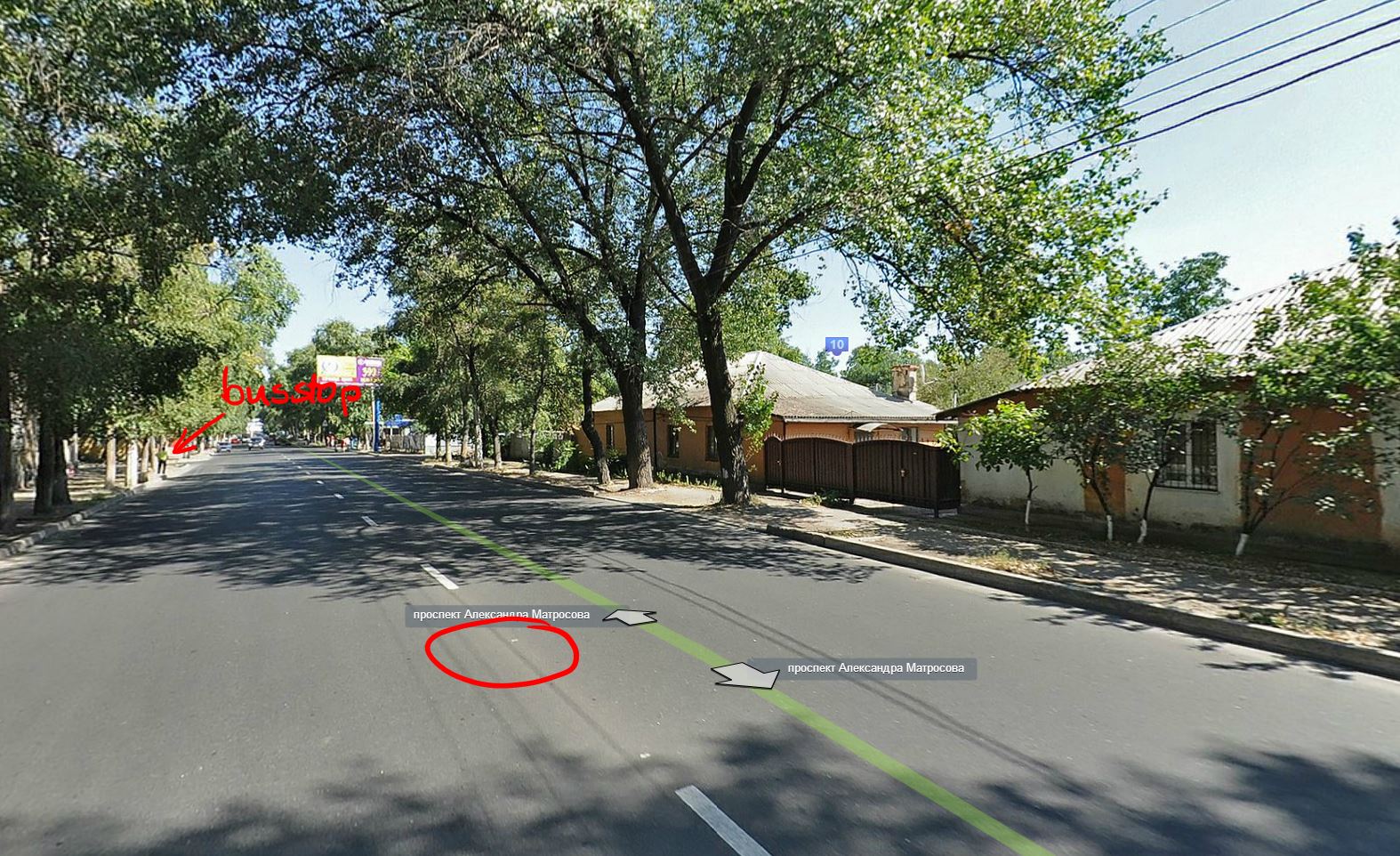 The bus stop (seen in several videos) can be seen in the distance and the approximate position of the crater is indicated. 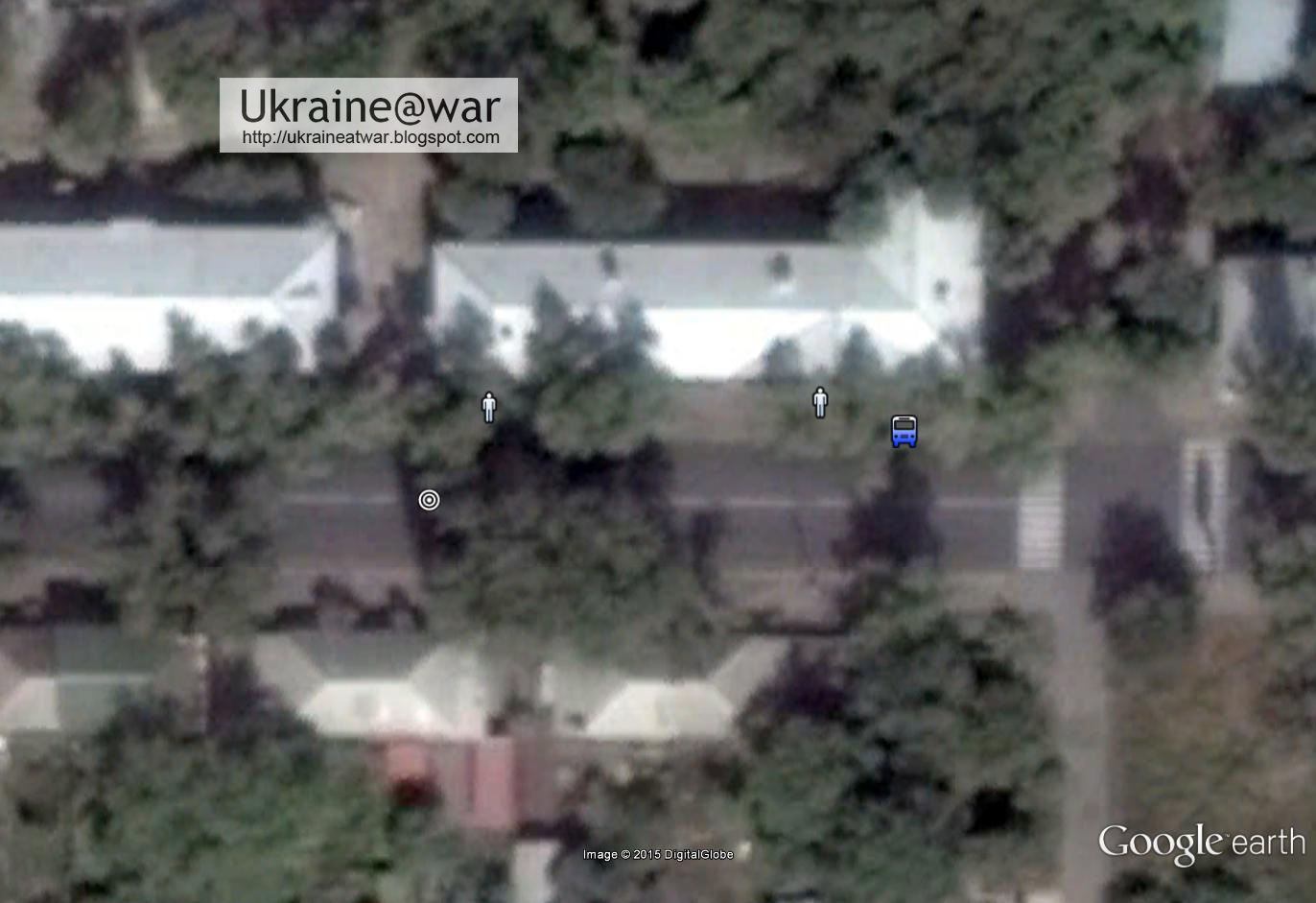 Fortunately we have a rather good photo of the crater and we can use that to determine the direction of impact: 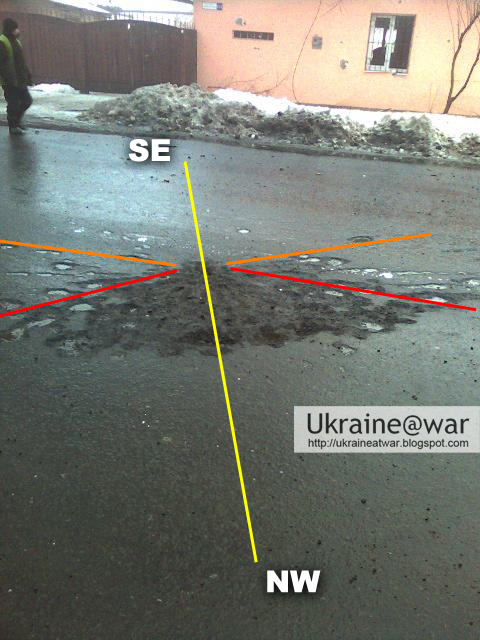 Between the red lines the asphalt is the most damaged. Between red and orange lines less and between orange lines almost zero. A line (yellow) is drawn through the heart of this and it goes approximately from NW to SE.

Here is another one from a video: 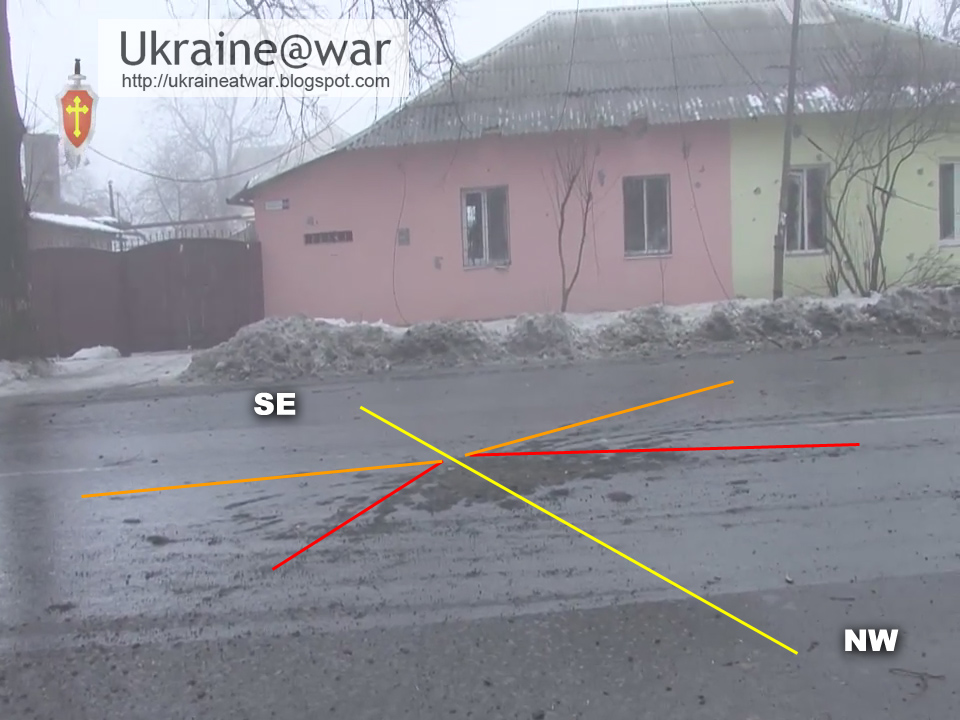 Now how does this tell us from which direction it came? You can find a good guide and explanation here.

Basically there are two options: 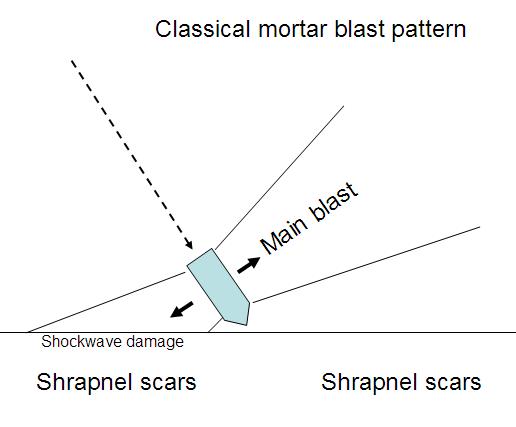 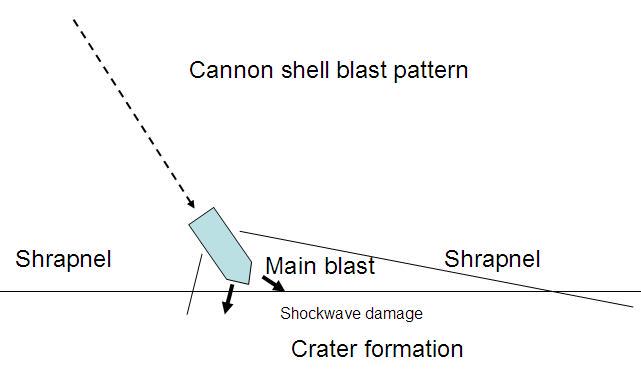 So it is a little tricky to definitely decide what it is.

This is an example of such a mortar shell with the tail sticking in the asphalt: 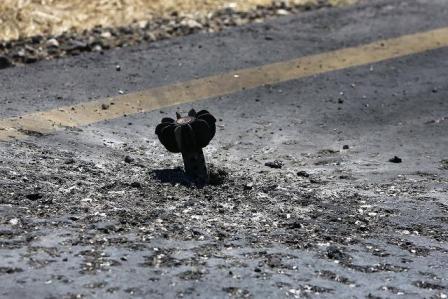 One street away from this location there is another impact: 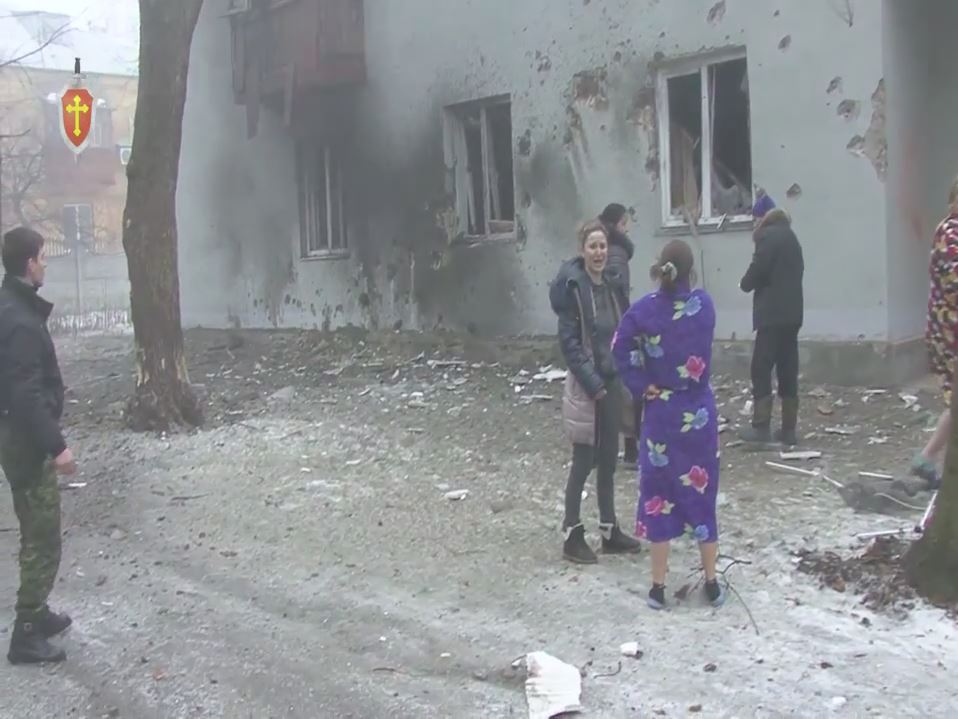 We can see a big line of holes on the wall at an angle and the impact location is left and just behind the tree.

This composition shows all: 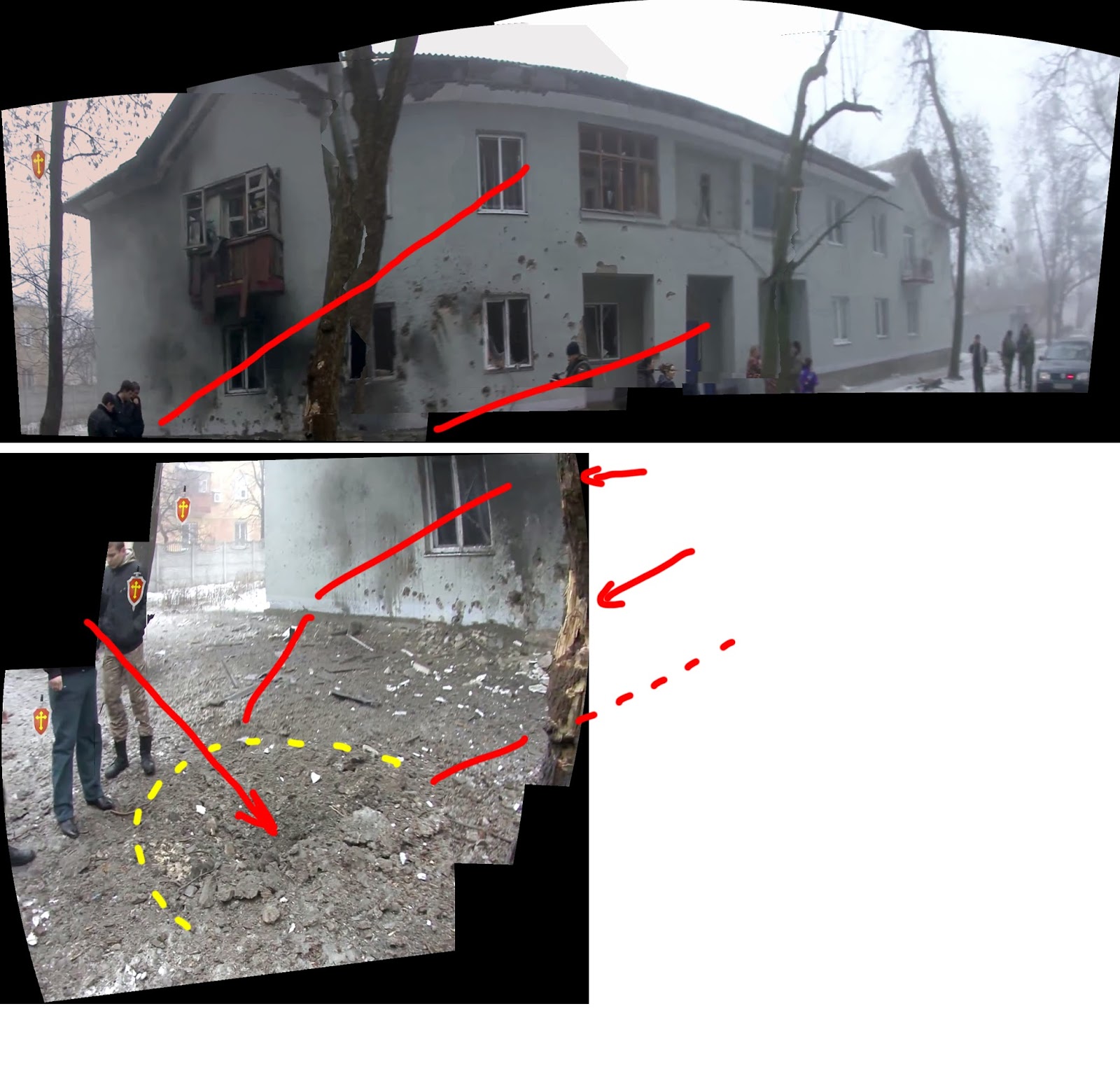 This boy is showing a fragment of a mortar shell: 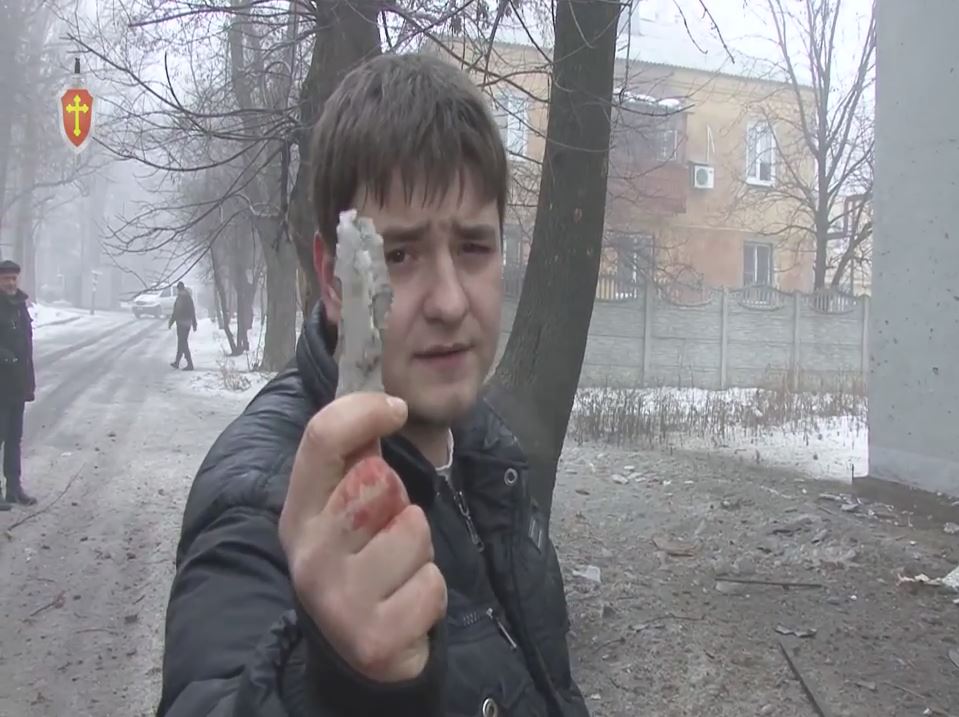 Contrary to Graham's weeping lady, this boy is genuinely angry (at Poroshenko, because the Russians succeeded in making him believe that the Ukrainian army is shelling his city).
Note that he has blood on his hand. 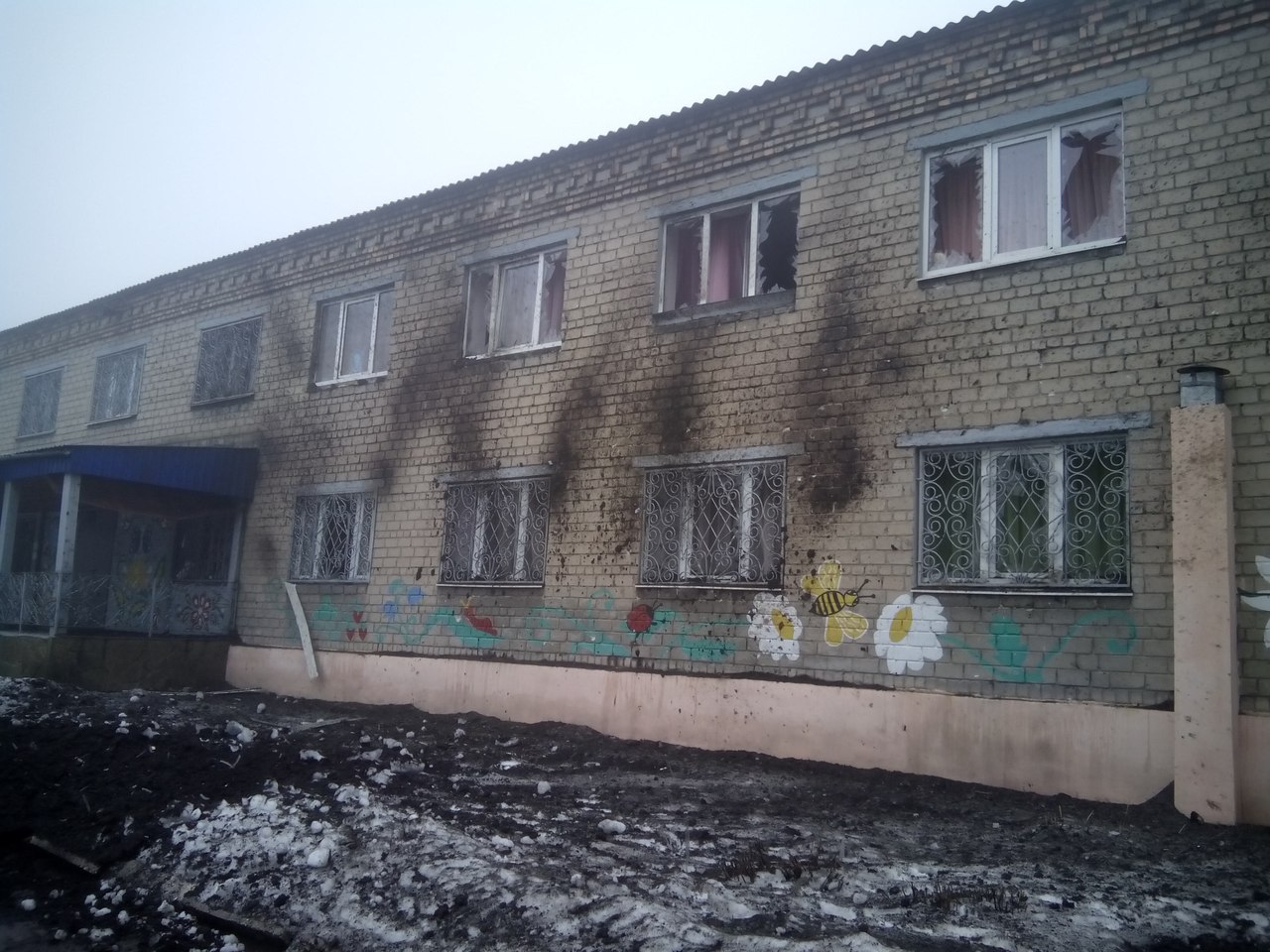 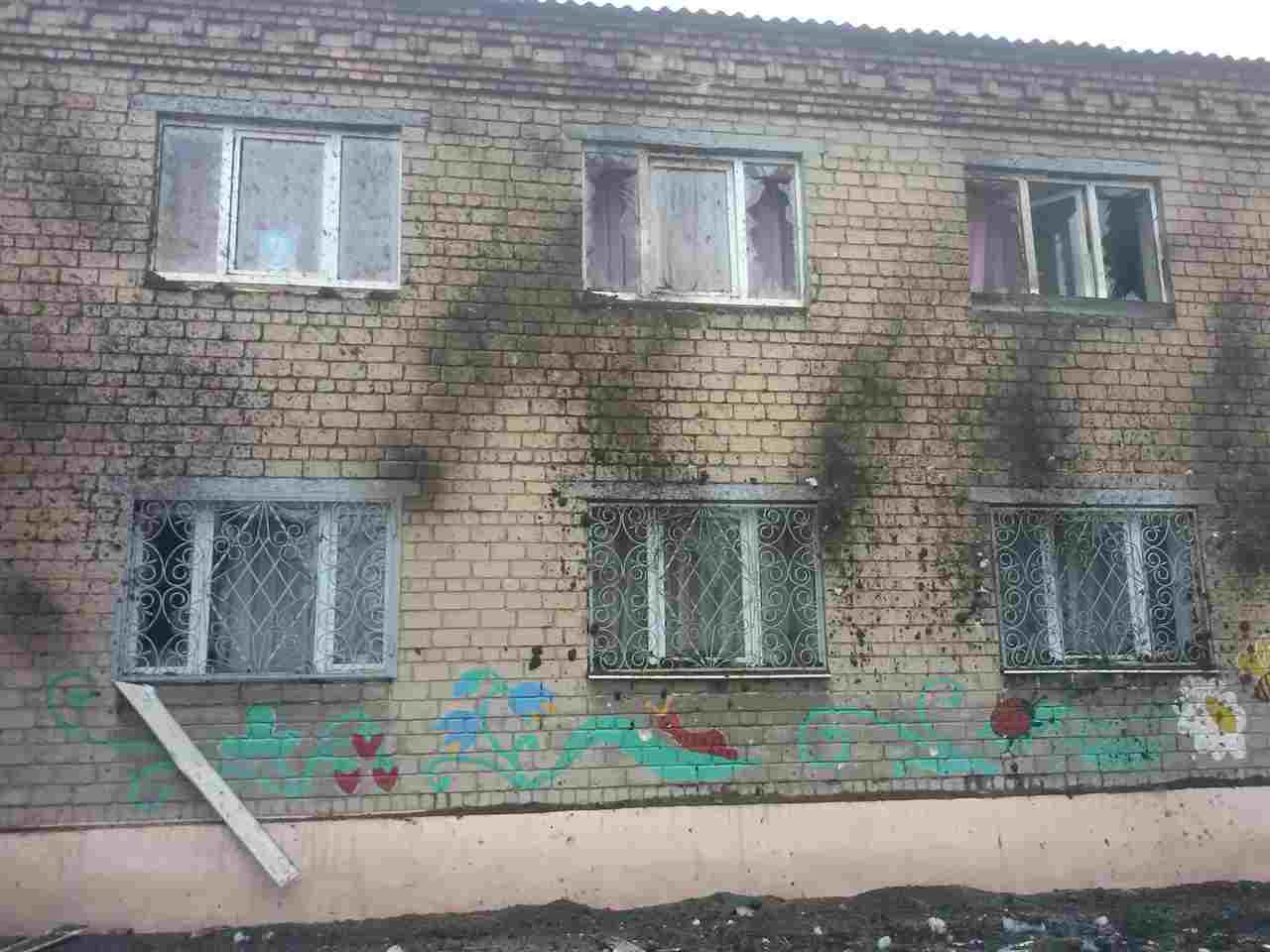 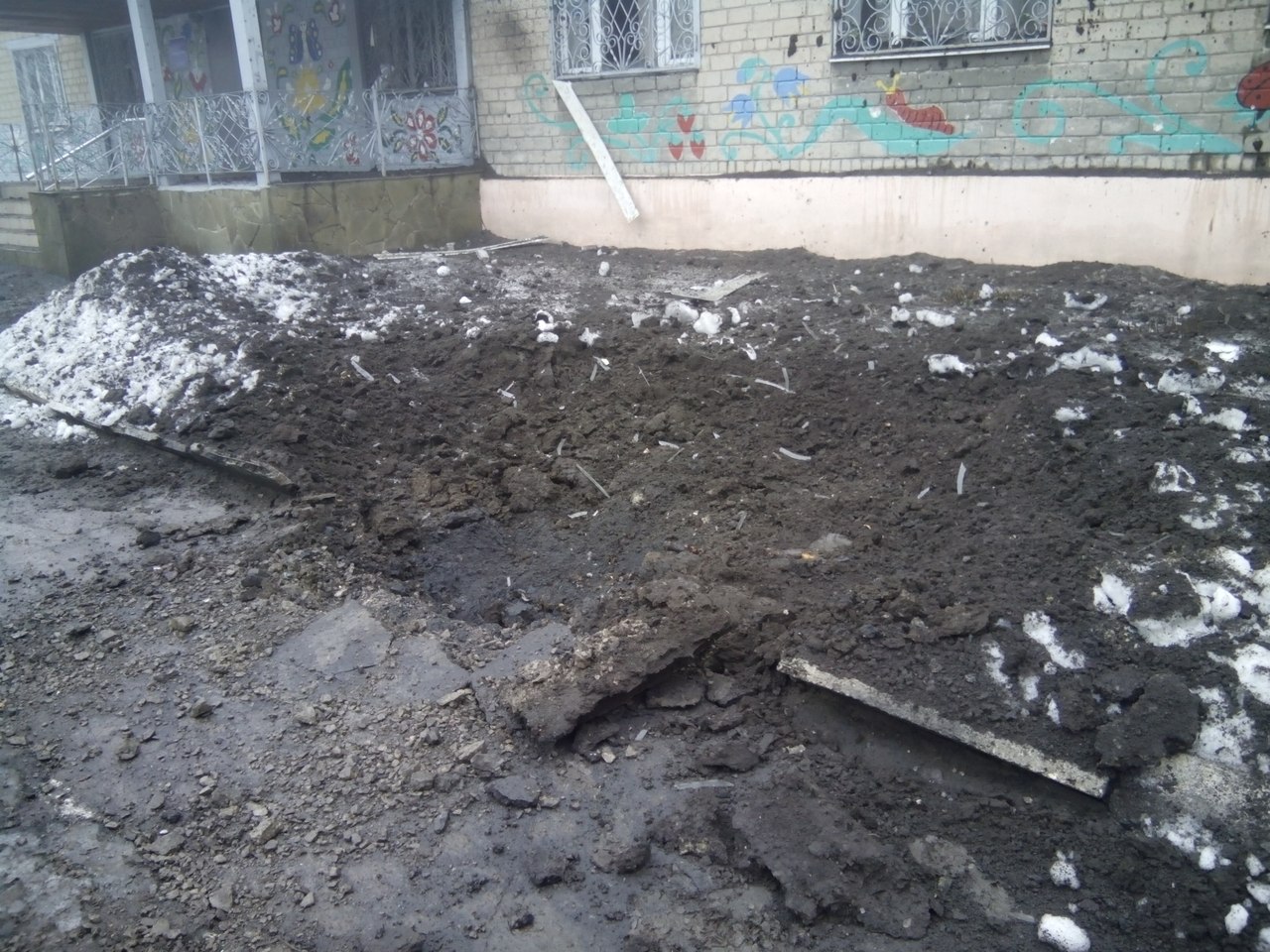 Note that there is a lot of mud on the wall, but hardly any holes from shrapnel. It means the shell did not fly TOWARDS the wall, otherwise it would have been littered with holes. The shell must have flown OVER the building. The shrapnel blasting backwards hit the ground first, blowing up all the mud against the wall.
Some windows are not even broken.
So this looks like a high angle mortar too.

To determine the direction is tricky. But the mud might help a bit: 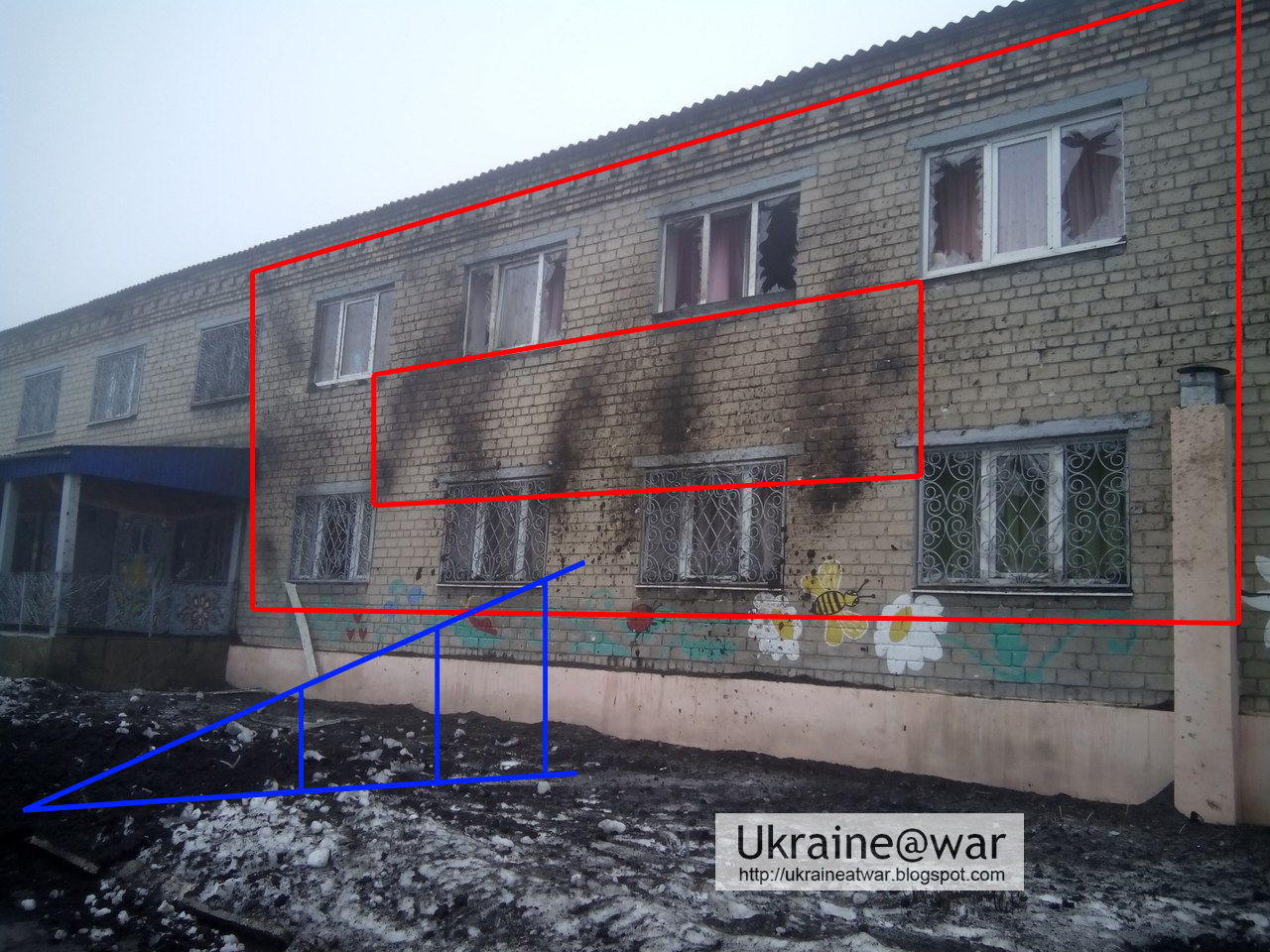 The centre seems to be more on the right side of the wall.

The blast area could maybe be interpreted like this: 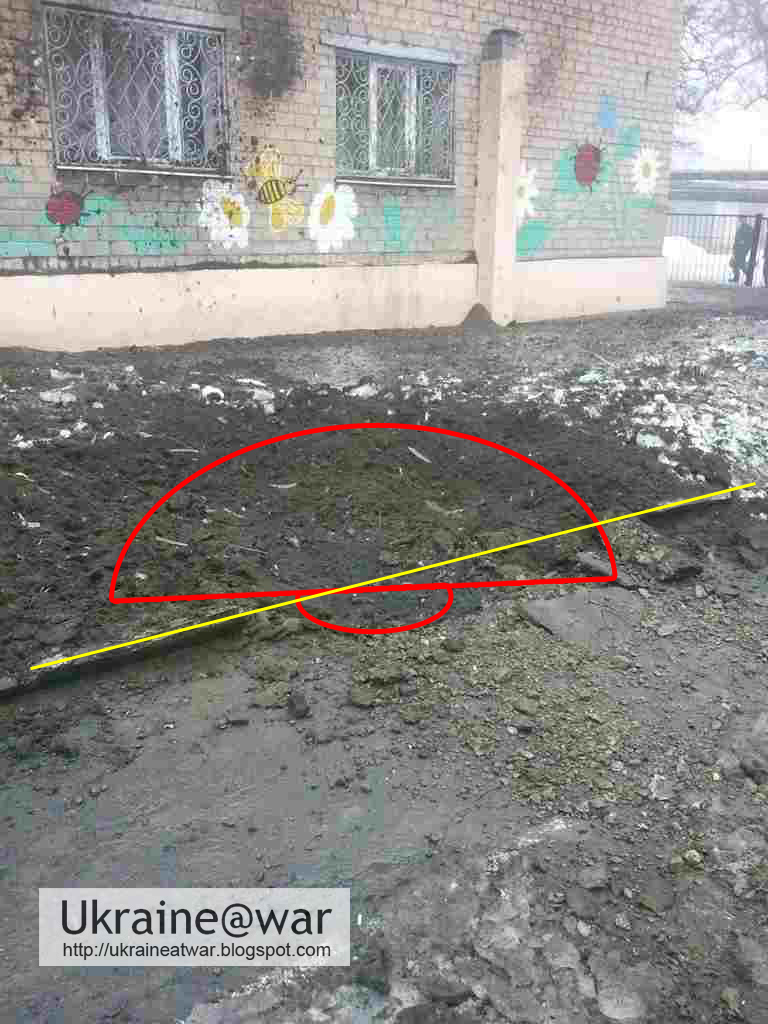 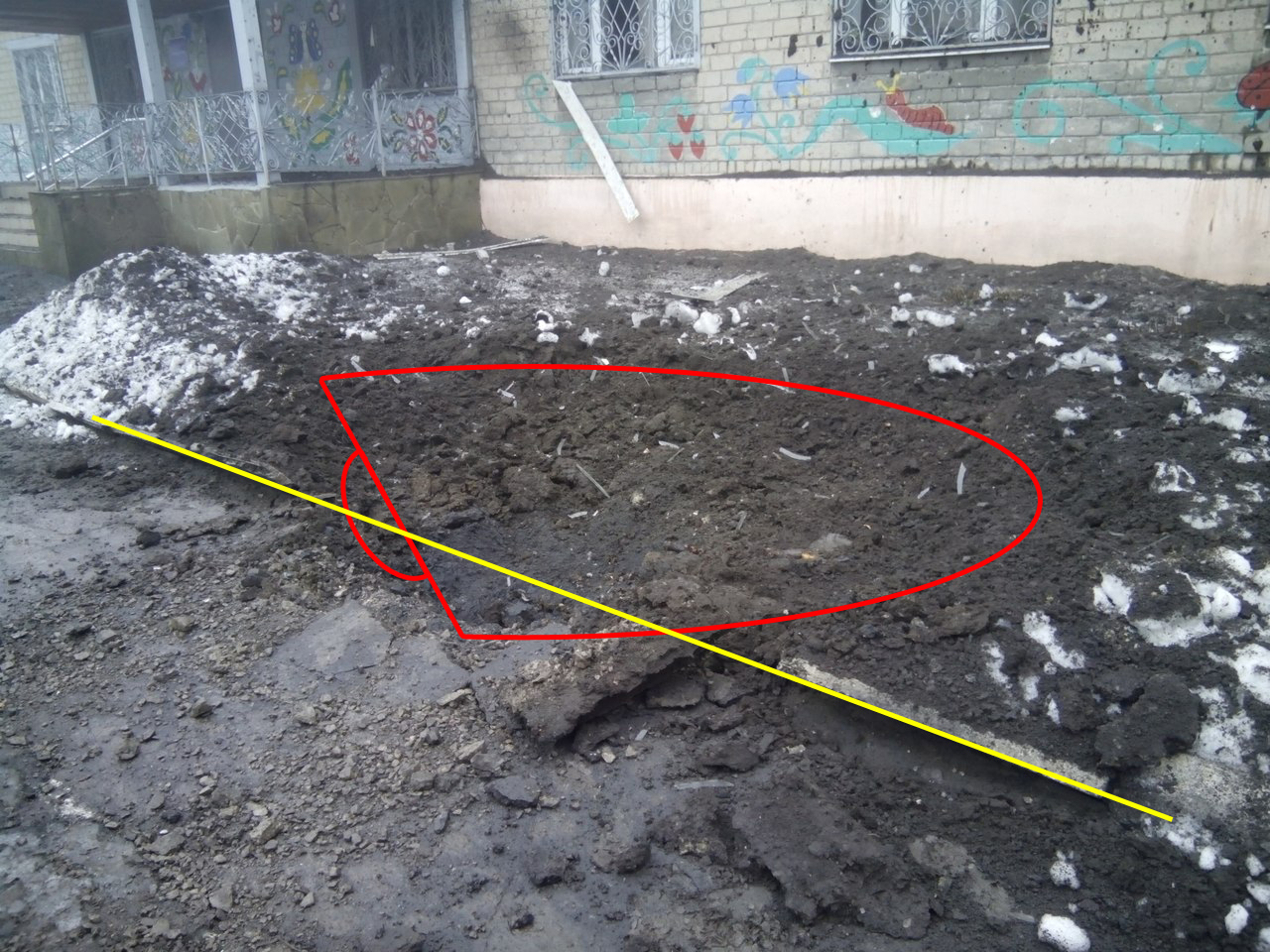 When we take a large margin of error, directions may look like this (coming from anywhere between the red lines): 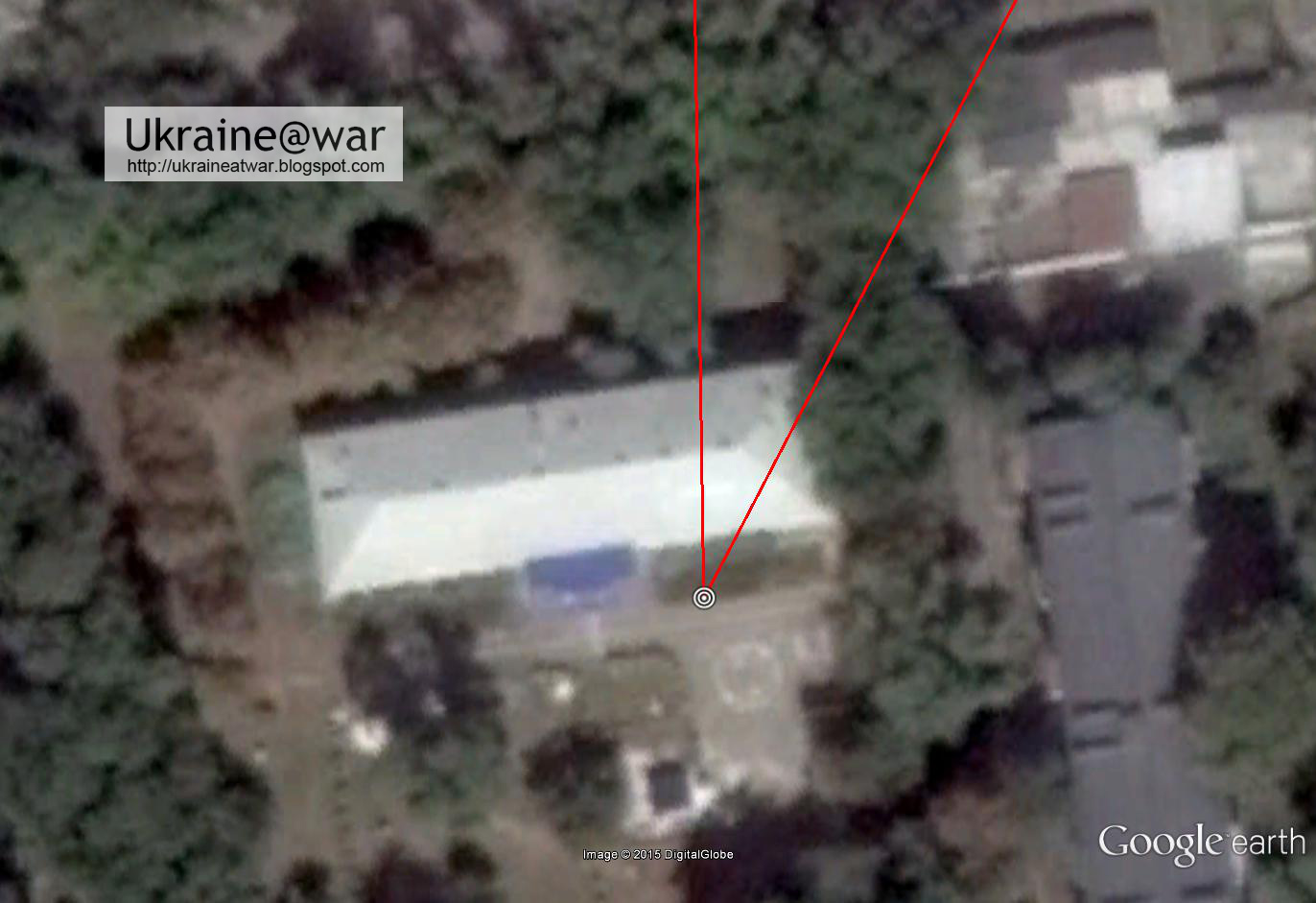 Putting everything together on the map looks like this: 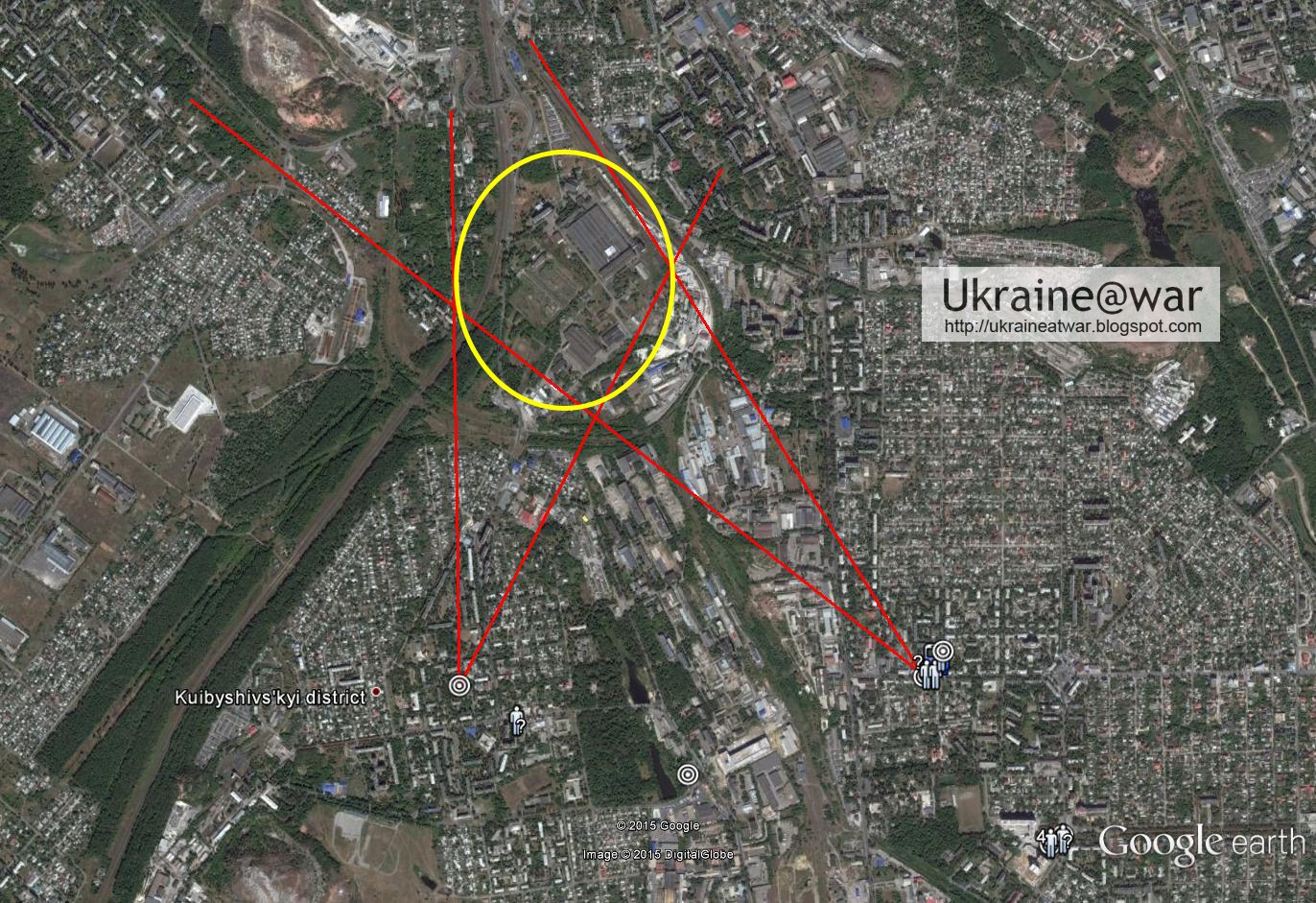 That big area with complexes MIGHT have been the area where they fired from. 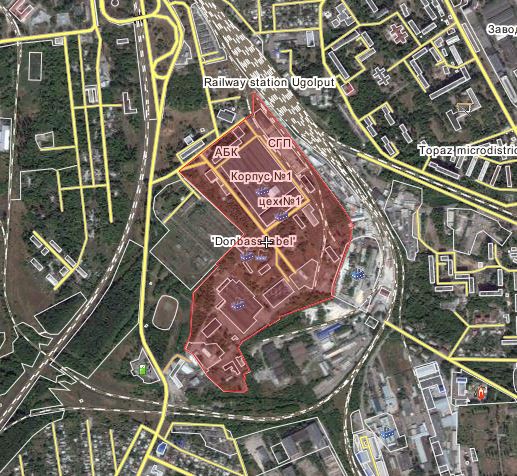 And now THAT's interesting. It is owned by Andrey Kluev, who since March 7th 2014 is wanted for involvement in mass murder and the EU froze his assets [source].

This article and this one show that Donbas Kabel Factory HAS BEEN USED PREVIOUSLY as a firing location!
That makes it VERY LIKELY that it happened again.


This video is not very interesting to watch, but it recorded the sound of the shelling that day. Every now and then a shell hits with quite some time intervals. This excludes a Vaselik mortar, since that rapidly fires 4 rounds.


Conclusion
We know from many instances by now that the Russian mass murderers are deliberately looking to get civilian casualties. We have been able to proof this by determining direction based on impacts. Now they try to hide the craters from being filmed.
But luckily civilians are still filming this. It means it makes it more difficult, but not impossible.

The distance from the furthest impact area is 10 kms from the frontline. This is out of range for a mortar. It means Russian mass murderers have been firing this from occupied territory.

Now the big question is: what has CNN been doing there with Graham and Patrick?

Many thanks to @xuilolala, @_hedder, @Gorsefires and @RobPulseNews for all the time they spent sorting all things out.