For a long time I have given @marcelvandenber the benefit of the doubt, because heh... it IS possible that somebody who is not informed very well questions certain information. But when after half a year he stills fails to admit the obvious he is either extremely incompetent or indeed a straight out troll.


So let me summarize for you what 'trolls' are and do.
Dozens of such trolls are operating in EVERY European country in their respective native languages. And somehow they get paid for their services. Although it's possible that some are pro-Putin-killing-regime for other reasons, but that's hard to imagine.


He even DARES to suggest that a BUK with 3 missiles driving through occupied Lugansk might be STAGED pic.twitter.com/t12Kj1aDbD
— Ukraine@war (@DajeyPetros) February 7, 2015


Like SERIOUSLY??!! "Lets just drive one of our own BUKs through enemy territory and secretly film it so we can blame Russia :D :D."
How can you call yourself an MH17-expert and even think something like that could be possible?

Marcel even goes to great length defending this point of view.

But let's keep it simple:


Simple: there was NO RISK above 10 kms, UNTIL aggressor Russia brought in the BUK. You can't blame Ukraine for that. pic.twitter.com/h8tBeUaoVF
— Ukraine@war (@DajeyPetros) February 7, 2015

Even Wikipedia is better informed than Marcel:

Let's spell it out: 37 airlines continued overflying Eastern Ukraine and 900 flights crossed the Donetsk region in the seven days before MH17 was shot down.

The point is that NOBODY would have thought that Russia was going to do something TOTALLY ABSURD like that. Up until the 17th of July, the airspace above 10 kms was ABSOLUTELY SAFE.

The Dutch, Ukraine, Malaysia have ALL been intensively raped by such an aggressive act. It is RIDICULOUS to even think about blaming the victims. 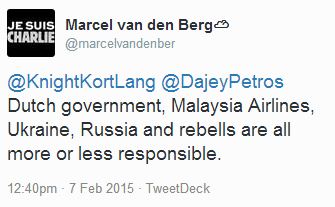 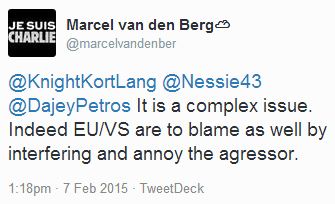 After confronting Marcel he accuses me of being biased:


Inveterate MH17 critic @marcelvandenber accuses me of being biased. Please explain to me in detail? How am I biased? pic.twitter.com/zbUMLqiqPo
— Ukraine@war (@DajeyPetros) February 7, 2015

But he comes up with NOTHING AT ALL. It is an empty accusation. All he has to says about this is: 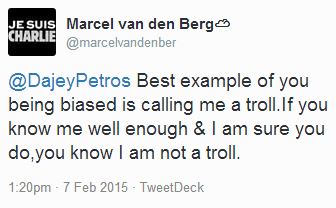 I indeed know you well enough and that's why I am challenging you, to explain yourself and show your true colors. Where is your alligence? But you evade the matter.

In an earlier confrontation Marcel was more specific:

So I am biased because I am pro-Ukraine? Well THAT is about the worst thing possible on earth, isn't it?

I'll be very specific here: I am NOT pro-Ukraine. Ukraine is a corrupt country dominated by oligarchs who plunder their people and country from it's riches.
BUT... to a VERY LARGE extend this is Russian heritage!
AND... there are MANY GOOD people in Ukraine who imagine a DIFFERENT country and future for themselves and their children. They want to CHANGE things.
Right now Ukraine is a country struggling to escape the corrupt stranglehold that is suffocating it.

And abusive husband Russia does not want to let her go without a fight... breaks in into the kitchen and smashes all pottery in front of the kids and tells them that "mamma is a whore" and they should come-to-daddy... and some DO listen to that, and they can't even be blamed for it.

THIS aggression is what I find disgusting and what I am against.

I am not even necessarily pro-Ukraine. I am pro-Ukrainian-people who stand up for their kind, for their country, for their freedom, for their future without slavery. If Ukrainians are corrupt, kill, lie or do whatever other evil is possible on this earth... I will be AGAINST THAT too!

So yes, I do support Ukraine in their struggle for freedom from the Kremlin mafia and corruption. As such I may even be stronger anti-Putin and anti-Kremlin than pro-Ukraine. And if it is bad being pro-Ukraine like that, then so be it!
Am I biased because of THAT? Not the slightest. So Marcel you'll have to come up with something better than that. I am looking forward to your reply.

Have a look at this convo: 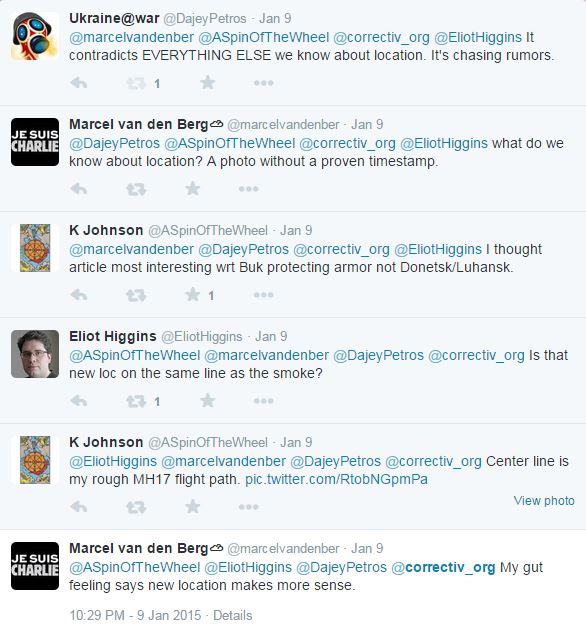 Correctiv comes with a beautiful MH17 multimedia presentation, but they have a completely NEW launch location based on a single eye-witness report of a man who says he will get into trouble if he says something...
So this goes AGAINST EVERYTHING we already know and anybodies gut feeling should say: "this man is just saying something because he does not want to get into trouble! He was a smart man to point to just some field anywhere."

That is called trolling. Always casting doubt. Never coming to consensus even about obvious matters.
Is Correctiv trolling too then? I hope not! They just didn't do their job well enough and/or they were not informed well enough.
But Marcel IS well informed. He knows all! And yet he says the photo is 'just a photo without proven timestamp' and goes for his 'gut feeling'. That is called willingly and deliberately... trolling. (OR... it is pure ignorance and incompetence of course... that's also possible. But I stick with the 'trolling' because I don't think Marcel is incompetent.)

Ok, I will finish with this one. Marcel's response after calling him a 'persistent MH17 doubter': 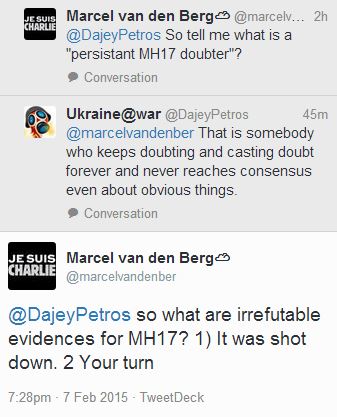 And this means we can start THE WHOLE discussion over and over again and getting NOWHERE at all...
Well... I pass on this one Marcel. 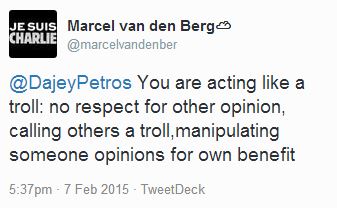 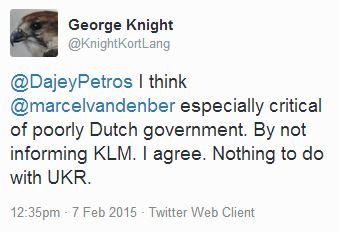 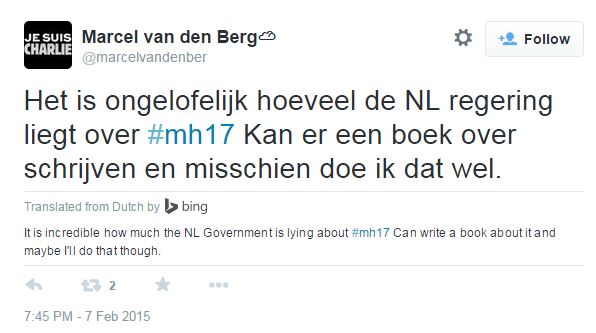 This is what he has to say about his OWN website he is maintaining: 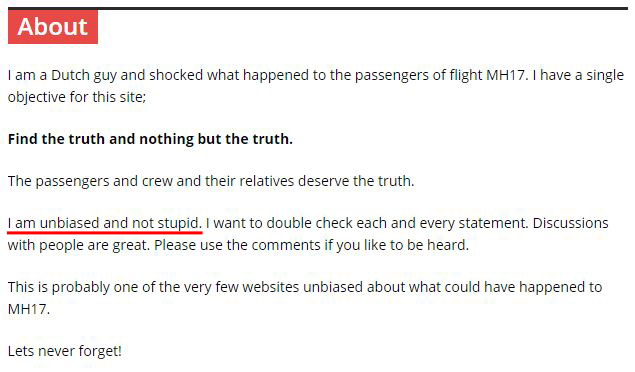 Just a comparison: I NEVER say I am unbiased. On the contrary! I make mistakes. I often write on my blogs: "If you see any errors or have additions, let me know". Sometimes people correct me. Sometimes I deleted tweets, because the information was false. So I ADMIT that I am not 100% unbiased and without error. But through the COLLECTIVE EFFORT OF MANY people who contribute to finding the truth, I will CORRECT when I am wrong. And that is a BIG difference!

Marcel on the contrary is a self-proclaimed 'unbiased' MH17-specialist who is operating on its own... and according to his own words he still doesn't have a clue!

Oh wait! Respect for this one:

I hope this will not get you into trouble.

Of course, if Marcel has anything sensible to say in response to this, I will publish that too here. And also when it is NOT sensible of course!
Meanwhile you can read the convos on twitter by searching on both our names.


Some interesting things Marcel says in response this blog: 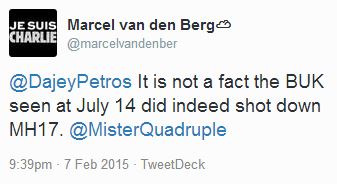 No, it was shot at an imaginary SU-25 who was using MH17 as a human shield, and because the missile got confused by all that it failed to explode, but the pilots got so scared of it anyways seeing it fly by, that they accidently pushed the self-destruct-button that overrides all other buttons in the cockpit so MH17 IMPLODED and all the impacts where created by a meteor storm that just happened to be in the neighborhood.
Oh, and the missile flew to the moon, that's why we didn't find it anywhere.


You can see Marcels entire response and discussion about this here.
You can find a personal comment to this blog from Marcel in the comment field below.

@marcelvandenber You've made your point clear: There are NO facts than MH17-was-brought-down. I respect your 'opinion'. End of discussion.
— Ukraine@war (@DajeyPetros) February 7, 2015

UPDATE 8-2
Marcel has been able to hunt down my identity and find my telephone number. He called me from a HIDDEN number, so I could not see HIS telephone number. He then threatened me to publish all my personal information and identity if I would not remove this blog.
I said: "You are blackmailing me? Please give me your number, so I can call you back. You know who I am, then let me know who you are too, so I can reach you."
He refused to do that, and said: "If you don't want this, then just listen to me".
For some strange reason the connection failed twice.
We talked some in DM in twitter and the last thing he said was: "remove the article and we forget what has happened".

The problem is I will NEVER allow to get blackmailed like this. I know my identity is already known to many, including FSB HQ. Then so be it... If I would give in to something this, it means they will have leverage over me and would ask me to remove whatever content they dislike next time.

So world, wait for the moment that Marcel van den Berg will publicly reveal who I am, where I live and whatever more he found out about me.

If he does I will answer all questions :D. (or not)


UPDATE 9-2
Indeed my address info has been published on twitter shortly after the previous update. But on a new empty twitter account entirely dedicated to publishing my details and discrediting me. I will NOT give the link to this, as you can understand. But all this activity is archived and reported.

It shows that Marcel very well knows what he is doing and is not an ignorant rookie.

I have an OPEN debate with him in which he is FREE to respond in any way he likes. He accuses me of being biased, but fails to specify how and where. I publish here for everyone to decide for themselves, INCLUDING his responses and comment and links to original discussion.

And 'Marcel' decides to go dirty...

This only raises more questions. Who is 'he' really? Why did he emerge as a self-proclaimed expert after the MH17 crash? Etcetera.
Posted by Ukraine@war at 11:47 AM