This video seems to have captured the assassination of Russian opposition leader Boris Nemtsov:

This Panoramio photo is taken from a similar point of view:

The red circle shows where the murder took place.

Frame by frame analysis shows that this is the route the 'cleaning car' took:

It has been waiting a while at this position behind a truck before it took the road on the bridge: 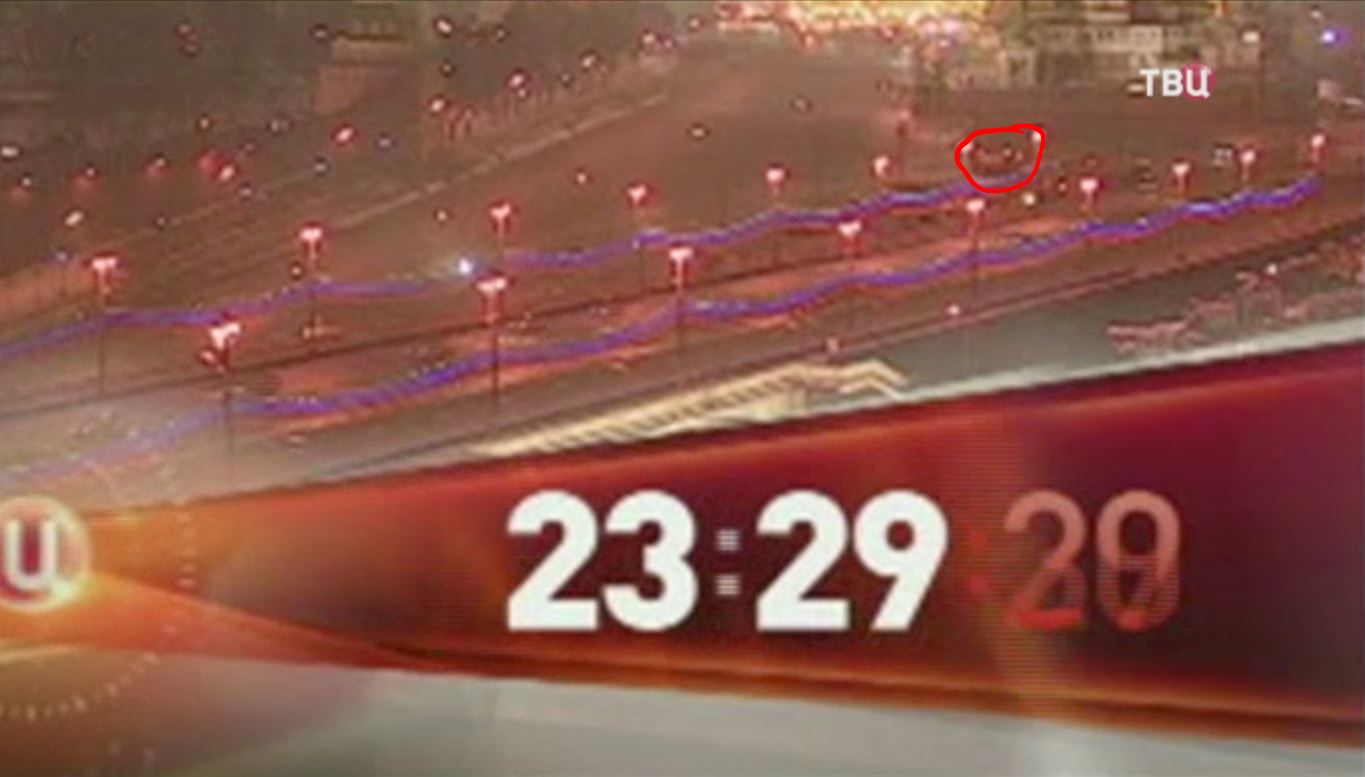 The flee-car came from the right side and not from the road straight towards the bridge:

There is a parking lot where it could have been waiting as to be able to arrive just in time after the kill: 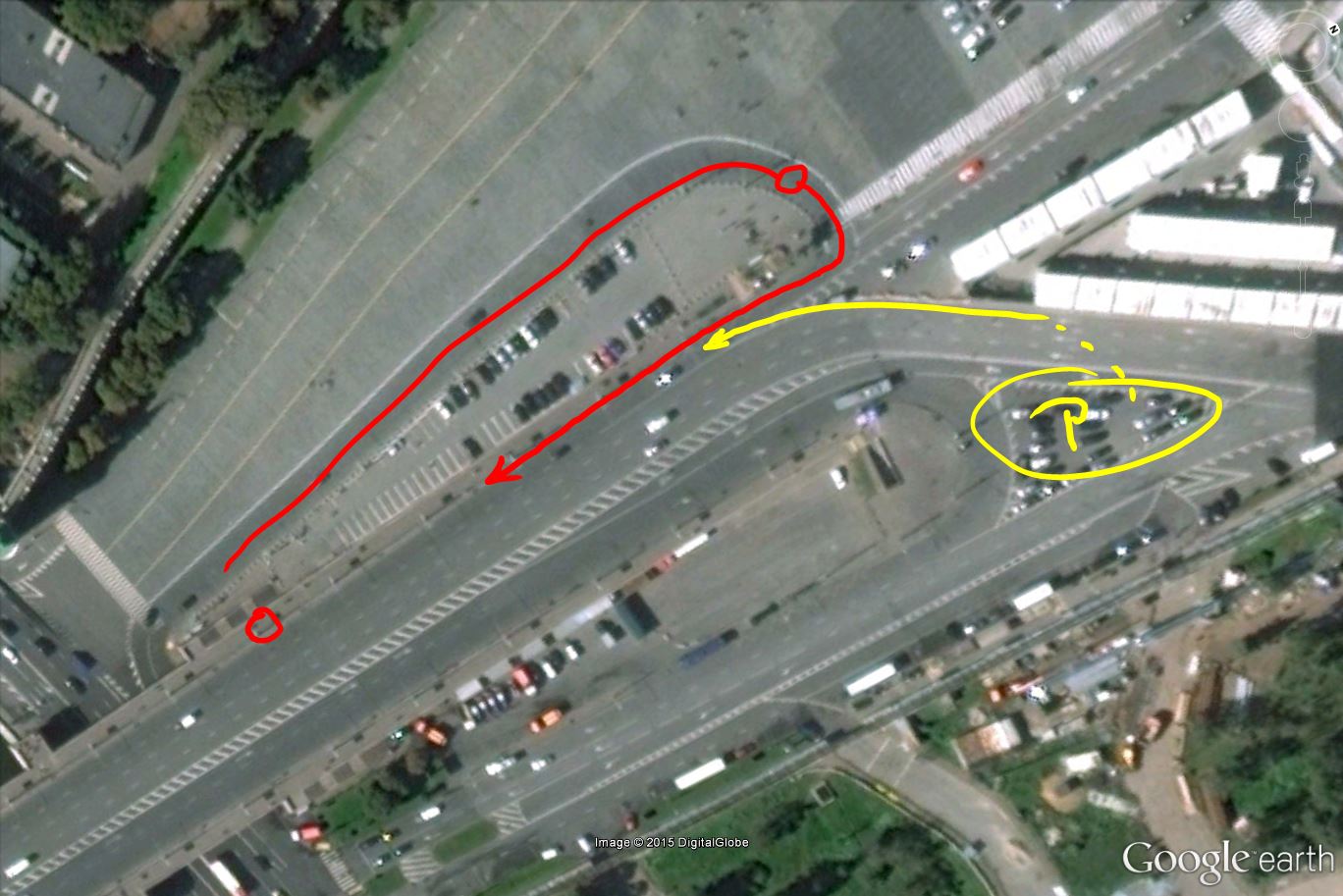 A person can be seen walking BEHIND Nemtsov and before the cleaning car is passing by: 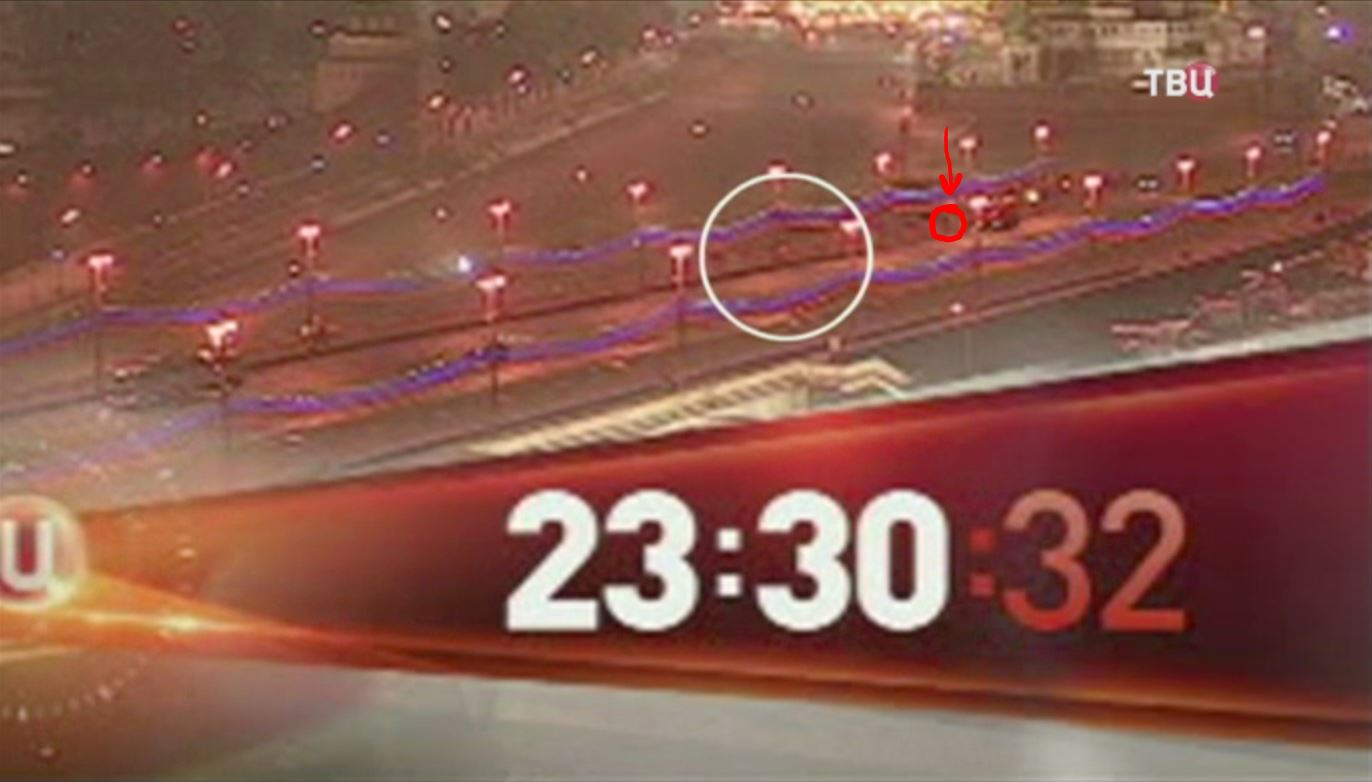 But he can not be seen anymore after the cleaning car has passed.

This super enlarge video shows it: 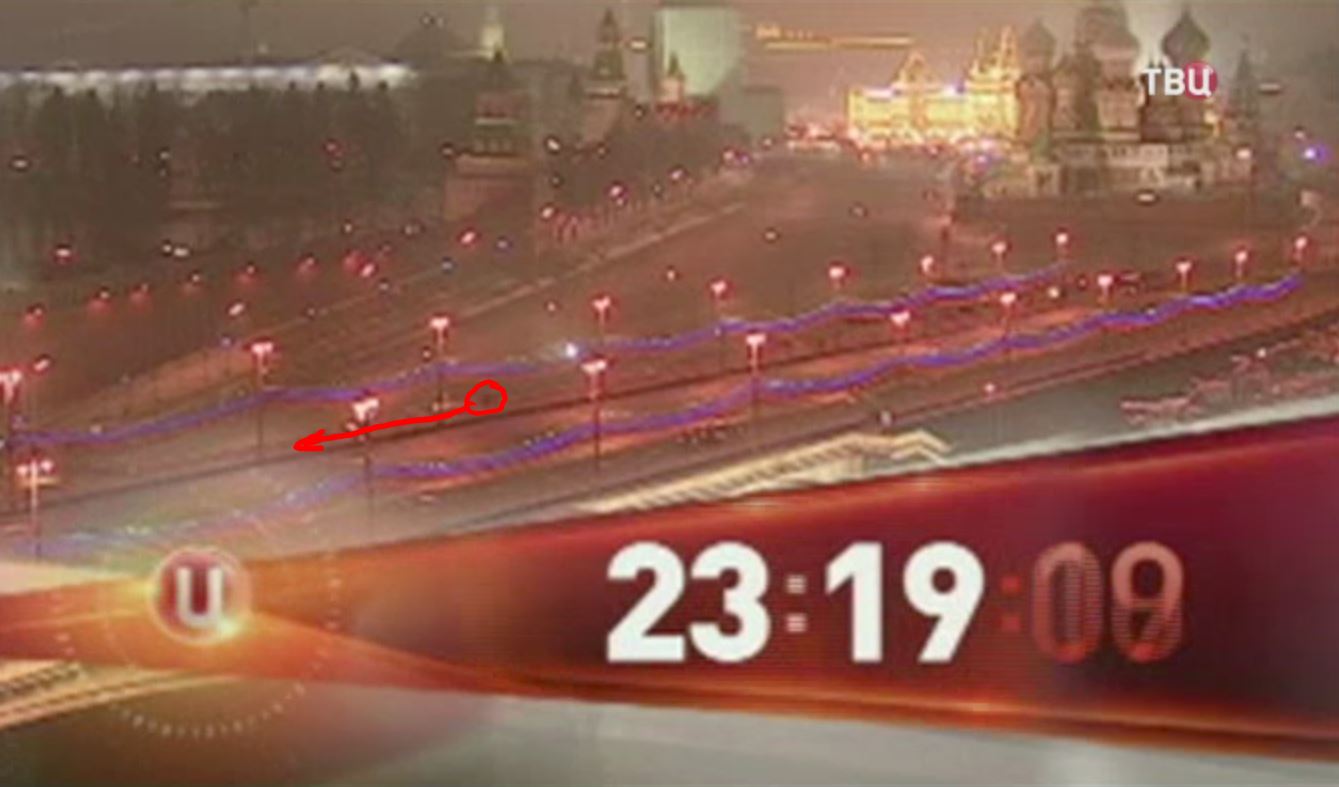 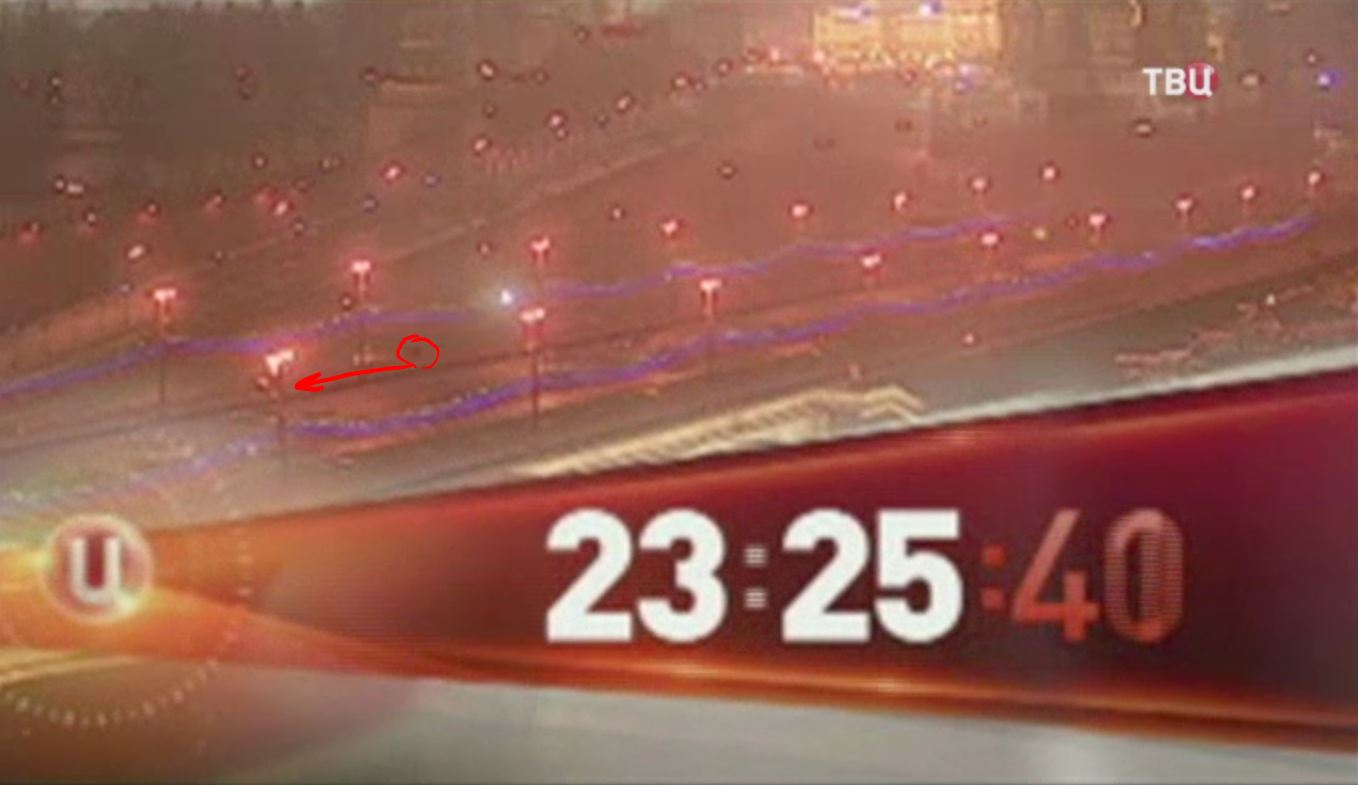 This extremely zoomed in video also shows nobody came from the stairs:

Retracing the path of Nemtsov to the moment where he appears, he seems to come AFTER the first lantern (red arrow) where there is a metro exit: 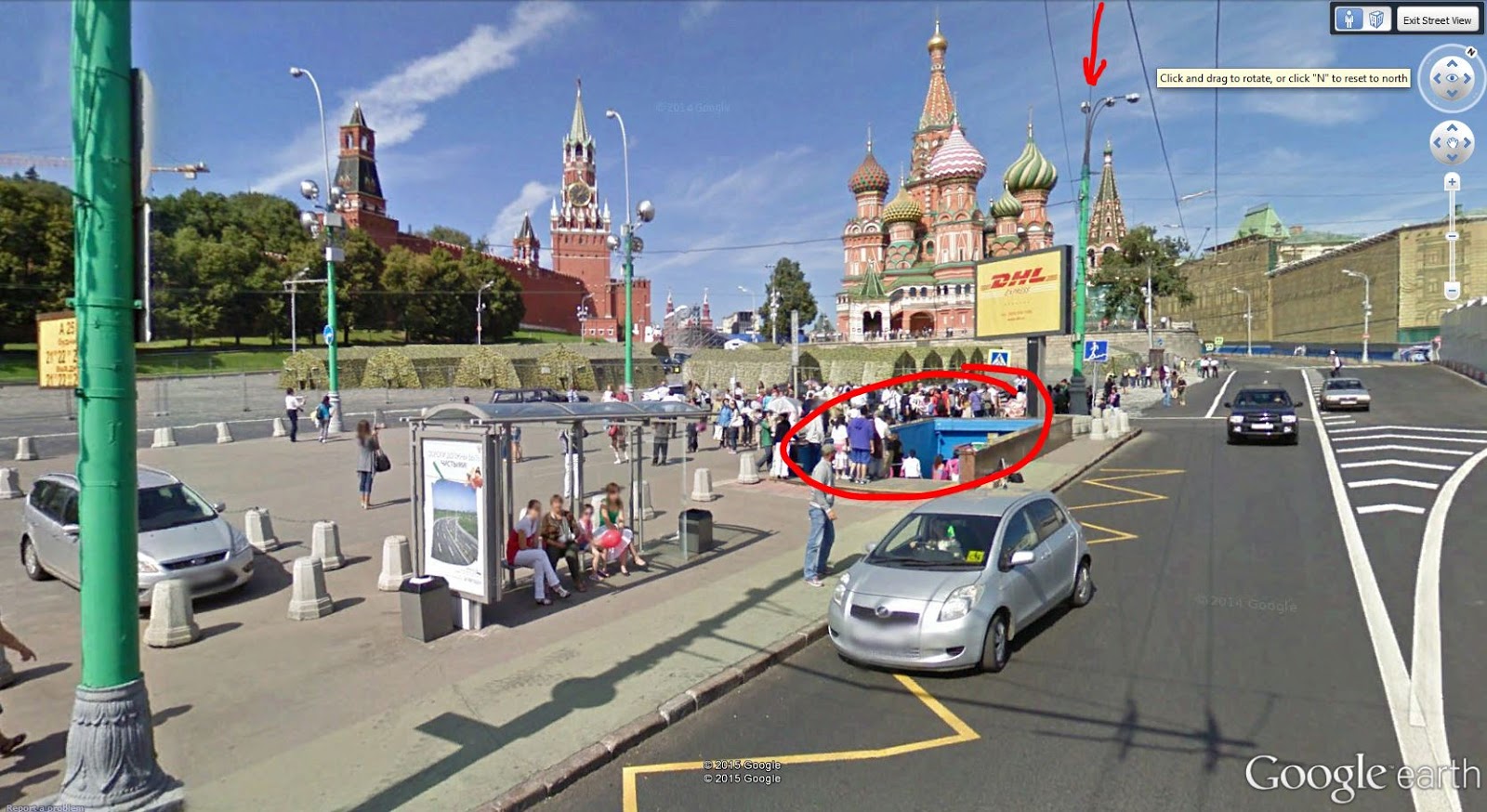 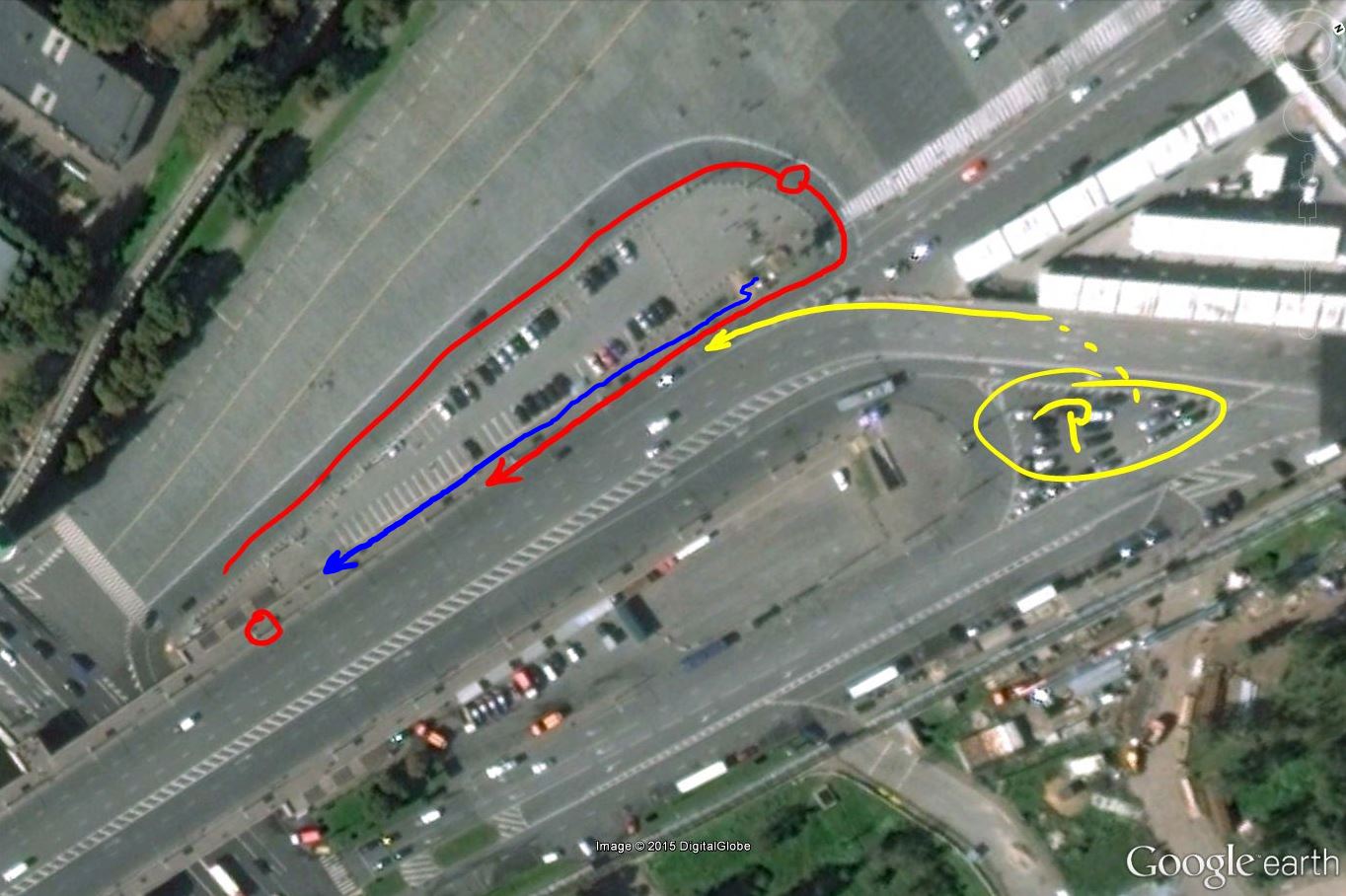 There are only two seconds between the moment when Nemtsov disappears behind the cleaning car and the moment when we see the killer start to run towards the flee car!
It means he must have been an EXCELLENT gunner and he must have had an automatic rifle (with silencer?) to be able to fire 6 shots (of which four hit; one in the head and three in the body).


Cleaning car
Google search on 'Moscow garbage car' gives this result, which MAY fit the profile of the 'cleaning car' in the video: 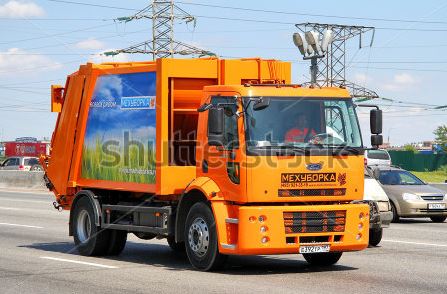 This is a different car, but it's just to show how easy it is to jump on and off these things: 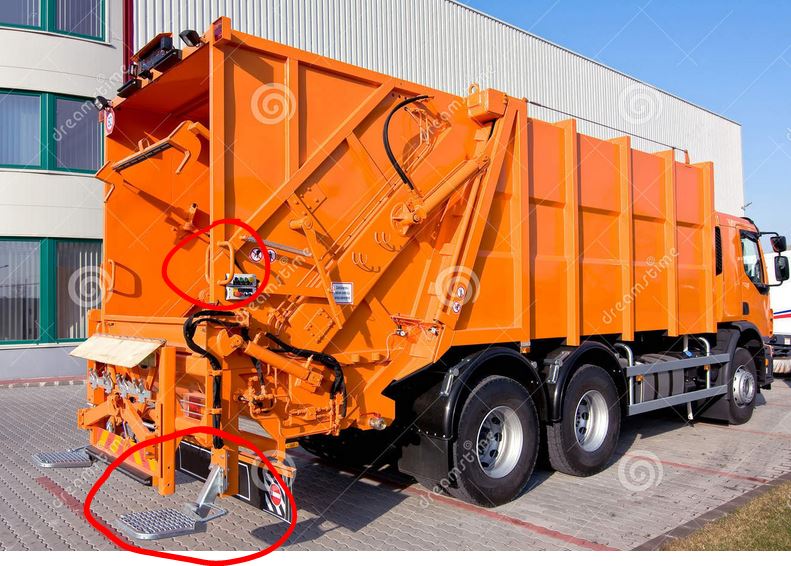 Here is another one that also may fit the profile: 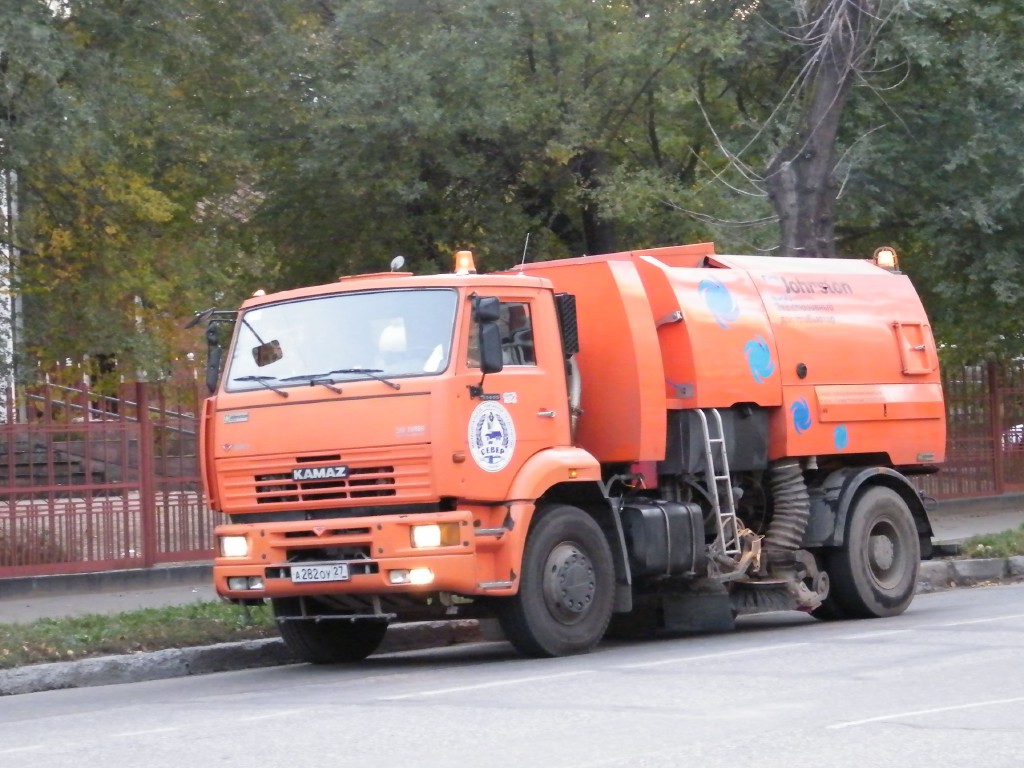 And yet another one: 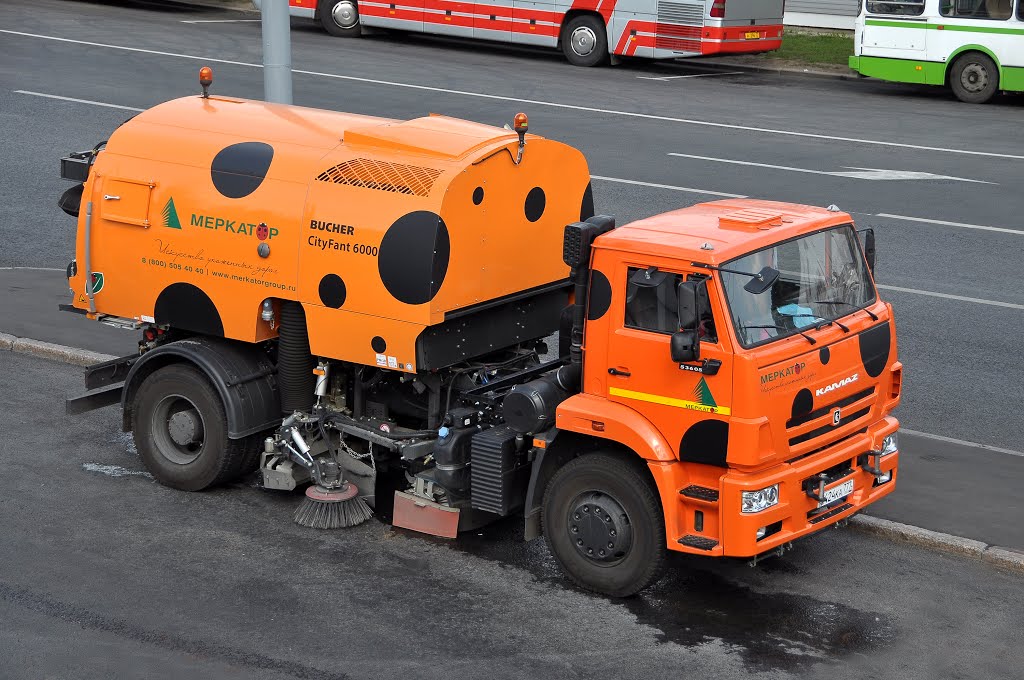 Conclusions
The video seems to be real, because the location EXACTLY fits the known murder spot. It does not seem likely that such a video could have been prepared in advance.

Cleaning car was part of the operation
Therefore it seems very likely that the cleaning car is part of the operation.
Since Nemtsov was shot from behind and the cleaning car already catched up with them when the murder took place, it does not seem likely that the assassin traveled on the passenger seat next to the driver. He had to open and close the door and that may have drawn their attention. It seems likely that he had traveled on the back of the car. He could easily jump on and off and could also see if there were no other people following them.

Using a cleaning car gives a lot of advantage: you can drive slowly, draw no attention, wait if necessary and thus pick EXACTLY the right moment (with no other people nearby), you can hide the weapon in the back and the car partially blocks view of the scene.

The cleaning car first can be seen at 23:28:50. The murder took place at 23:31:15. That is some two and a half minutes. It means the command to start the operation had already been given some three minutes before the murder for that car to arrive at the right time.

It does seem like the assassin had been following the couple already before he jumped on the car. It means he could have IDed them long before the killing moment and followed them on a safe distance towards the bridge. By jumping on the cleaning car, he could catch up with them without running.

Flee car
All the flee car had to do was to wait until the cleaning car got on the bridge, see the hit man jump on and then get to follow them from a distance to slowly catch up.
Furthermore: that flee car is NOT white... (as the Moscow police suggested).


It all does look like a REALLY WELL orchestrated operation.

No traffic from behind
Totally weird is that there is no traffic at all behind them. Such a moment is very hard to pick, especially when you can see that there are many cars before the assassination moment. Right after the car picks up the assassin, new cars start arriving again. This indicates there had been some 'orchestration' here too.
There are no traffic lights at the roads leading to this location, but a stopping car, crossing people and things like that may easily halt the traffic long enough for 10-20 seconds.


Here you can see the Moscow Police investigating the crime scene: 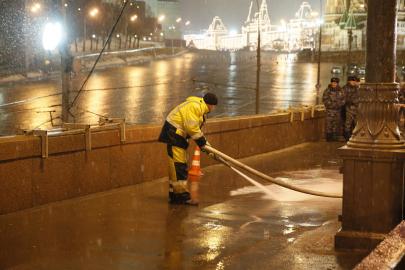 Here you can see CCTV cameras right on the bridge in top of the lantern, that must have filmed everything:

But I guess nobody is ever going to see that footage...


Why would the cleaning car stop and the driver talk to the woman?
It is VERY convenient to immediately have somebody present at the scene. In any such given high stress situation it always takes a lot of time for victims to realize what had happened. Often the incident has to be reconstructed from fragments of memories. It means right after the incident they are most susceptible for disinfo. We see this happening in Ukraine all the time when civilians get bombed by Russian shells... next thing is that Russian journos arrive and explain them how and that  'Ukraine did it'.
Also by being present immediately they can quickly find out what she had actually seen or not.

Who did it?
NOBODY will be able to murder right in front of the Kremlin and get away uncaught. Putin immediately came with a statement that this is 'a provocation'. How does he know? In general you can only say any such things AFTER you have been well informed about what happened. So we see the same pattern as with all Kremlin-murders:

So the answer is: this was a well planned Kremlin murder. Who gave the order? How do I know, but at least Putin must have known about it. Nobody will be allowed to execute a murder like this so close to the Kremlin without Putin approving it.


UPDATE
A dashcam video has been published from a car driving the exact same route as the cleaning car a couple of minutes after the murder:

It does match with part of the other video. This must be the dashcam car: 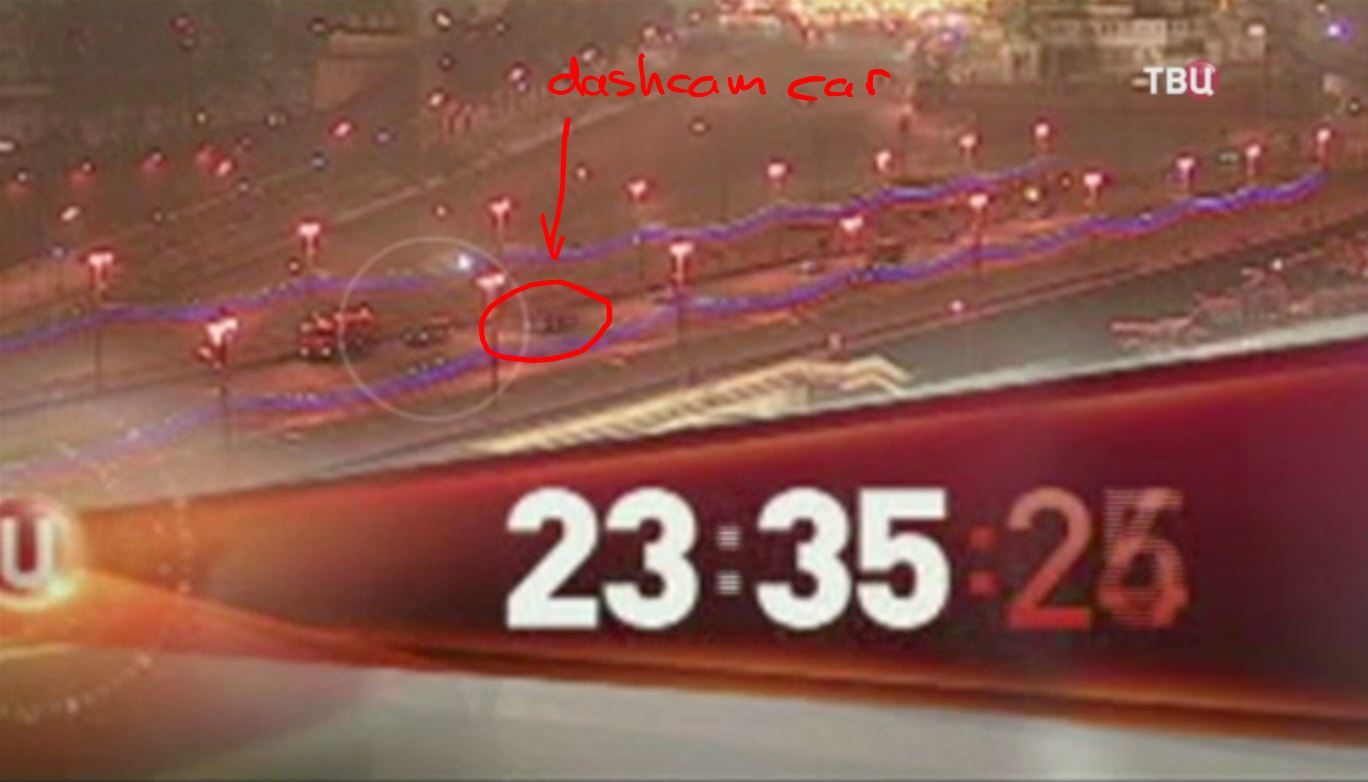 But for the rest it does not reveal anything really new.

But it is a confirmation that these videos are real and not fabricated.
Posted by Ukraine@war at 3:54 PM