WHY all of a sudden the Ukrainian army can bite back (in Donetsk)?

Yesterday 27-5 their was heavy fighting going on in Donetsk.
Over the past months insurgents had been able to take over police stations, city halls and other government buildings. They had been robbing, murdering, creating chaos with little to no resistance.
Whenever the Ukrainian army tried to fight back, they surrendered, were destroyed or miserably failed to do their mission.
And fresh after the elections the airport of Donetsk was going to be taken over. To have an air-bridge with Russia of course...

And what happened? The Ukrainian army fought back!!
They retook the airport.
Russian rebels were running for their lives! See the movies here.
And had these criminals been able to drive around freely in their open trucks, creating havoc... now their trucks are being destroyed!

The BIG QUESTION is... why is this possible now all of a sudden?
Why is the army finally biting back?

Tweet me your answers djp3tros  and the best ones will be published here:


@djp3tros @MiddleEast_BRK they had no orders to strike big not to mess election. Not anymore
— Wagner Rastelli (@w_rastelli) 27 mei 2014 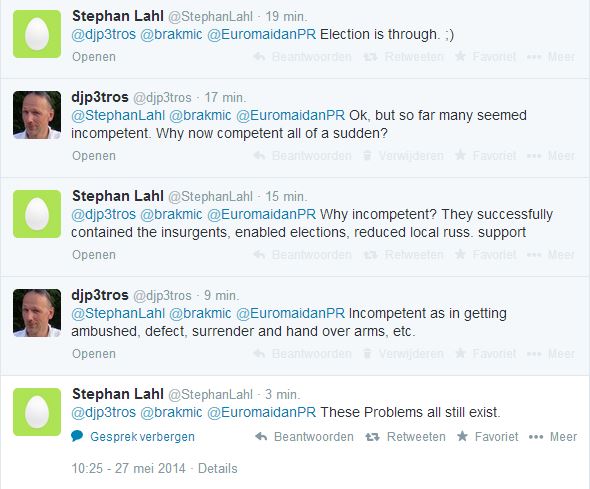 Maybe one consideration could also be this: it becomes more and more clear that Putin will not go for a full scale open invasion with his own army. The threat of this possibility made many police officers and soldiers defect. And the army had to restrain their actions and operate very carefully as not to get caught in a mousetrap.
Now that open invasion seems highly unlikely, a more aggressive counter strike can be made against the foreign mercenaries.

And another thing might be: many civilians manned the barricades in the beginning, which meant the army needed to be careful too. Now that the boys went home and the professionals came in, the army is going to talk business? As Taavi points out here:


@djp3tros same result will be everywhere where separatists try something without the protecting backs of civilians.
— Taavi Tuisk (@taavituisk) 27 mei 2014

Another viewpoint comes from Jack about the Right Sector:


- @djp3tros The angle you're missing is that Kiev oligarchs may not want Right Sector fighters to survive this war. Think about it carefully
— Jack Crowley (@MensNews) 27 mei 2014

- @djp3tros They are the spine of the National Guard and the spine of Kolomoisky's private battalions (Dnepr, Azov, Donbass, Odessa)
— Jack Crowley (@MensNews) 27 mei 2014

- @djp3tros Right Sector is most significant factor in this conflict as they are the 2,000 men most willing to kill for a centalized Ukraine
— Jack Crowley (@MensNews) 27 mei 2014

My opinion about this:
This too much of conspiracy theory to me, for several reasons:

Don't get me wrong: I don't like Right Sector, Nazis, neo-Nazis or any extremist violent group. But the real threat comes from OUTSIDE Ukraine right now. Not from inside...