This is the view in the first frames of the video: 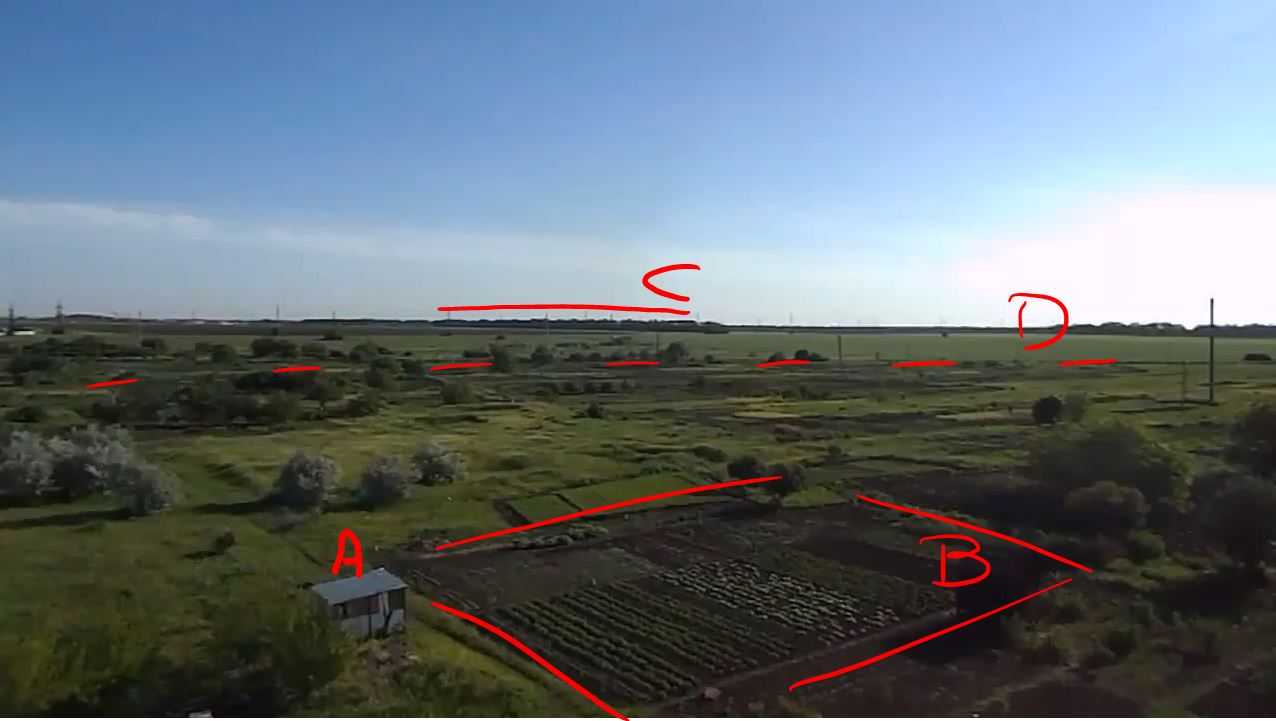 There are not many flats in the neighbourhood so this is the corresponding one with zoomed in view: 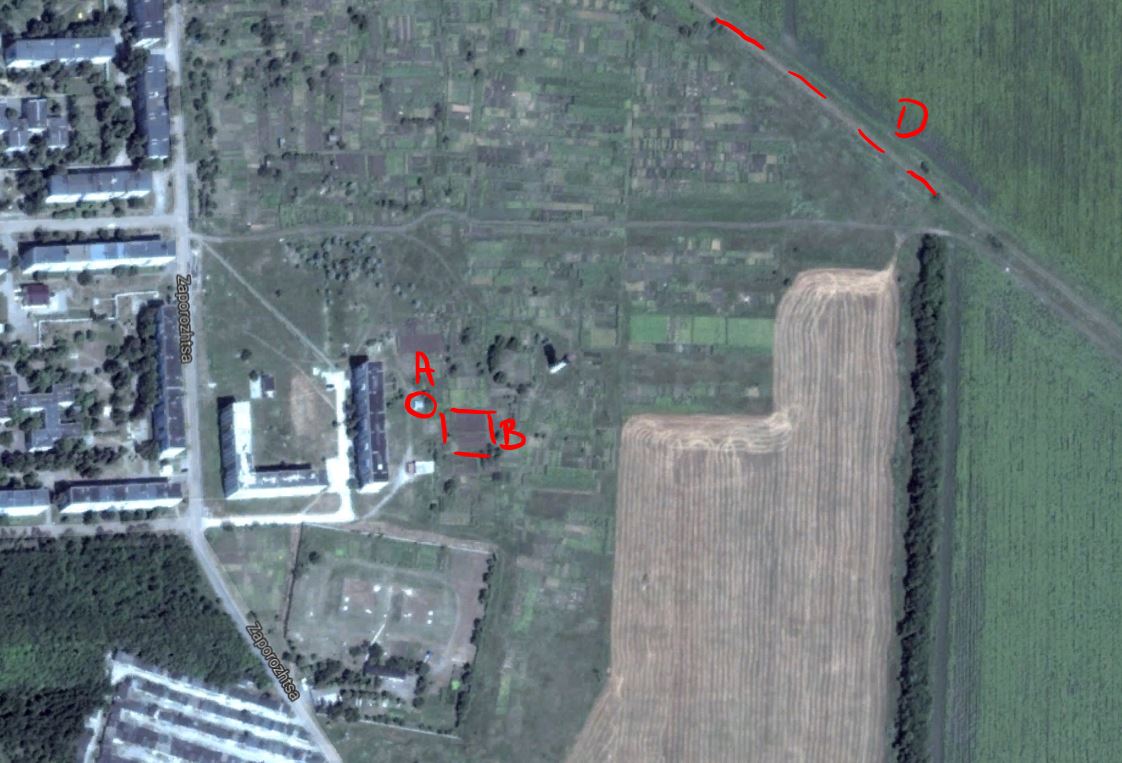 And zoomed out view: 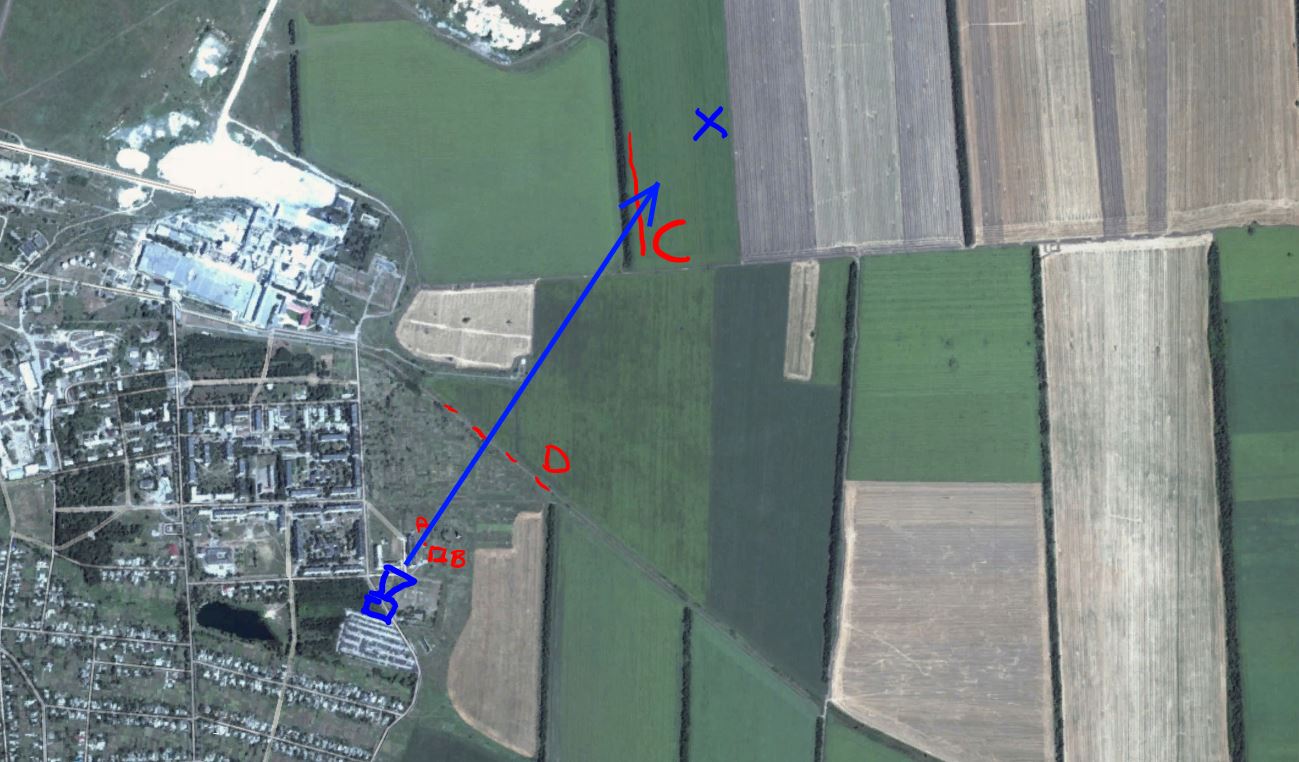 The helicopter appears from position blue X and travels approximately along the yellow path. The red dots show where the Ukrainian checkpoint could have been. The blue arrows show how the camera view is. 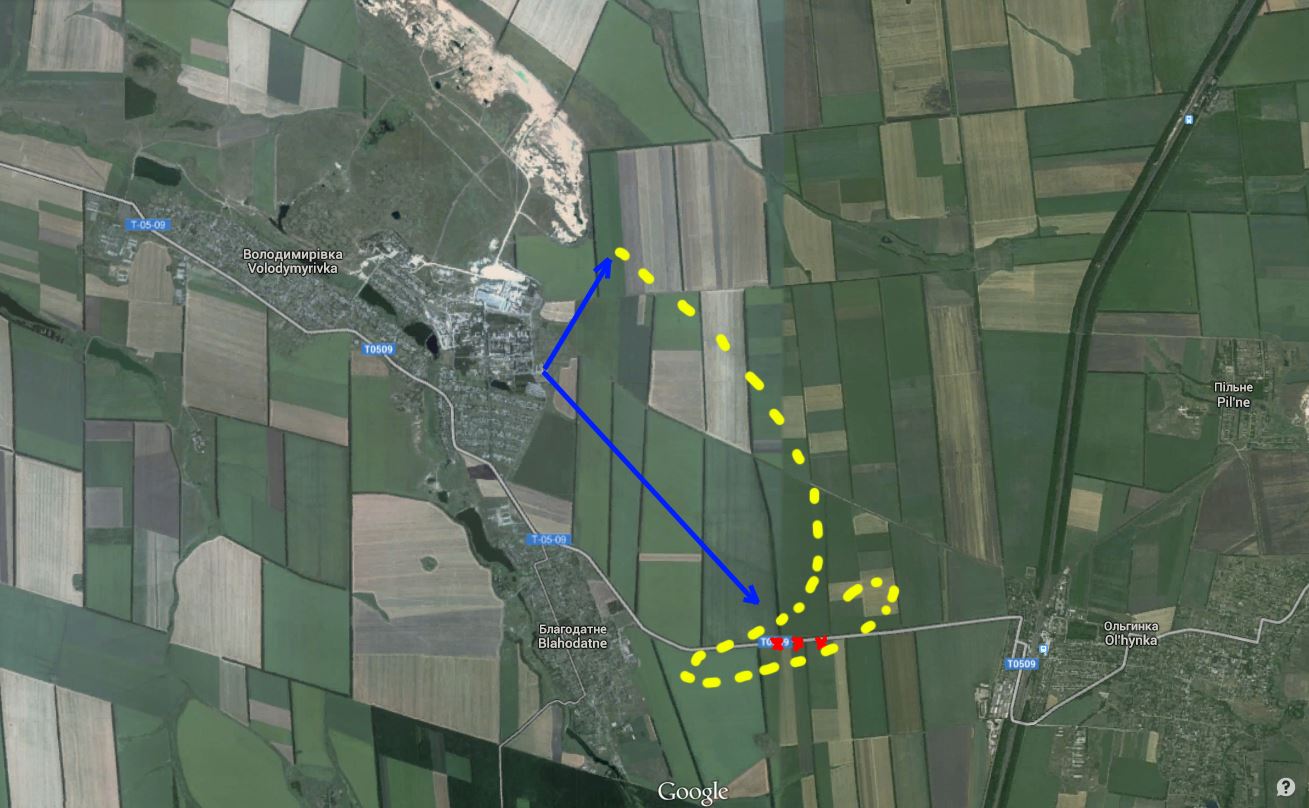 Google maps of the location:

The helicopter appears after 10 seconds in the video, but can be heard from the beginning. It is highly probable that the helicopters were parked behind the treeline. The people may have known about this. That is why they started filming after they heard the attack, saw the smoke and heard the engines of the helicopters start.

When the lady sees them, she says: aha... Like in: it is confirmed, there they are.

After takeoff they flight quite high above the treeline. 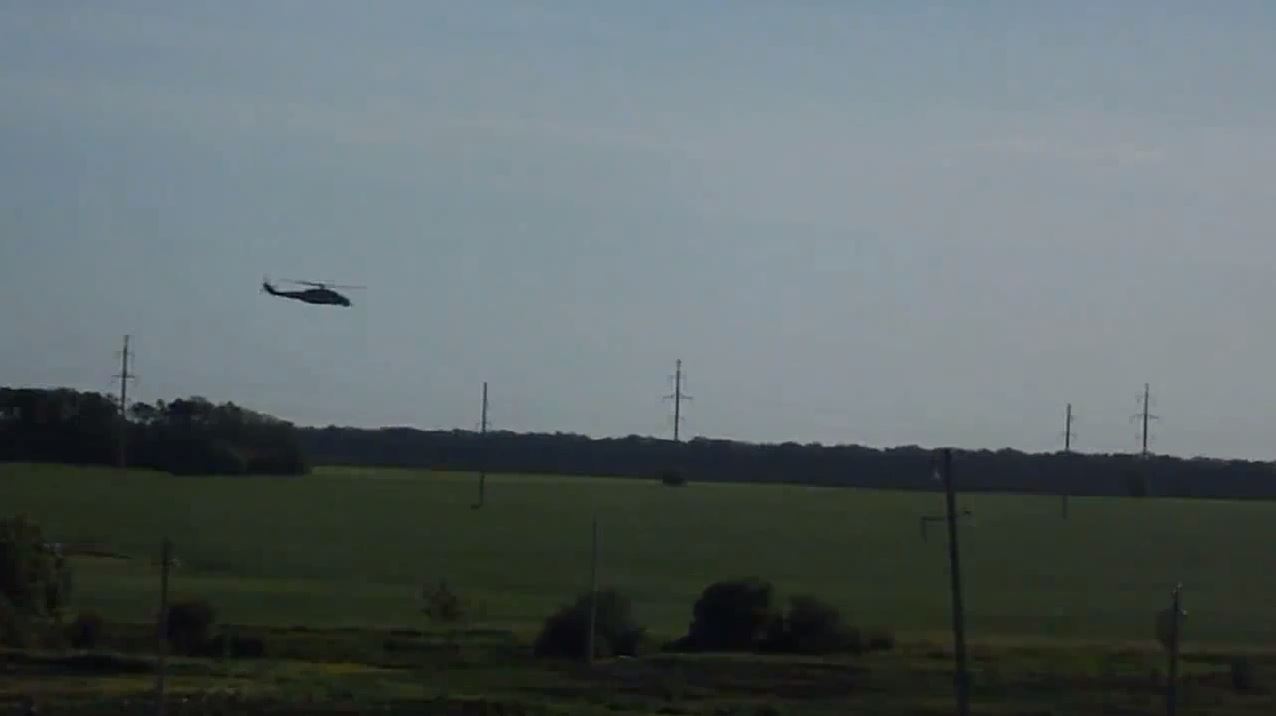 But then they try to fly as low as possible. 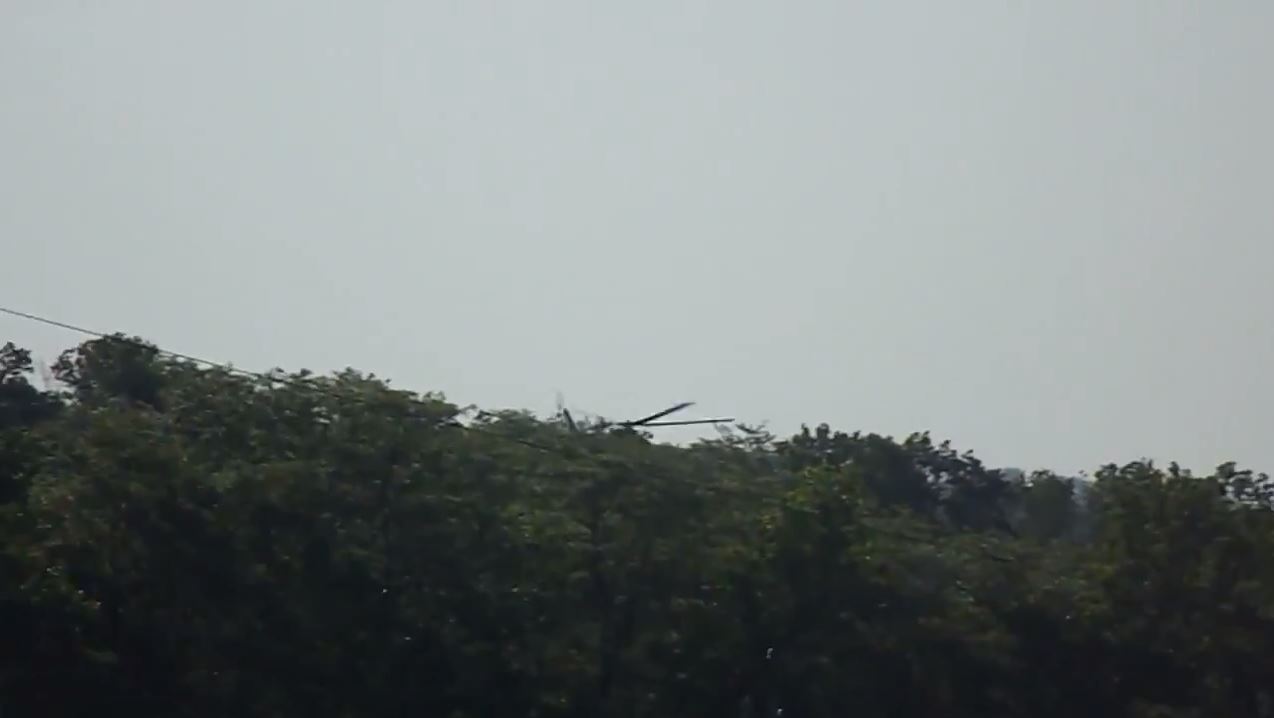 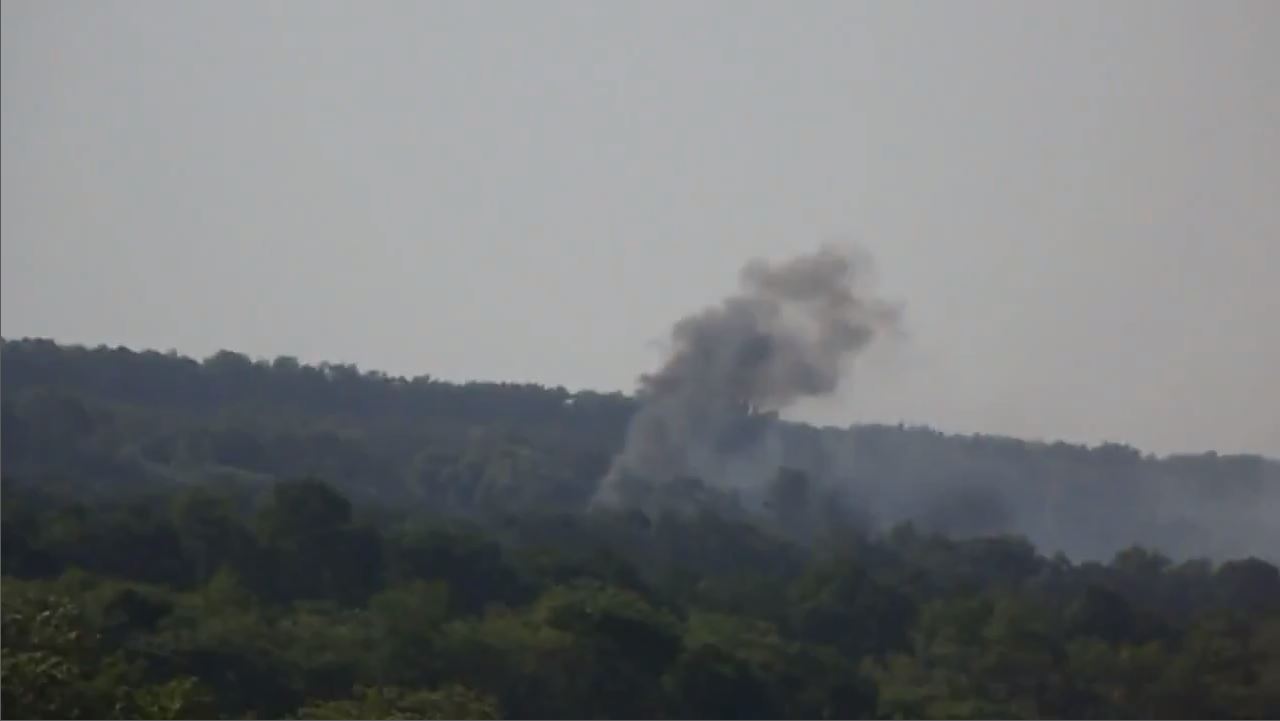 At 1:21:06 we can see the area before the smoke, clear of any smoke trails from rockets. 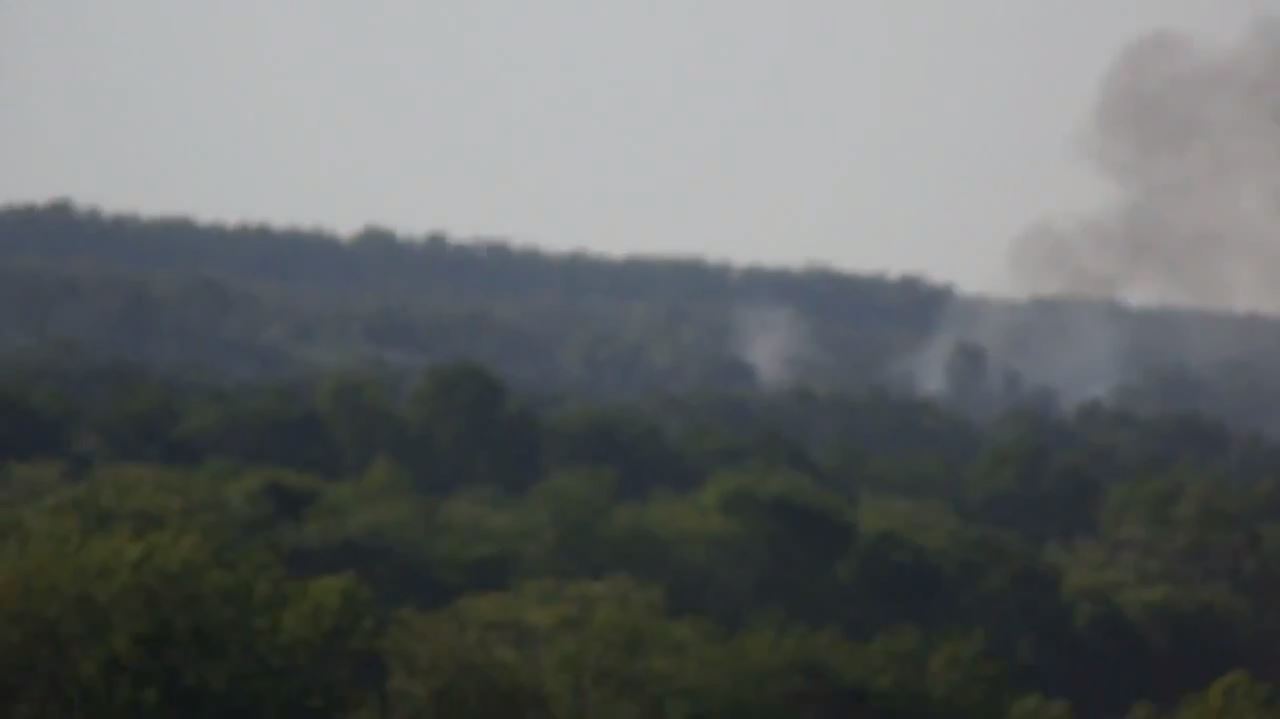 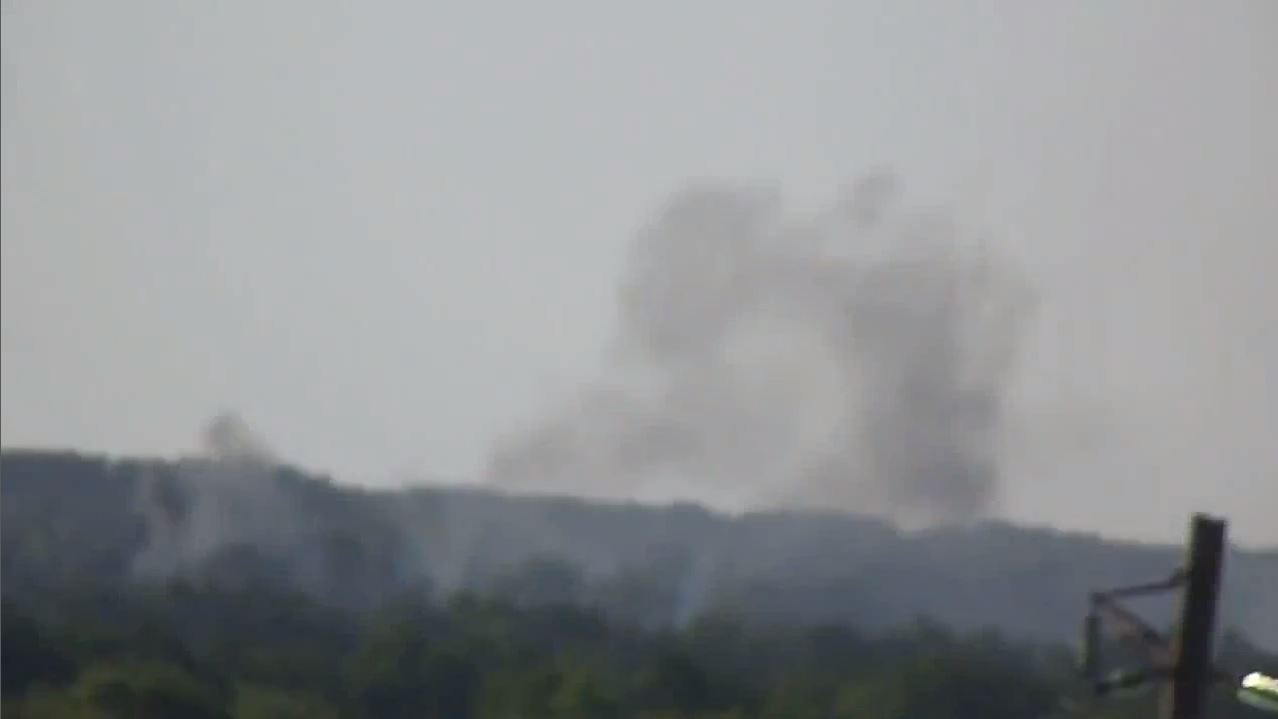 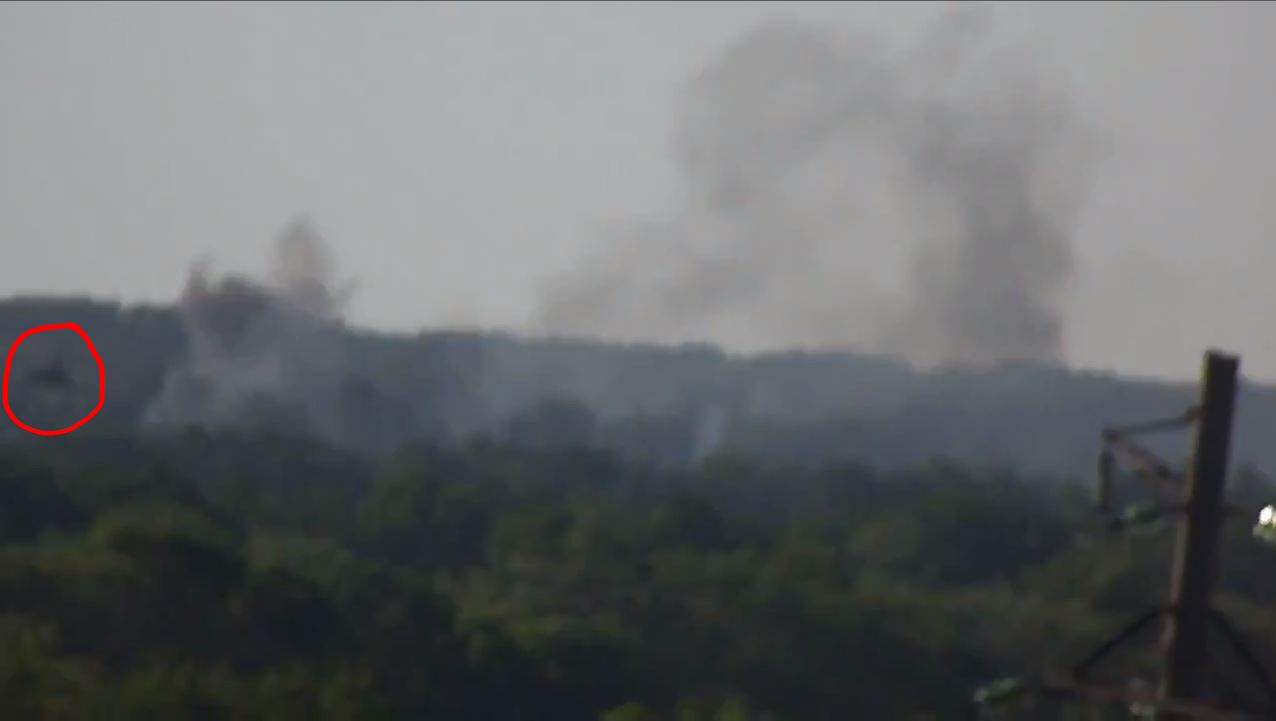 At 1:35:06 a big explosion can be seen. By then the helicopter is already far to the right. 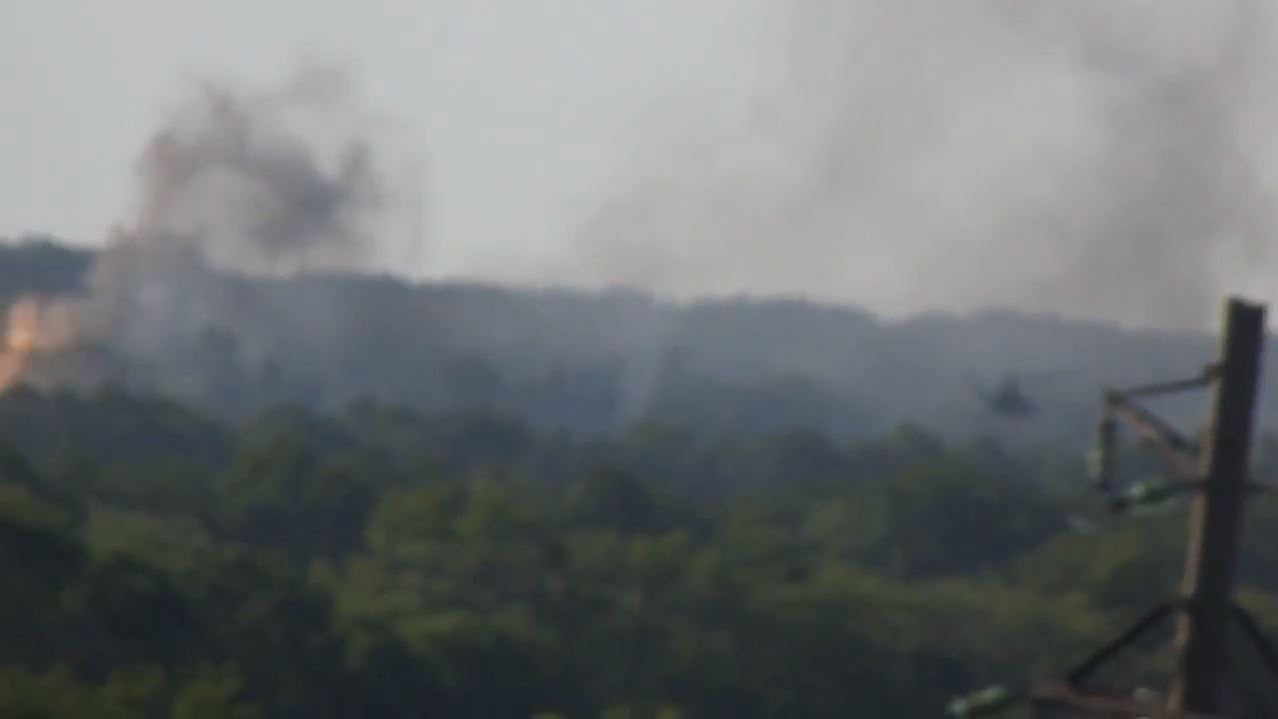 In none of the frames in between, it can be seen that the helicopter has been firing anything.

When this is compared to the video from the soldier, no helicopter can be heard from their position, nor can a helicopter be seen before the big explosion: 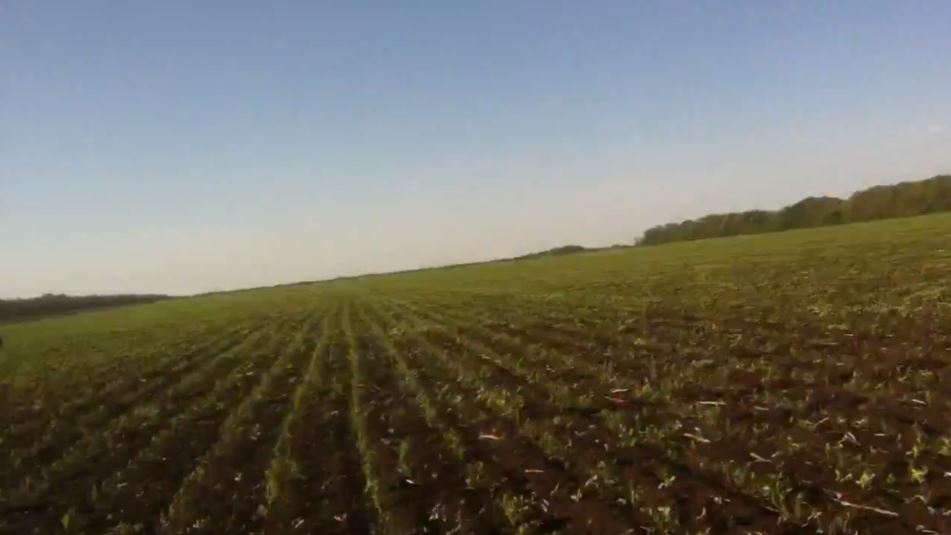 This means the helicopter APPEARS to fly towards the scene, but in reality it doesn't. This is because the camera is zoomed in a lot and compresses the distances. 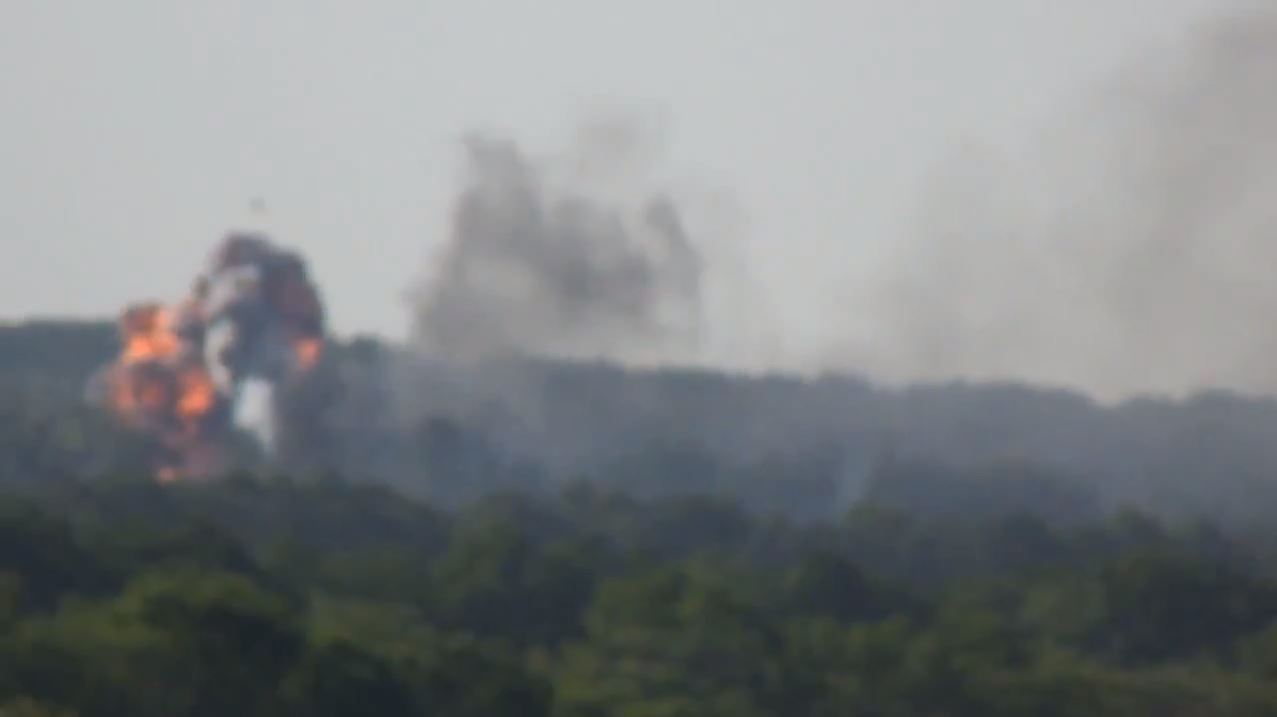 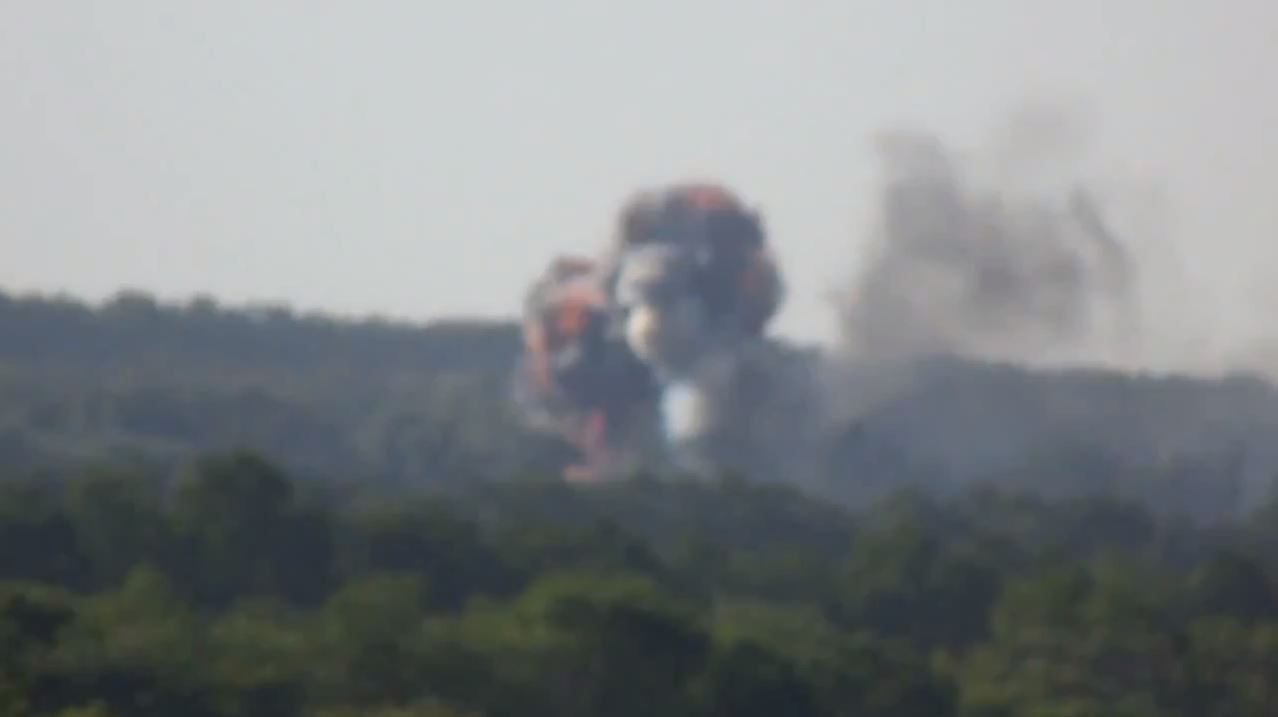 During all this no machine gun fire can be heard, nor can the launch of a rocket be heard.
What has happened is that (a truck with) ammunition boxes was on fire and started to explode, setting off even more ammunition.

This must have scared the hell out of the helicopter pilot who was flying not that far away from this scene. He did not even use flares the first time he was flying by, but 35 seconds later (at 2:31:10) when he returns he is using flares. He is afraid anti-air missiles might be used against him, so he fires them as a precaution, all the way along the route. 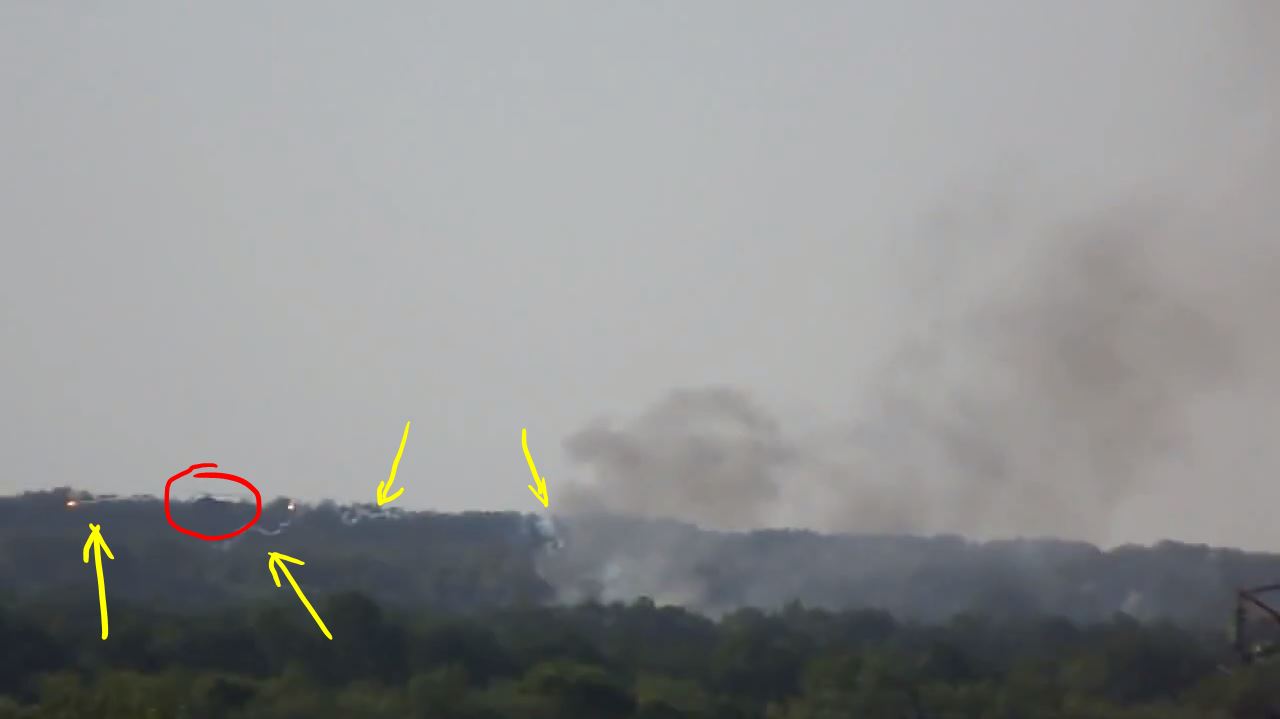 At 3:08:15 the second pilot also comes in view from the right. He had been making a big detour. He does not seem to fire flares, maybe because he sees no missiles are being used against them.
Meanwhile the exploding ammunition can still be heard.

Still, exploding ammunition can be heard.

From 4:43:12 one helicopter seems to have gone far back and the other one approaches again with flares. 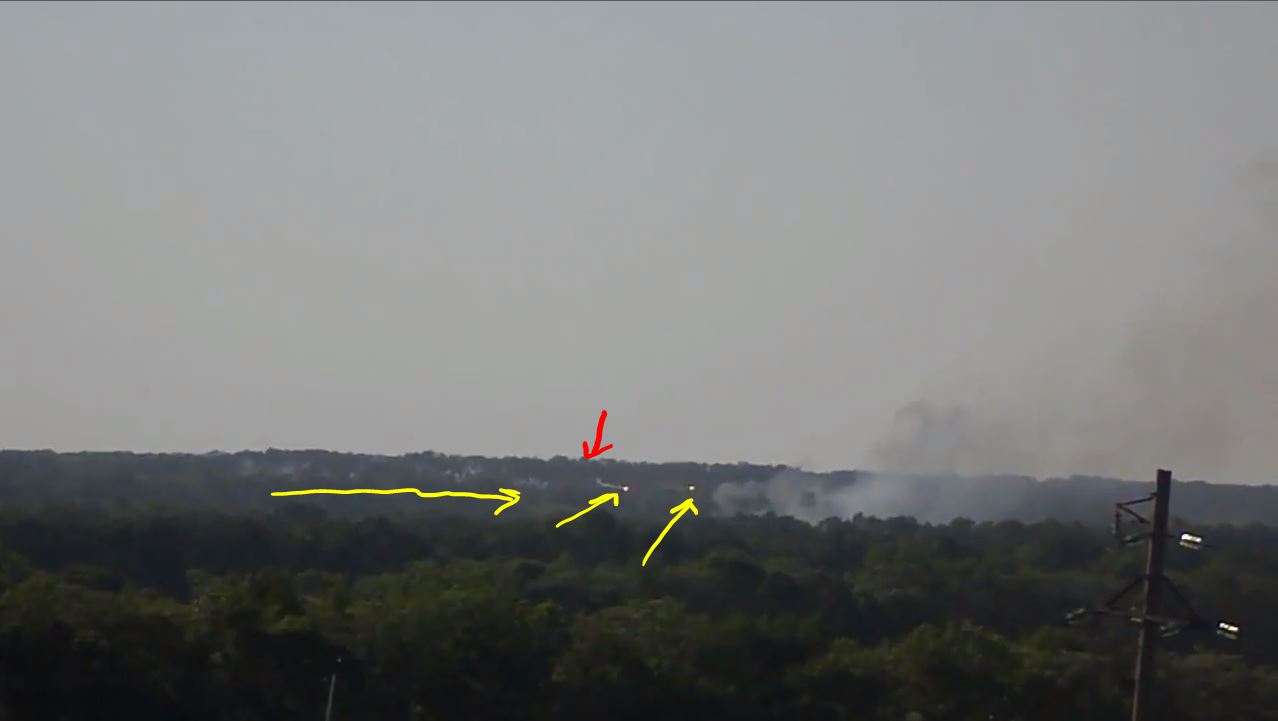 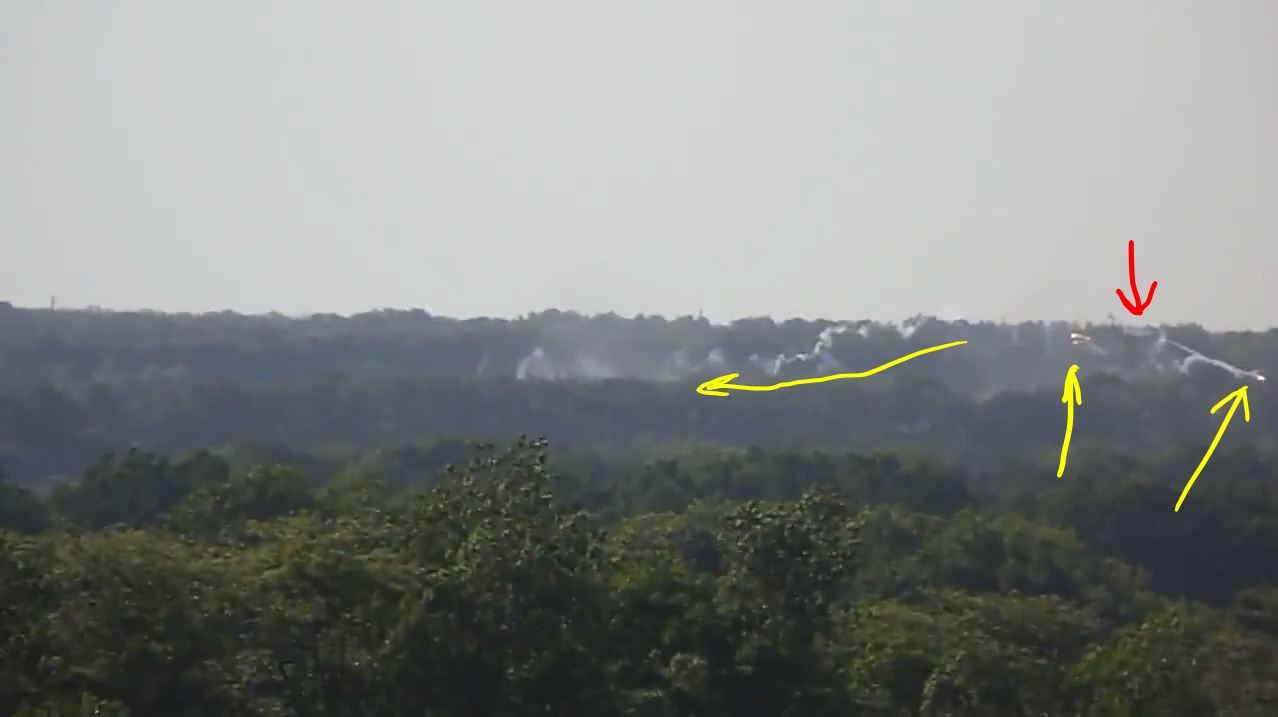 This time the helicopter seems to be hovering in one position. After the flares are gone, the helicopter is also seems to gone.
It might have landed on the location. The other helicopters seems to have been returned.

Conclusion:
The helicopter pilots have not been doing much. They arrived when ammunition exploded and this scared (and confused?) them a lot? After that, they had been flying by with flares, assessing the situation. No rocket has been fired. The source of the machinegun fire is unclear. It could not be determined whether this was from the helicopters or from something else or even AT the helicopters.

For the people alive on the ground, it may have been as confusing as well. A helicopter flies by and a big explosion follows. Was it the helicopter causing this? Yet thorough analysis helps to determine what really happened.

You can find all the videos concerning this attack here.

IMPORTANT UPDATE:
The helicopter is firing on the green van of the attackers who were still at the scene looting.