Here is a map containing them all: 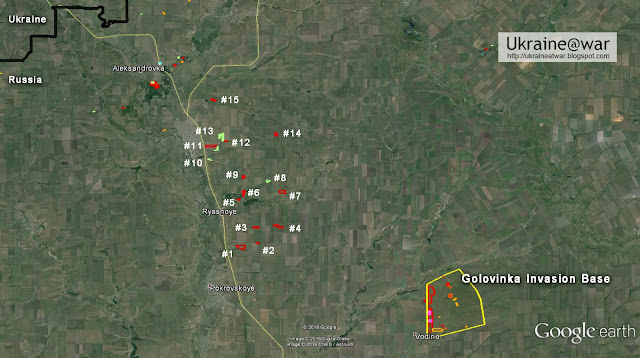 We'll have a look at each of them. 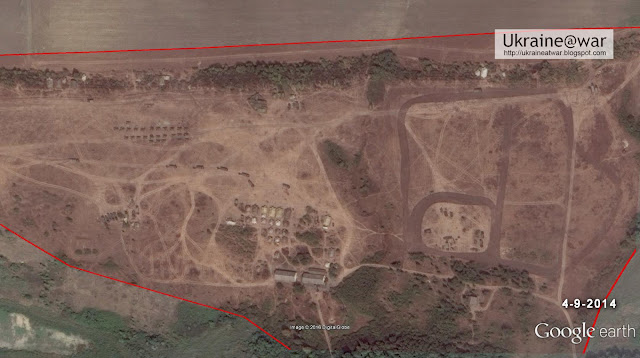 Formations tanks can be seen, as well as a convoy with towed guns just arriving at the camp. A lot of tents are present. 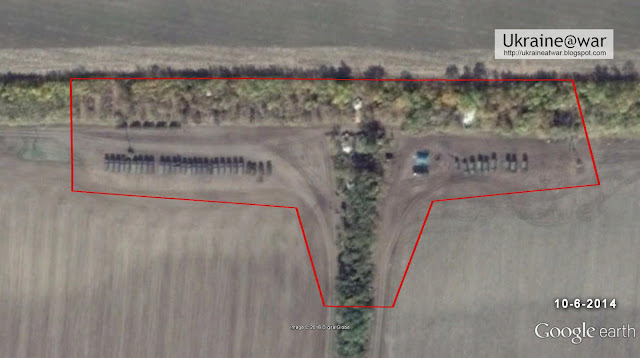 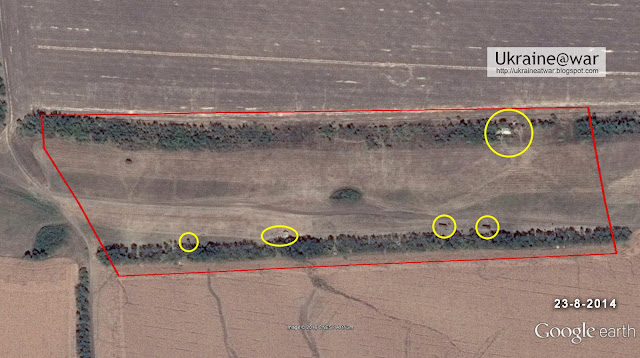 Most of the camp already abandoned, but still some vehicles and tent can be seen. 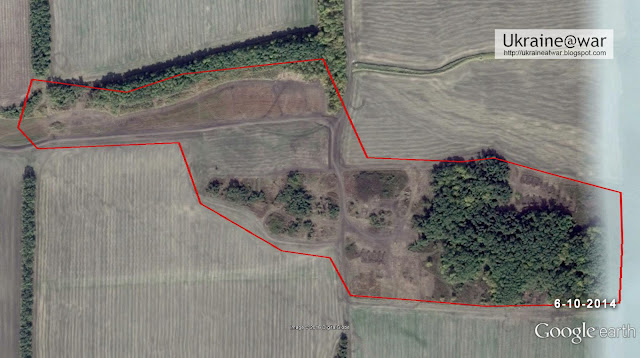 The 6-10-2014 image shows the extent of the camp, although abandoned. On the 4-9 image vehicles can be seen when the image is enhanced (it's obscured by flares of clouds): 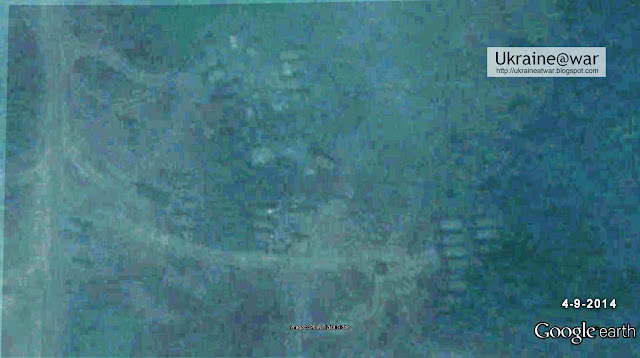 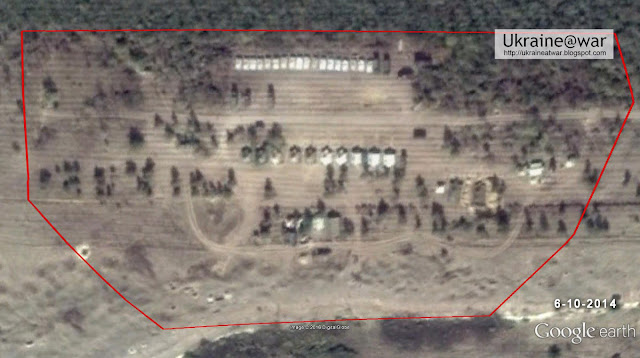 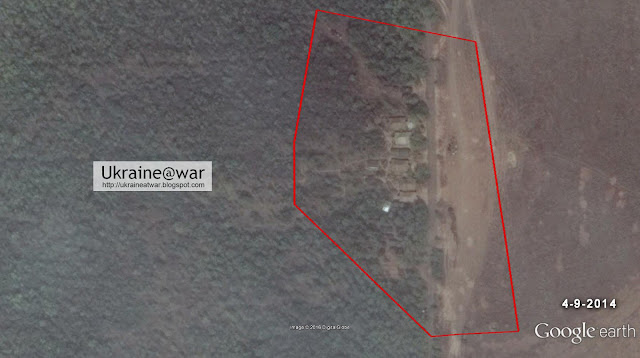 Some tents and tracks in the trees. 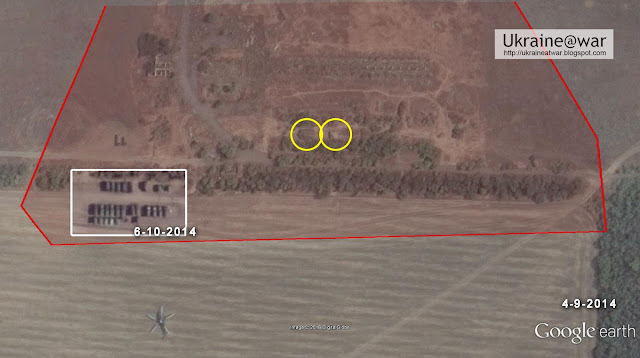 On 4-9 mostly abandoned, but a parked helicopter can be seen. Inset shows group of vehicles on 6-10. 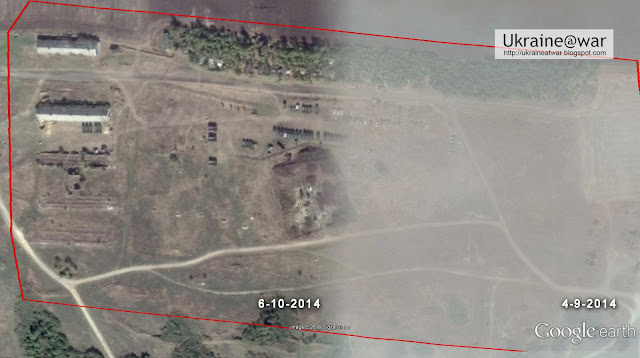 The 6-10 image ends right in the middle. lots of vehicles can be seen, as well as tents.
The 4-9 half shows another kind of vehicles. 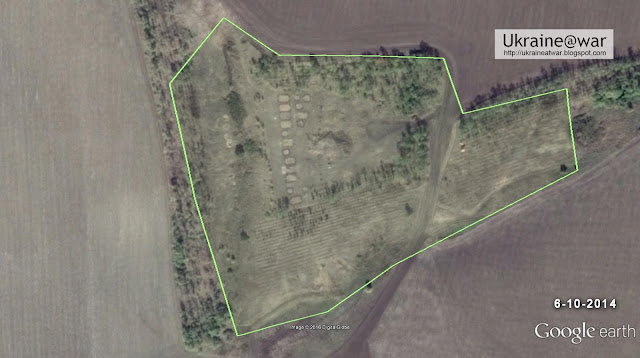 Abandoned camp, but places where tents stood, can clearly be seen. 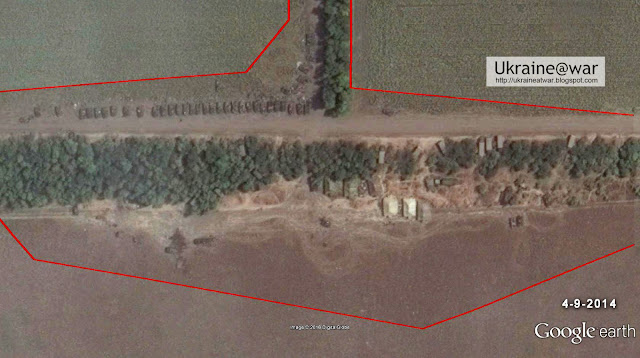 Again many vehicles as well as tents. 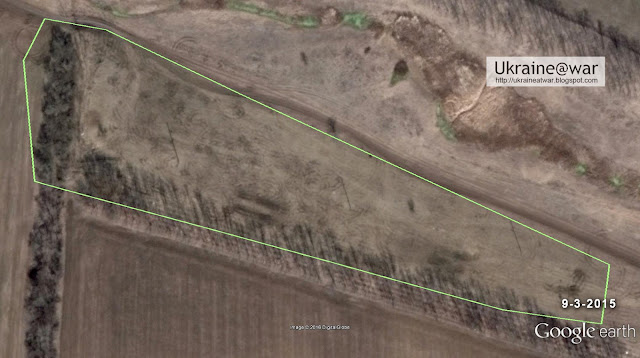 Only traces can be seen on several dates, but the area has clearly been used. 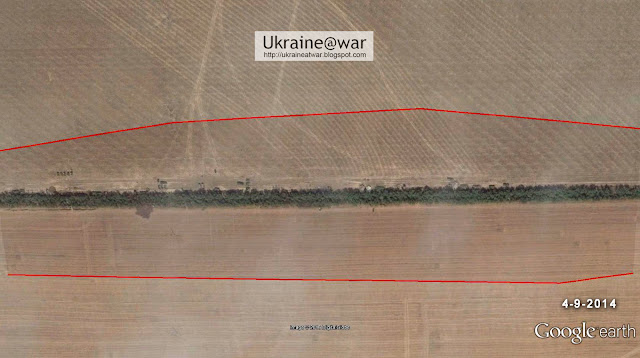 Image enhanced. Vehicles and tents. On the 6-10 image more positions of tents can be seen and also an area closeby that must have been used too. 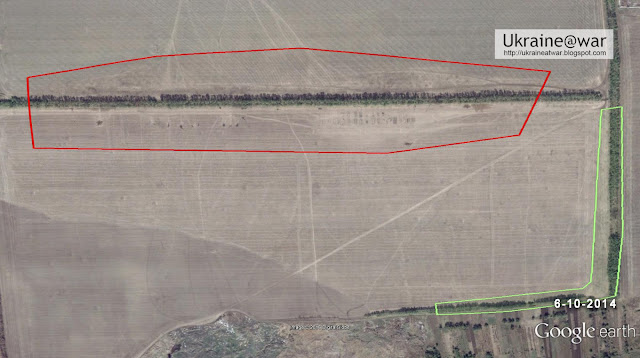 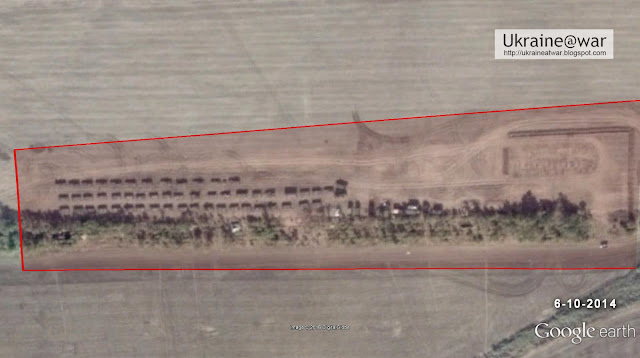 Lots of vehicles ready to move out it seems. 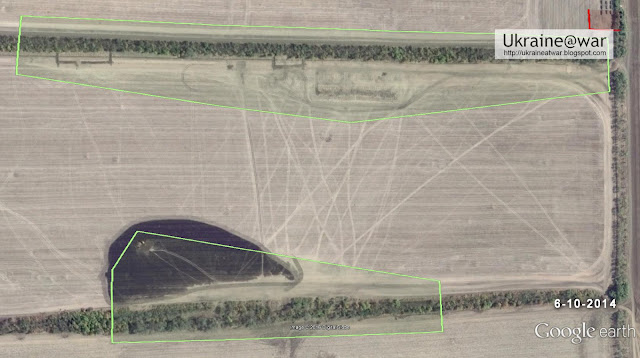 Abandoned area, but lots of unusual traces can be seen, as well as an area where a big fire had happened. 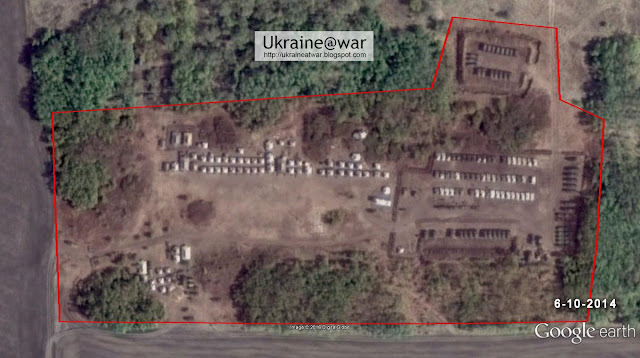 Did you count them?
Munition depot in the top. 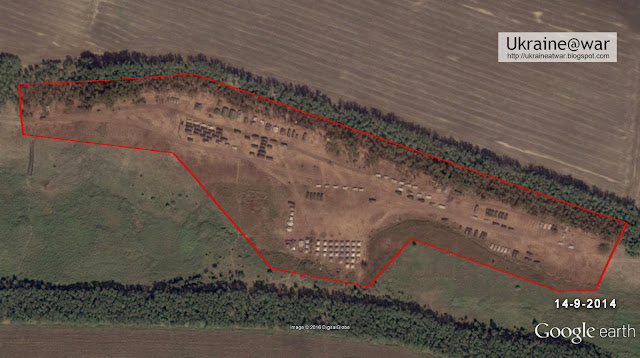 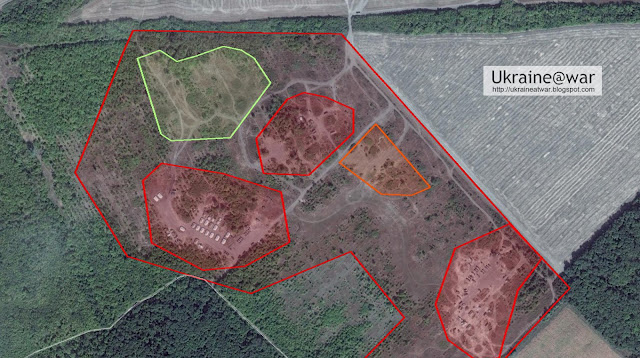 This camp is South of Alekseevka and Aleksandrovka and North of the other camps and has been noticed by many already for a long time. It shows a variety of consistencies on different dates. It is on the same route and would fulfill a similar role as the other camps


Conclusion
All the areas together are of similar size as the Golovinka-base. So far these were unnoticed, because there were no satellite image available of that area. And when they became available they were still hard to detect, because they were further away from the Ukrainian border and spread out over a large area. Nevertheless these are significant forces.

Most of the camps appear on the 4-9 date. Some are already visible on 23-8, but that image only covers the bottom part of the area.

The position of these camps is between Golovinka base and the route to either Marinovka, Amvrossivka or Ilovaisk. So most likely they were used as temporary hubs/stops on the way from Golovinka to Ukraine.

Since the village of Ryasnoye is central and closeby, lets call these camps the Ryasnoye camps.


UPDATE 4-6-2016
It turns out that the train station in Pokrovskoye has been used throughout 2014-2015 to unload lots of armor, as these satellite images show: 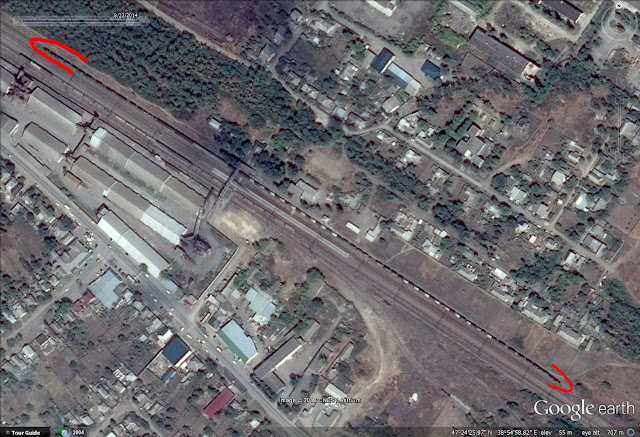 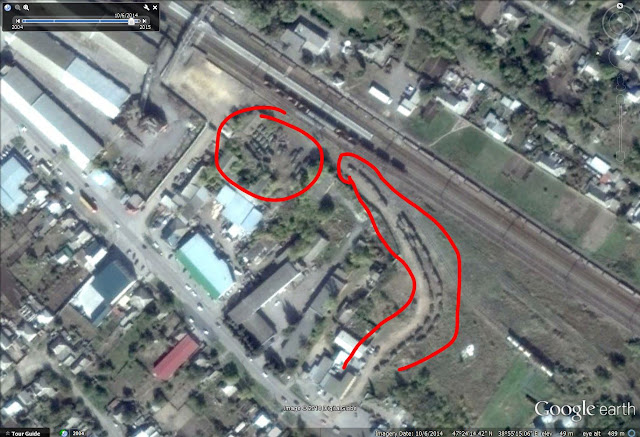 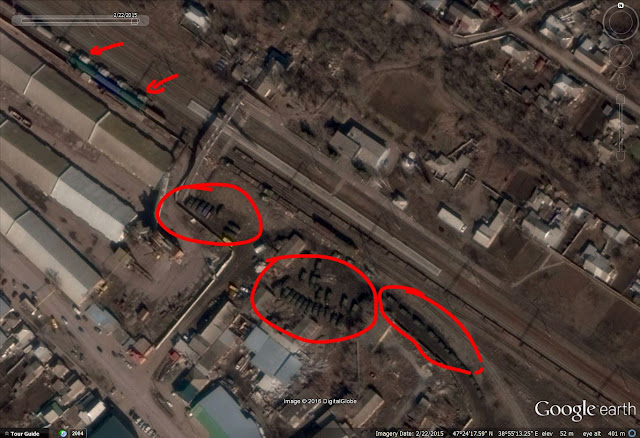 So that seems to be the logical explanation for all these camps. After unloading they need to dwell somewhere. That was North of Pokrovskoye... on their way into Ukraine: 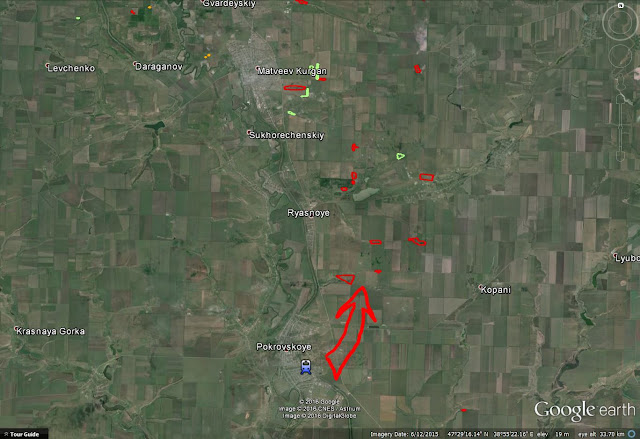