It turns out that there is one single piece of key evidence in the reconstruction of how and from which location MH17 was shot down. It is this photo: 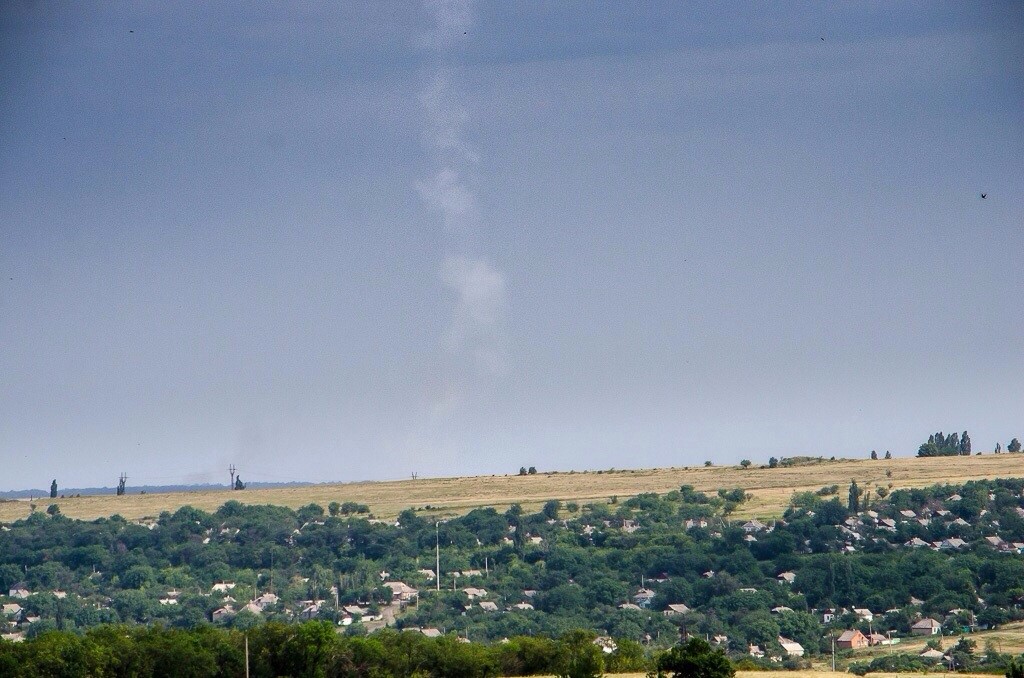 So far no videos or other photos have appeared on the net showing either the launch or the smoke. It means we have to try to trace back the origin and the authenticity of this photo.

Personally I received the photo through @rrubanov:

The timestamp of his tweet is 18:25 July 17th. The crash was reported to be around 17:00, so there is one and a half hour in between. But at that time nobody knew it was a civilian airplane.

At 18:14 still official reports came in that a Ukrainian AN-26 had been shot down:

So when at 18:25, 11 minutes later, somebody tweets a photo of the trail of the missile, it is impossible to have photoshopped something credible with the intention to hide the truth and 'blame the Russians'.

I contacted @rrubanov and he said he recieved the tweet from @WowihaY. here it is:

Timestamp 18:23, 2 minutes earlier. He says he got the photo from a witness.

Now the funny thing is that @Wowiha made a very similar calculation as I did. In the middle of the night at 1:27 he has already been tweeting about it!!!

He says that he found a second witness and so he is drawing the lines of sight on a map. He gets an approximate launch location.

This is (within the margin of error) exactly the same as what I calculated independently from him. And he does this within 6 hours.

The next day at 19:08 he tweets to have found a 3rd witness and indicates the area with an upside down Google Earth screenshot:


Translation of the text is:


Launch was made from this area! We weren't wrong. Third person confirm.
Said from field across Сlay Aggregate (rrubanov — maybe some facility or quarry produce clay aggregate)
Btw, there is line of rabit holes (rrubanov -- defence fighting position) there.
One more person can show exact, but ...

So bear in mind that this local guy from Torez tweeted within a timeframe of 6 to 27 hours after the crash about information of three witnesses from whom one of them he received a photo. Based on that information he had already indicated from what area the missile had been launched. And it is in sync with how I calculated the area.

I asked him if he had the original photo with the EXIF info. He does. It has already been released to the Ukrainian Security Service. It can not be made public (now) because it will reveal who the author is and we don't want to get this person killed.
So I asked him the next question: 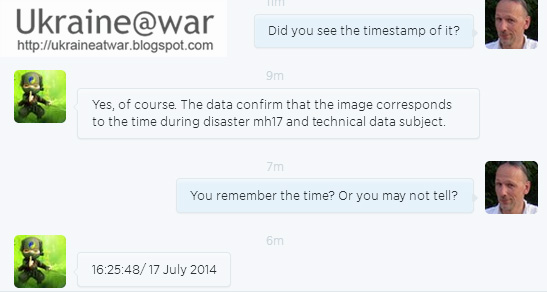 UPDATE:
Some journos who are on location in East-Ukraine made a reconstruction of events on July 17th as they have seen it and been able to figure it out from eye-witnesses. This is, as you can understand, completely independent from what I'm doing here based on information from social media. You can find their report here. Everything they write is in sync with what I write about here. This is the time they report:

Conclusion: this photo is genuine.

Also see: (pro)Russian conversations recorded from Zello just after missile launch
Also see the entire route that the BUK traveled into Ukraine
Also see: how the Russians took down MH17
Also see: satellite images reveal how the BUK has been driving near the launch location