Without ISIS, the world would simply want to take out/remove Assad. And it might have done so already.
But because of ISIS, it is not that simple. Basically ISIS is a Russian/Assad created enemy to prevent the world from picking on Assad. To understand this, please see this excellent video explaining the complex situation in Syria:

These screenshots tell my point: 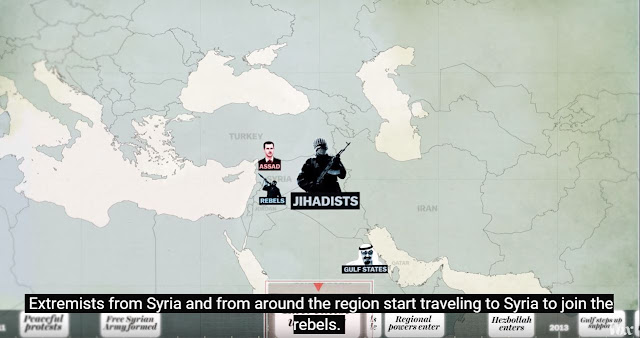 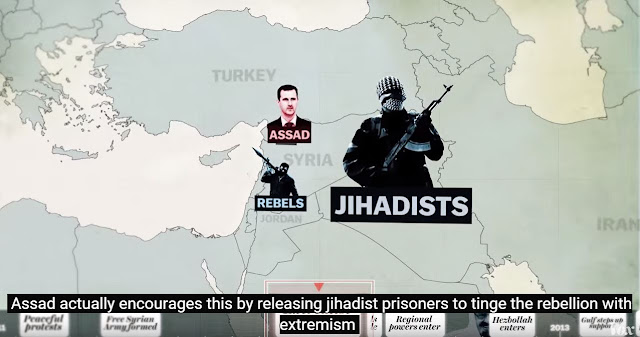 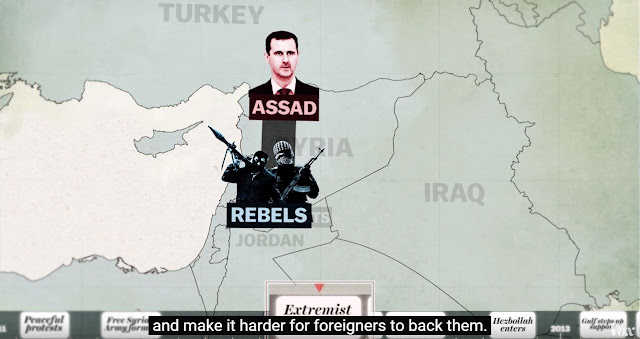 It says: "Extremists from Syria and from around the region start travelling to Syria to join the rebels. Assad actually encourages this by releasing jihadist prisoners to tinge the rebellion with extremism and make it harder for foreigners to back them."

Despite his extensive atrocities, Assad was not winning and he was losing ground. Putin jumps in and assists. But he is NOT targeting ISIS as he said he wanted to do:

This #HMG map sets out where #Russia has been targeting its airstrikes. Guess what? Not against ISIS #RussiaVsISIL pic.twitter.com/zinCXnE2eT
— David Riley (@rileyfo) October 17, 2015

Why not?
Russia & Assad do not want to take out ISIS. It is a divide-and-conquer-strategy. Keep the parties divided and thus you can rule all of them, including the West.

Now get this: the KGB invented International Islamic Terrorism...

If that's too much for you to read, read this:

Understand that Putin has been a KGB-officer for 16 years. It was also during HIS service that the KGB invented/promoted International Islamic Terrorism.
As a president he has learned from Chechnya that you can better pay terrorists to work for you than to fight them yourself. In Donbas Ukraine he has sent thousands of Chechen Islam Terrorists/mercenaries to fight his battles and die for him. All sent by his ally Kadyrov.

Putin Awards Ramzan Kadyrov ("Slave to Allah,Soldier for Putin") With The Order Of Honor http://t.co/HpiIUyqh1I via @RFERL
— tsnowbird (@tsnowbird5000) March 10, 2015

Now with the Paris Attacks, Putin's lies that he is in Syria to fight ISIS, suddenly find fertile ground:

It is really incomprehensible that Western political leaders want to do 'business' with Putin. The Kremlin is mafia. Russia benefits from conflicts in the world. Selling oil and weapons are their main source of income. They invaded Ukraine and annexed parts of it and they are not finished yet. They do the same with other neighbours. They keep butcher-Assad in the saddle so the Syria-conflict cannot come to an end. Russia is the State Sponsor of International Terrorism. How can you ally with this man?

His air raids in Syria are targeting markets, hospitals, schools, a bread factory... all this to make the population flee to Europe. He uses refugees as a weapon in a hybrid war against Europe/America.

Destroying a #hospital in Hader, a school in Maaret Al Numan and a bakery in Atareb....this is how #Russia is fighting #terrorism in #Syria.
— Asaad Hanna (@AsaadHannaa) November 17, 2015


And now Hollande wants us to work with him against ISIS?

With Hollande planning to meet Putin in Moscow next week, #Russia moves from strategic problem for Europe to an ally after #ParisAttacks.
— Andrew A. Michta (@andrewmichta) November 18, 2015


ISIS is a monster created, fed and manipulated by Assad/Putin to fight the West. Putin does not want it to get killed.

.@RT_Erdogan live at #ACsummit on the symbiotic relationship between ISIS & the Assad regime: "You would have to be blind not to see it."
— Chris Brown (@cdbrown91) November 19, 2015


(But Turkey is feeding the ISIS-monster too, to fight the Kurds. See this article for instance.)


That this monster can also turn AGAINST Russia/Putin, is what Putin experienced with the A321 full of Russians being brought down by a bomb in Sinai/Egypt. (Although it is not even clear yet that ISIS had been doing this.)
This caught him off-guard. In any other situation (such as TU154 with Polish government - "it was the pilot" , MH17 - "it was Ukraine", Total CEO Margerie - "it was drunk driver") Putin/the Kremlin had immediate/solid answers to what caused these tragedies, whereas the Dutch took a year with thorough investigation before coming to conclusions regarding MH17. With the A321, it took Putin two weeks before he gave a response. It means it must have caught him by surprise.
Now, with the Paris-attacks Putin suddenly knows: it was ISIS. The French and Russia have common enemies now. Hollande falls for this trick. And possibly a lot of other Western politicians too.


What Putin would really want, is to draw the West into a larger conflict with Islam. He wants the conflict in Syria to grow faaaaaar beyond its borders... meanwhile manipulating behind the scenes and having Russian territory itself staying out of the conflict zone or even growing by taking more pieces of its neighbours, all unattended by the West who is busy dealing with 'their own' (Putin created) problems.