Strange impact near School 63 proof that Ukraine fired it?

FIRST:
This video shows ANOTHER shell that hit near school 63 in Donetsk: 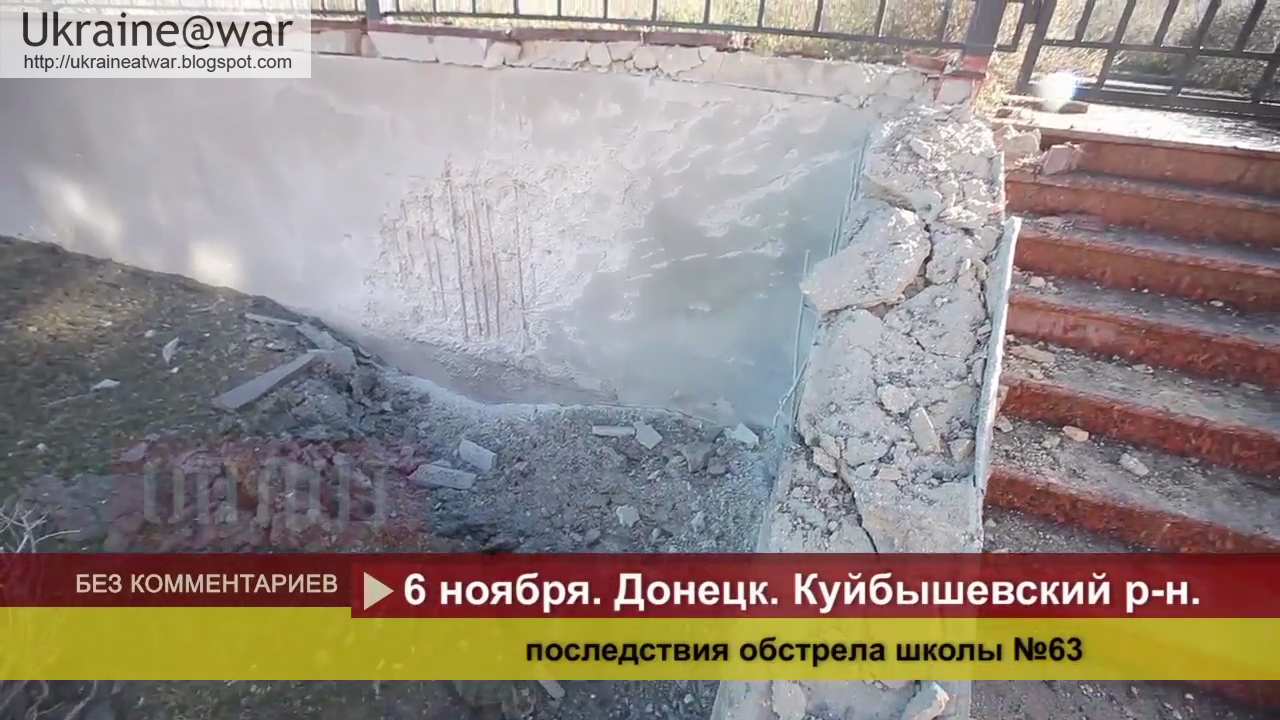 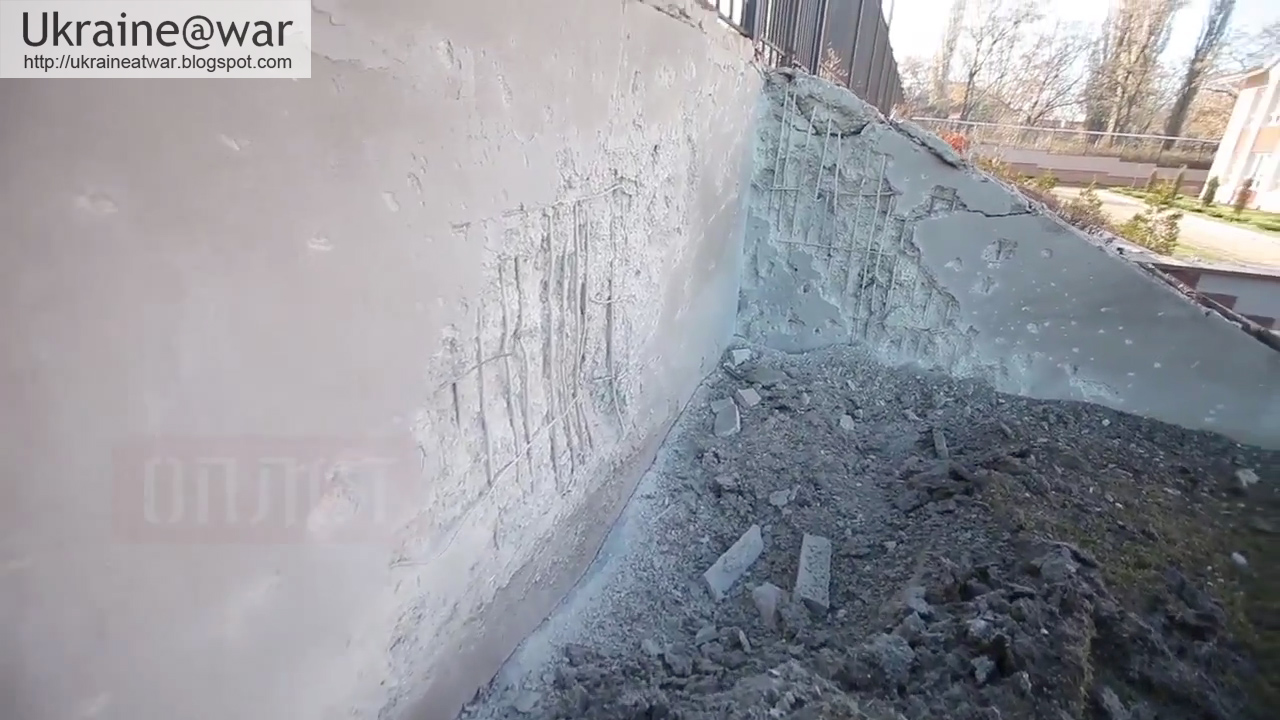 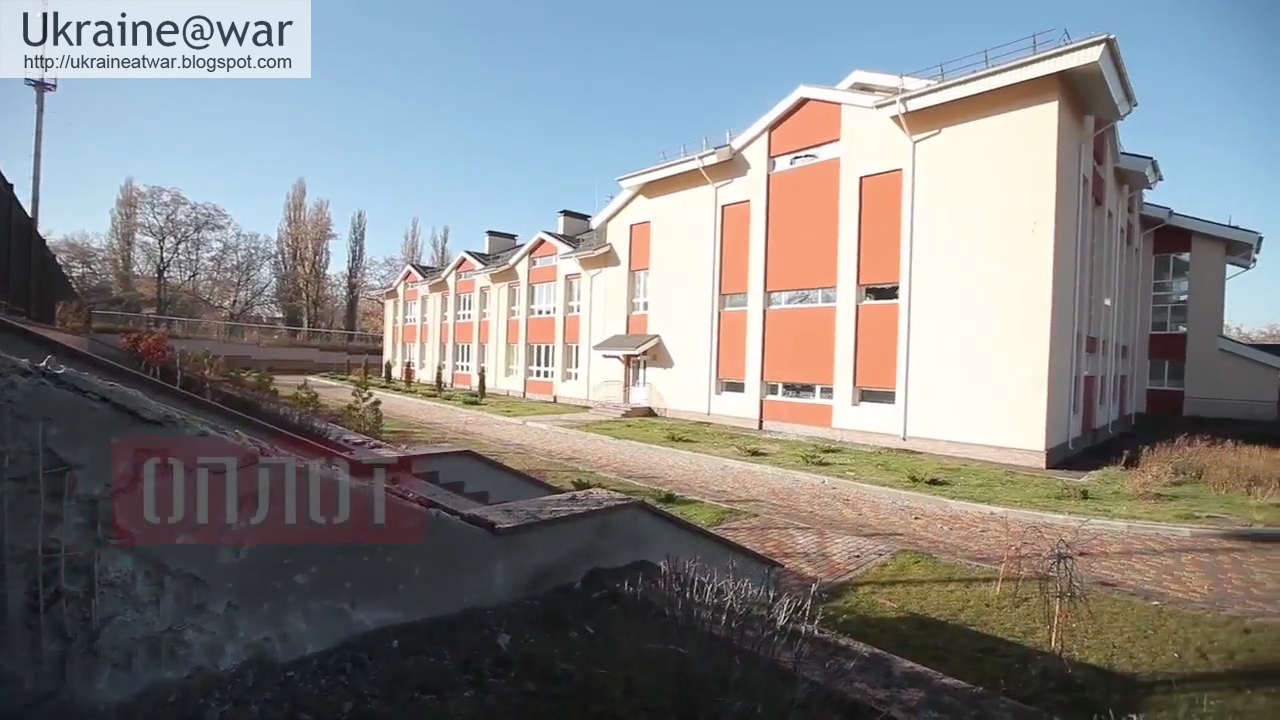 The last one shows the location and thus it can be positioned like this on the map (together with the other impact at the football field): 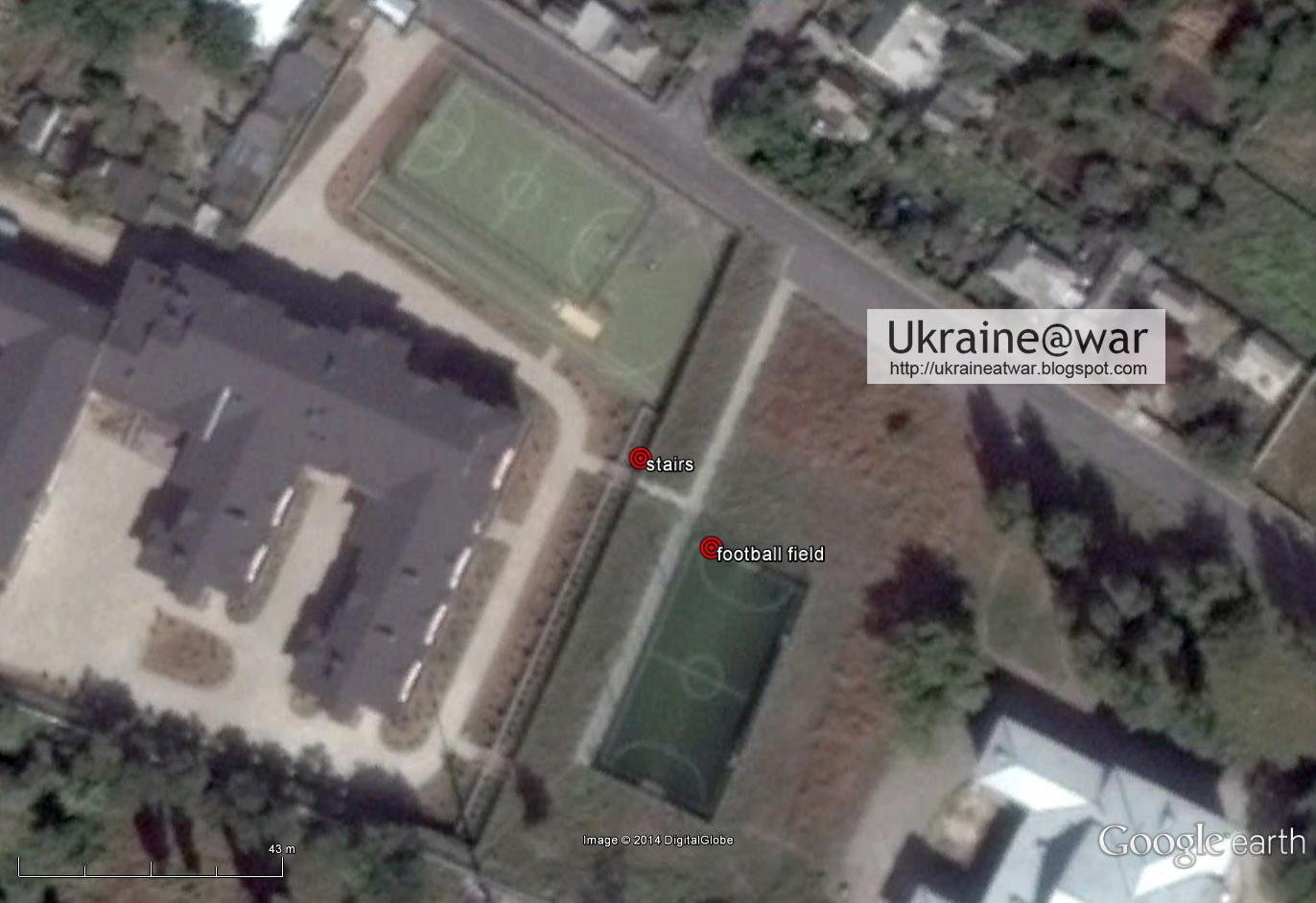 There are some strange features about this 'impact crater'. It has a really distinct blast pattern on the wall that has an UPWARD direction: 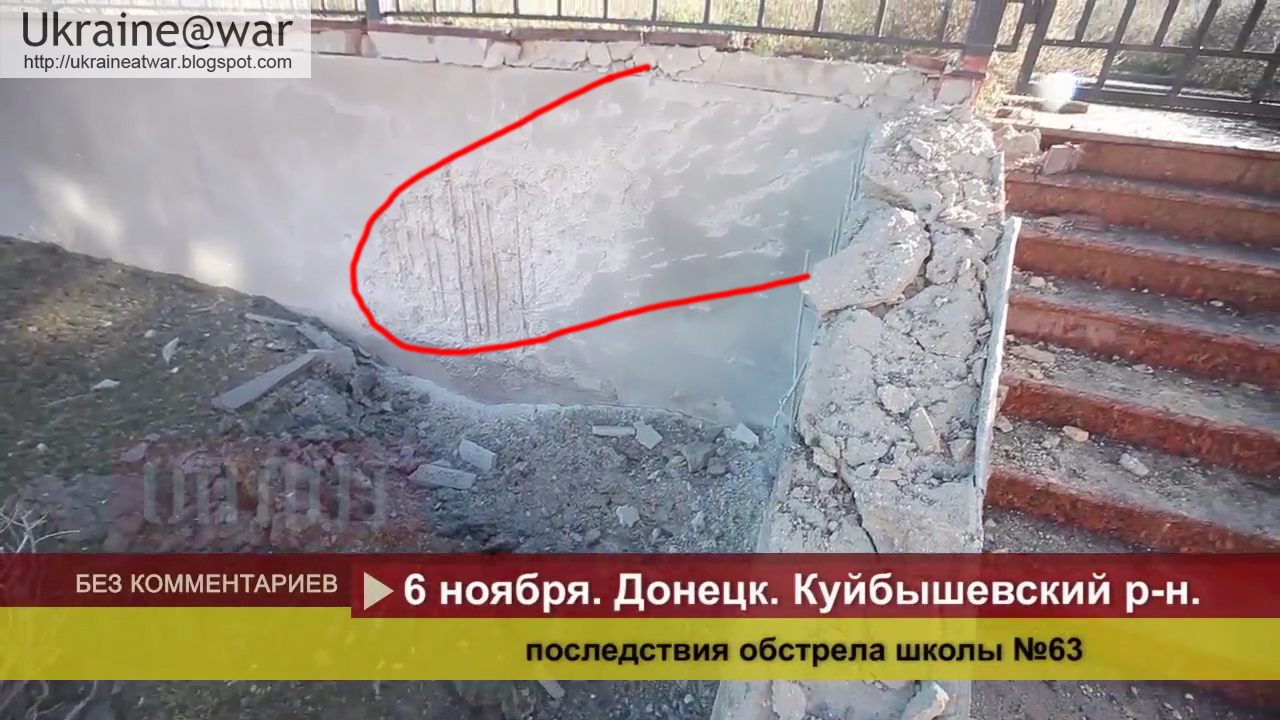 And the wall from the stairs has a broad damage line at 45 degrees: 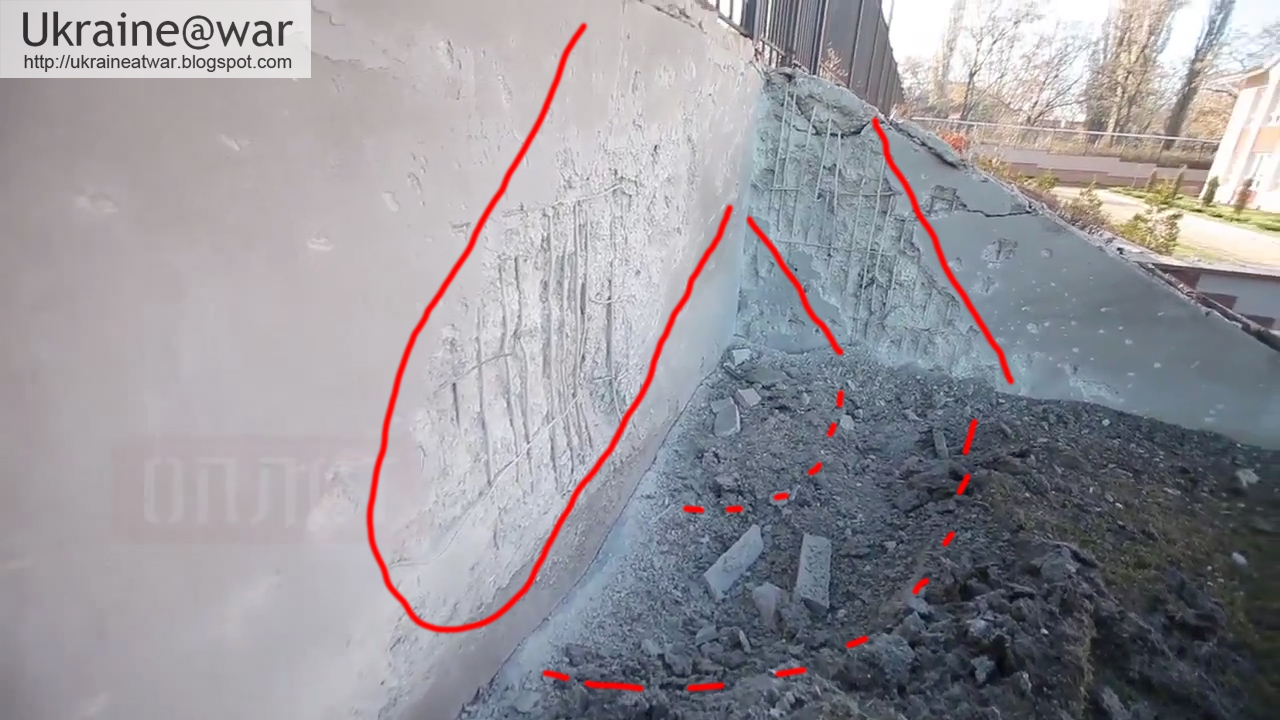 And when you have a good look at the ground, it is not one big hole, but more like a slot connected with the damage on the stair-wall.

As such it looks like something exploded against the wall and the shrapnel reflected by the wall hit the ground and the stair-wall.
But how could a mortar shell hit the wall and get detonated like that? The ignition is in its tip, that needs to hit something.
And how can such an UPWARD facing blast-pattern have been created by a shell that comes DOWN with high speed hitting the wall? One would expect the blast to face more downward?

So the question rises: could something have been shot UPWARDS hitting the wall?

The third screenshot above shows that this area is ELEVATED. The stair goes further down indeed. It means somebody COULD have been standing at a lower level, aiming at the wall that is higher and thus aiming upwards.
This COULD have been a grenade from a grenade-launcher attached to a rifle for instance: 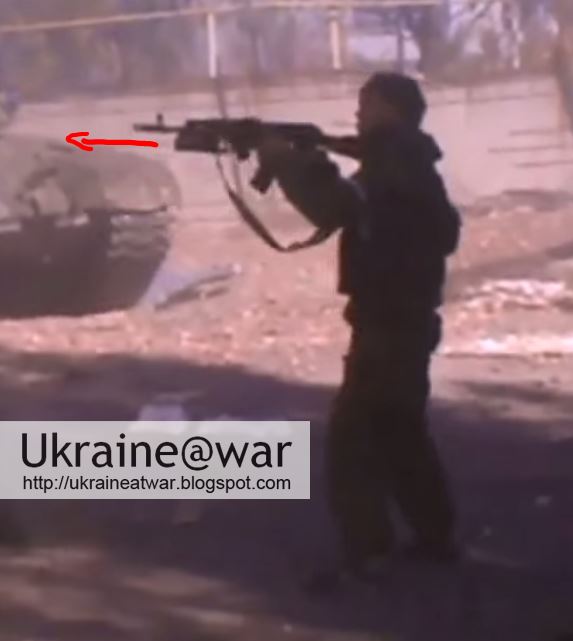 This Panoramio photo shows how it could have been fired: 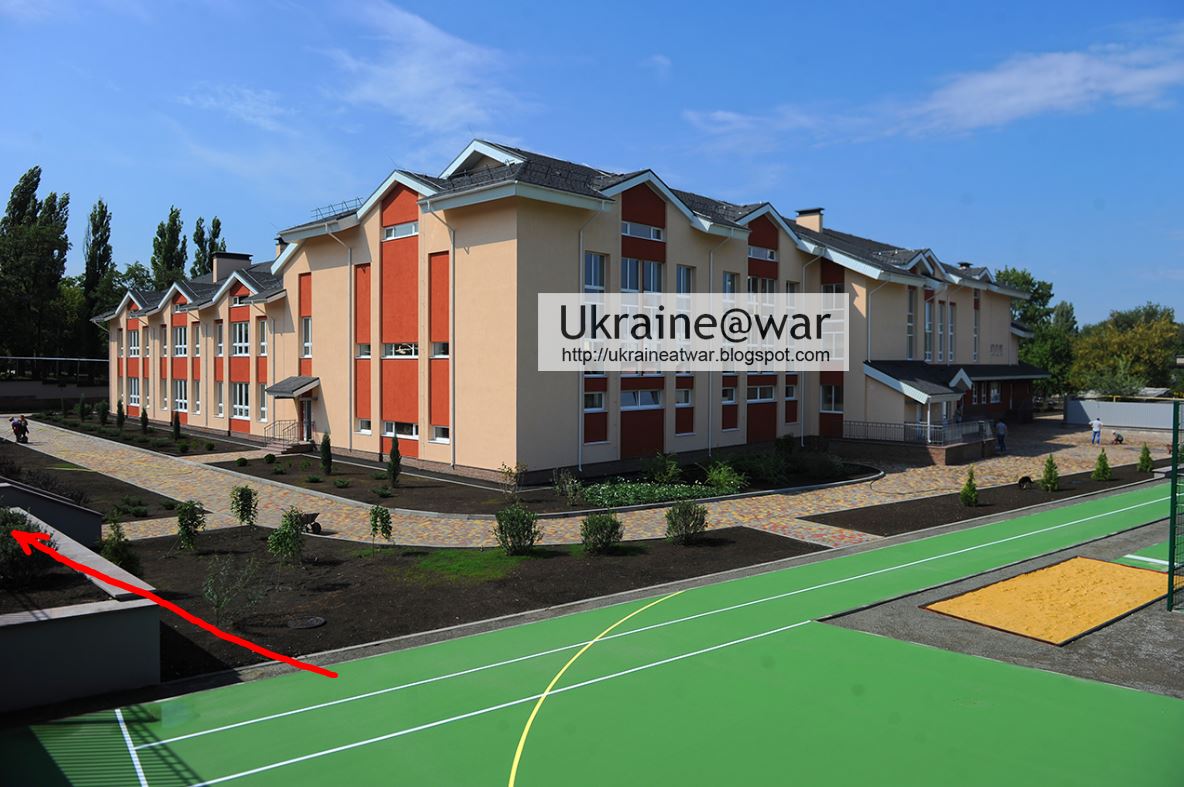 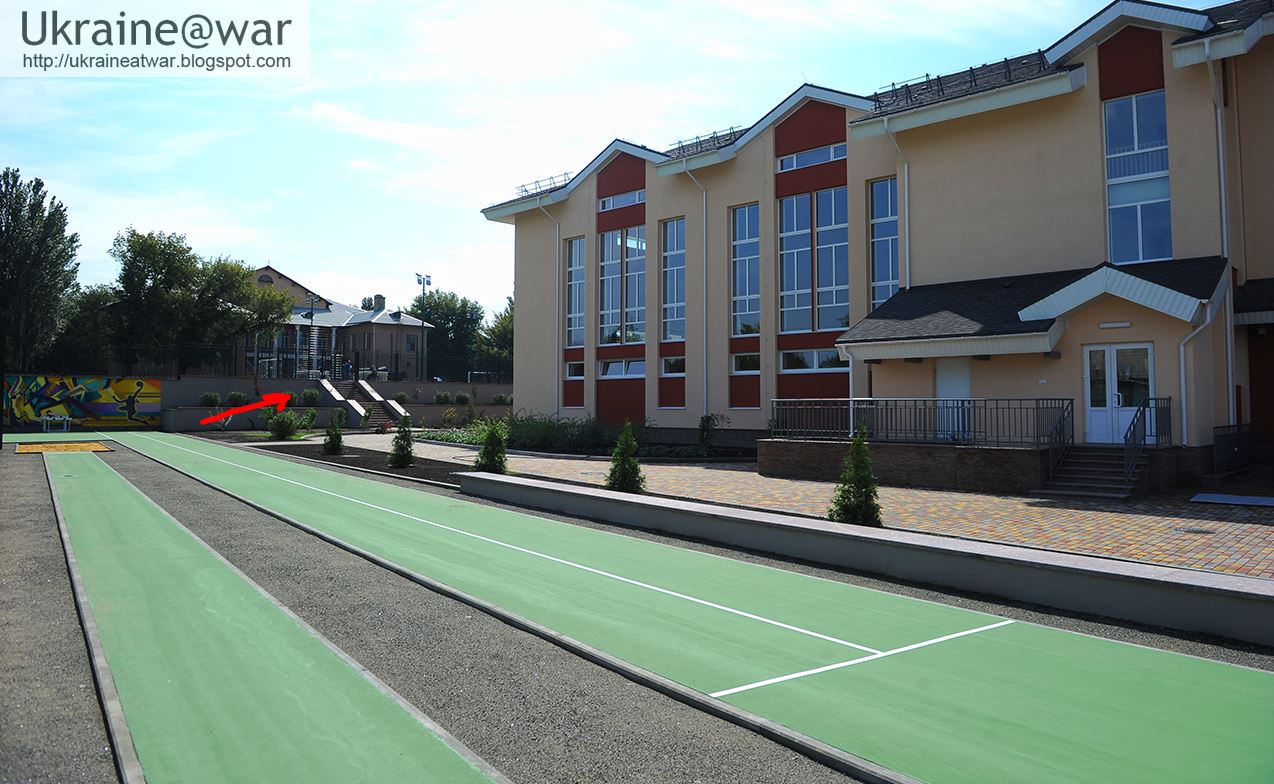 Maybe this gives the upward pattern? And the shrapnel deflected by the wall would create the other damage...

But to be sure, we would need some INDEPENDENT OSCE monitors to assess the location, make high res PHOTOGRAPHS, take samples and determine what fragments are there and what caused this.

Remember how they wrote that they had examined TEN craters of which FOUR were created by 122 mm mortar shells and TWO by 122mm artillery rounds? So it means they were not able to determine the other 4... Maybe some were created by something else? Maybe this one was a grenade?
Why is OSCE not A LOT more specific?

If this was caused by a grenade, when would this have been done?
The point is that this video has been uploaded on November 6th. This is AFTER I published my initial report which has been ALL OVER the Ukrainian media. OSCE visited the site at november 6th and 7th. None of the earlier videos show this impact. The video specifically starts with this impact and then also shows the first one to establish the relation with that.
The building shows some damage which IS visible on the first video, but these smashed windows may also have been caused by the explosion at the football field.

So what I suggest here is that it IS a possibility that needs to be considered, that the FSB caused this damage AFTER the incident and AFTER my publication and to mislead the OSCE...

SECOND:
But... if we suppose that it WAS a shell that hit the ground, from what direction could it have come?

I want to suggest that a shell coming from 'high-angle fire' as OSCE says, might have come slightly ACROSS the fence on the wall an still hit next to the wall. Like this: 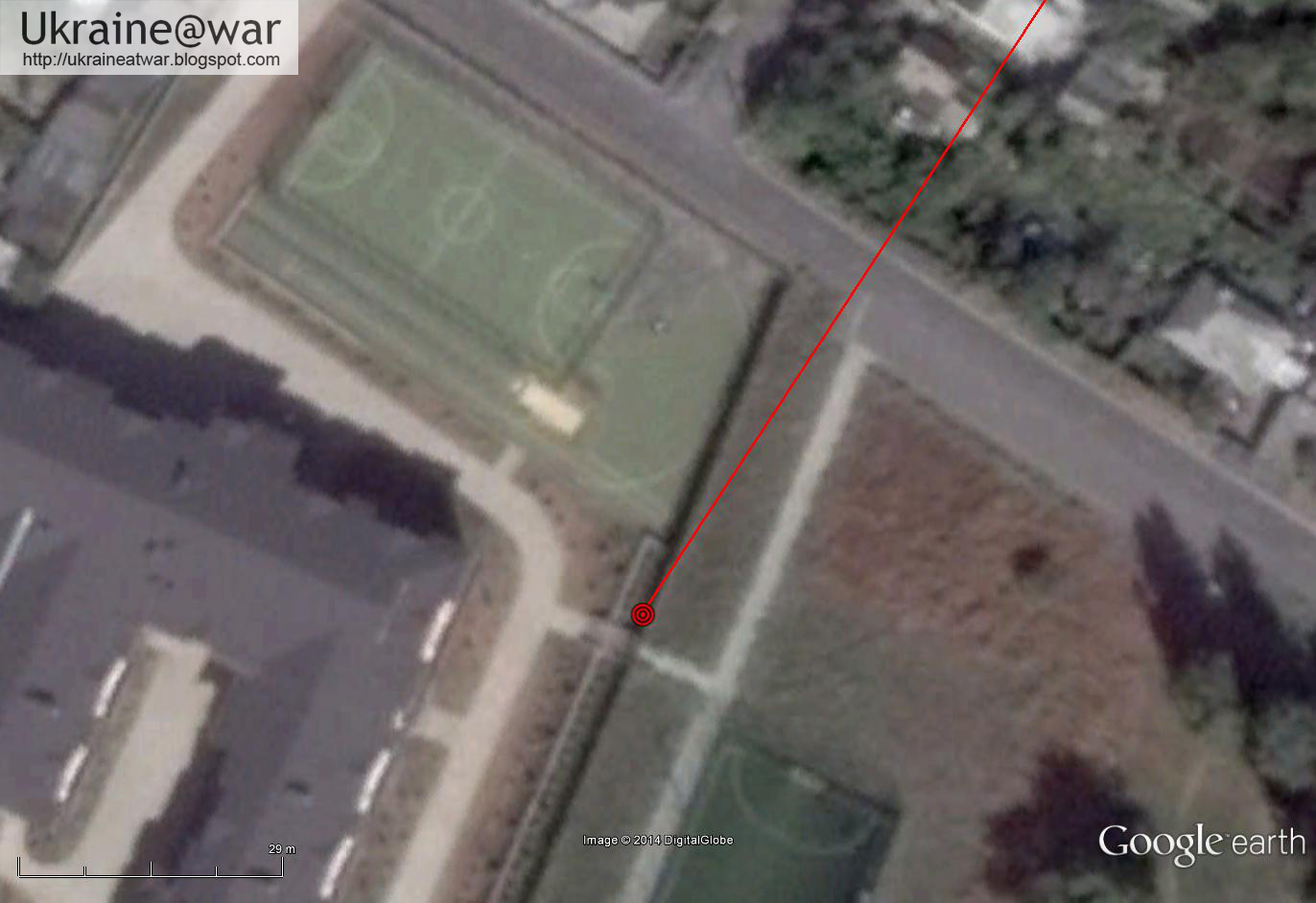 But even if we don't want this and want to draw the line straight alongside the wall, then these lines would look like this on a larger scale: 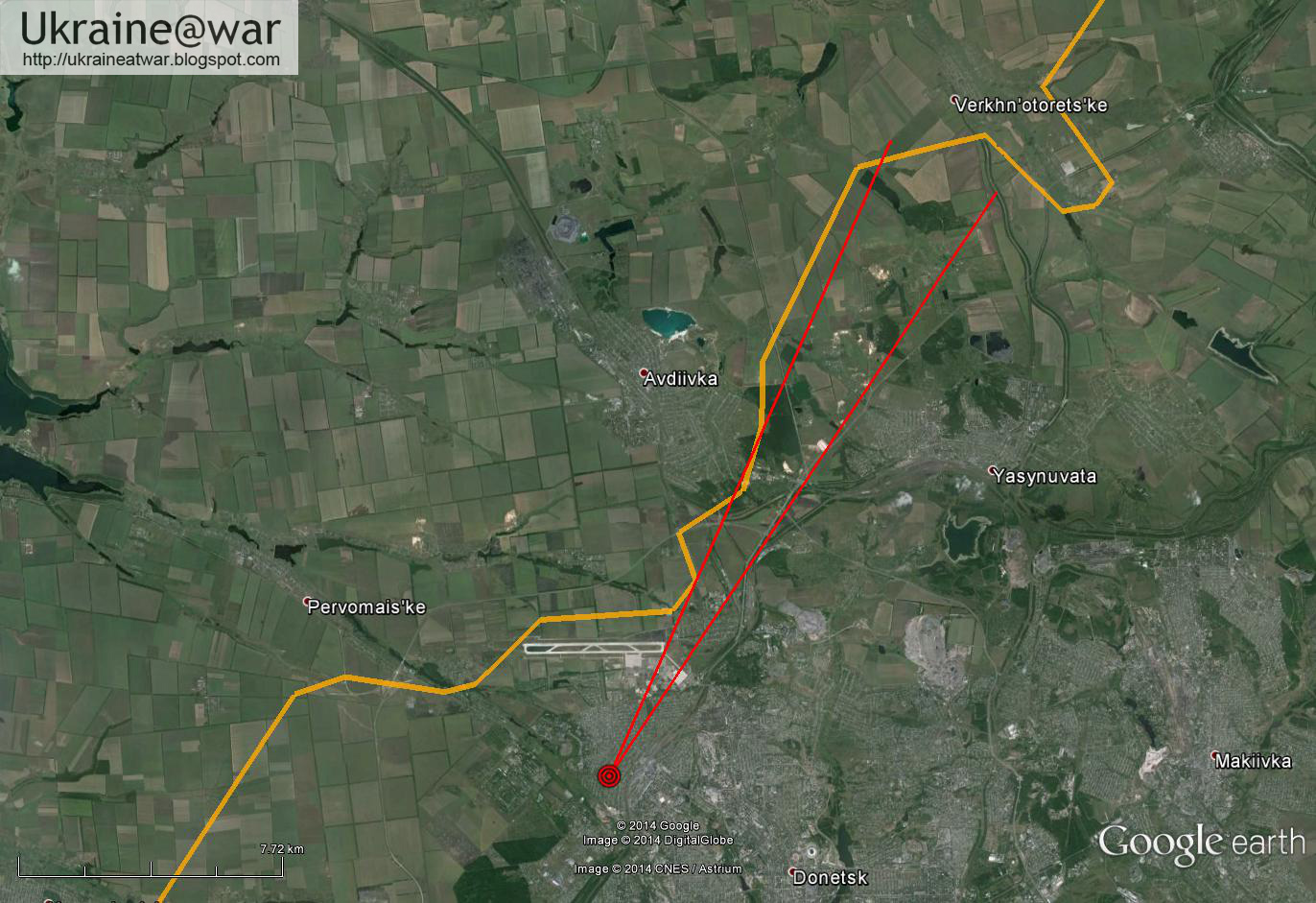 Yes, most of that territory is in Ukrainian control. But not all. It means the shell COULD have been fired from Russian controlled area. Yes, that is close to the frontline. But if they can fire a shell TOWARDS the Ukrainian army from the front line, then they can fire it into Donetsk as well from there.

For instance, this railway behind an old mine surrounded by trees is a perfect spot to fire one or more shells into Donetsk: 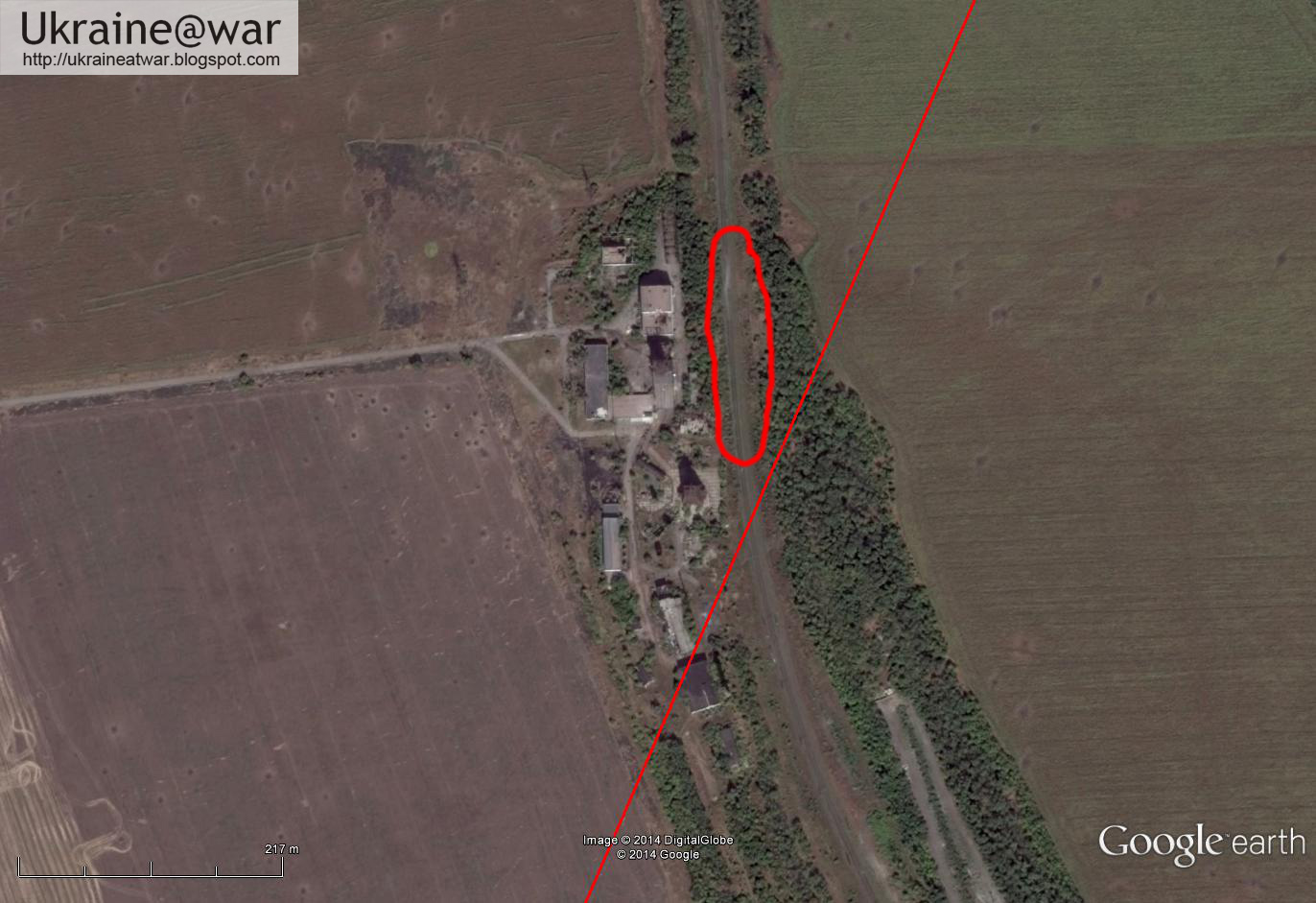 Or this spot at the border of a forest, hidden by the trees, or the other one behind the tree line: 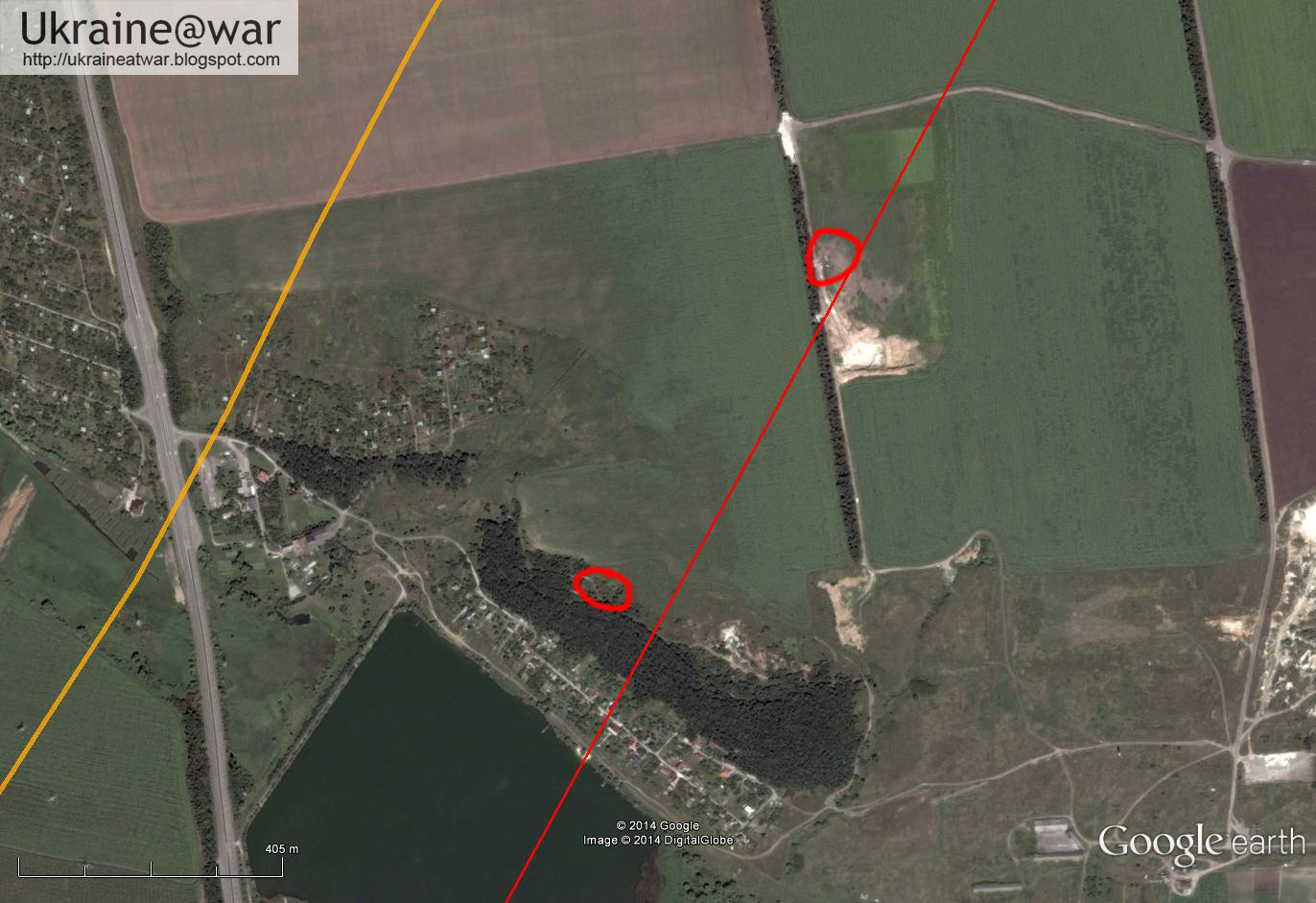 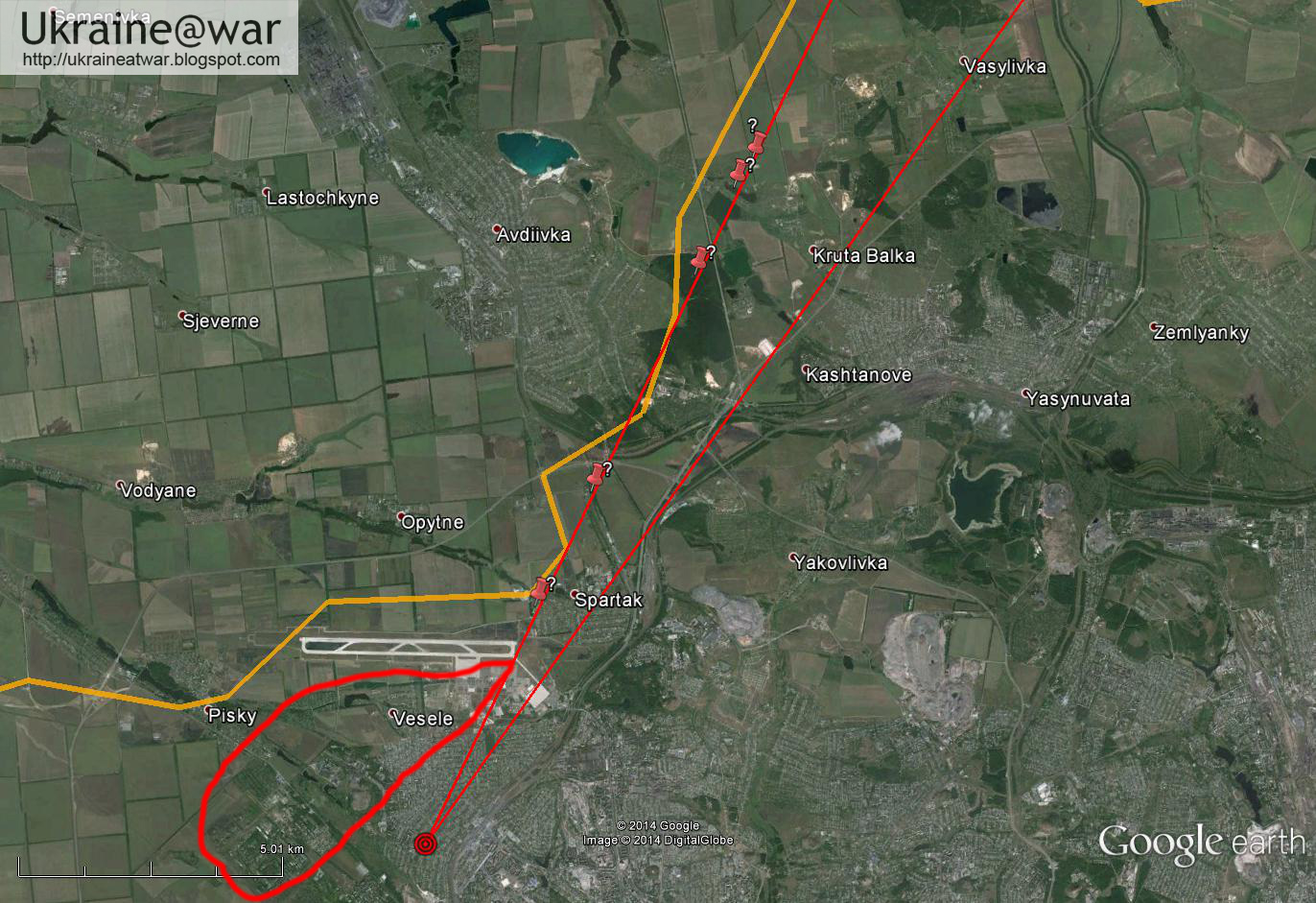 BUT... they can fire from the airport too, or from the VOSTOK trenches just before Pisky, which is NW from the school... (red encircled area).

The point is this: OSCE says as well 120 mm mortar shells were fired as 122 artillery rounds...

What does that mean? It means it has been a COORDINATED attack with several 'sources' involved. And they all fire INTO THE SAME AREA... That means this area has been CHOOSEN, PREDETERMINED. Different ordinances had to be set up, aimed, and fired almost simultaneously (within a period of a couple of minutes).

It was NOT a random attack!

Conclusion
There is not a small possibility that this 'new' impact is a setup, created after the incident. But even if it is not, there is NO proof at all this shot was fired by the Ukrainian army. Not even if it DID come from the NorthWest. Since it was a deliberate, coordinated attack with multiple ordinances involved it must have been fired by ONE side only. Since the other shell clearly came from Russian side, this one is fired by them too.