Ukrainian POW witnessed execution of his friends at Krasnyi Partizan

(This blog is a translation of this article) 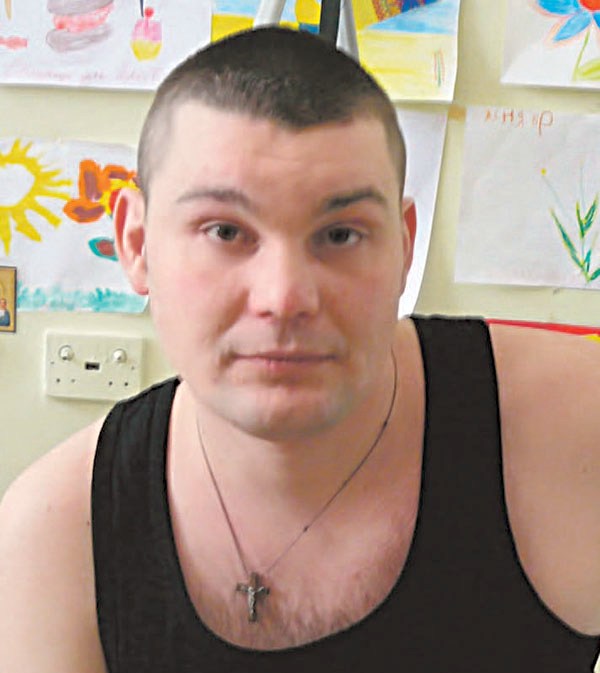 Tied-up, the half-dead Cyborg is kneeling at the barrel of an assault rifle. "Look, ”Dill”, look up ..." – the enemy’s voice accompanies a powerful blow in the back. In front of his eyes the Ukrainian soldier sees his friends - those who have long been his brothers and whose lives are about to be interrupted - 0ne shot, two, three ... blood ... The end ...
A terrible unreal scene of our soldiers being shot, the hellish scenery of war, all is still in front of Cyborg Dubrava’s eyes. Almost every night he sees that scene again and again in his nightmare ...

August 26… Vitaly Dibrov was invited to the Army Recruitment office in Dnipropetrovsk. In his civic life he is a guard, a beloved husband and father. With tears in her eyes Vitaly’s wife escorts him to the war and two-year daughter says: "Dad, come back soon, I'll wait for you ..."
In a few days he will be in a real hell. Fifty-four days of fighting in Donetsk airport. There was no respite there. Constant attacks, death of friends, it seemed that the universe was being destroyed. Psychological, physical and mental exhaustion was felt more and more. Not everyone is able to stand such pressure.

Once he unwittingly became a witness of his ‘hell shop’ friends’ conversation: “If we had not formed a friendship the Ukrainian Army would have already collapsed. We are kind and friendly people and we have to cling together”. Lately he has been recalling those words a number of times.
January 22 in the village of Krasny Partizan twenty of our soldiers are holding two posts. At about nine o'clock the first shot are heard. In a moment the bullets of "saushok" and multiple rocket launcher systems of the Russian terrorists are trying to wipe out Ukrainian soldiers as well as civilians from the land of Ukraine.
Our guys stubbornly hold their positions. The first, second, and third volley... the enemy’s shooting back is even more ferocious. The forces are unequal. Ten meters from Vitaly a shell brakes. Shot by a tank .. fire, dust, darkness in front of his eyes and terrible pain ... by shock wave his crippled body is thrown away in a hole ...

Consciousness returned to him only after a few days. Contusion, crippled hand ... swollen, cold as ice feet. "Thank God, the phone works" - the guy thought. Vitaly was moving towards his friends according to SMS - adjusting. The fighter will probably never forget that difficult way back. Passing minefields, overcoming terrible pain, going through the darkness of a frosty January night, on bent legs, with a small flashlight he lighted up his path. Suddenly he saw a house with the thrilling light of a candle in the window. Looking into the window, Vitaly saw an old man, who was looking at the icon and silently cried. Somewhere nearby he could hear voices of an enemy patrol. He knew that his entering the house can be too risky for the old man. As it is known, terrorists do not spare those who hide so-called “Banderovets” or a “slaves-owner”, So he decided not to stop but keep on walking. He went to the road.

“Just not to be noticed" - flashed in his head. And suddenly: “Stay still! I told you! - Shaken up shots of the four automatic guns, - Weapons on the ground! Quickly! Next shot for you!”

January 28. Captivity. A cage of 2 by 2 square meters. In a bowl there is barley porridge, in a glass there is drawn water ... A pool of blood on the floor ... Interrogation, torture, beatings. Almost every day he was taken to be shot, twisted arms and legs. Information was literally knocked by telling the following words: “"Gunner, you must pass the card to us ..." He got back with a smile and half dead silence.

Then according to the daily schedule was watching movies. Not just movies but special, psychological ones. Two to three times a day that violent video was broadcasted by local militants to form their rage and hatred towards Ukrainians. Fantastic abomination of a number of anti-Ukrainian dirty surrealism about raping women, eating children destroys their brain every day. Performances of terrible morbid fantasy seemed even worse than raving madman. He has never seen such dirt... in his mind involuntarily flashed: "Of course, this is where rage to all Ukrainians come from. I feel sorry for you. Are you sick people and you have nothing sacred ... "


February 5. On behalf of "DNR" jeep with a siren, bus, eight cars, each with one captive and two militant guards. “Get Up! We are leaving you alive for your courage and fortitude. " Shaking hands, pulsating thoughts ... But the main thing is that he is returning home as his daughter begged him to do when he went to the war…

Also see: another translated POW witness account by Interpretermag.
Also see: the original blog about the execution of Ukrainian POWs south of Krasnyi Partizan
Posted by Ukraine@war at 2:47 AM