Daniel McAdams (@DanielLMcAdams) of the 'Ron Paul Institute for Peace and Prosperity' is profiling himself on Twitter and it turns out he has a profound proRussian attitude that looks exactly like those of Russian Trolls.

On the website of the Ron Paul Institute, Daniel McAdams features as the executive Director: 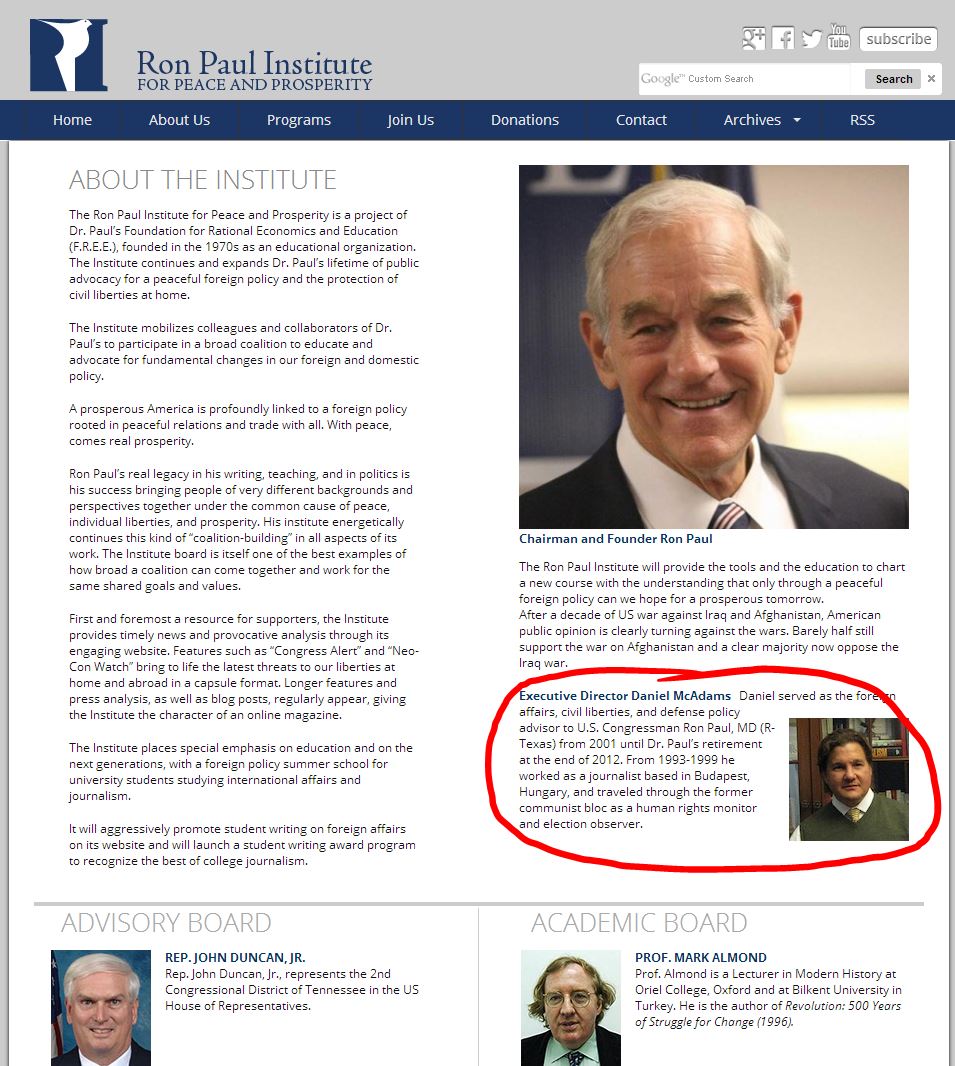 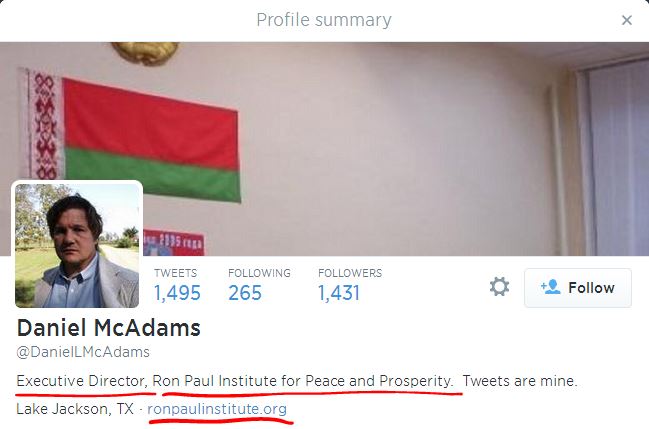 It seems to be the Daniel McAdams of the Ron Paul Institute. 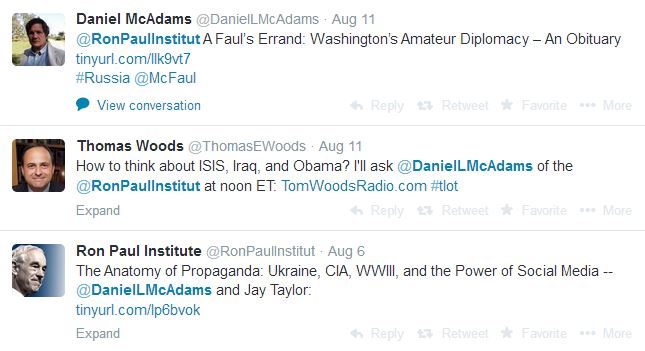 This clearly connects these accounts and it means @DanielLMcAdams is not a fake account impersonating the real McAdams, but it is indeed the executive director of the institute.

Daniel McAdams can be found as an author on the Russia Today website: 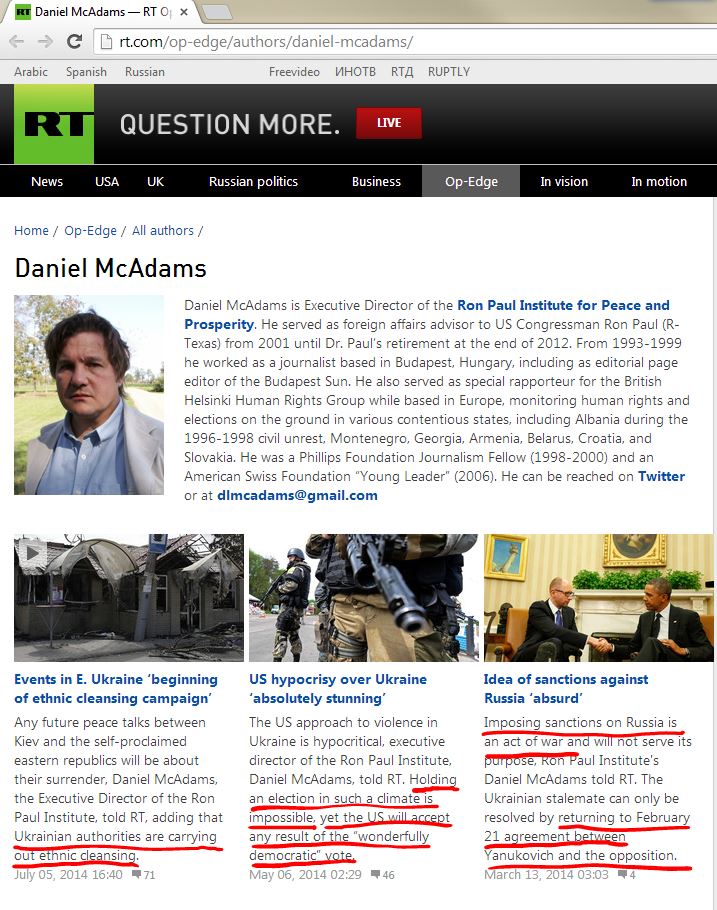 The first three articles in which he is featuring, already blow his cover: he operates as an extension of Russian Propaganda.
These are some things he says:


McAdams came to my attention because of his extremely rude remarks towards a Ukrainian citizen reporting live from Novoazovsk while it was being shelled, under attack and being taken over by Russian forces: 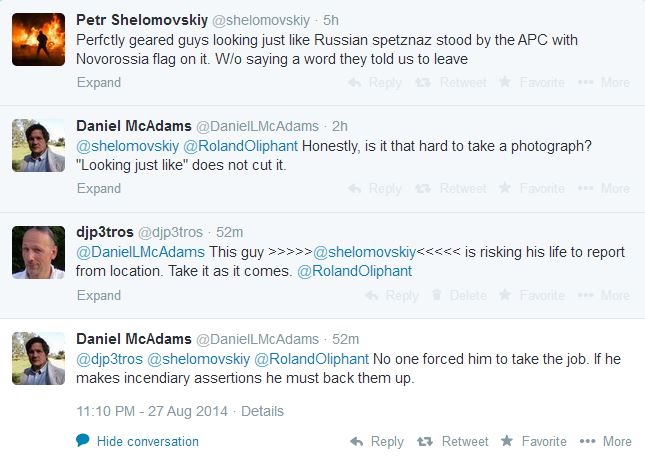 I jumped in to his defense, but no mercy for him... which is ridiculous in such circumstances. This made McAdams a suspect to me.

So I looked at some of his tweets and found things like this:

Besides being straight out rude here, he defends the Russian Propaganda theme: all shelling is on Ukraine to blame. So I send him the link: http://ukraineatwar.blogspot.nl/2014/08/russians-shelling-cities-and-villages.html

Some  typical retweets from Russian Trolls: 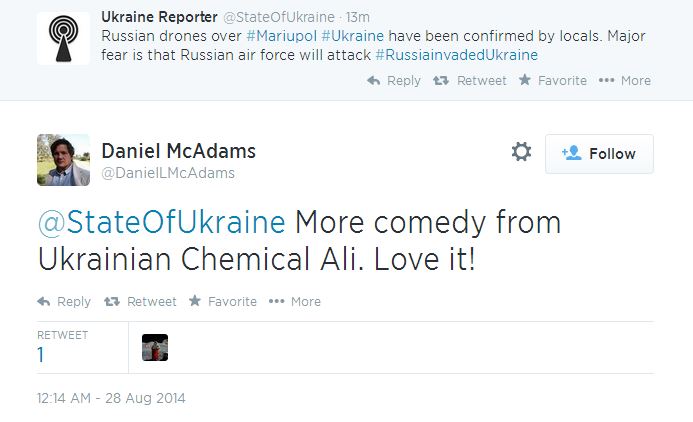 He even takes on Carl Bildt in a rude way, who is the foreign minister of Sweden and who really supports Ukraine:

Ok, seen enough of this guy...

Conclusion
Daniel McAdams, the executive director of the Ron Paul Institute is a Russian Propagandist. Very likely he must be paid, bribed or who knows what to do this kind of thing.
My advice: ignore him and block him.

Whether the Ron Paul Institute itself is a cover up for Russian Propaganda or whether they happen to have the wrong director is something I did not bother to investigate yet. Yet they clearly seem to have a US-criticizing attitude.