Evidence of POW torture and trying to blame Ukraine for it.

This video tries to show how Ukrainians capture and treat their POWs: 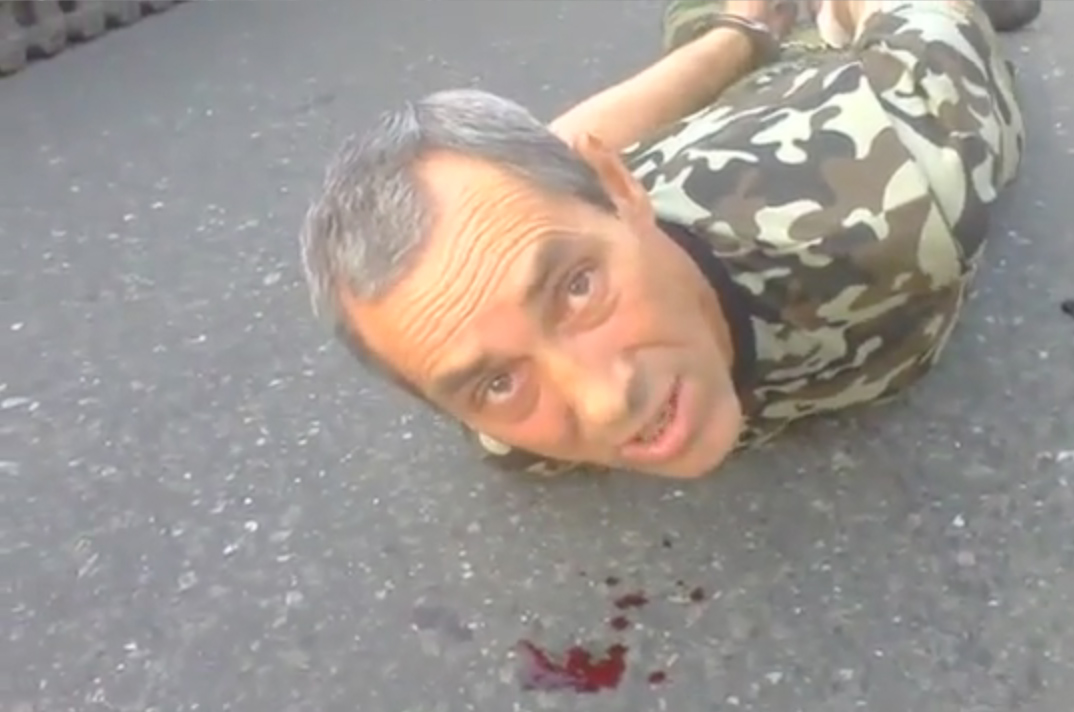 can also be seen in this video (taken earlier) about Ukrainian 72th airborne troops being crushed by shelling from Russian territory: 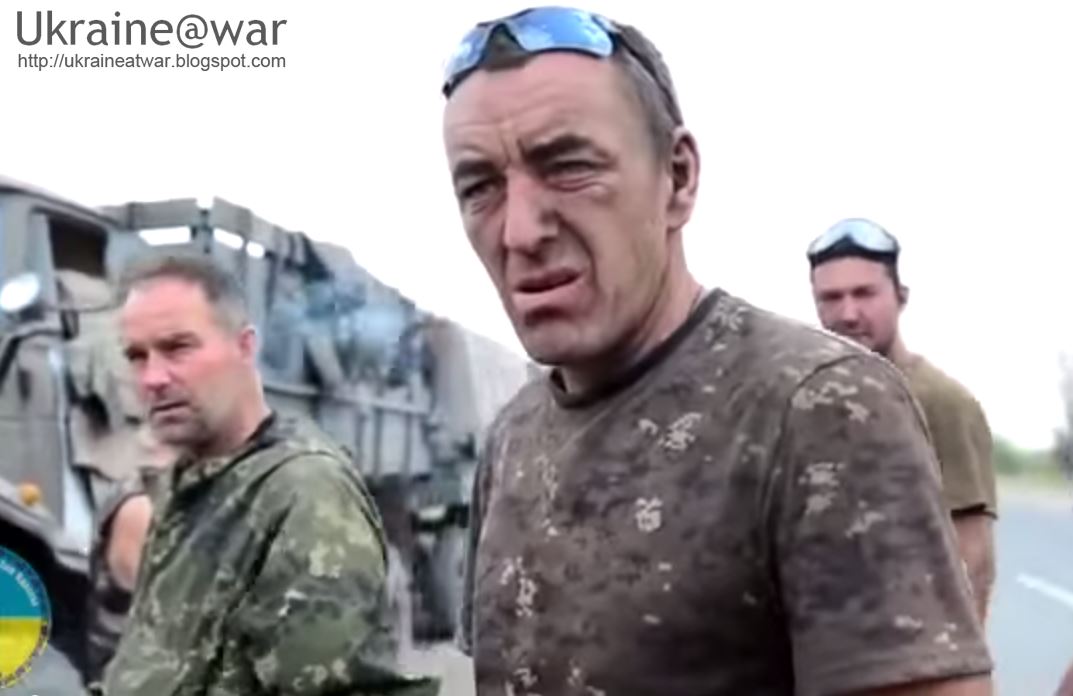 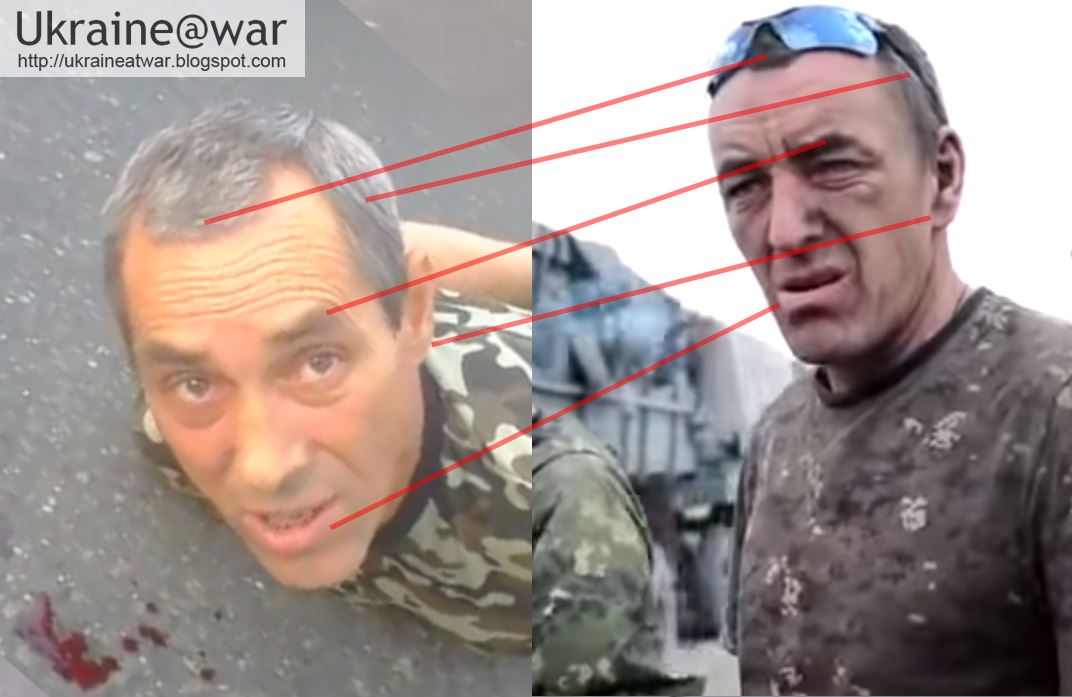 Understand that in the second video the man just came back from weeks of intense shelling. He is exhausted, dirty, underfed and anger and frustration are written on his face.
In the second video he must have recently returned to the battlefield. He has slept well, eaten well and is physically fit again.

Next thing is that the facial expressions are very different. Look at this example taken from internet: 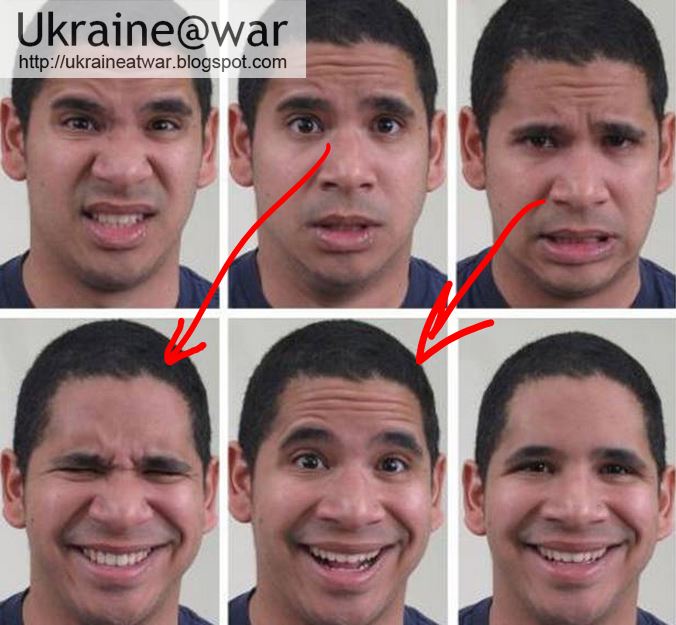 Frowning down (left arrow) or frowning up (right arrow) explains the different wrinkles on the mans face.

But even then his wrinkles can be matched: 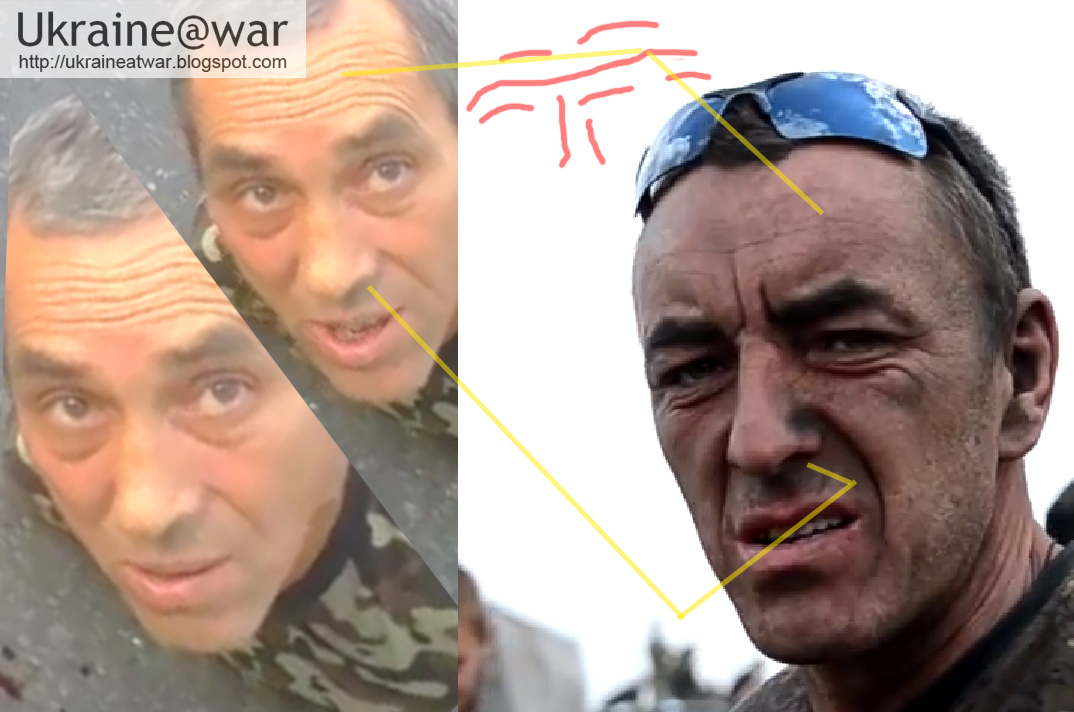 In the image above the nose can also be compared well. See how his nostril has the same curve.

His teeth are very similar: 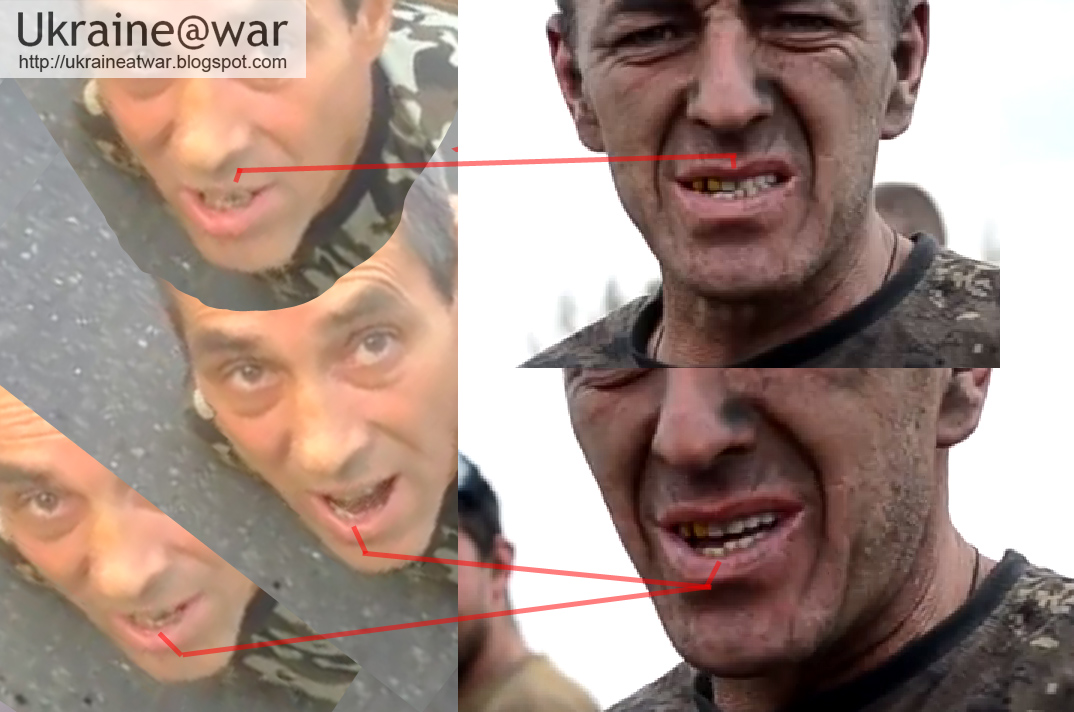 Look here for his hairline: 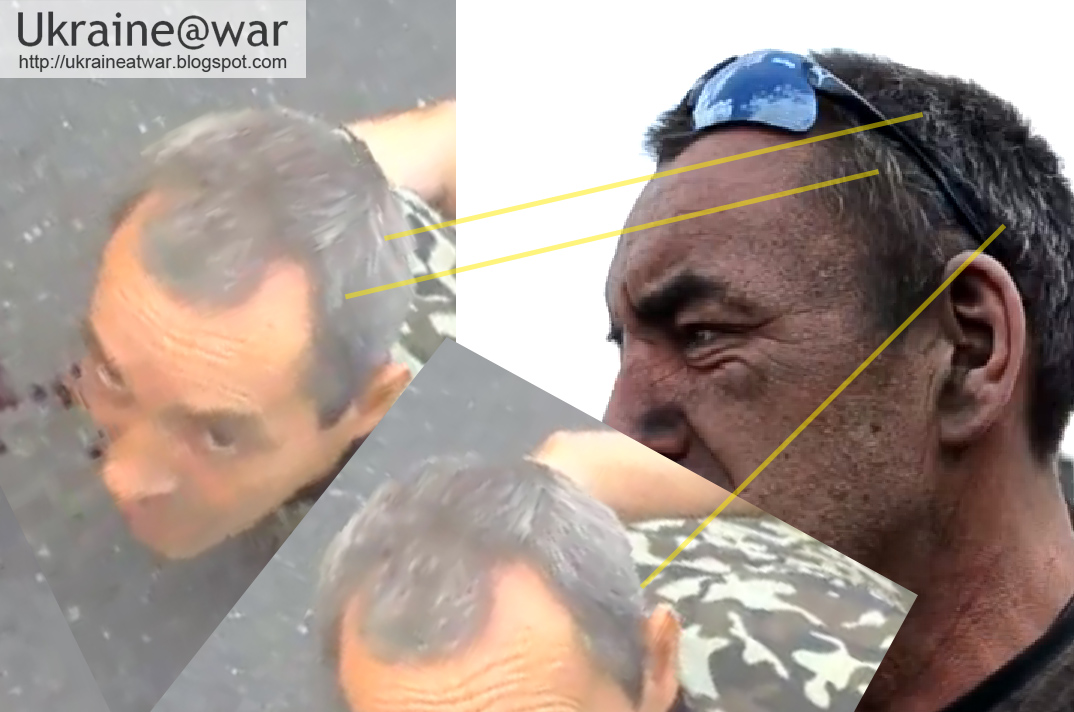 Even some of the grey of his hair can be matches... 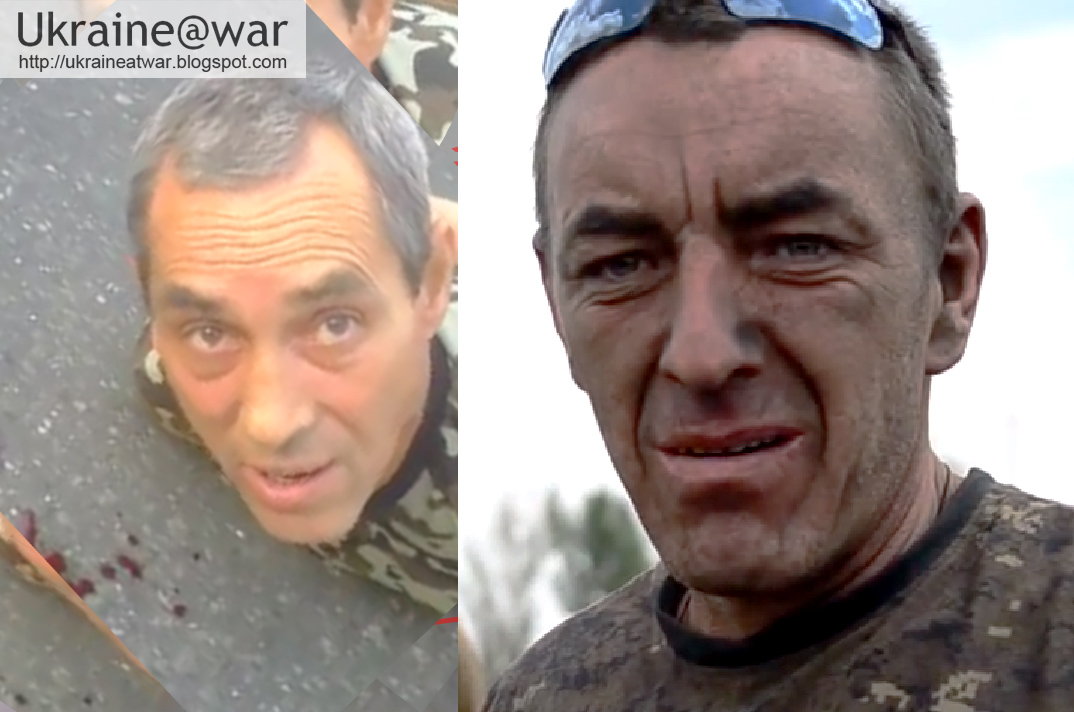 So unless this Ukrainian man has a twin-brother that serves the Russians (and the same dentist), this is the same man.

How can a soldier from 72th brigade end up in Ilovaisk where the 72th is not fighting?
The 72th got crushed near the border in the East by Russian artillery. The remnants joined the 30th brigade, which was indeed fighting near Ilovaisk. As this video explains:


A lot of people from 30th brigade are missing in action. Which means they were either killed or captured. When captured there is an extreme high risk that they get killed too.

@djp3tros @asonofasun I second that, he tried to fake Ukrainian w/o much success
— Mario (@cttmario) August 20, 2014


So, this means this POW is UKRAINIAN and not a local proRussian separatist.

To help identify him, this man has some golden teeth (not clear enough in other video): 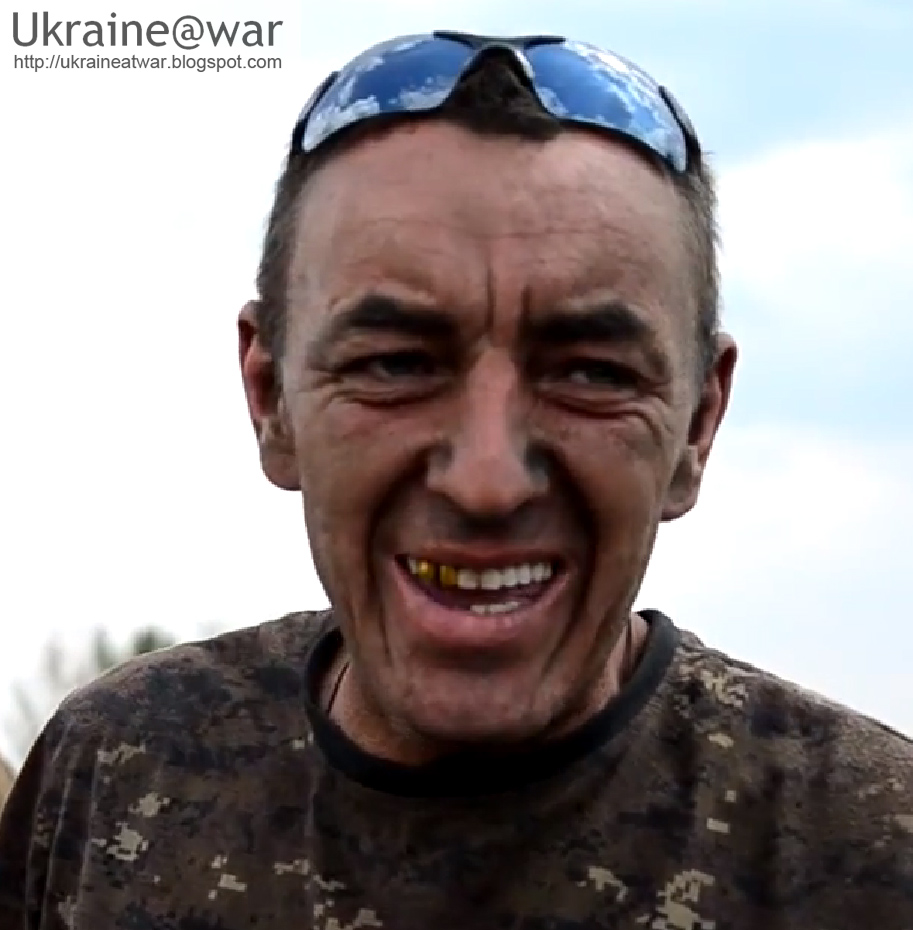 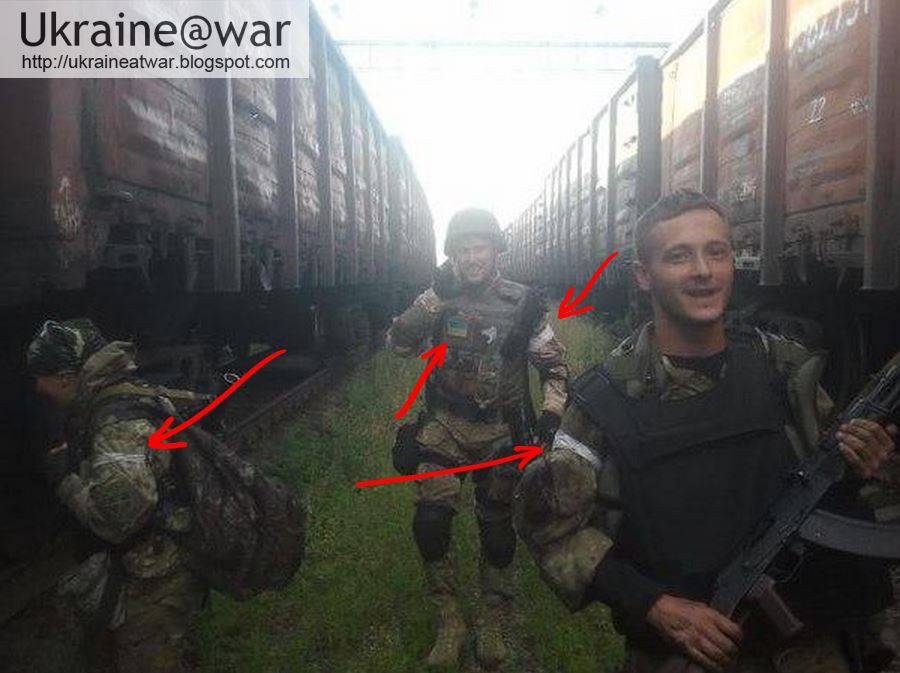 This is a screenshot from this video where Battalion Dnepr-1 enters Ilovaisk, where a Russian BMD-crew was captured: 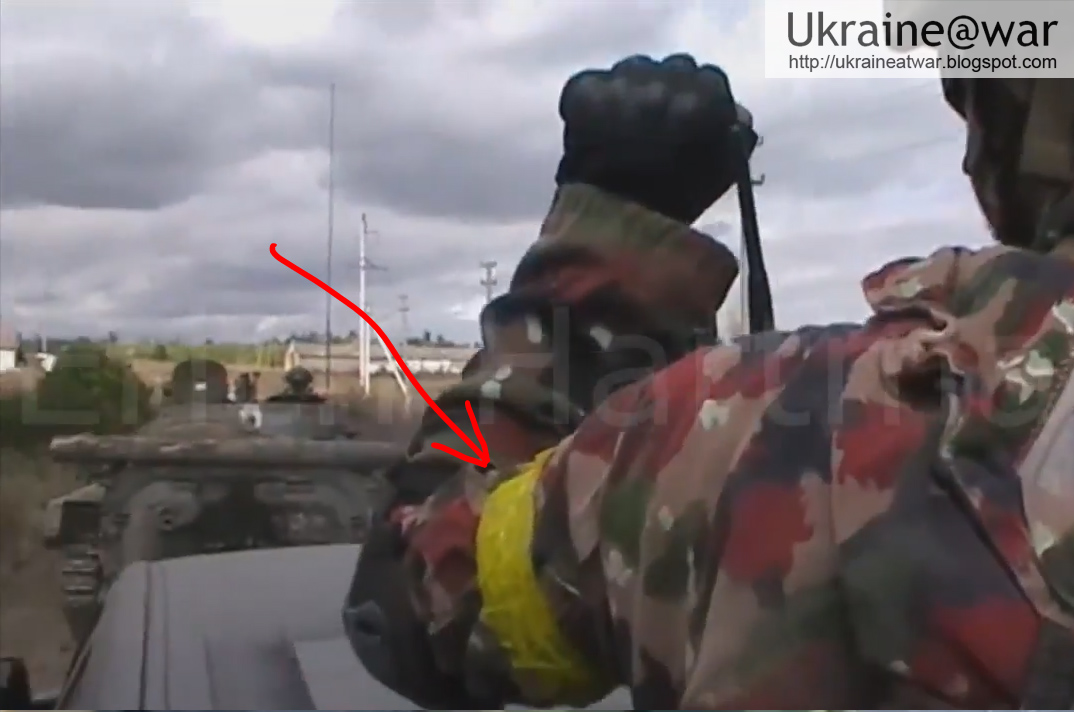 This is what the pretending-to-be Ukrainian soldier was wearing: 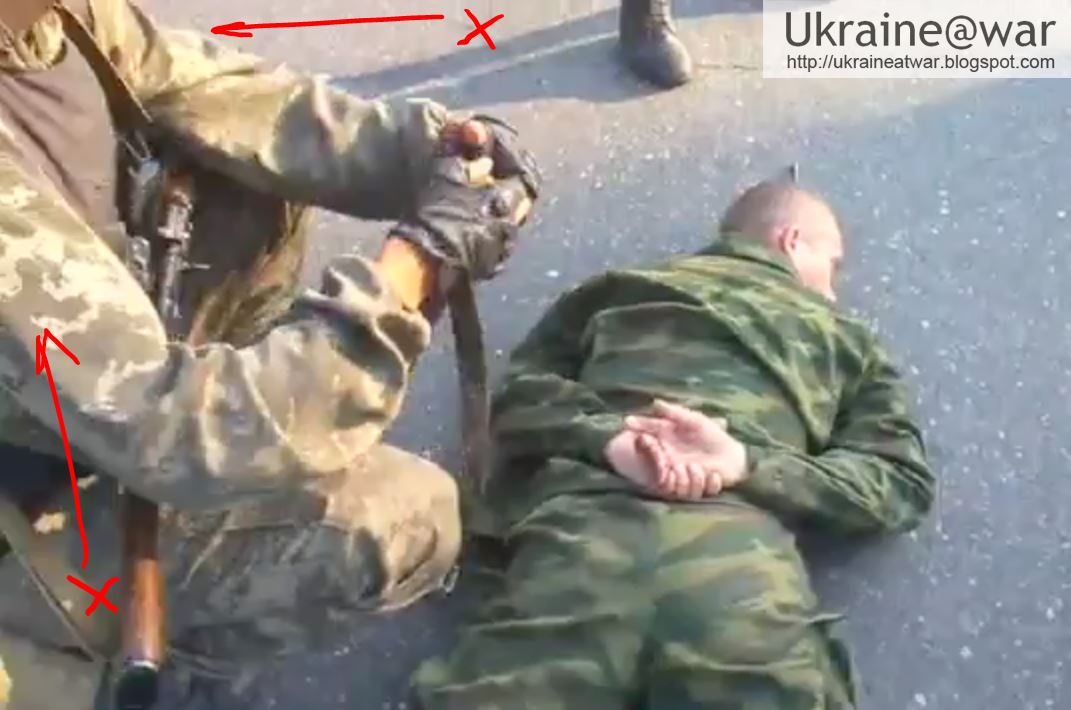 The other pretending-to-be Ukrainians lack such bands too. 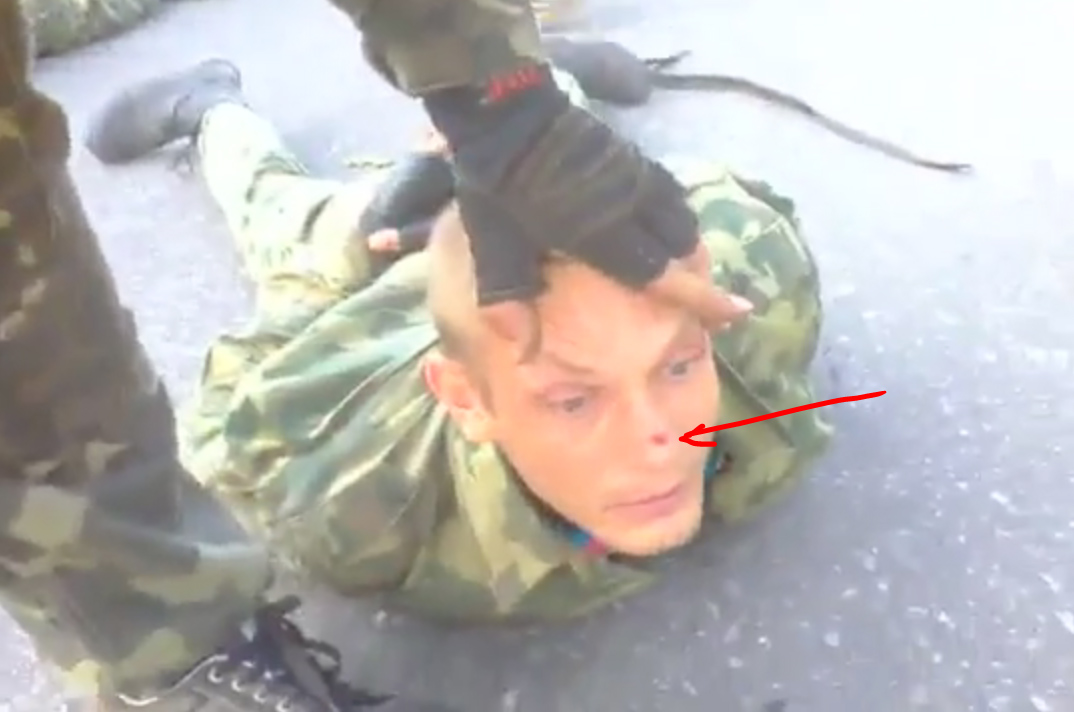 Note the scrape on his nose from forcefully pushing his face to the street. 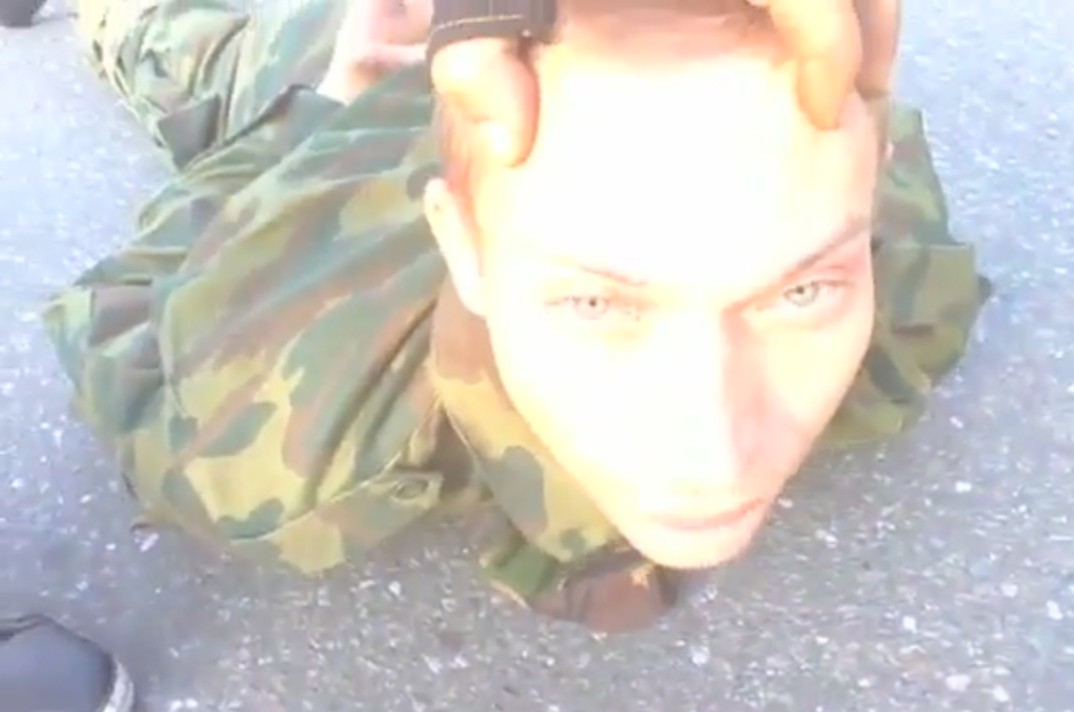 Third POW. See the fresh blood on the street: 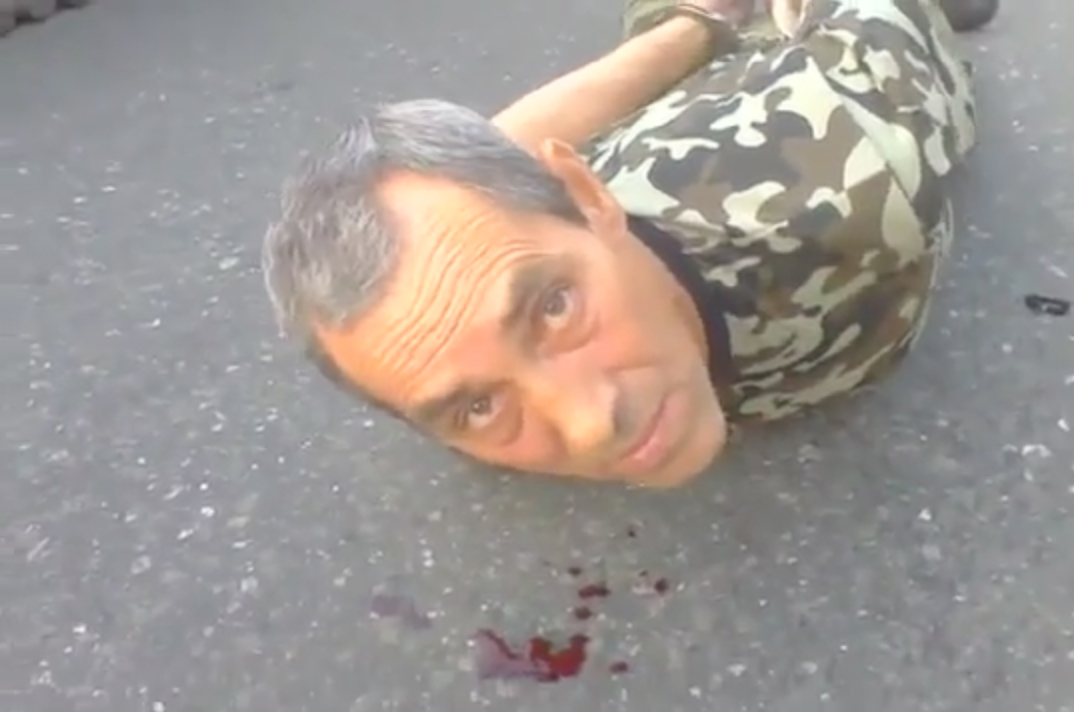 A wound on his face cannot be seen. Yet he may be hit in the face and bleeding from the nose. The left side of his face is not seen, nor the bottom of his nose.

This Novorossyia logo must either haven been pasted to his jacket, or he had been forced to put on other clothing, to look like they have been captured by Ukrainians. 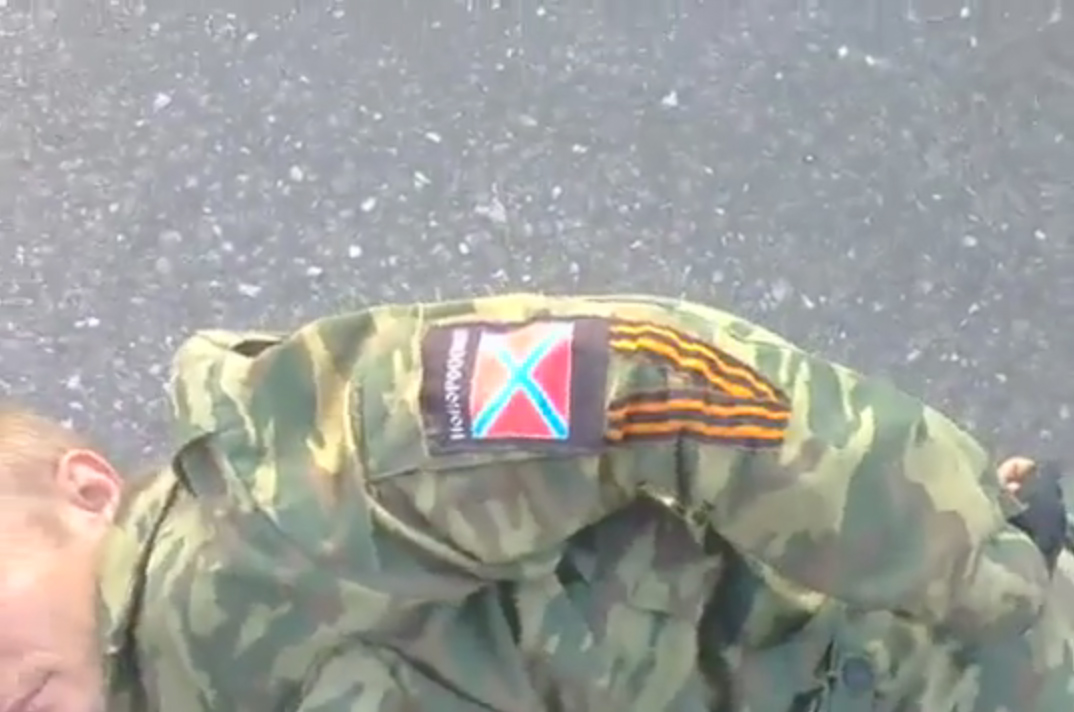 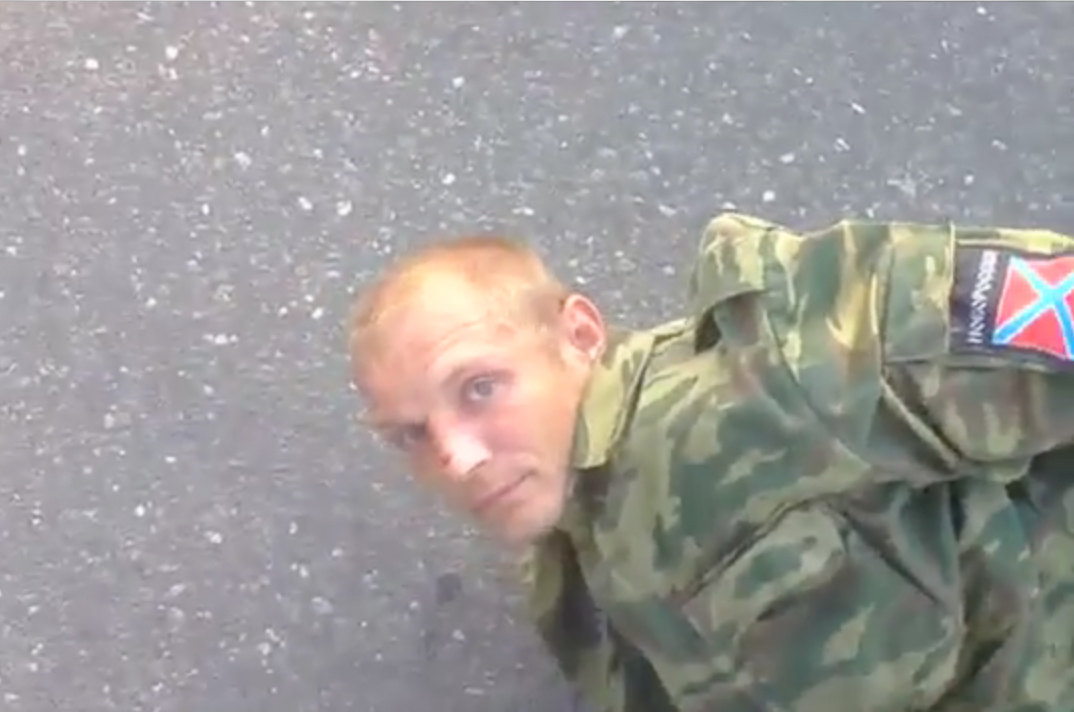 His belt lies next to him: 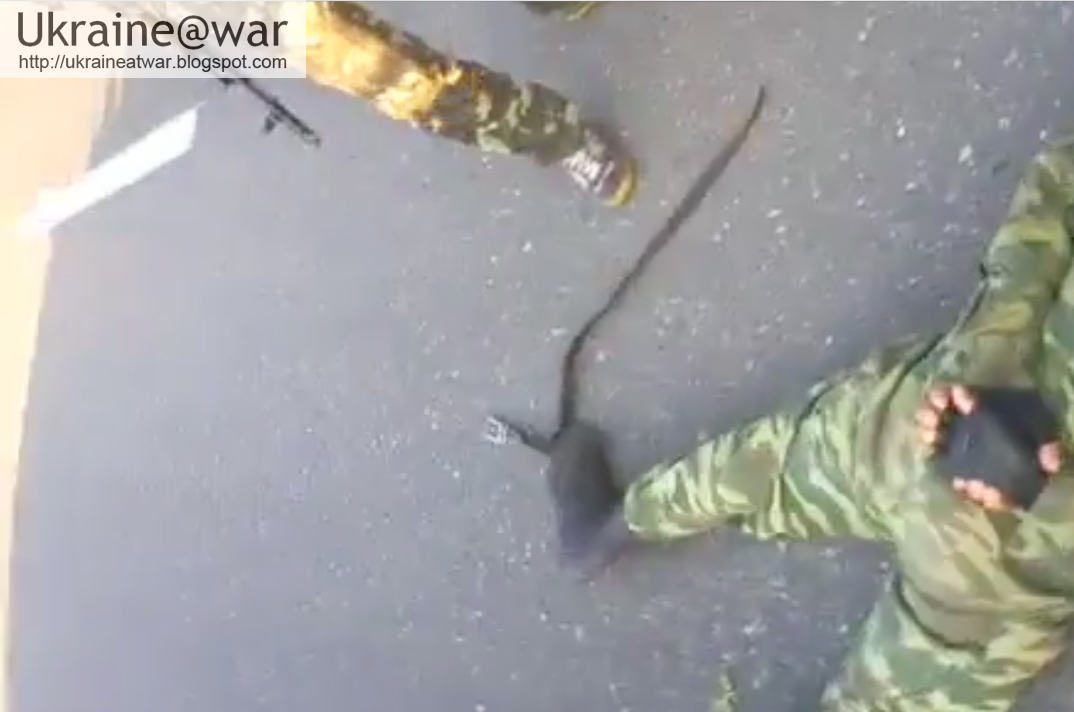 which will later be used to tie his hands. 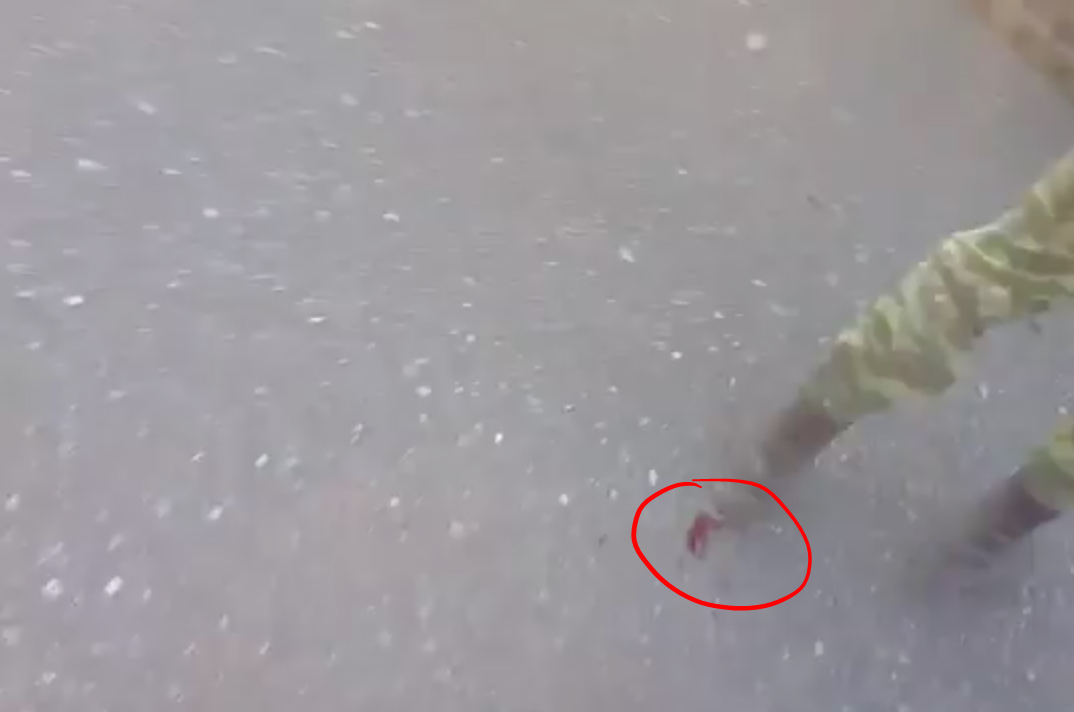 I have been told that the last thing the cameraman says, is something like: you are finished...

You can hear shots on the background. It may very well be possible that other Ukrainian soldiers are executed while recording this video. 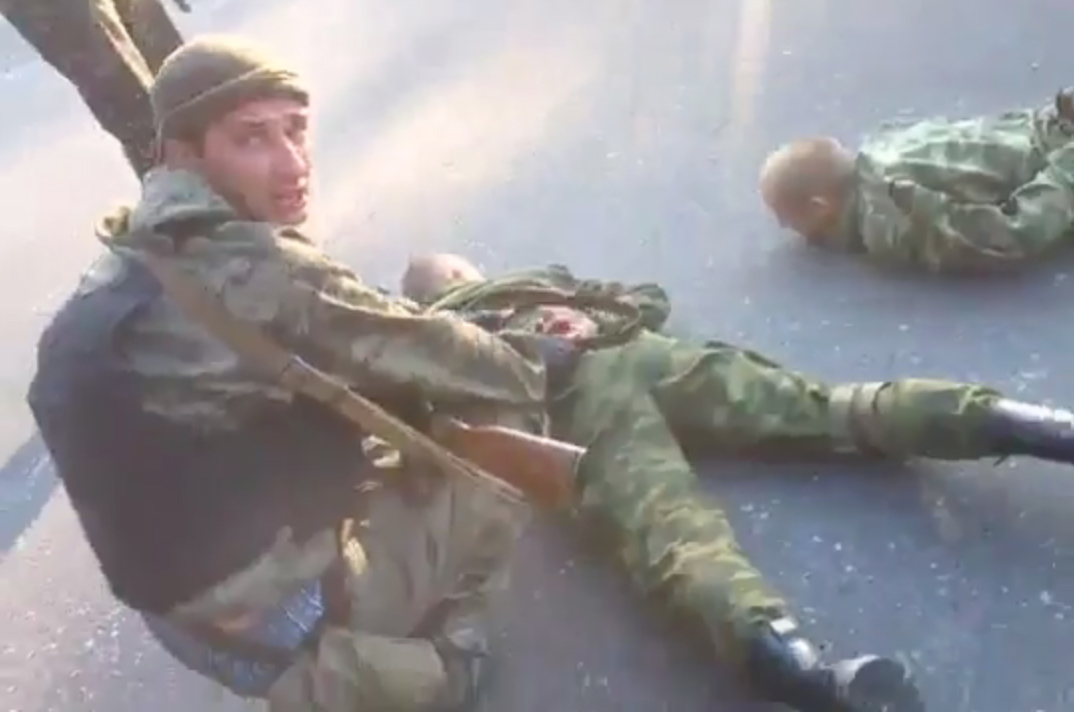 
If you recognize any of these people and have more information, please let me know as soon as possible.

Also maybe this car can be identified or seen in other videos? The number plate seems to be AH 0244 IE. 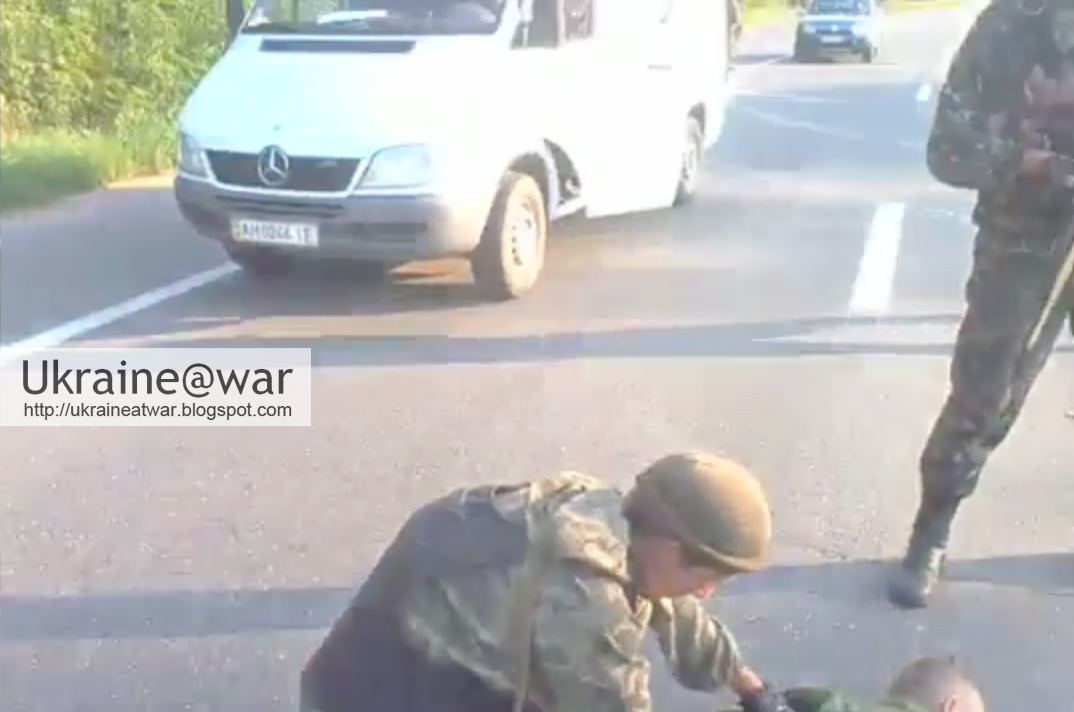 These POWs may be killed if they stay out of media attention.


Also see: How Terrorussians tried to blow up the car with Ukrainian POWs AFTER they were exchanged for Russian POWs.
Also see: GRAPHIC: Ukrainian POWS captured, tortured and likely dead by now


UPDATE 23-8
A Russian TV-station has picked up the issue to give it their own twisted turn again. They say the Ukrainians made the video, but the captured Russians were actually their own soldiers, since that one man was seen in the earlier video.
Here is the article on auto-translate, with images use from my blog: 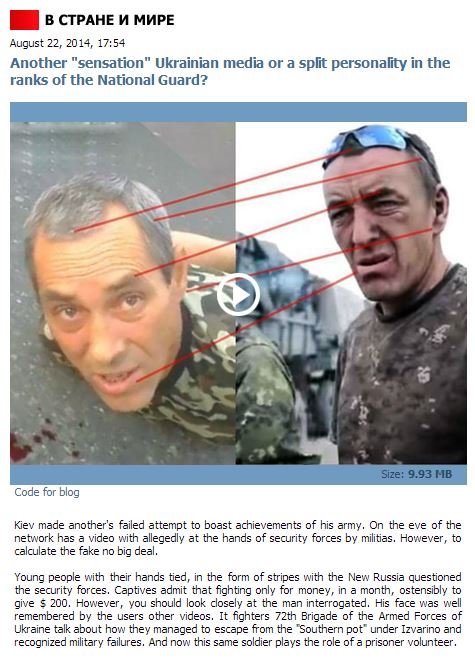 The article including their tv-item can be found here.

In response to this Stopfake.org published an article saying this is NOT the same man.
Neither site refers to my blog for people to read the whole story.

Still we haven't heard anything of the true identity of any of the POWs or the soldier from 72th.

So I still say it is a staged video from Russians with real Ukrainian POWs who may be or get killed. Unless proven wrong...