The mistakes I made in my first assessment of the flight path of the jet firing rockets in Lugansk.
(The second, better and much more detailed assessment can be found here.)
Also look here: Could a Russian jet with a friend-or-foe system from a Crimea plane have fired into Lugansk?

In this video a jet can be seen firing and next we see the aftermath of the destruction.

Lets first determine where the cameraman is standing. This screenshot can be used to determine his position: 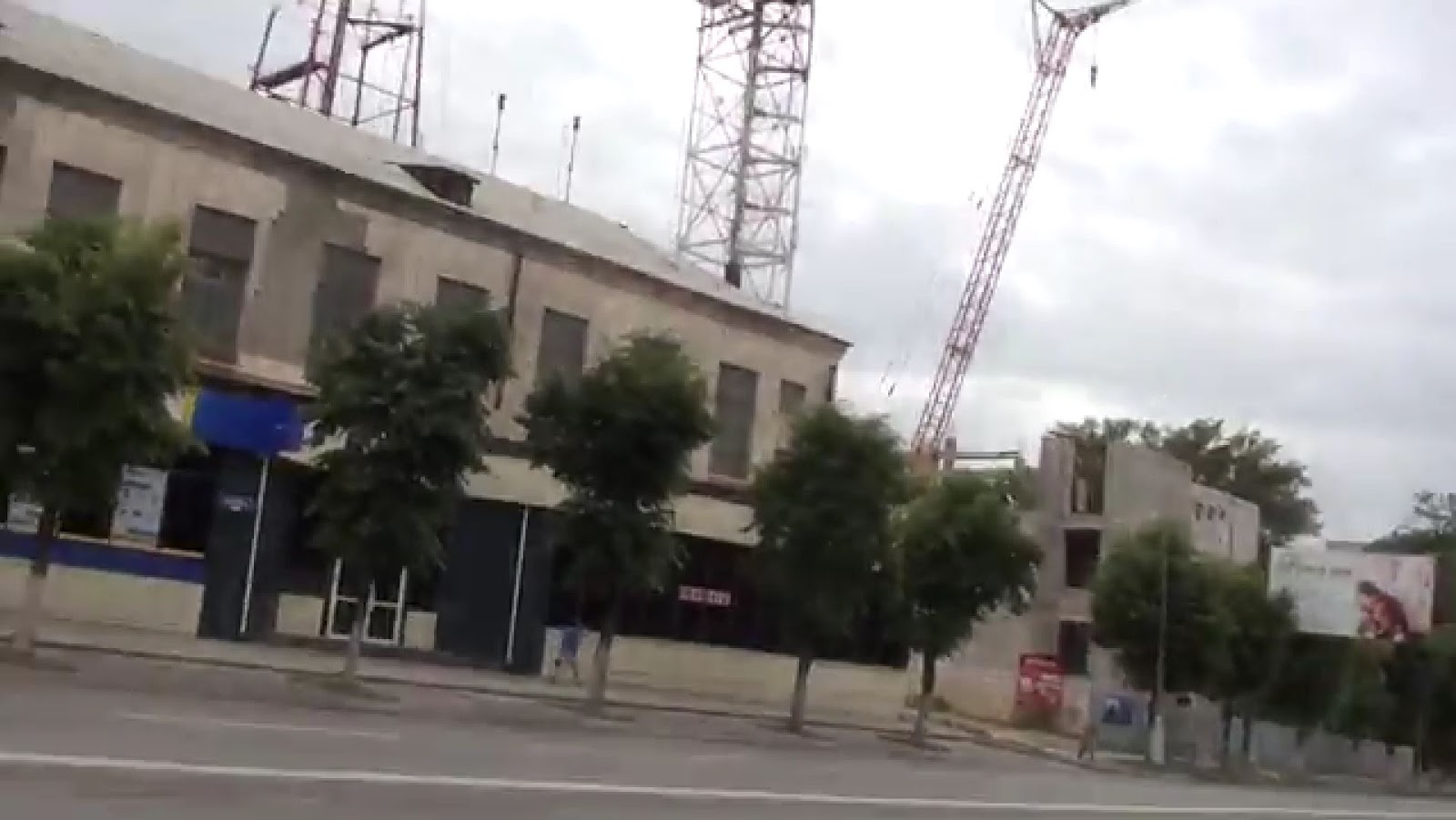 It means he is standing here: 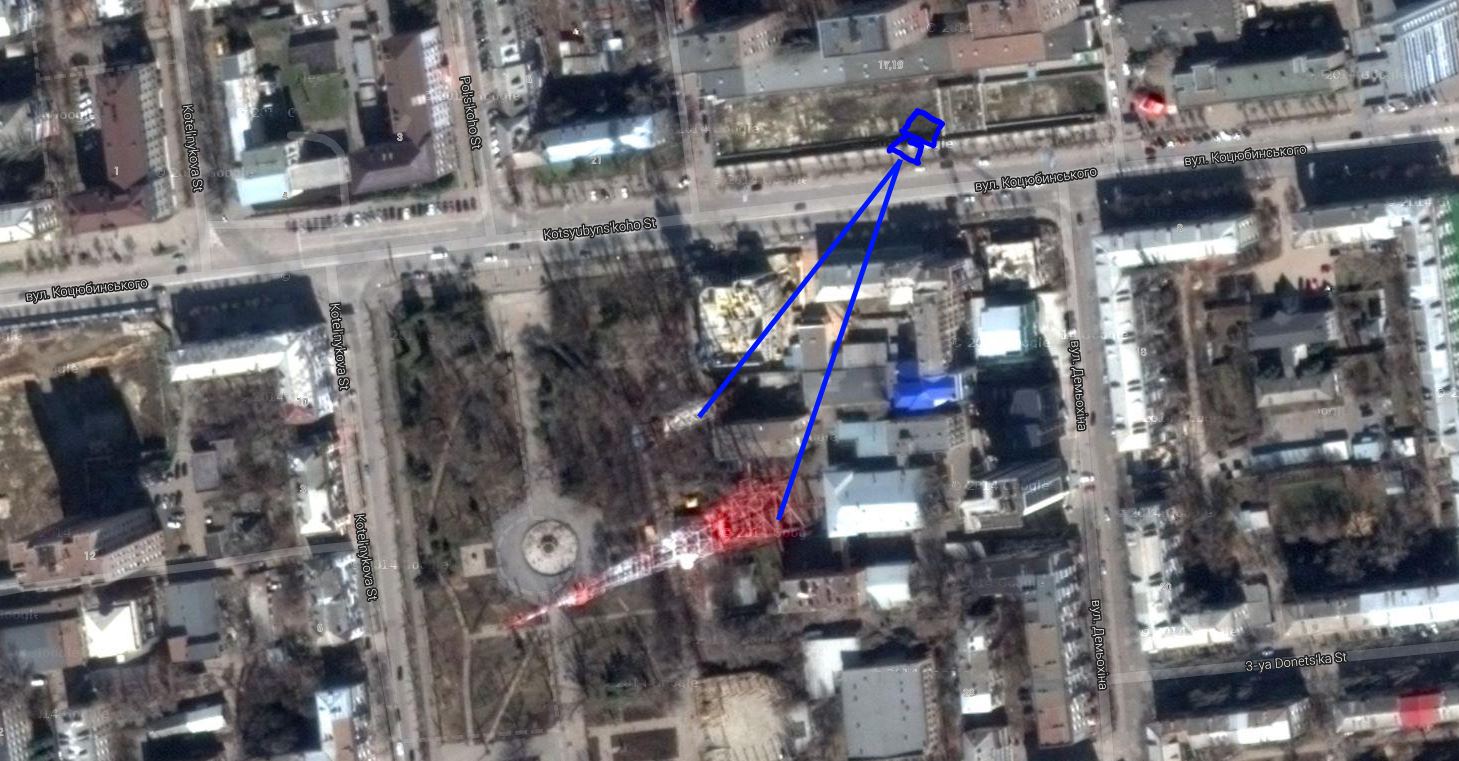 And same in relation to the park, where the explosions were: 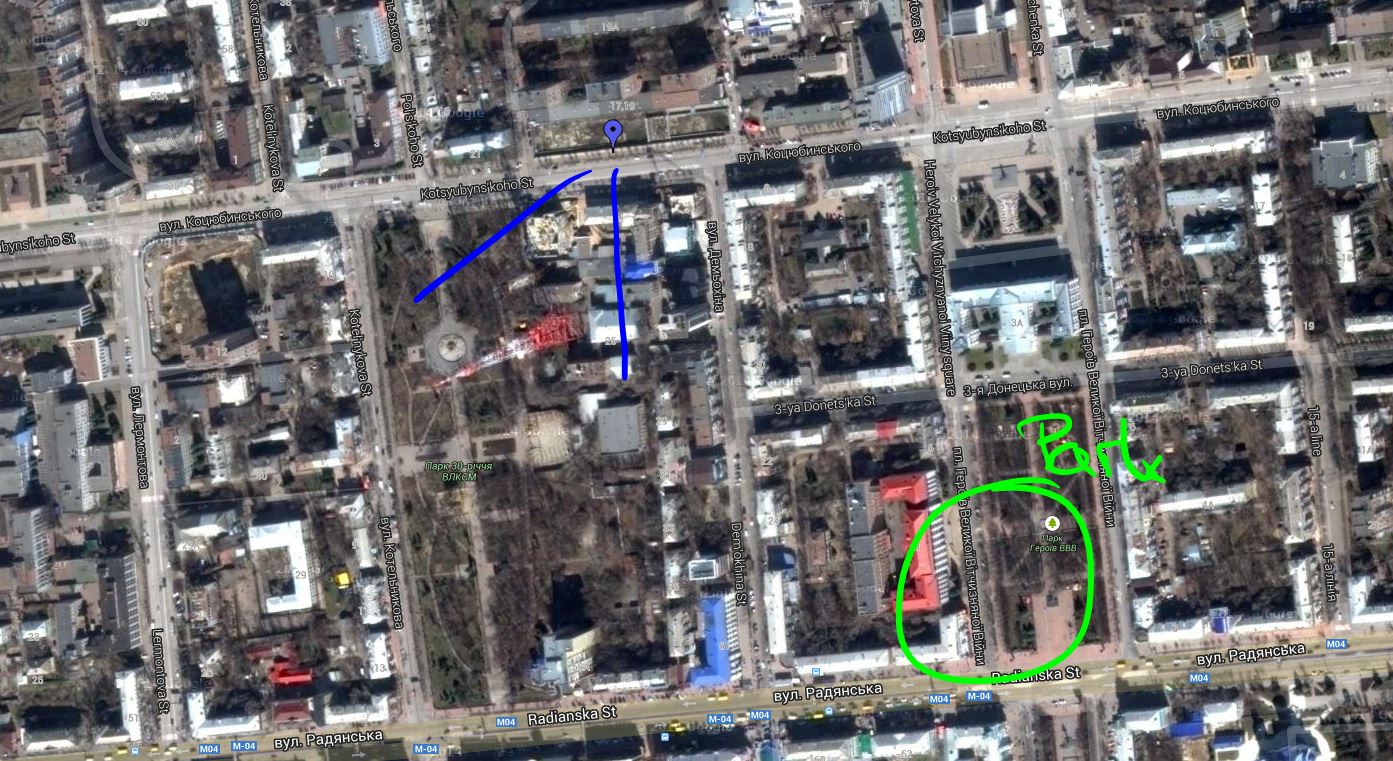 So for the cameraman, the park is on his left side.

With these screenshots we can approximately see what the flight path might have been: 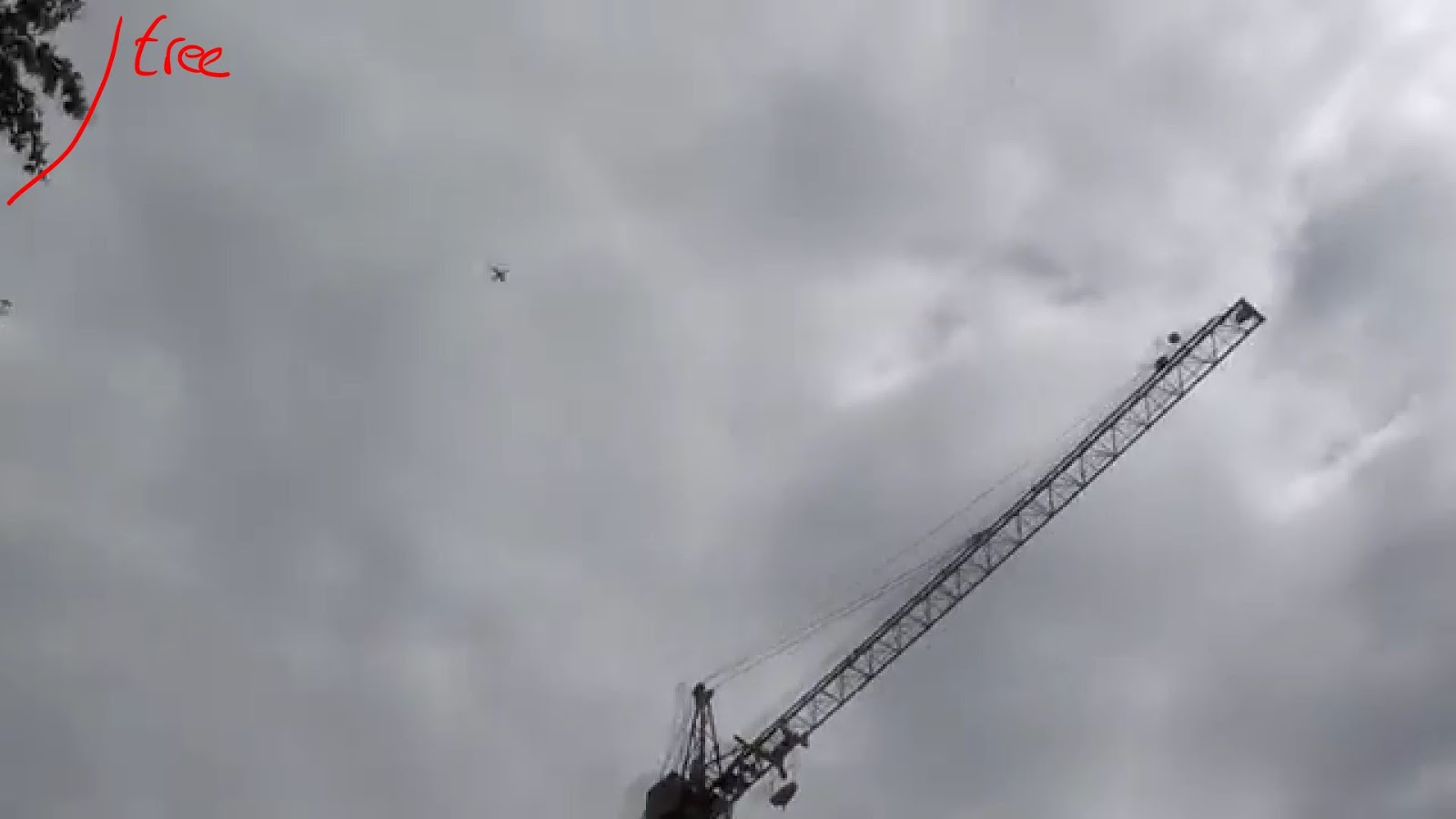 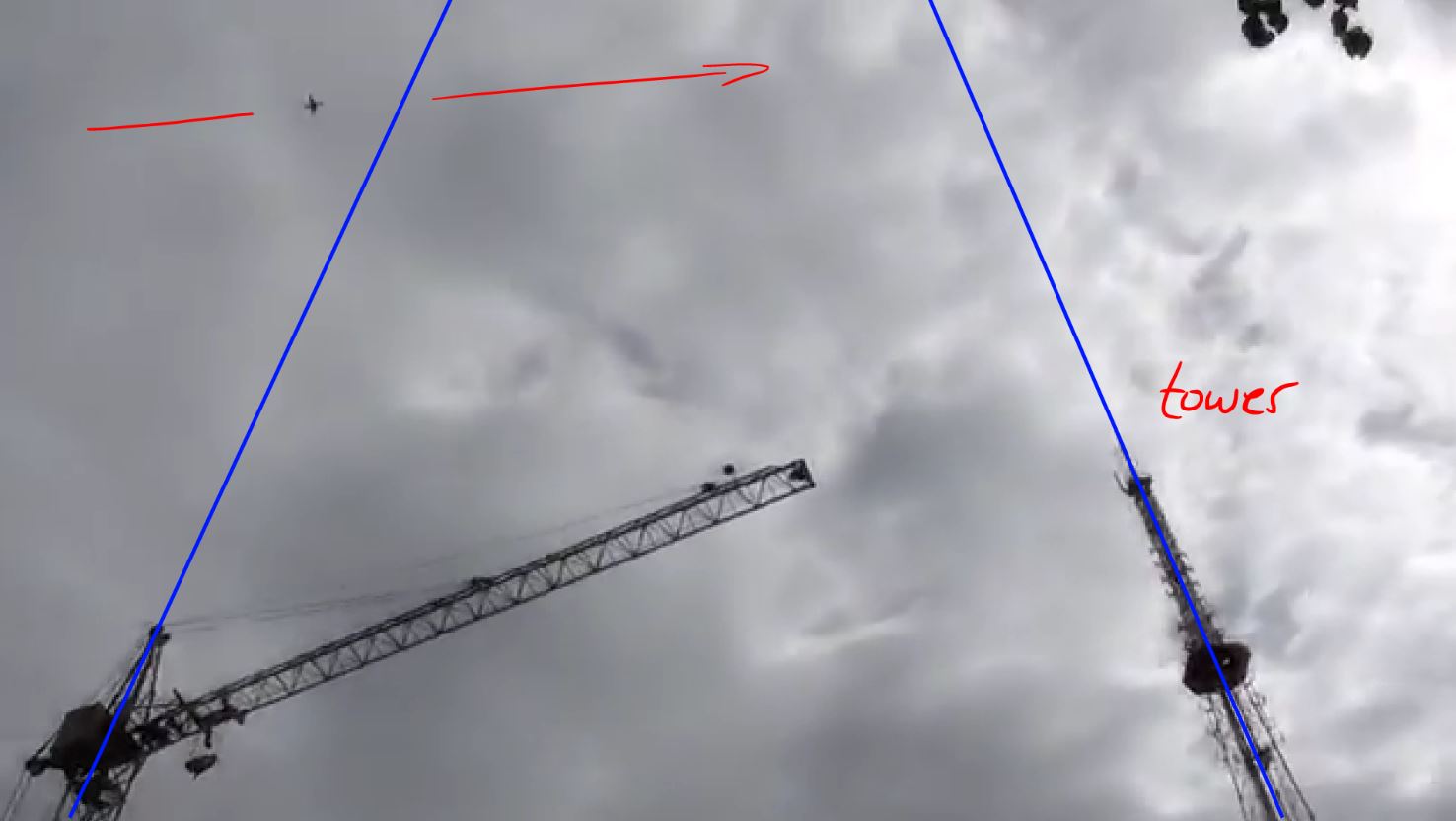 From this screenshot we can estimate into which direction the rockets are fired: 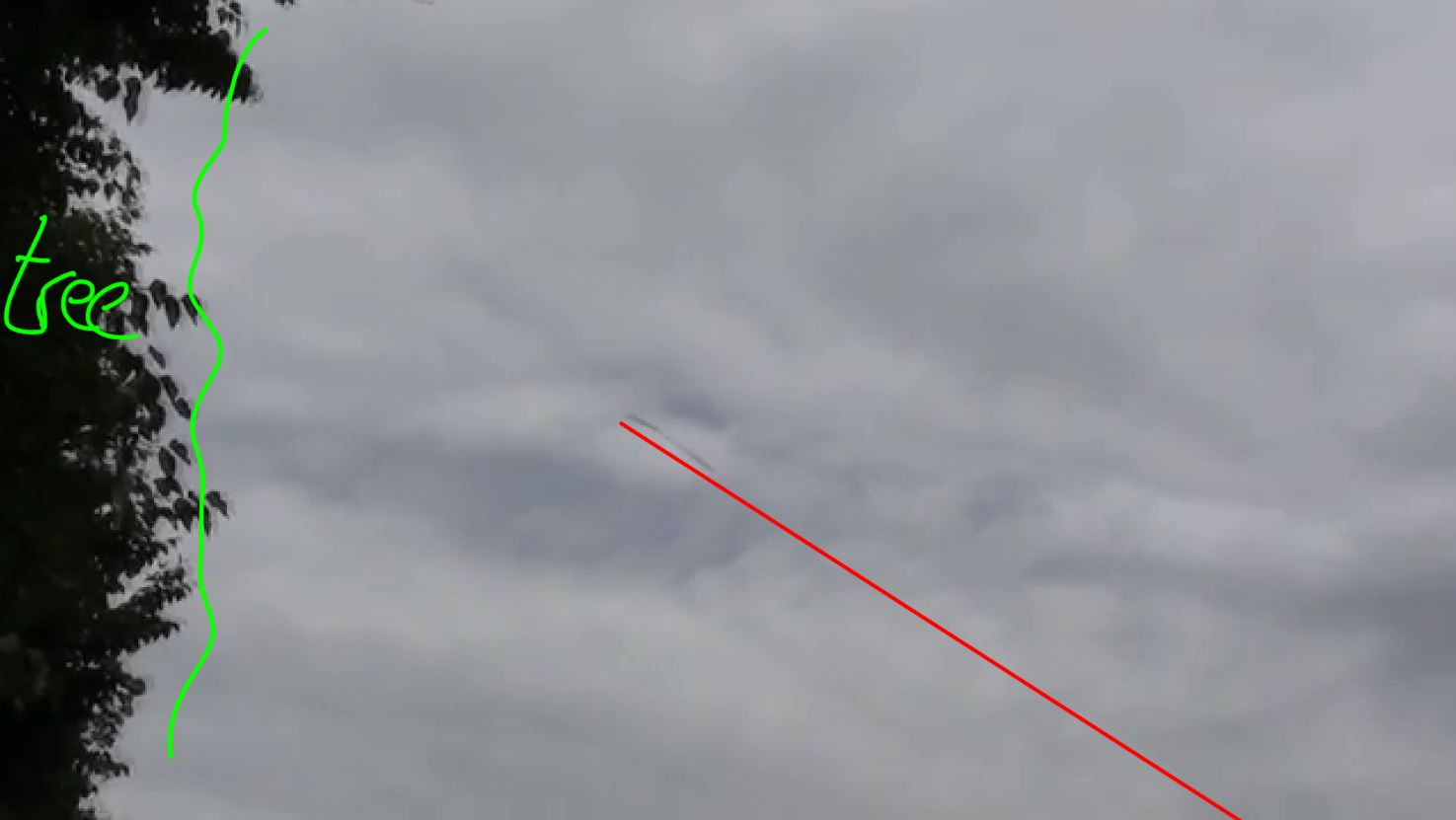 On the left side is a tree. It means his filming position is like this: 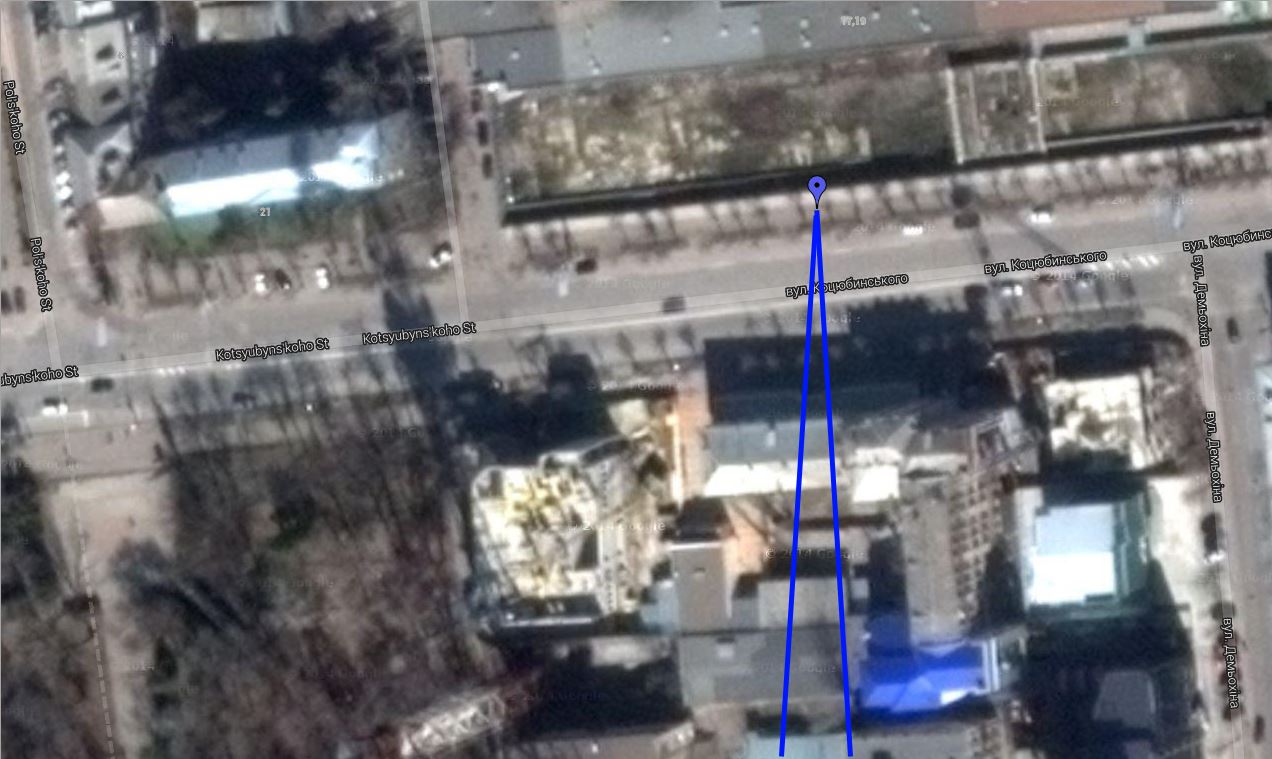 On a larger scale it looks like this, now including the directions the rockets are fired in: 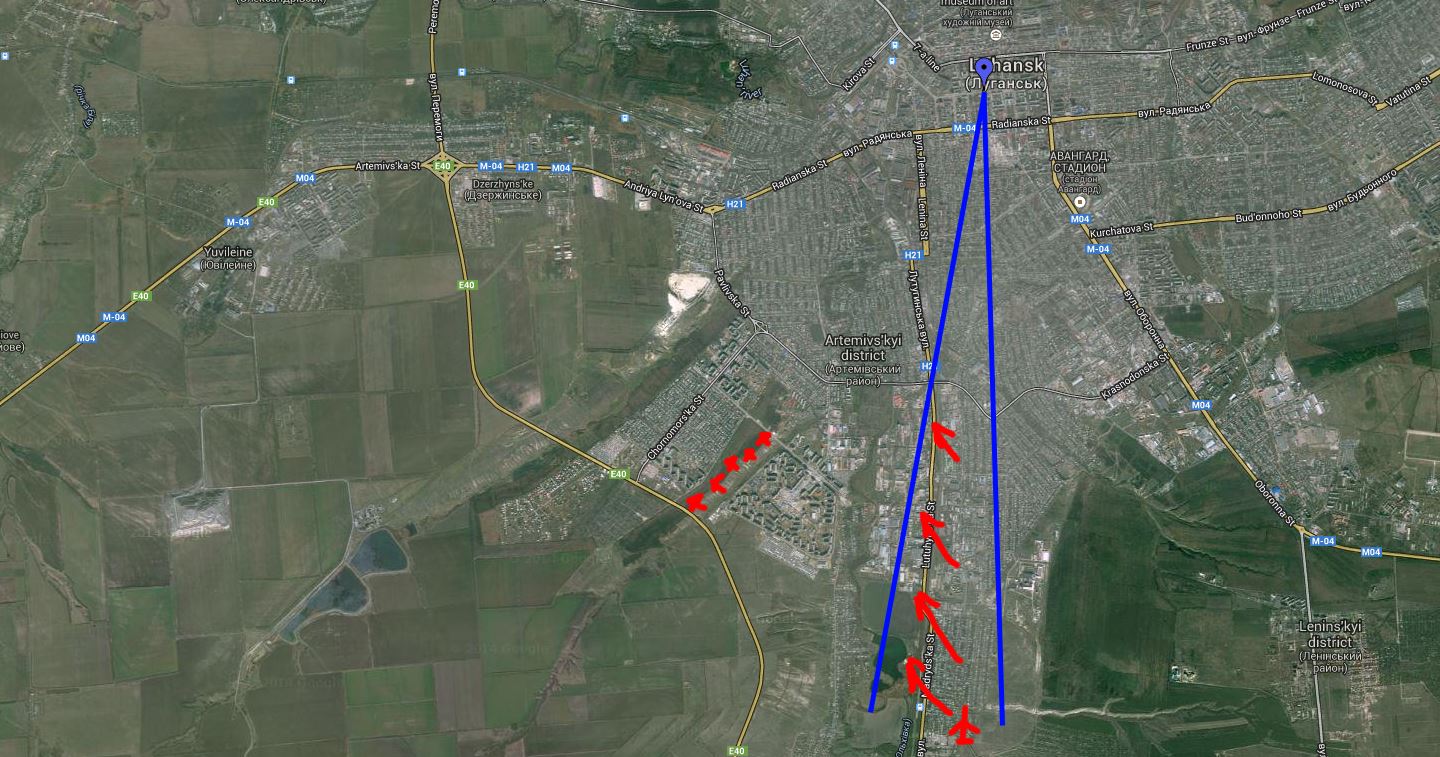 (This is also wrong. Unguided rockets are always fired forwards and cannot be fired sideways.)

It depends on what distance the airplane is flying from the cameraman, at what he exactly is firing at. But we know from other videos there is a battle going on alongside the hill where I put the crosses.
It is almost certain that that is what the jet is firing at.

If the jet would be firing at the park (on the left side of the cameraman), the rockets would have to have this direction: 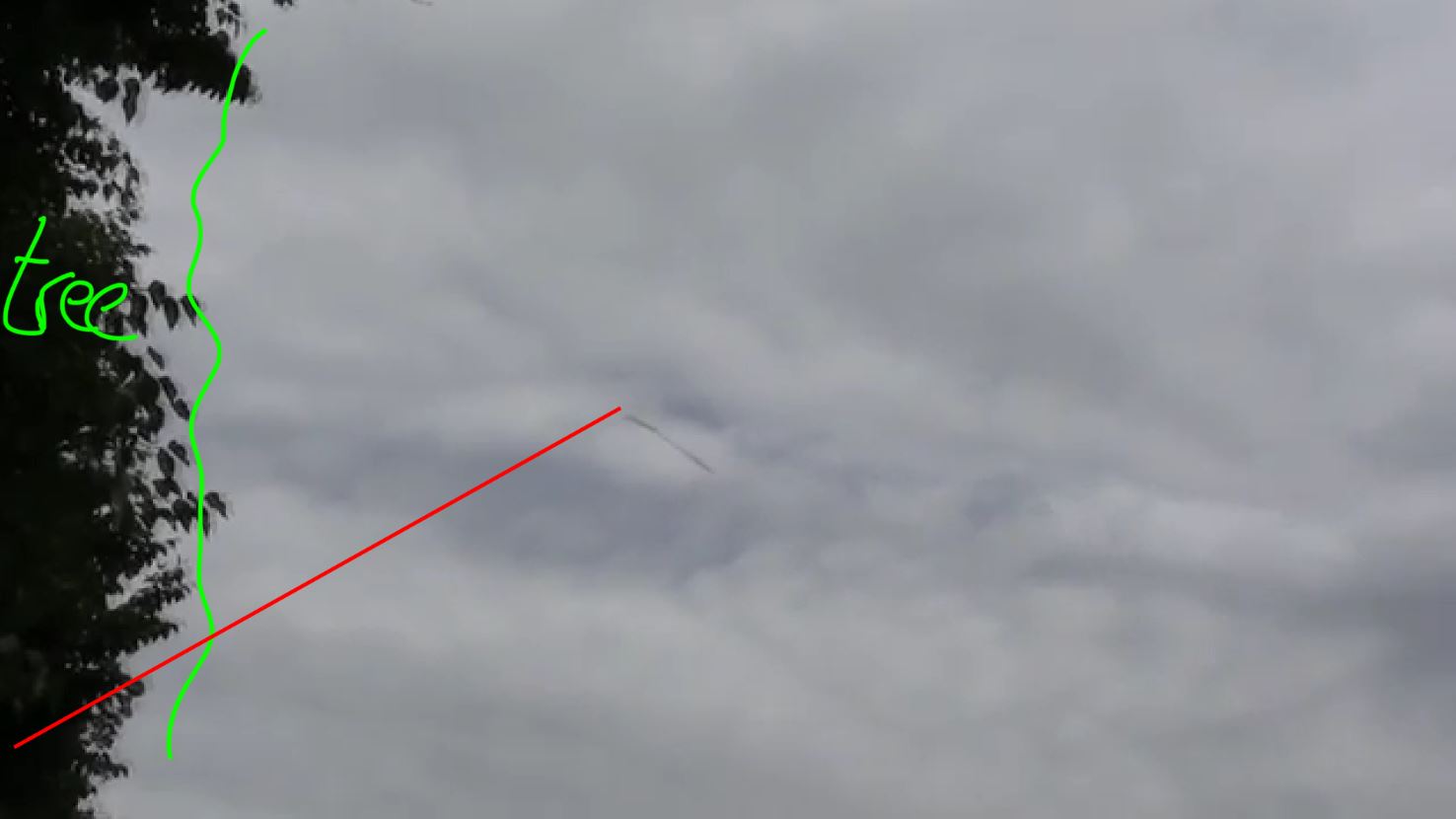 Furthermore, when we look at this damage: 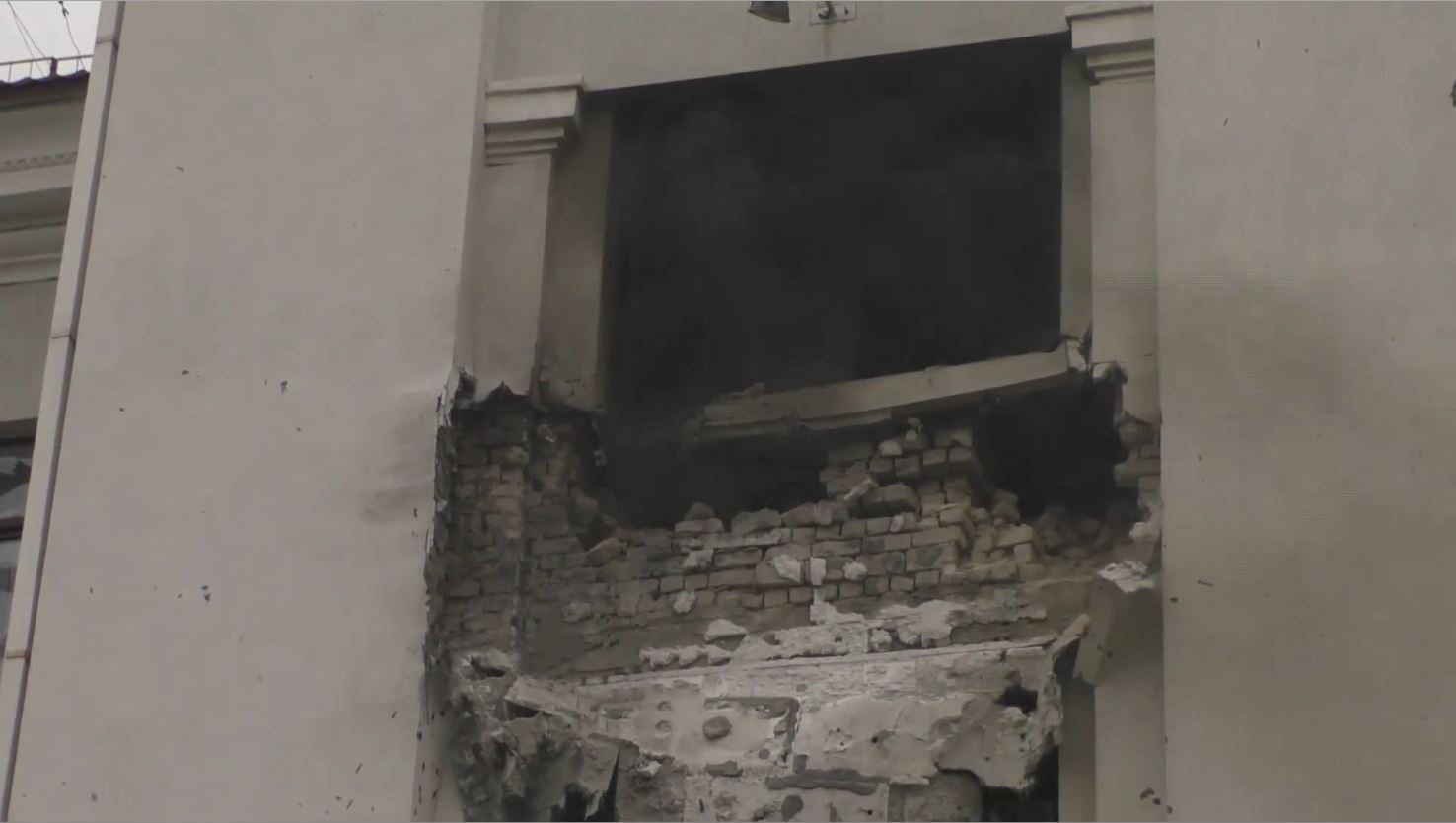 The rockets would have needed to come from any direction of the purple arrows: 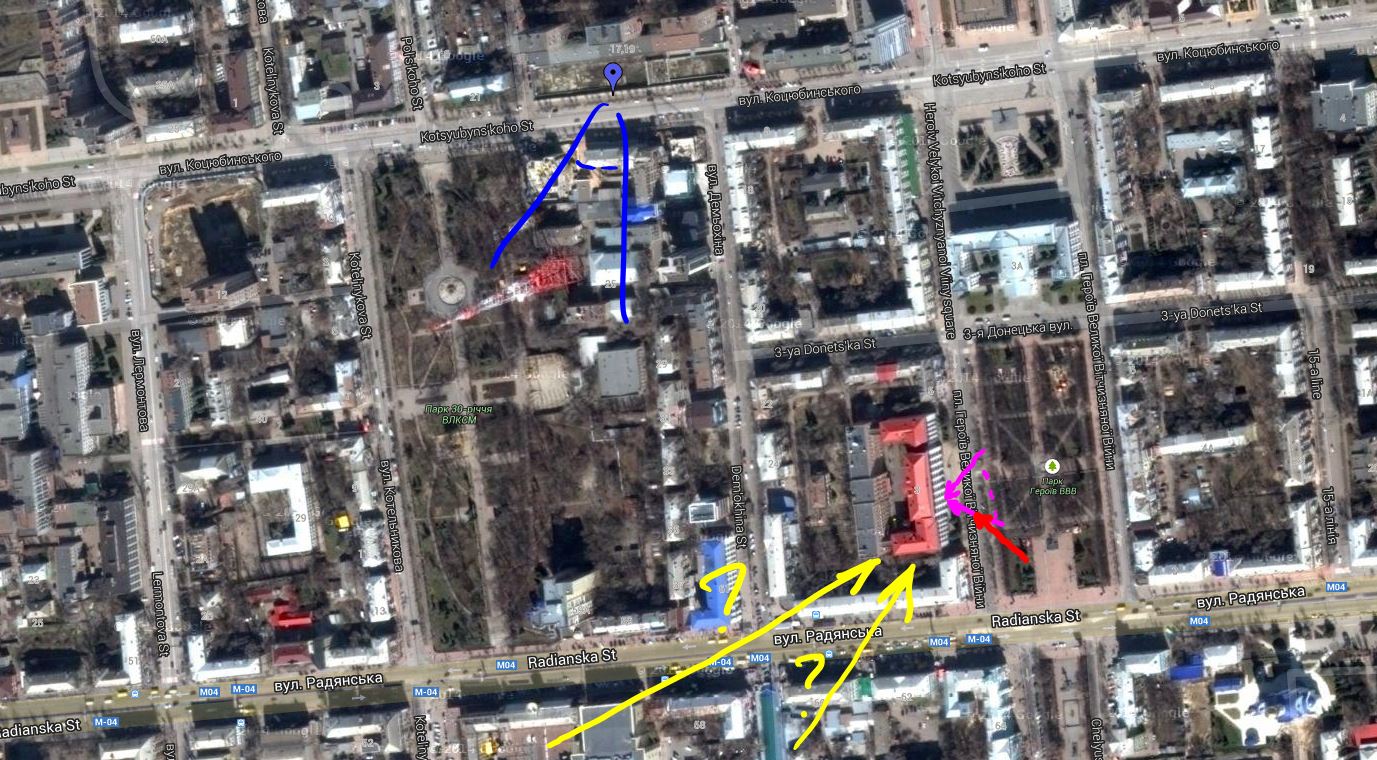 We know from the surveillance video that one of the explosion was something like in the direction of the red arrow. If the jet would have fired into the park, the directions do not match. And the red building is faced with it's back towards the rockets, while it was hit in the front (purple arrows).

(Since the jet was flying from the East to the West it absolutely could have hit the building.)

Also see: Do multiple smaller impacts indicate an automatic grenade launcher has been used?
Also see: The attack in the park was a setup?
Also see: Ukraine needs to come with a real good explanation.