I think Ukraine needs to give a REAL GOOD and HONEST explanation of what happened with the jet attack on 2-6 in the park in Lugansk.

1.
A MANPAD was fired and hit an airconditioner. It was operated by somebody who did not now how to handle MANPADs.
Completely inadequate explanation. The heat of airconditioners do not attract anti-air missiles.
It is clear that there where MULTIPLE explosions and impact craters.

2.
An RPG had been fired from a tree.
In first instance it looked like that, but since multiple impact craters have been found, this option has to be ruled out. The blasts in the tree were actually exploding grenades in the park that were visible through the tree.

3.
An automatic grenade launcher simultaneously fired with an attack from the jet which was firing at a different location.
As I have calculated in the detailed analysis of the flight path of the jet, it is highly likely that the jet fired the rockets at the park. Theoretically the rockets could have landed somewhere else in the city. But we know of only ONE location where they could have hit... that is in the park.

Other bloggers also come to the same conclusion:
Link 1
Australian journalist
OSCE (military observers) say it was likely a rocket attack: "On 2 June, shortly after 15:00 hrs, rockets hit the occupied regional administration building. Based on the SMM’s limited observation these strikes were the result of non-guided rockets shot from an aircraft." Link.
STOPfake also rules out many alternatives.

Here is a video with the debri:


I asked a soldier who is an Afghanistan peace mission veteran to look at all the videos and data and he says everything looks like a S-5 or maybe S-8 rocket attack. 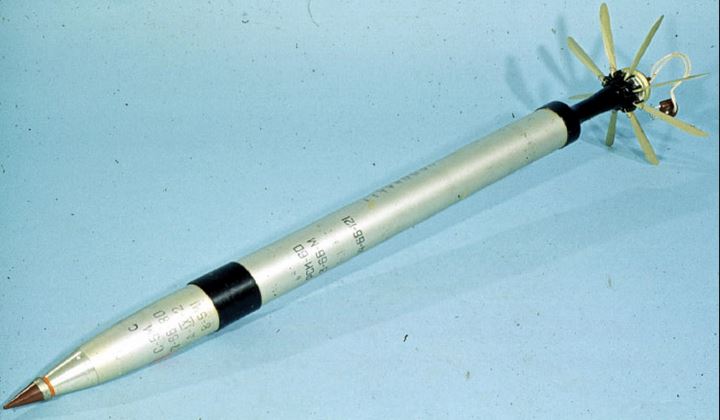 So it seems we have to face reality: a Ukrainian jet fired rockets at the park in front of the administration building on June 2nd in Lugansk.

So...
that Ukraine is fighting criminals who occupy governmental buildings so the government cannot function anymore...
and Russian militia who kick out police officers from their HQs so every criminal can go looting and murdering...
and self appointed mayors who are not afraid to kidnap and to kill...
and pro-Russian militia who ambush inexperienced soldiers...
and Chechen war criminals without any respect for the dead...
and you name it...
Ok, that's one thing.
But a rocket attack in a park onto unaware civilians who you want to protect from these guys?

So again: I think Ukraine needs to come with a real good explanation here... I mean: REALLY GOOD.


Here are some of the responses I got, with some comment from me:

Hmm. That would suggest they missed a target and the rockets would have hit something random. But in this case they hit the administration building, which is something very specific. I think they hit it deliberately.

@djp3tros @MiddleEast_BRK it is so stupid i dont believe it, it s also inconsistent with the general way the whole #ato is conducted
— hyperudi (@hyperudi) June 4, 2014

I agree with that. Maybe the pilot was bribed?


@djp3tros Russian needs to come with a real good and honest explanation of why they have invaded #Ukraine
— Kris Sirk (@sirk_dj) June 4, 2014

Completely true. It is indeed clear by now that Russia is: mafia running a country. Ukraine has to try to be different.

Maybe it is... when it is full of rebels. But now it hit mainly the park and just civilians. It sound smore like retaliation: you attack our border guard HQ, we will do something nasty back to you. That may be 'Russian style', but it should not be 'Ukrainian style'.

@Veganimal1 @djp3tros putin said "we will hide behind your civilians'. he do..
— Pierre Jean Duvivier (@pjduvivier) June 4, 2014

@djp3tros @pjduvivier The real issue is the separatists fighting with human shields as to cause as many civilian casualties as possible.
— Veganimal1 (@Veganimal1) June 4, 2014

Oh I get that point. And when we look at May 9th Mariupol with 'unarmed civilians' being shot in the legs... these people are in fact soldiers disguised as 'unarmed civilians', because their intentions are to harass and disrupt the army.
But in this case a park and a street was hit with random people.

Lol. I don't feed them. If this attack is a fact, the Ukrainian army feeds the trolls.


Ok, I have some more theories:


If you have any suggestion, let me know. You may reply to this tweet, or retweet it:


UPDATE: Did a Russian jet with a friend-or-foe system from a Crimea plane fire into Lugansk?