@RobPulseNews traced and captured several conversations about the disappearance of the Scottish Graham Phillips, who works for Russia Today. 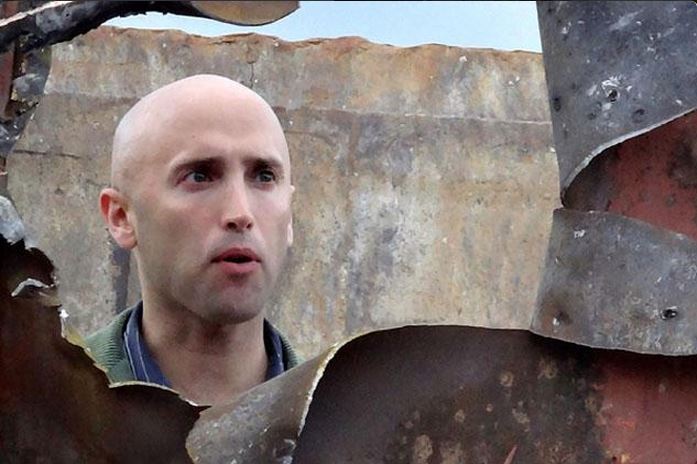 Graham is what we call a 'Russian paid Disinformation Agent'. He is deliberately spreading disinfo, lies and hatespeech against Ukraine and when he was in Slovyansk he has been secretly filming Ukrainian positions and reporting this, jeopardizing their safety.
He totally lost his credibility when setting off a tripwire when filming near Kramatorsk airbase and reporting this as 'being shot at by Ukrainians'.
He went back for a break to join the worldcup football but return a couple of days ago to Ukraine.

This is what happened next: 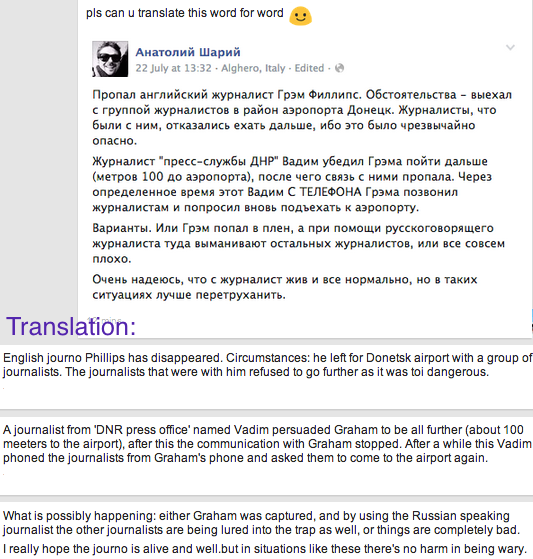 @27KHV is a 'brother in arms' of Graham (read about @27KHV here) and can not be trusted on his word. He recently asked publicly for photos or videos of mourning relatives of victims, because 'he was working on something'.
Nevertheless when asking about Graham, his concern seems real: 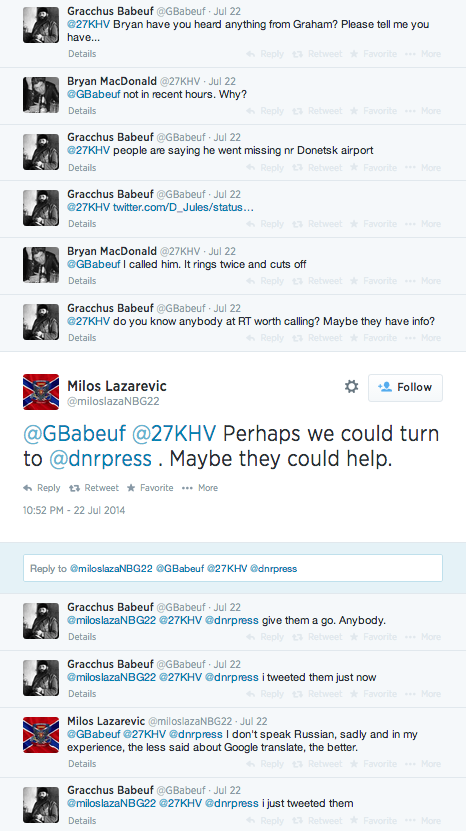 No response...
This is an official statement though from DNRpress: 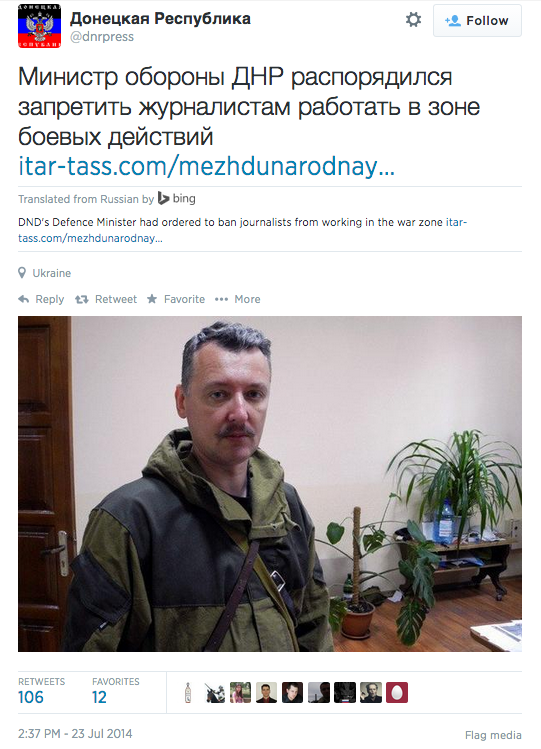 They do not want any journalist near anymore... 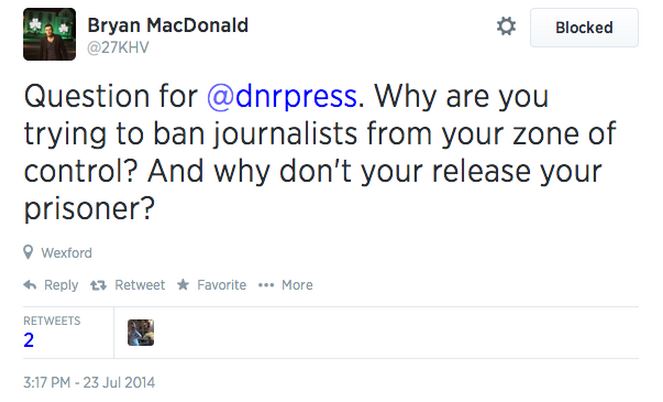 So what is going on behind the scenes? Because OFFICIALLY it is said that Graham has been detained by Ukrainians.

Yet, both sides say they have no info on him: 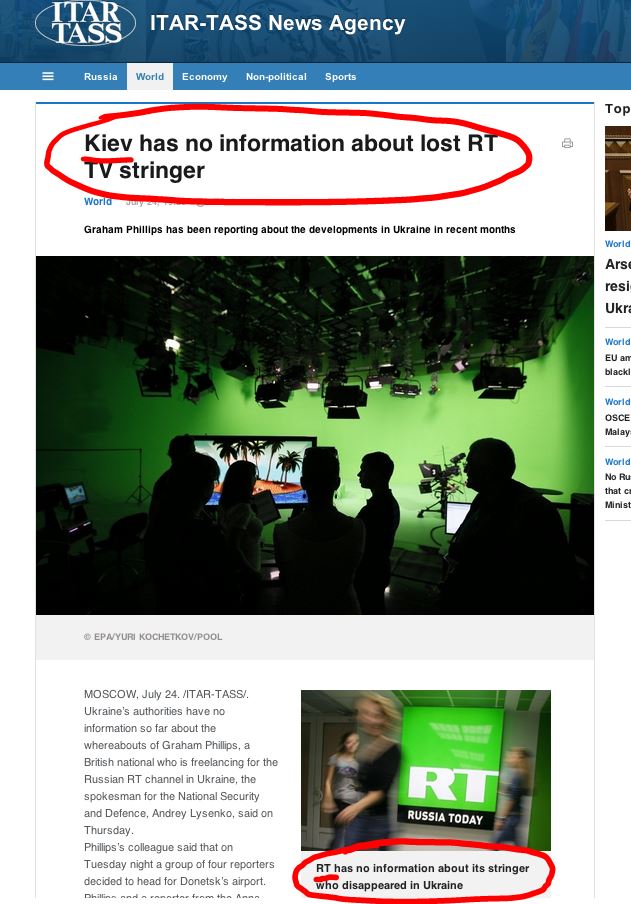 Earlier a Russian Today cameraman had died because his team had been lured into a compromising situation. They openly drove a bus into a Ukrainian army base in Donetsk, thinking they would go filming surrendering soldiers, just to get shot at. It seemed a DNRpress employee had deliberately given them false information.

Footage of the dying cameraman had been broadcast in Russia, blaming the Ukrainian army was 'shooting at a bus full of women'.

Is it possible that they have setup a trap for Graham too, who is not really contributing to the credibility of Russia Today anymore?

This is how RT reports about the issue:


You see how they talk about Ukraine being the most dangerous country for journalist while these journalists all died in their self-proclaimed Terrorussia aka Novorossyia?

Also a CNN fixer has been detained by illegal DNR. See this article and video.

Check Robs timeline for the latest news about Grahams status.

Important issues will appear on this blog too.

UPDATE
This news article says Graham has been deported out of Ukraine and is not allowed to enter for 3 years. 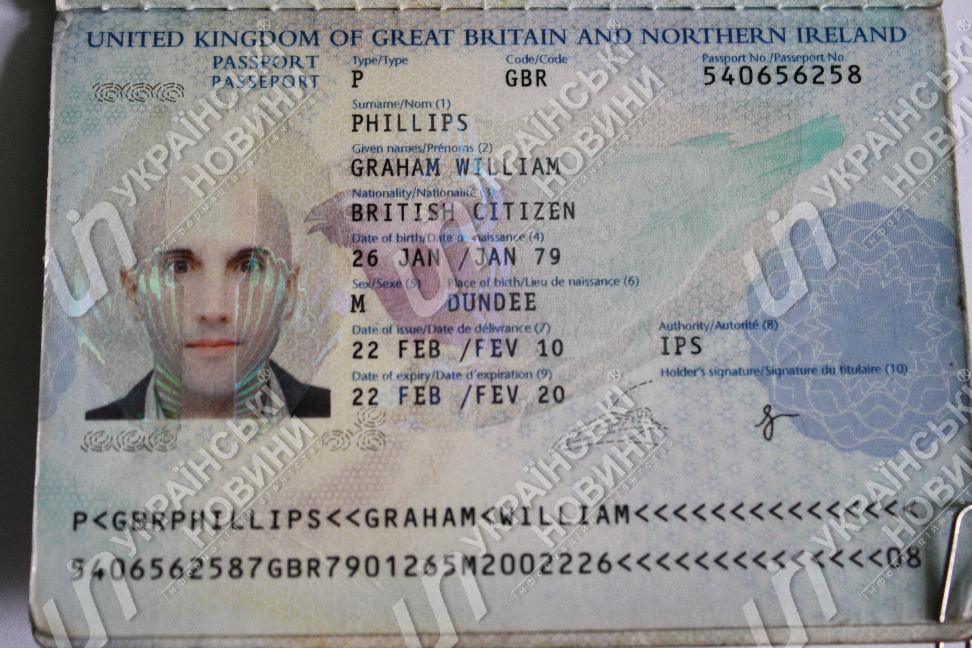 This is by far the most right and just thing to do. Basically when he came in, they gave him another chance. First thing he does is going to the front line to a level where he can be easily shot at. For his own safety and for the safety of Ukrainian soldiers, this is the best solution.

Now, if only he would learn to shut up with his false accusations and hate speech, the world would become a much more beautiful place...

Excuse me? The Terrorussians put him in a room that was fired at by artillery? They DID want to kill him! Or is it just another lie so he can be in the middle of the attention?

Pfff. It's game over for him. We can ignore him now.