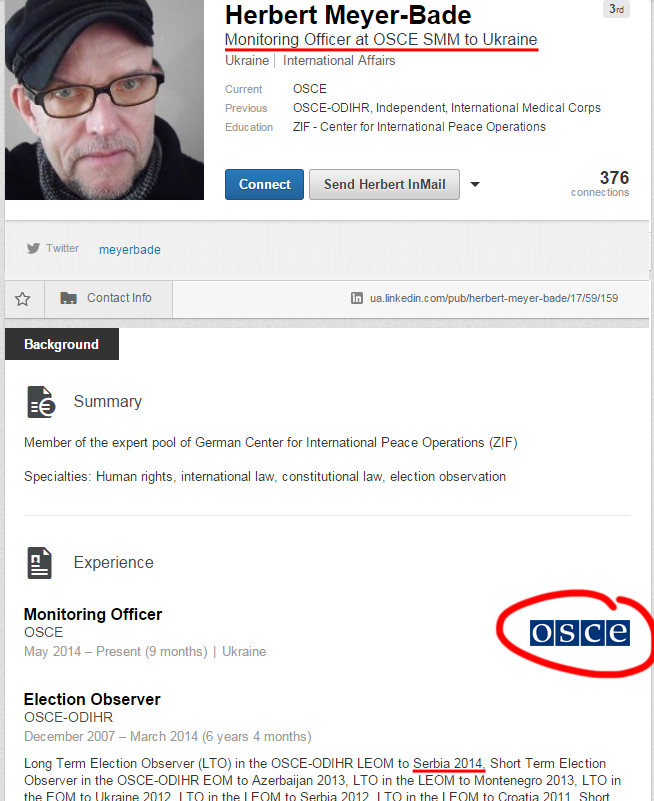 It says he is a 'Monitoring Officer at OSCE SMM in Ukraine'.

When we do a search in Google for his name and OSCE, a PDF-file shows up: 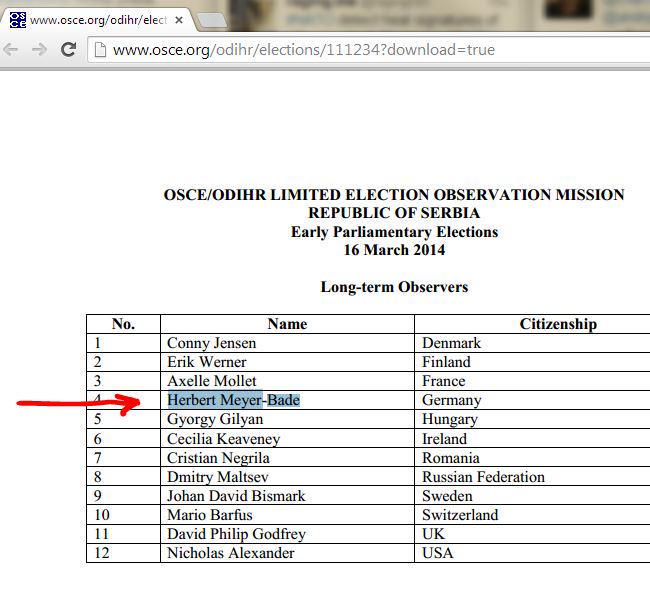 It says he was on a election observation mission in Serbia in 2014. This was also mentioned on his Linkedin profile.
So it is clear that he (or at least his name) is linked to OSCE. It COULD be an imposter who takes the identity of a OSCE person, but this does not seem likely. If more info comes in, I'll update.

Now here you can find an interesting tweet of him: 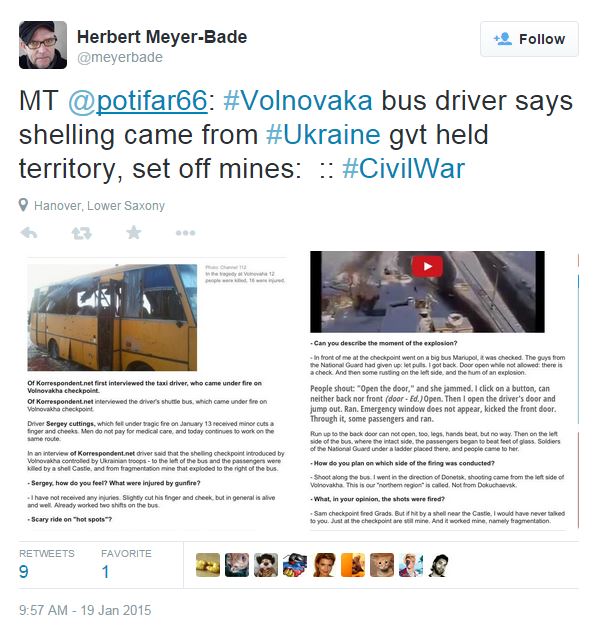 Now that 'bus-driver'story started with this article. It is from Korrespondent.net owned by the youngest olicharch in Ukraine Sergey Kurchenko, who, according to wikipedia, has left Ukraine after Yanukovych fled. A warrant for his arrest has been issued...
Ok, get it?

As has EXTENSIVELY been analyzed in this blog, the bus has been hit by a GRAD rocket coming from Dokuchajevsk. We even found the video launching the rockets...

Whether this bus driver "Sergei Cherenko" is a real person, a fake name and/or really a bus driver is not clear right now. Nobody bothered to investigate, because this is a FAKE PROPAGANDA STORY...!!!
And some of these stories spell his name as Cherenko while others as Chernenko...

So Herbert Meyer-Bade, who is supposed to neutrally monitor events in Ukraine, tweets OUTRIGHT propaganda lies into the world in an attempt to obscure the criminal event about Volnovakha...

Furthermore he uses the hashtag #civilwar a lot (archived thread). A clear attempt to portray the Russian war against Ukraine as a CIVIL war, which it is not! 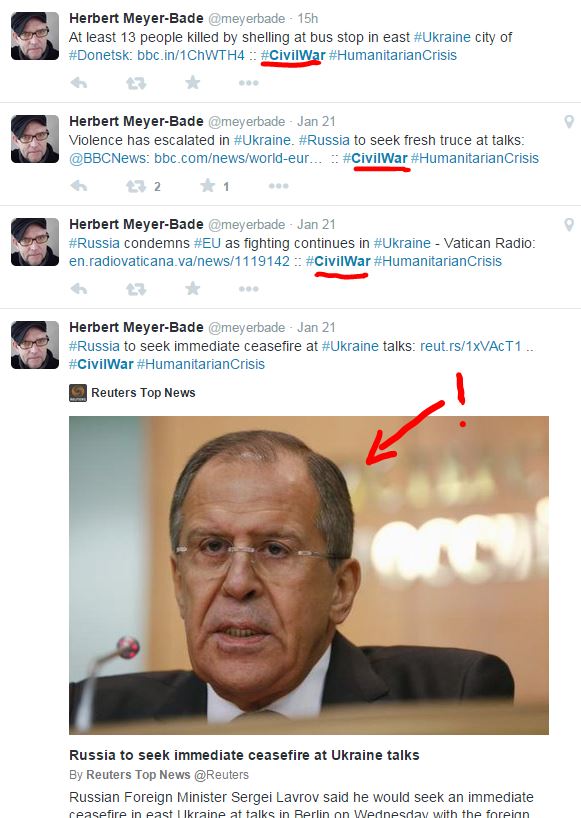 UPDATE 23-1
His entire twitter-account has been removed!!! That is something, but if the man is still working for OSCE SMM then NOTHING changed!
His Linkedin profile is still up and it still says he is a monitoring officer...

UPDATE 3-2
In a private message somebody told me she contacted OSCE about this. She got this message back:

"Dear,
Regarding Mr. Herbert Meyer-Bade, he is indeed an OSCE SMM Monitor who was seconded by Germany. He is currently on leave, and has just offered his resignation. His Twitter account has also been closed.
Thank you for alerting us to this situation. We will do everything we can to continue closely screening applications from candidates for the SMM, as we do for all other positions in the OSCE.

I wrote to Natacha if she could confirm this was hers, but never got a reply back.

JUST IN: shortly after publishing this update on the blog I DID get a message back from Natasha. 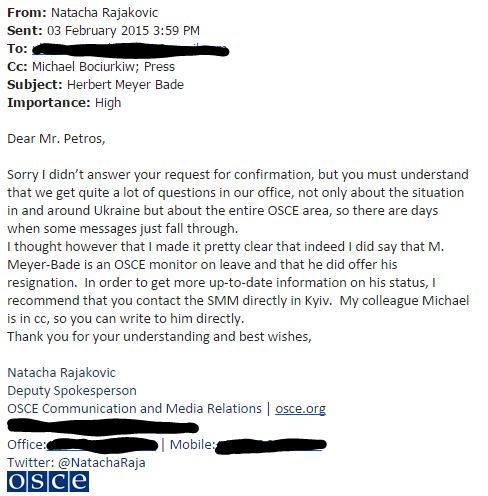 And then Michael wrote this: 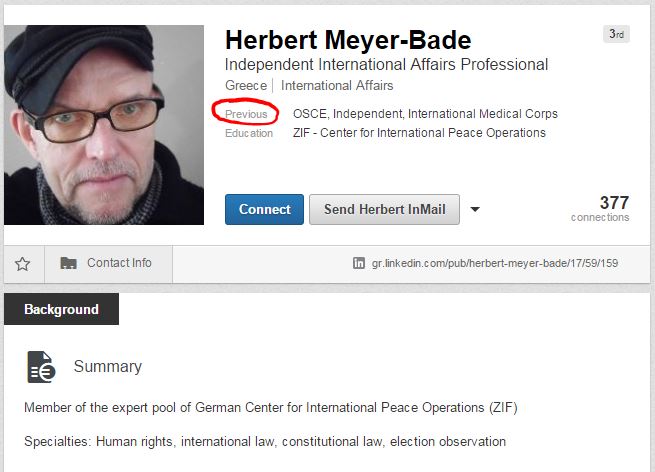 His Twitter-account is back: 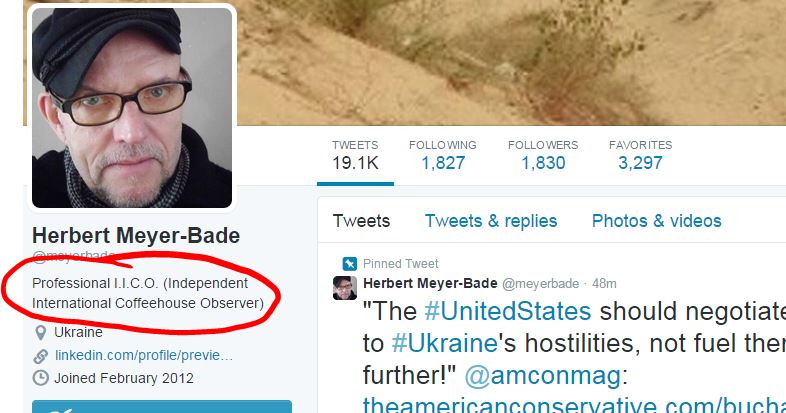 But it no longer shows he is working for OSCE.

He is still tweeting his obvious pro-Russian propaganda:

Conclusion
It seems official now that Meyer-Bade is not working for OSCE-SMM anymore. OSCE did the right thing.

Also see: Aerial photo from OSCE UAV of Volnovakha shows their own NNE direction was wrong
Also see: why did OSCE invite a Russian General to Volnovakha crime scene?
Also see: What's the problem with OSCE?