Military Studies @ArmedResearch turns out to be a Russian Propaganda Troll

I had an eye on him for some time, but he stayed under the radar until today.

With the attack on the Ukrainian checkpoint near Volnovakha where 12 civilians died:

The trolls immediately started to remove their bragging about the attack and spinning stories about how 'Ukraine did it'.
In this case a Ukrainian claymore attached to a tree would have done the job...

I made some screenshots and photoshopped some clarifying text to it to show the nonsense of such an idea:


Can somebody send this to the trolls? Maybe then they stop justifying Putins killings. I blocked all of them already. pic.twitter.com/pYv3gi2oiJ
— Ukraine@war (@DajeyPetros) January 13, 2015

And especially at such moments trolls may come out of their holes...

He is trying to lobby for the Russian Propaganda twist of it!!! 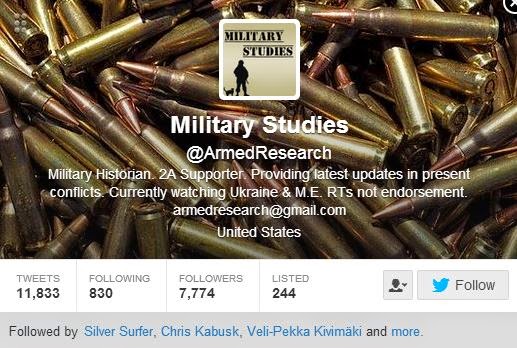 I responded to him and saved his answers meanwhile, so he could not delete them like some of his friends do.

He tries to stay under his cover... But by NOT condemning the brutal killings of civilians by the Russian MLRS attack, he justifies it and shows who he is:

"all your propagandist Ukrainian friends"... Speaks for itself who HIS friends are.. His "Let's do this" means he understands he can not keep his cover anymore and he comes out.

Meanwhile another troll comes to help:

And here we go: 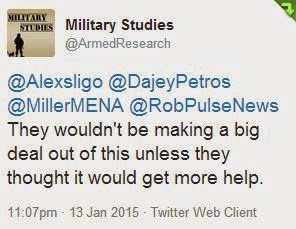 Oh wow, that was clarifying :D.


@murderotica_ Me too. But he stayed low until today. He gets a lot of money for all our replies today... @ArmedResearch @MillerMENA
— Ukraine@war (@DajeyPetros) January 13, 2015

And ANOTHER troll comes in telling lies:

Well, that was funny actually :D.


Oh wait! This one came in late... @ArmedResearch informs us about his brotherly account(s) too:

UPDATE@rConflict responded to this as follows:


@DajeyPetros we find it pretty offensive that you are trying to imply that we have a pro Russian stance in your article.
— Conflict News (@rConflictNews) January 14, 2015

So we had a discussion where I asked him to clarify himself, but he answered 'they' wanted to be neutral:


@DajeyPetros we try to run an unbiased news outlet. We don't let our personal feelings affect our journalism unlike some on twitter.
— Conflict News (@rConflictNews) January 14, 2015

You can read the whole conversation here.