In the style of war that Putin fights, influencing the public opinion plays a very important role. It means there is a legion of internet soldiers fighting an information war on the internet. Of course there are also regular (pro-)Russian people involved in their internet-army.
These people are called trolls and this is how you can recognize them on Twitter:

level 0 - Software agents
In Twitter it is possible to generate automated responses on tweets on certain keywords. For instance: I tweeted a message with the word 'invasion' in it, in combination with 'Russia'. I got a complete irrelevant to the rest of the context and overall general statement back, that sounded like: "There was no need for Russia to take measures, if the West hadn't messed with Ukraine in the first place." From an anonymous user... lol.
Banned!

level 1 - Egg Trolls
These little buggers are the front line of irritating Russian trolls. They follow you, they retweet you and favorite you and give you the impression that you have a fan. And then they start to question you in your tweets.
This is an example:

A statement like this means you have to go into a discussion. They try to disrupt, cast doubt, disinform and you name it. When you take the bait, it can keep you busy without getting anywhere for a long time.

When you check their profile you see something like this: 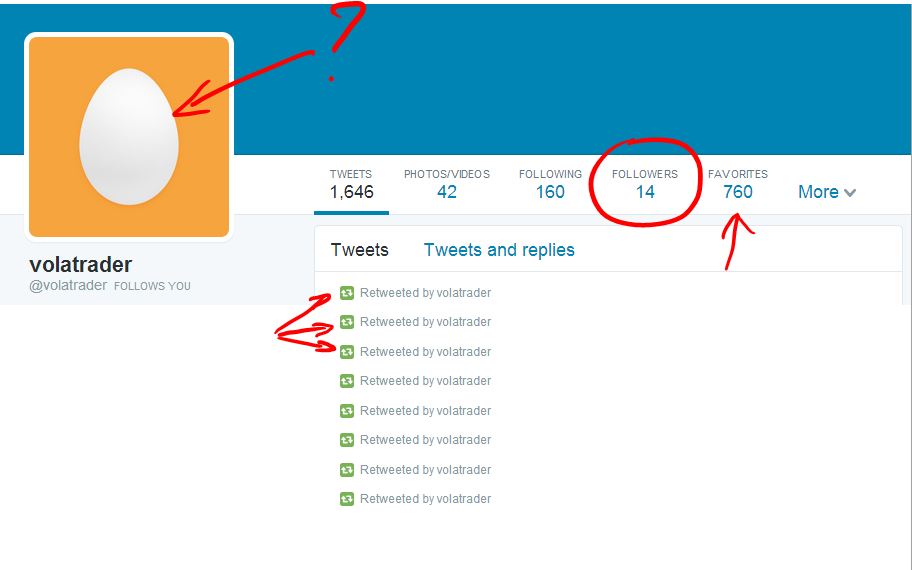 This retweeting they do, is totally pointless, because their only followers are other pawns.

When you look in their replies you can see this: 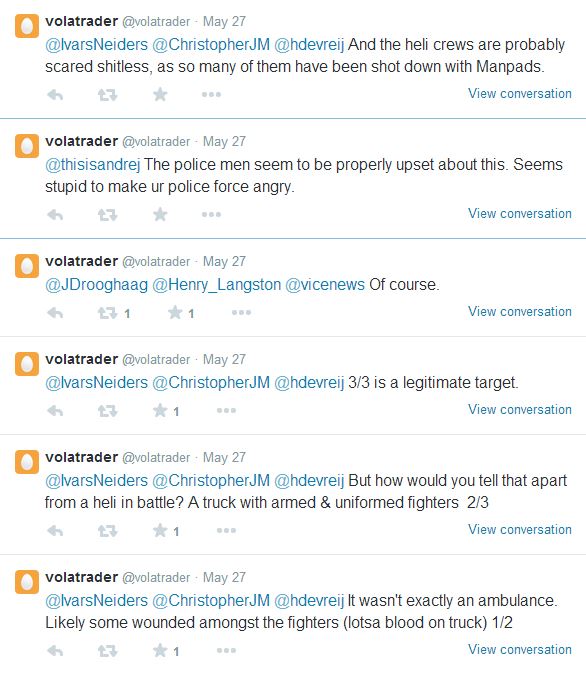 All they do is question (and irritate) you.
Ban them! They have not even hatched yet!!!

UPDATE: You may understand that exposing trolls makes them angry. After publishing this page, as can be expected, a mayor discredit campaign has been launched. Volatrader now has completely cleaned his account of propaganda and behaves as the perfect pro-Ukrainian twitterer, so everybody can see how wrong I was. Sigh.
Ok, here is another one then (0 following, 0 followers): 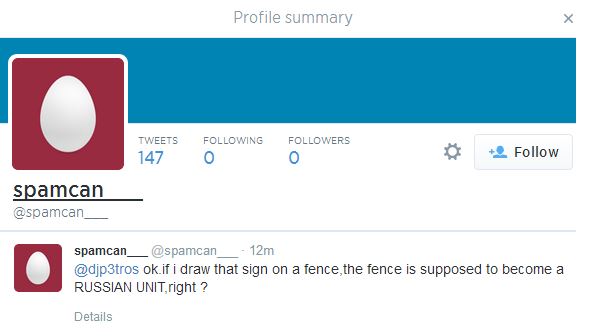 They can make egg-trolls on the fly and by the thousands. I don't want to get bothered by those. Just BAN them as soon as they pop up.


level 2 - Engaging trolls
An engaged troll is an upgraded level 1 troll. He works very similar in favoriting and retweeting a lot, but he does have an identity, does tweet sometimes, simulates to participate with you, etcetera. But in the end the goal is the same: to disrupt, question and get you distracted. 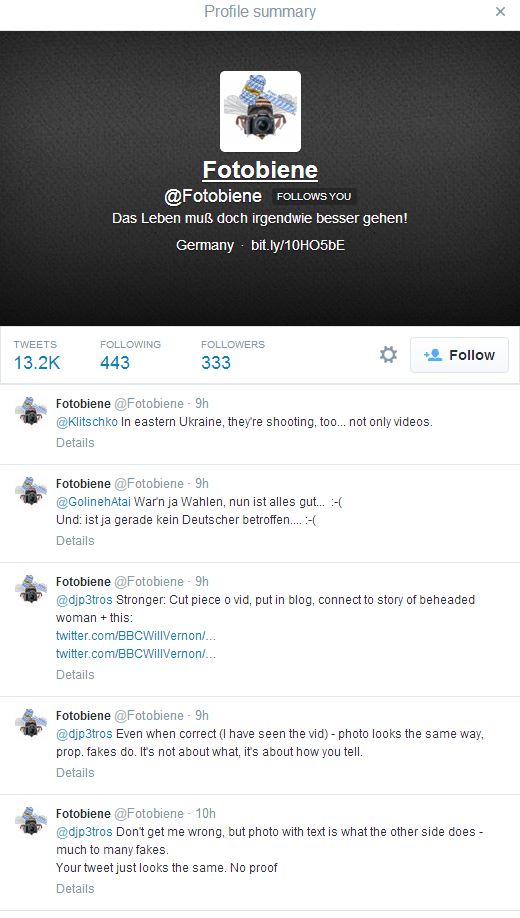 As you can see, there is an image, a description and even a link! But clicking on the link brings you nowhere meaningful. He has a lot more followers and participates.
These level 2 trolls try to work more subtle than the level-1s. He did not immediately start trolling himself, but introduced another troll to the discussion, as if he was helping me find people to convince: 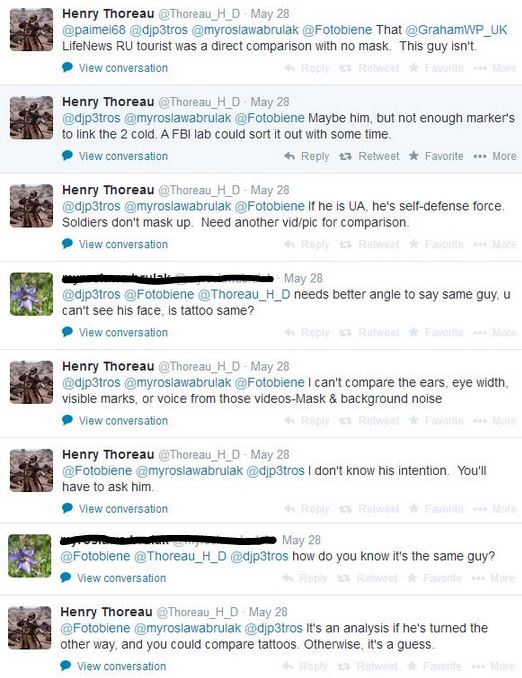 I broke off this pointless discussion (we talked about this page).
Then I started getting messages like this:

He said this in response to my tweet about the woman in Donetsk. It means he knows me, knows what I am doing, and he knows that the level 1 trolls don't work with me, so he has to be more careful and subtle with his trolling. But in the end the intentions are the same.
Of course such trolls are more difficult to spot, but when you have a deeper look into them, you can still recognize them.
Their fate is the same: BANNED!


Level 3 - Wolves in Sheep's clothes Troll
These trolls PRETEND to be pro-Ukraine, they make friends with you, but all the time there is a critical issue they still try to convince you of the propaganda view.
Since I don't make friends with trolls, I can't give you examples :-). But people reading this blog attended me to their existence...
The upgraded version of this troll is the one who gathers information. Basically he is a spy and pretends to be a friend.
Rule of engagement: don't give private or confidential information to twitter accounts/people you actually don't really know nothing about!

Level 4 - Disinformation Agents
These trolls are much more serious ones. They have an identity, a photo, a description. Also they send out true information. But there is always a substantial level of propaganda in it. They don't immediately start an argument with you, but when you go into a discussion with them, they are very rigid.

The goal of these agents is to build a large audience and misinform them with colored, propagandized information. The way they can get many followers is because they somehow always seem to be among the first to send out news about what is going on, links to videos etcetera. And they have an aura of independency around them.

An example of such an agent is this one:

This message looks very reliable. But in reality nobody knows for sure whether this is true. It's just rumors. They refer to and retweet Russian media a lot.

Their goal is not to bug you, but to misinform you.

When you understand the way they work it is not necessary to ban them. I deliberately read disinformation, because the next thing I do, is to ask myself: what is true? Then I investigate and discover and that is how I write my blog :-).
When you are not aware of the level of propaganda these agents send out, it is very well possible you get infected too with the confusion they try to create. In that case: just unfollow them.

It is pointless to go into discussion with them. They will never listen or change. They seldom admit their information was wrong and they never send tweets to correct previous ones.
What you can do is to answer an incorrect tweet with proven and factual information. For instance, when they use an old photo or video from a different country or situation, answer with a link to this old or incorrect information. It means the many unaware followers who read these tweets may slowly start to understand it's not a reliable source.

Also read my public apologies to Brad Cabana for calling him a Russian Twitter Troll.


level 4 - Professional Troll
These trolls have a really professional appearance with many followers, links to a professional website and have everything that makes it look very credible. These are carefully created profiles. Imagine... if they pay millions of dollars to keep an army going, why not spend a couple of thousands on credible looking online profiles to try to disrupt information that is not favorable to them?

After writing this blog (and having only up to level 3 Trolls met and described here) Mike Lee @AgronomyUkraine came along, a level 4 Troll: 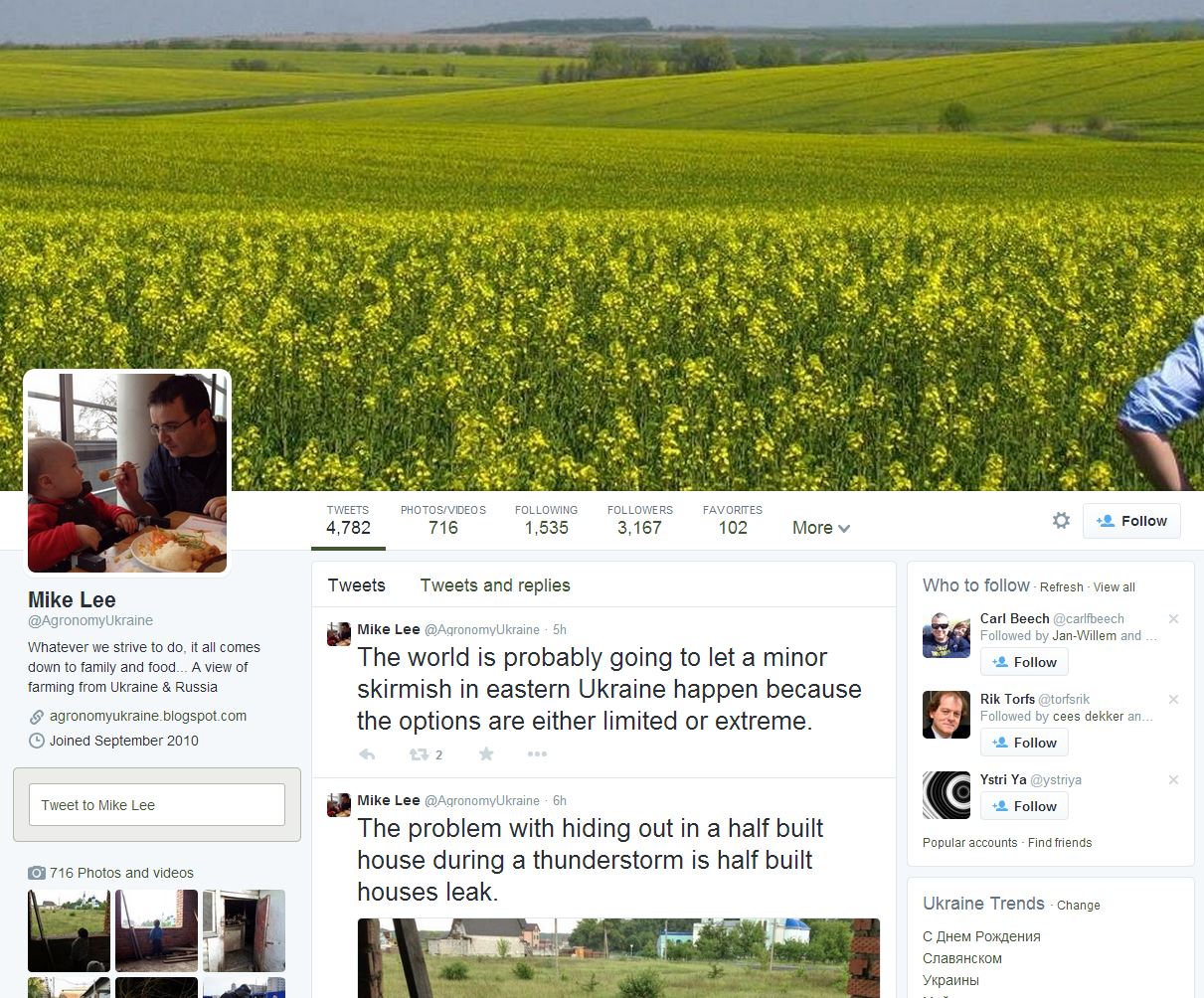 Here is the last part of the discussion with him: 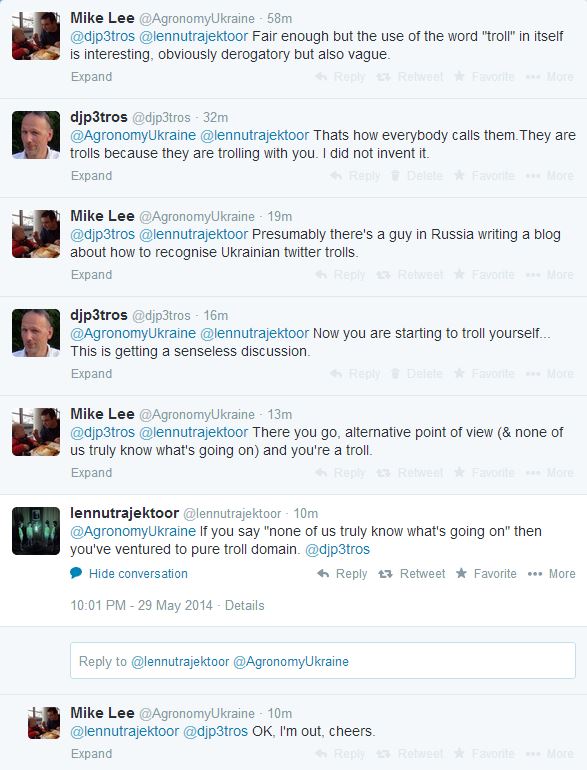 He is trolling!!! BANNED! Pointless discussions...

UPDATE 2-6-2014
I have looked deeper into the account of @AgronomyUkraine today and conclude now that he probably is ok. He might have dived too enthusiastically into a sensitive discussion at the wrong moment. And therefore we judged him too quick. Unbanned him :-).
This doesn't mean that such level 4 - Professional Trolls do not exist. Some of them are in scope, but we will need some more time and evidence to expose them.

Others
There are many other form of trolls of course. There are real people working behind these trolls, but the real ones are not just 'people with an opinion'. It is their deliberate job within the Russian propaganda machinery to disrupt a truthful representation in social media of what is going on.

Maybe we will meet a level 5 troll soon?


Level 10 - Real life Disinformation Trolls
These are the real life people. Believe it or not, basically all journalists working for Russian media fall into this category.

Nobody has seen ANY airstrike near Slavyansk and Kramatorsk so far, nor has anybody seen Grad launchers ANYWHERE in Ukraine. Yet she tweets such things constantly over the net. Sometimes accompanied by videos from other locations and events.
It is so stupid that it is hard to believe that this is really happening.

Basic rule for dealing with this: don't believe ONE SINGLE WORD they say, until it is verified by reliable sources.
Another rule: if you hear something outrageous, check if the source comes from Russian Media... if so, you can either go back to sleep again or turn to reliable media for trustworthy information.

It's not only what they tell, also what they DON't tell of course (about the 34 Russian Vostok soldiers that were killed during the battle for the airport of Donetsk):


Level 99 - Graham Phillips Troll
Another famous Russian Troll is GrahamWP_UK. He is a Scot working for Russia Today. He is actually more funny than dangerous, although the shortsightedness of many of his statements are mind boggling. He is so unique that he does not fit in any other category, so #99 is for him :-).
He is chasing gossip and rumors all over Ukraine and presents them as 'Facts' and 'The Truth'. But... because he is being cherished by the pro-Russians, he is allowed to come at places where other (more serious and suspicious) journalists can not come. This makes his videos from location quite informative. At the moment he is back in England though.

Just a rather random, funny, totally irrelevant tweet from him, that makes you sigh and laugh at the same time:

This seems to be a leaked payroll for Russian Trolls.
DER SPIEGEL has an interesting article about how Russian propaganda infiltrates German media.

Really? Does Putin have the right to invade the Netherlands because his daughter lives there?

What PR department did invent this line?

He said this in response to the woman asking for help. Wow... why not respect the international boundaries of countries? Especially from the country that Russia calls its brother... If you like Russia so much, move to Russia. Oh wait... you already live there...

Do you want to help spreading this Guide? You can just simply retweet this:


There is more to retweet: you can find my Top Ten here.