Empty Russian trailer near Millerovo evidence for transport of T-64Bs across Russian border.

Today this tweet appeared with a photo of a T-64B on a trailer, supposedly coming from Russia to bring a tank, probably from Crimea, to Ukraine:

The problem is: how do you know for sure AND this could be anywhere? Isn't it?

If we could find the exact location of this trailer, it would be much more helpful.

Look here to see how a column with three tanks traveled from Snizhne to Donetsk.

It is a Russian news item that claims that a Ukrainian BMP crossed the border into Russia and thus violated the border. Here are screenshots and guess what? There is our trailer!!! 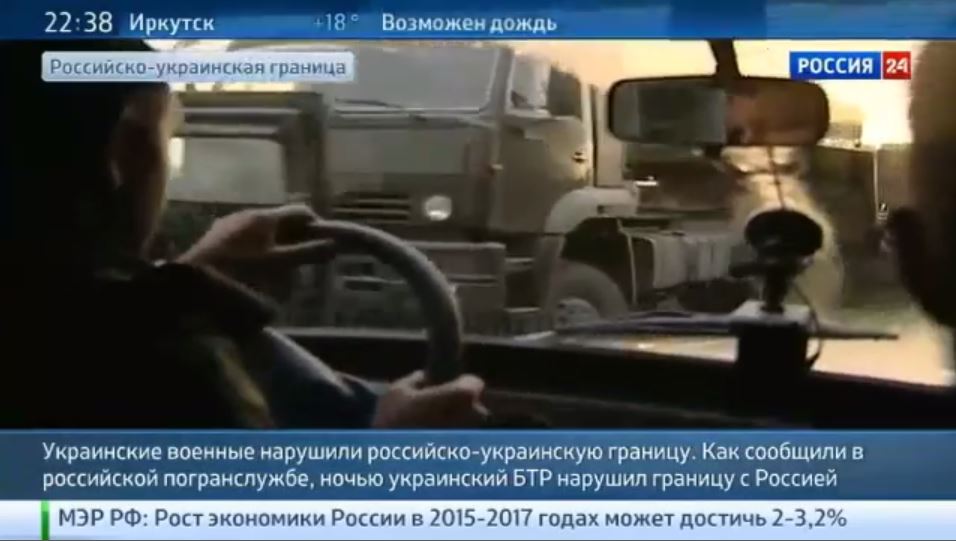 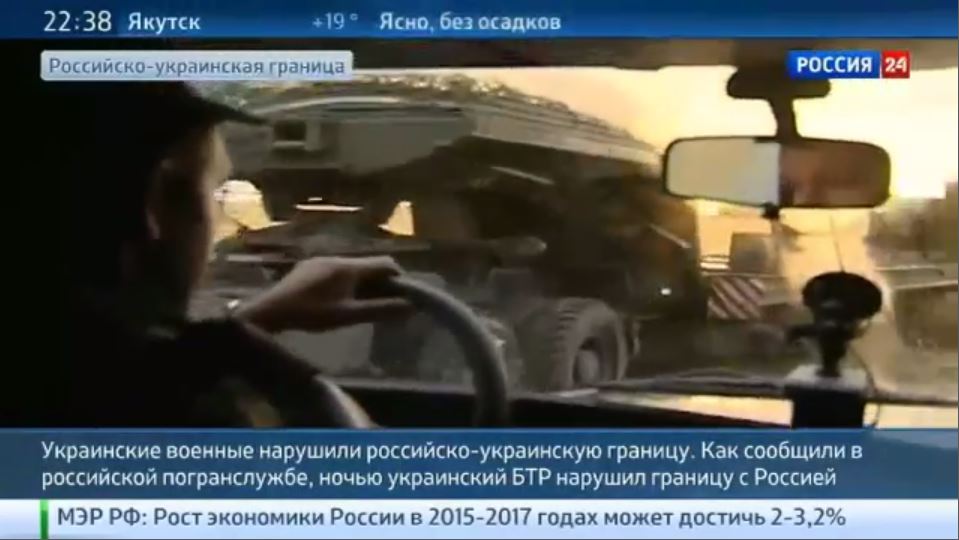 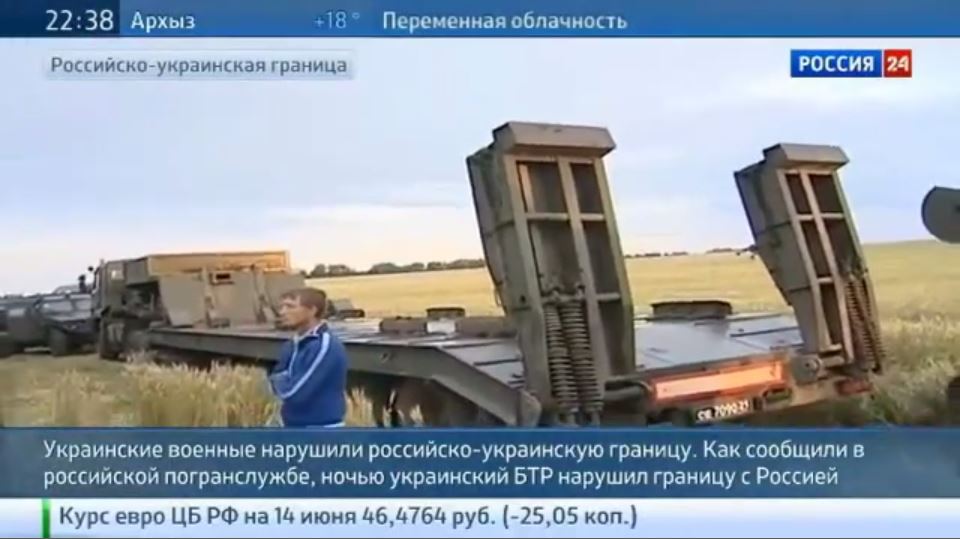 Interesting details is that the number plate is RUSSIAN... :-).

This is a Russian army number plate:

This is a Ukrainian army number plate:

This is the number plate on the trailer:

The location mentioned in the video is Millerovo.
That can be found here:

And this is EXACTLY in the area that would make an excellent drop-off point for transported tanks to the Ukraine.

Crossing #1 is Marinovka and is highly contested, but still in Ukrainian control. Impossible to cross here.
Crossing #3 is Dolzhansky. This one is (pro)Russian controlled. The problem with this entry is that it is a big crossing. When a trailer with tanks would cross there, many people would film it. And that would be a problem of course.
Crossing #2 Dyakove. (pro)Russian controlled and more like a trackway. Ideal for sneaking across the border unseen.

The claim that a Ukrainian BMP crossed the border here is really outrageous, because Russia controls both sides of this border :-).


Russian Army trained near #Millerovo in May, and now they found a Ukrainian BTR there? Give me a break. #Ukraine pic.twitter.com/Os43QGxxVp
— Jerry Popowicz (@JerryPopowicz) June 13, 2014

They TRAINED here!!! It means they knew the area. Familiar terrain. They trained to CROSS THE BORDER...

Now have a look at the BMP: 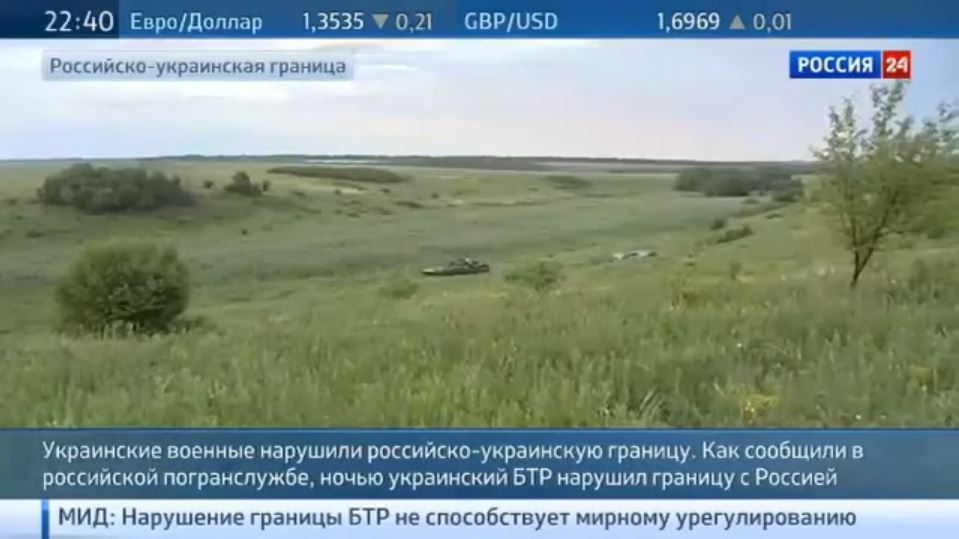 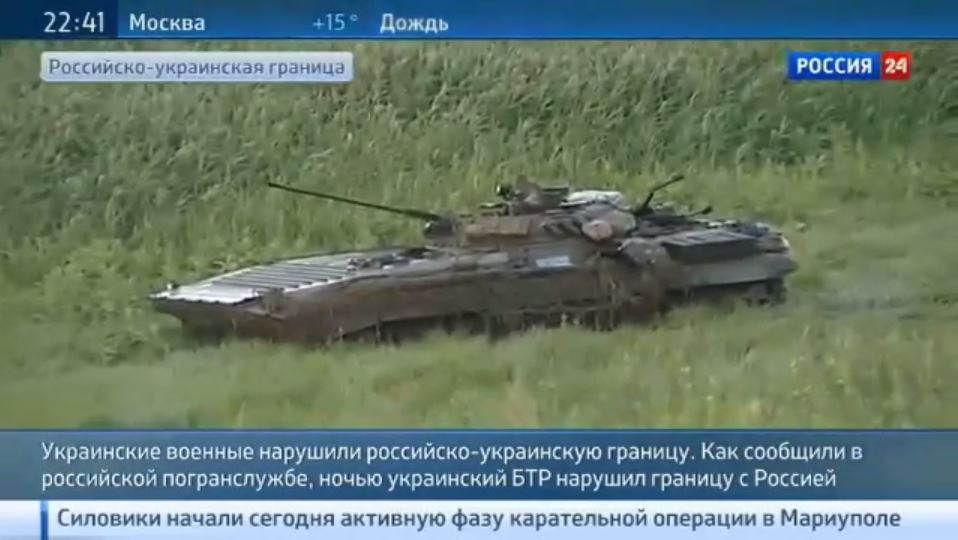 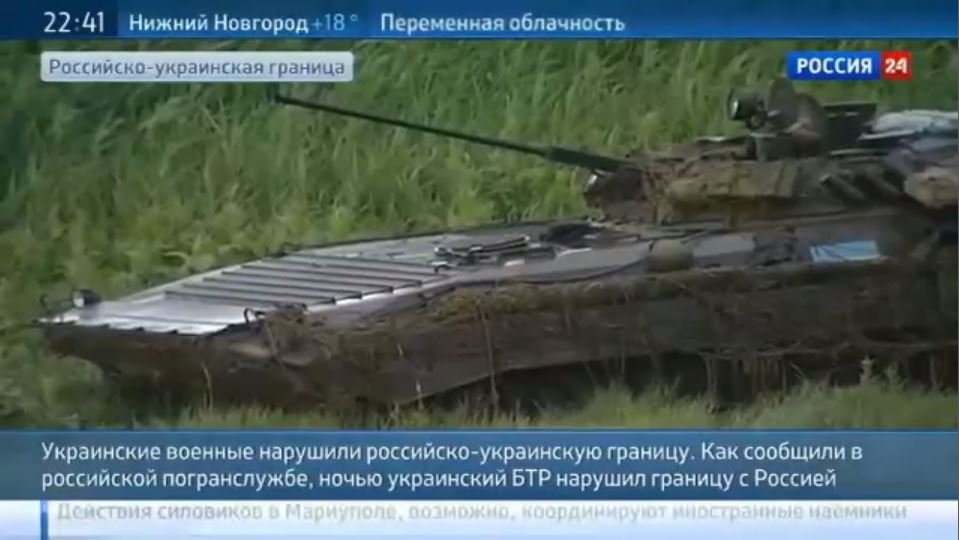 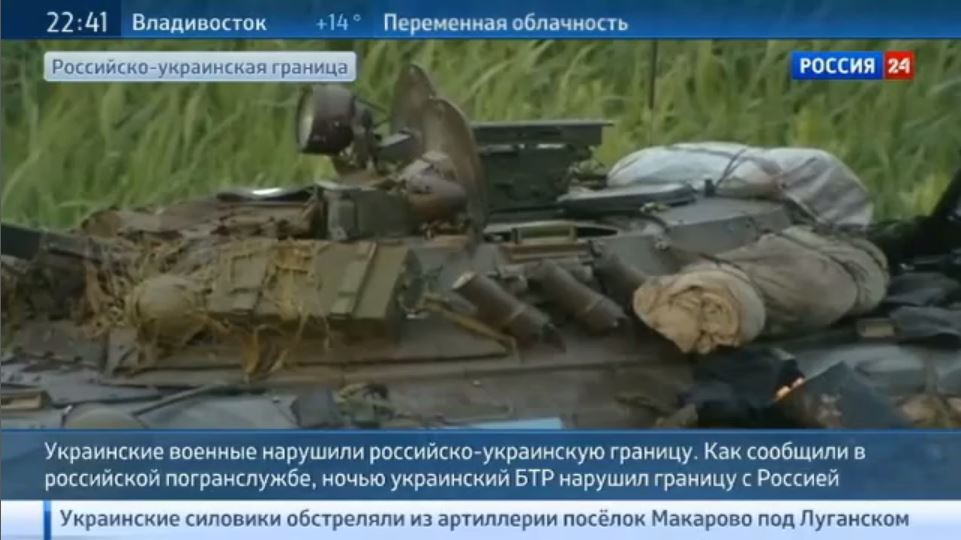 This looks EXACTLY like one of those used during the exercize.
Now look at this: 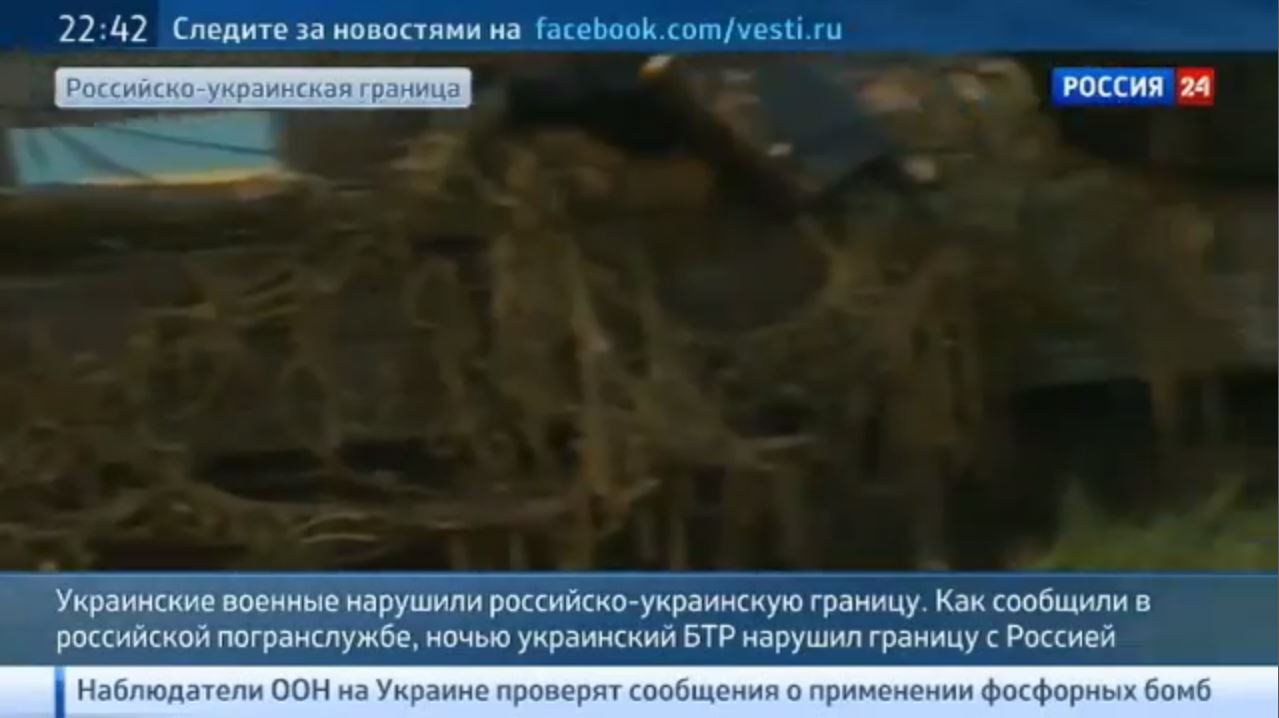 It got stuck. And this: 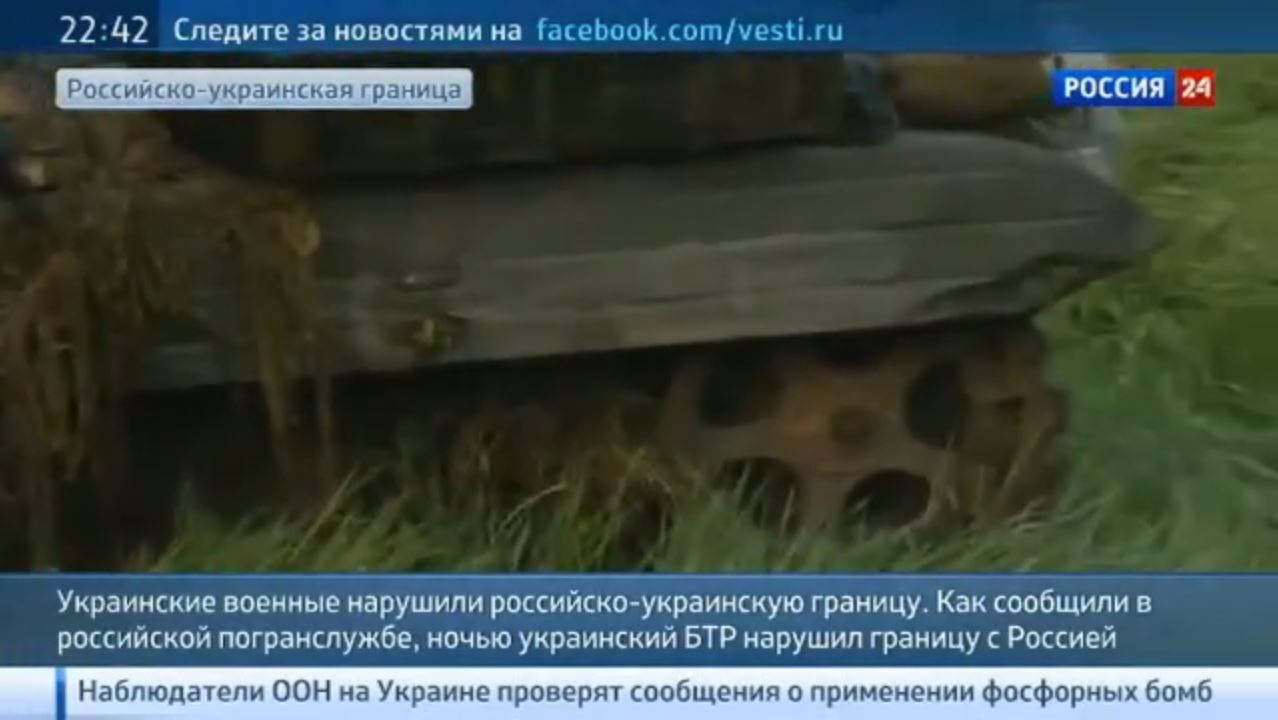 It is RUSTED!
It means this thing has been standing there for a while already!

In May the Russians trained in this area very close to the border. To do what? Training to cross of course.
One of their BMPs got stuck.
They send in at least one trailer with a T-64B to cross the border to Ukraine. The trailer is supposed to pick up the BMP and take it back. Meanwhile they seize the opportunity to make a story for Russian tv that a Ukrainian BMP crossed the border...

Also see All the evidence you need that three T-64Bs crossed the border.
Also see A T72 spotted and destroyed in Snizhne?
Also see Fresh convoy with three T-64Bs drive to Donetsk.
Also see the situation with the different border crossings.