This video is an interview with a supposed commander of the Ukrainian border guards who explains how Ukraine shelled it's OWN Border Checkpoint at Dolzhanskaya even while civilians were still there:

By now, when we hear a bullshit story like this, we should know it is fake right from the start, so I will not go deeper into that story itself. 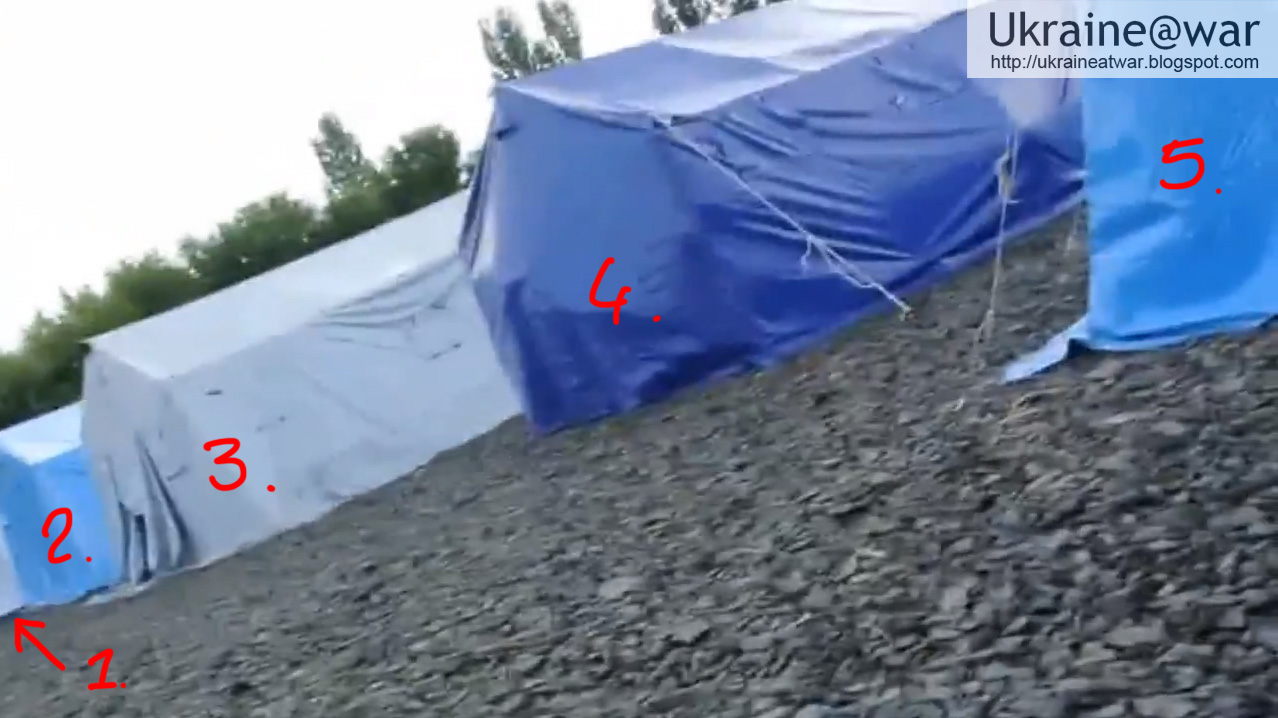 2. There is a tree line at one side.
As can be seen in the photo above.

3. There is a gravel base that looks very new.
No grass or plants are growing between the stones.
This shot shows it has a straight line on top of the soil beneath it: 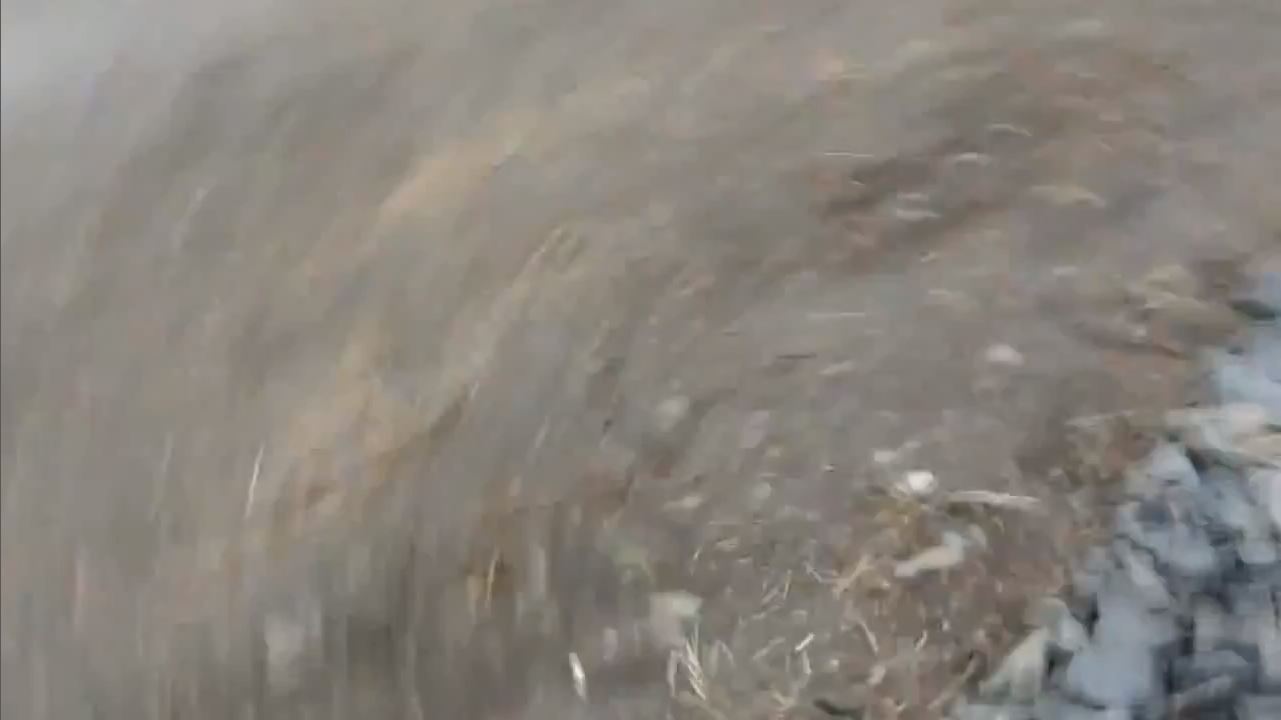 This screenshot is from the left of the guy: 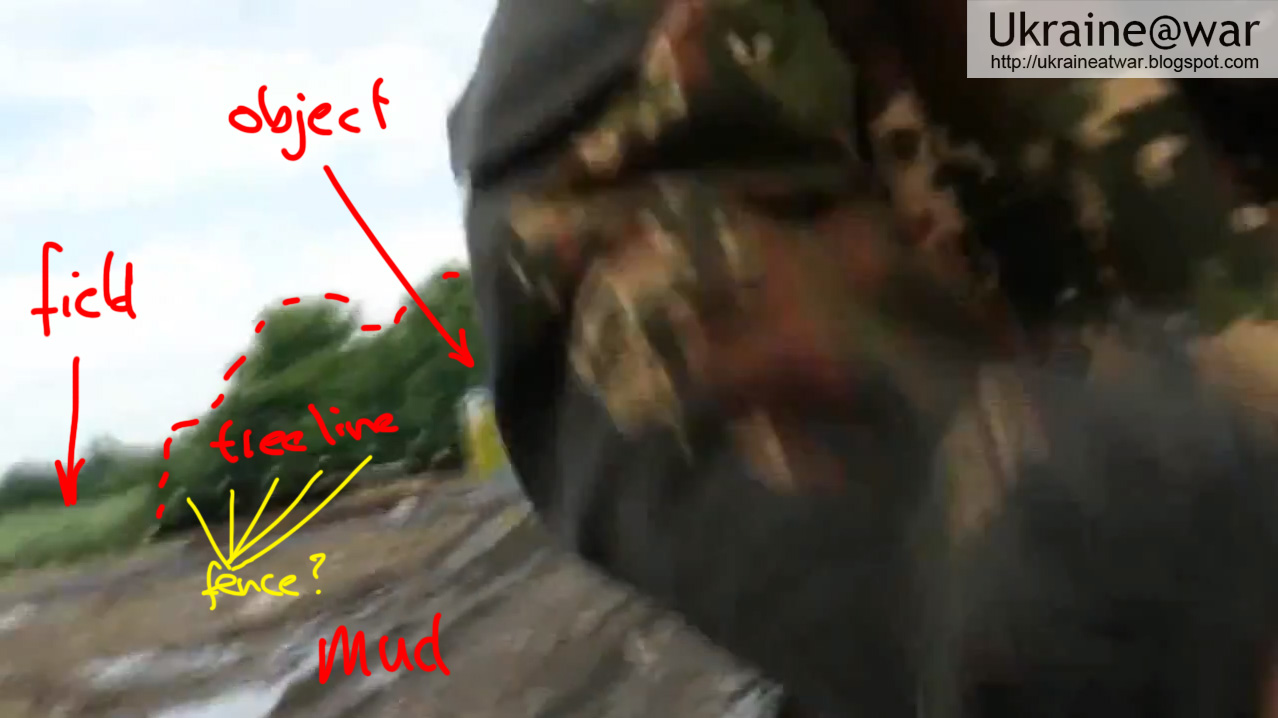 4. There is an area with mud

5. There is a field also with a treeline alongside it.

This screenshot is to the left of the guy: 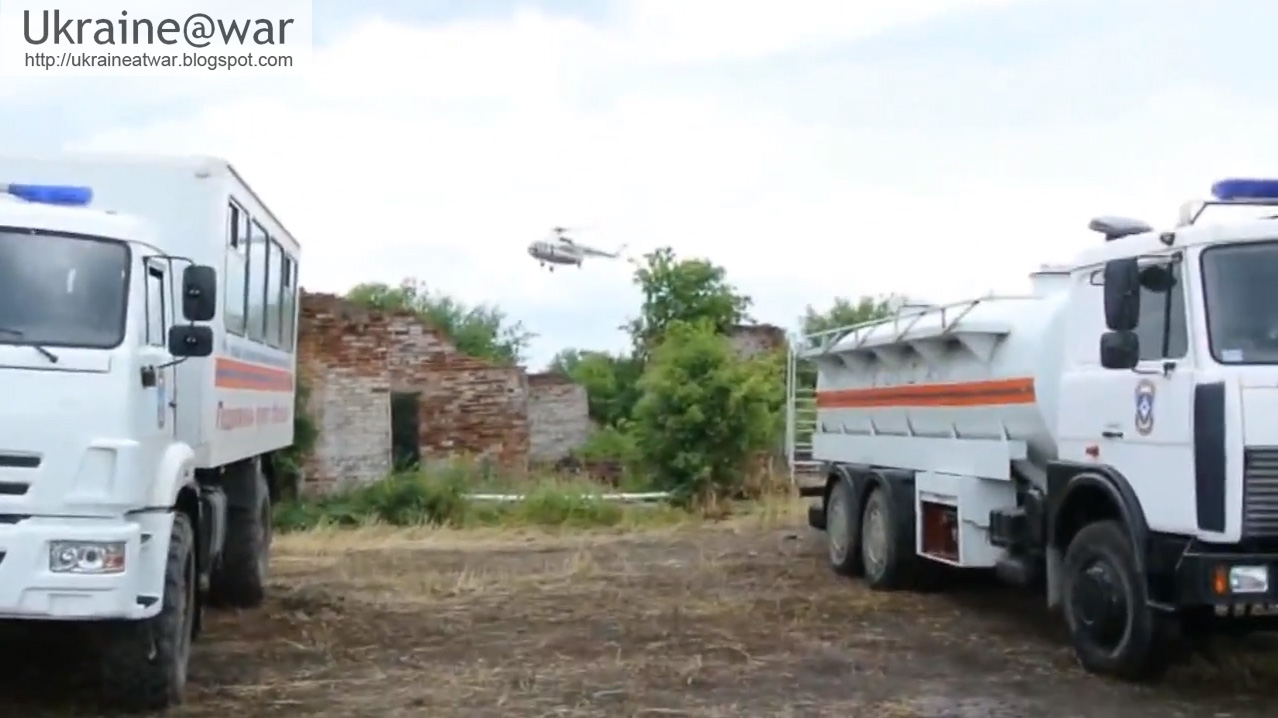 6. There are ruined walls.
It looks like a ruined house. The place must initially have been abandoned.

7. There is activity going on.
A helicopter is landing. The interviewed guy somehow has his residence here? There is a guy sitting and waiting in the truck.
So this is an ACTIVE, functioning, operational camp. 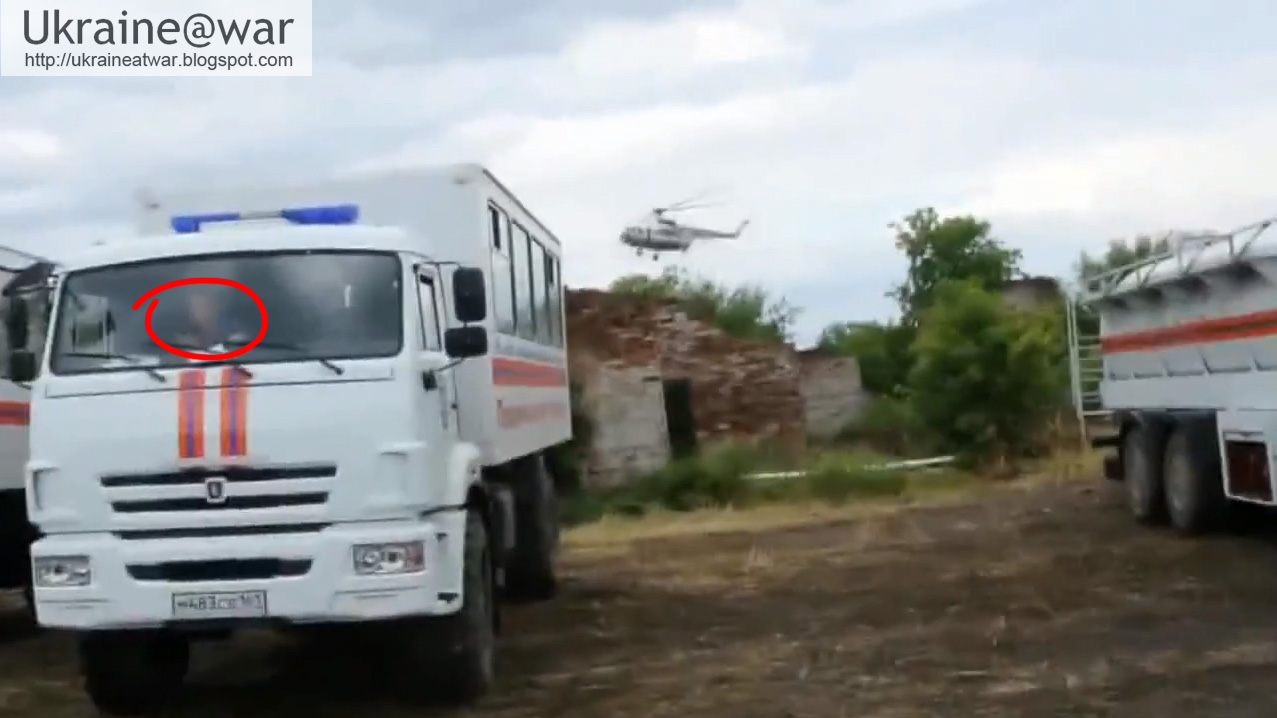 8. The trucks are RUSSIAN.
The number plate says: M483CB61. 61 is the region, which is Rostov oblast.
Info on Russian number plates can be found on this Wikipedia page.

9. The trucks and helicopter are from the Russian Federation Emergency Response Agency.
A Wikipedia page about this organisation can be found here.

On that page a very similar truck can be seen, with the same identification marks: 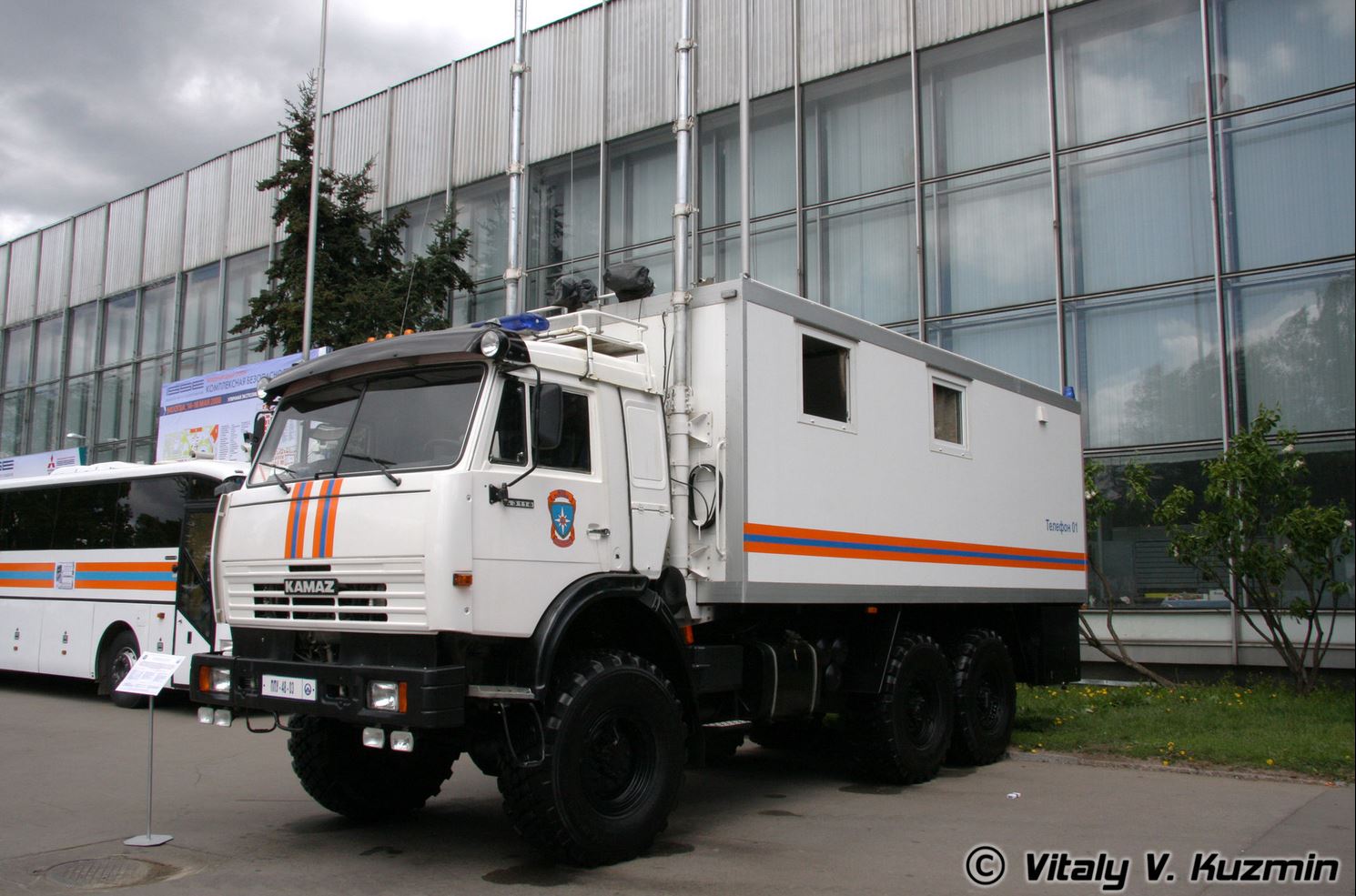 The Mi-8 transport helicopter on that page looks identical to the one landing in the video: 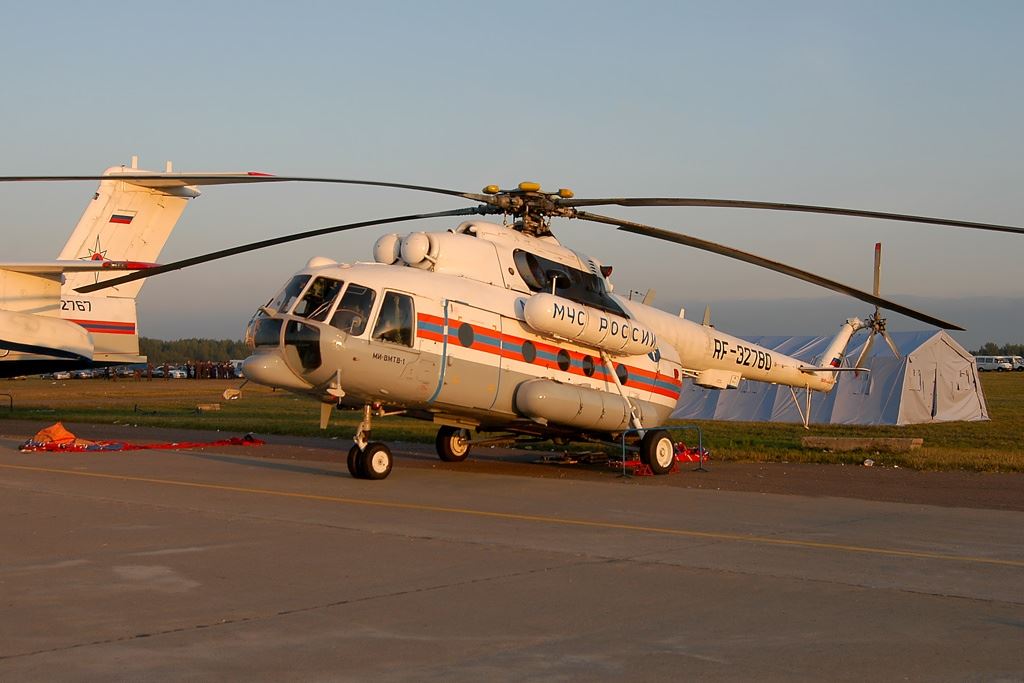 10. It is a MEDICAL camp.
ERA is for emergency and rescue operations. This is for medical issues.

11. Behind the ruined building is a place for a helicopter to land.

13. The camp is somewhere close to the border with Ukraine.
Or to put it simple: where else should it be?
To be more precise: there is a rebel soldier in the camp! His presence and his supposed involvement with the shelling of the border post is a clear indication that this camp is close to the Ukrainian border.


Conclusion:
There is a newly build, active Russian medical emergency camp close to the border with Ukraine, where wounded soldiers can be taken to. There they can get an immediate treatment in a mobile emergency fascility and if necessary they can be flown to a Russian hospital with a helicopter.


The exact location and size at the moment is hard to determine. Neither whether this is ONLY for medical purposes. We are currently investigating the possible options for the location.


Of course the Russian Trolls will argue that this is a refugee camp. Well...

If anybody can give any more information about this, please let me know.
Posted by Ukraine@war at 3:48 PM