My public apologies to @BradCabana for calling him a Russian troll

@BradCabana discovered my blog about Russian trolls, where he was called a 'disinformation troll' by me, because he was sending real information mixed up with Russian propaganda. Of course he was outraged and he send me these messages: 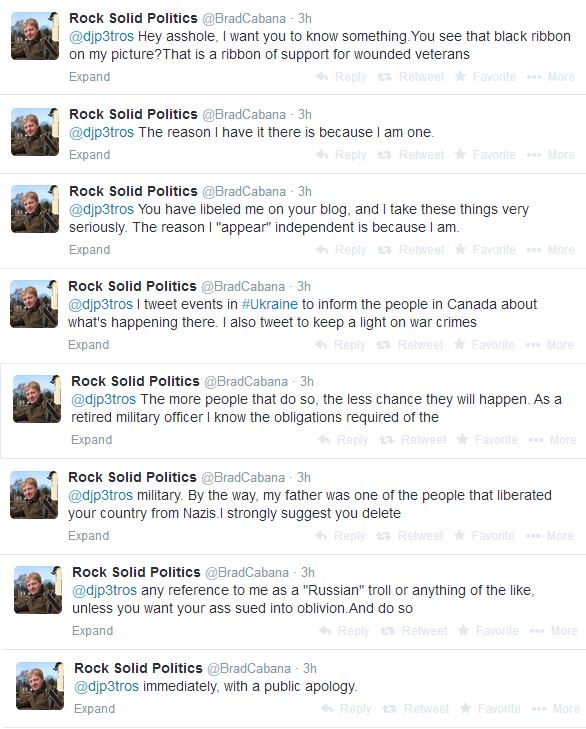 Ok, BradCabana. I understand that you are upset, because I expose you. So here I have 5 random 'apologies' taken from your tweets that prove that you are a liar and are misinforming the public: 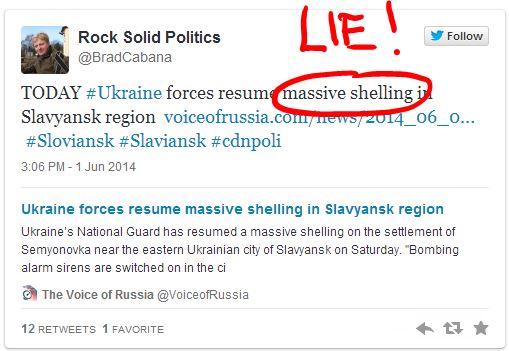 This is a lie because there is no MASSIVE shelling by the Ukraine army going on. For a detailed account of the shelling that the Ukrainian army is doing look here.

This is just an outright lie. If the Ukrainian army would use GRADs there would be tons of videos on social media where we can see transports, firing and aftermaths of such attacks. There are NONE!

This is just stupid and outrageous. Ok, you use the word 'possibly'. Do you know what that makes this? Gossip. You are sending GOSSIP to the Canadian people.

Sigh... really! Oh wait... you say 'UNCONFIRMED'... right. Then it is just plain out gossip. On second thought... it is just a lie. An UNCONFIRMED lie though.

Self proclaimed Slavyansk mayor himself is a liar & murderer and kidnapper of people. You cite him. He is an unreliable source. It is a lie. Nobody has seen that many dead Ukrainian soldiers. And neither are they 'buried in the woods'.

So, mister @BradCabana. I hope you will accept my apologies!

And I want to add the following things to this:


In response to which BradCabana send me this tweet:

It means the persons running this account have decided NOT to sue me (What a relief! Didn't see that one coming). And he has also blocked me.
It means I cannot reply to his lies anymore and warn his percentage of unaware Canadian followers of the misinformation that he is sending out. BUT YOU CAN, my dear 198 followers!!! Please reply to his tweets or account things like this:

Let's see what happens next...
(My prediction is that he will still GAIN followers, because they will try to counter this by having more trolls and fake profiles follow him. That's ok. As long as the real & unaware followers unsubscribe.)

UPDATE:
@titaniasgarden1 pointed out that Brad Cabana is a public Canadian figure. Dived into it and Found a facebookpage of Brad Cabana without all the propaganda, but also with links to his blog.

I wrote to his blog and he replied, meaning the facebookpage, the blog and twitter account are all connected.

There is a possibility that his twitter account has a script connected that automatically feeds his account with Rprop. It seems unlikely that he is researching all these tweets himself all day long. Why would he do such a thing? You may guess...

Alternative:
Their is a chance of course that both blog, facebook page and twitter account are an identity theft, where the real Brad Cabana does have neither of them and is unaware of it.