A lot of messages came in of Russian units infiltrating the Ukrainian border today.

This map shows what we know: 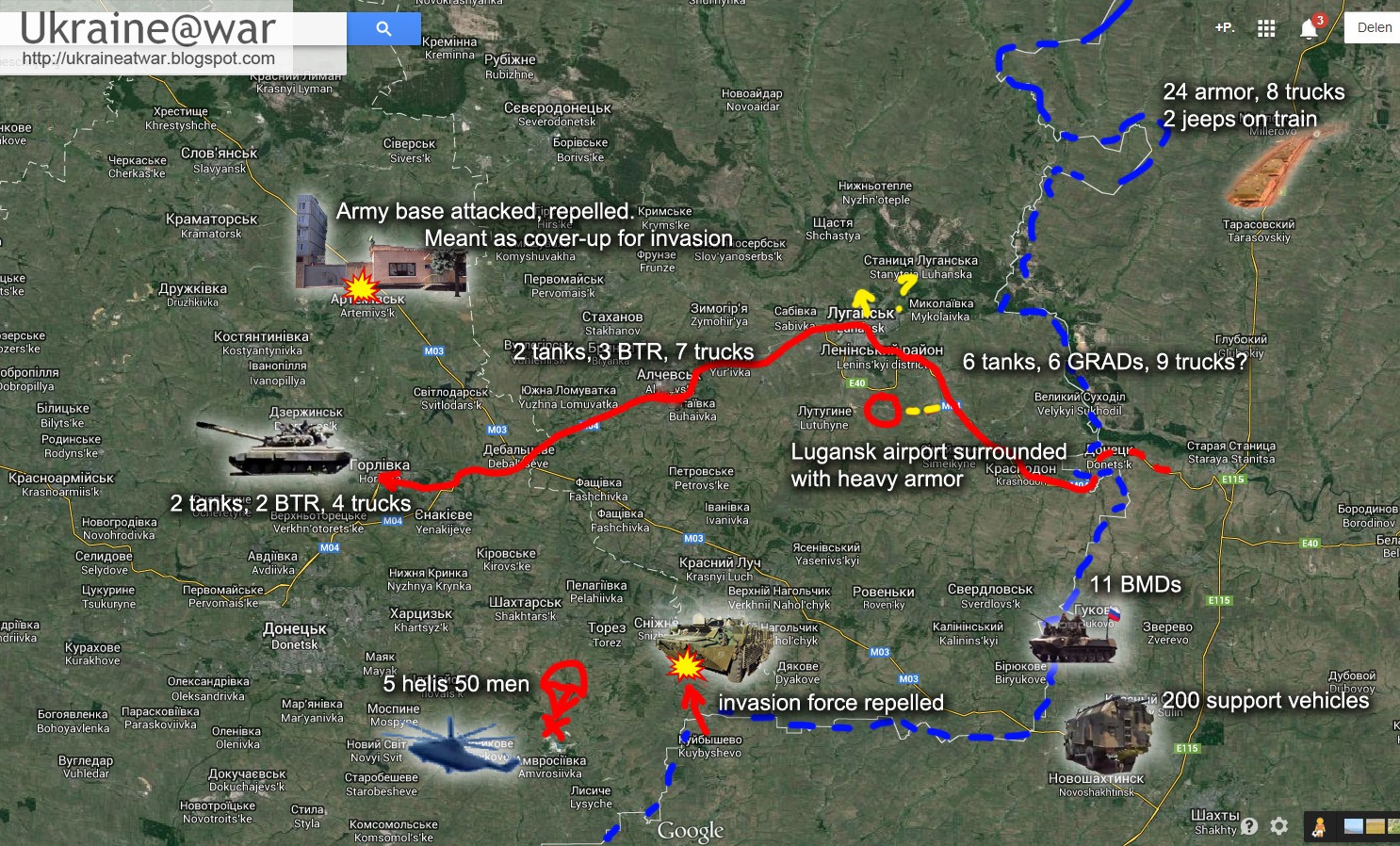 A.
An invasion column of initially 42 vehicles entered Ukraine at Krasnodon, traveled through Lugansk and ended up in Horlivka. On the way it may have split into smaller units.
See this link for: all the spotted locations and consistence of the columns.
Last sighting has been in Horlivka.

B.
Last night he army base at Artyomosk has been attacked, but it was repelled. It is the biggest tank depot in Europe. This was meant as a cover up, so Russia could say the invasion vehicles were captured from the army base.

Military base in #Artemovsk near #Donetsk attacked last night. You can see RPG (?) impact in gate pic.twitter.com/QjrC3ohosa
— Will Vernon (@BBCWillVernon) June 20, 2014

D.
A train with dozens of tanks, armor and trucks has been spotted in Millerovo (24 tanks and other armored vehicles, 8 trucks and two jeeps):

These for sure are spotted in Millerovo:

E.
Lugansk airport has been surrounded by heavy armor.

All the on June20 arrived #RUS heavy armour is reinforcing southern side of #Luhansk,airport is completely surrounded pic.twitter.com/MhZa7viH3d
— lennutrajektoor (@lennutrajektoor) June 20, 2014


F.
Helis have been seen flying towards Ukraine and reported to have landed at Amvrosiivka


G.
An attempt to cross the border at Marinovka has been repelled.


H.
Earlier on June 15th some 200 vehicles already have been spotted in Novoshakhtinsk. Most of them were support trucks. See this article.


Are we really going to let Russia take whatever it wants?


Write your governments, they have to act to stop this insanity! #russiainvadesukraine
— ConflictReporter (@MiddleEast_BRK) June 20, 2014


People: THIS IS JUST THE BEGINNING! There are many more troops right at the border. Putin will send as many as needed and circumstances allow. BUT HE WILL NOT STOP, because he knows NOBODY IS GOING TO STOP HIM.
USA: powerless and indecisive right now.
Europe: divided and too many economical ties with Russia.
NATO: trying to stay out of the conflict.
Ukraine: very unexperienced and still corrupt/unmotivated in large parts.


Also see: My interpretation of these events.


(If you have corrections or additions, please let me know.)